Let's be clear about two things: 1. I am a tech luddite; 2. I, coincidentally, grew up broke playing with sticks and rocks, and galdang it I liked it. Resultantly, I view expensive high tech toys with both skepticism and romanticism. That in mind: I covet this toy series, I want it to get funded, I'm begging my mom for one, and I would like to subscribe to its newsletter. 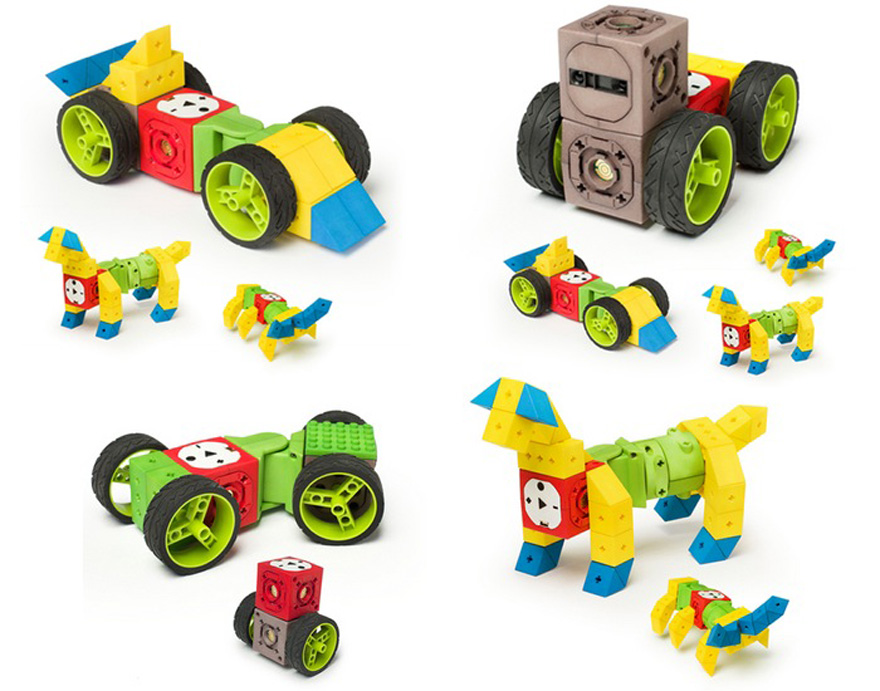 TinkerBots are reconfigurable, programmable, kinetic toys. The block-based sets use a central "Power Brain" cube that provides power and an arduino-compatible microcontroller. Snap in a variety of mobile and immobile pieces and expand your robotic object in a myriad of ways. Depending on the set, you can control a vehicle by bluetooth, mobilize an animal, teach it new moves, add proximity sensors and grabbing claws... They tout the capability of being a "living Lego" set, and have even designed in actual Lego compatibility. They're a little less versatile than that plastic block titan, but hey, baby steps. More importantly, you get a little modular robot with no wiring or programming needed. One of their goals is to adapt the system to use as a quadcopter. Teach your progeny about programming and the sinister future of drones in a single go!

Check out the campaign video:

However, you can build on the programmable side if you feel like it. Being arduino-friendly, they suggest that these toys would be good classroom aids for fledgling programmers. I'm inclined to agree. Digital literacy needs to start young, but (as folks who know about brain development will crankily attest) physical/tactile interaction is absolutely vital to kiddo growth. While problem-solving can move digital, you can't replace the value of gaining coordination and reasoning through play activities like building. Kids (and arguably adults) need more 3D play and less 2D screen time, and these blocks might be a nice balance between the two. Toys that you can grow with are pretty rare, but an increasingly adaptable, programmable building set is a good contender.

There are more modular robotics toys coming out all the time, just do a search for "modular robotic toy" and you'll have some decent options. Another cool recent one is Moss. Think these are a good use of kid-tech? Found anything better?