Eric Trine on Transitioning From Fine Arts to Design, Being "the Metal Guy," and How Instagram Drives 75 Percent of His Sales 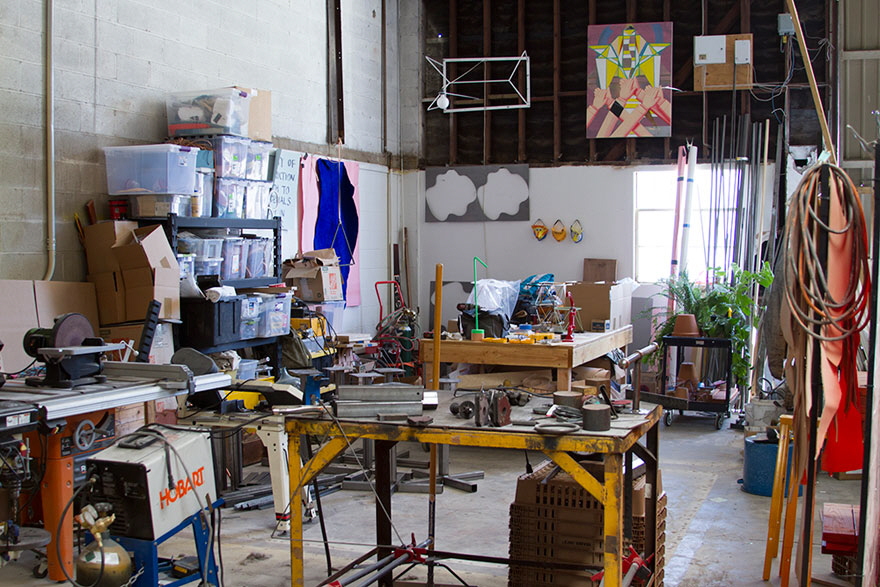 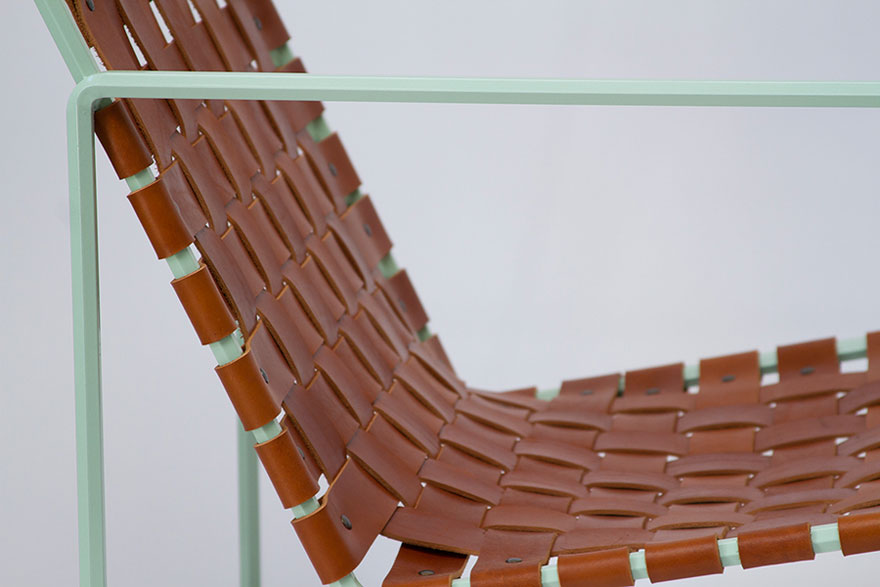 This is the latest installment of our Core77 Questionnaire. Previously, we talked to Inga Sempé.

Current projects: Right now I'm gearing up for New York Design Week. I'm doing a new version of my Rod+Weave chair with a brass-plated frame and dyed-blue leather—it will be like an Yves Klein blue, super-vibrant. And then I'm working on a collaboration with a fashion designer and illustrator named Ellen Van Dusen; she's making the fabric for a new chair that's in the works.

Mission: Taking the pretentiousness away from high design and making it more accessible to a broader audience. And also just being in people's homes with the work that I do—the mission is not to be in a design gallery or the MoMA gift shop but to actually get into people's living spaces.

When did you decide that you wanted to be a designer? When I started transitioning out of a fine-arts, sculptural practice and started making things for myself. About five and a half years ago, my wife and I got married and moved into our first place. I've always had "maker's chops," so I taught myself how to weld and I started making all the furniture for our place. That turned into making stuff for friends, and then it was friends of friends of friends. It just kept snowballing. And I recognized that there was something in me that was activated through more of a design practice than a fine-arts practice. But I'm still realizing that I want to be a designer; I'm still figuring it out.

Education: I got a B.F.A. in interdisciplinary art, and my thesis was sculptural—I made this house on hinges and wheels that could fold into 434 different positions. So even in undergrad I was talking about themes of the home.

Then for graduate school I went to the Pacific Northwest College of Art, in Portland. The program was called Applied Craft and Design. I was looking at schools that were in between industrial design and a traditional M.F.A.. I know I don't want to be a craftsman, and I don't want to be a fine artist. Design is somehow hovering in between those spaces; it can pull from each of those traditions, but it has, I think, a clearer set of criteria.

Who is your design hero? Russel Wright. I discovered him completely by accident. I found a set of four folding chairs that he did for Sears in the 1940s or '50s. I got them for $15 each and I posted them on my blog, and someone was like, "Where did you find those Russel Wright chairs?" And I was like, "Who the heck is Russel Wright?"

So I looked him up and then continued to study his work. He's my hero because he had a strong connection to the consumer culture and broader culture of his time. The dinnerware that he designed in 1937 is still the best-selling dinnerware set in American history. It's called American Modern. Nailing that design and making it so amazing and successful and accessible that it was literally in every home in America—I love that.

He also wrote this book with his wife called A Guide to Easier Living, talking about the benefits of modern design in an almost theoretical or conceptual way. One whole page is dedicated to a quicker way to making your bed. So design for him was really connected to improving your life, and not improving it in a status kind of way but actually improving the way that you interact with your space. 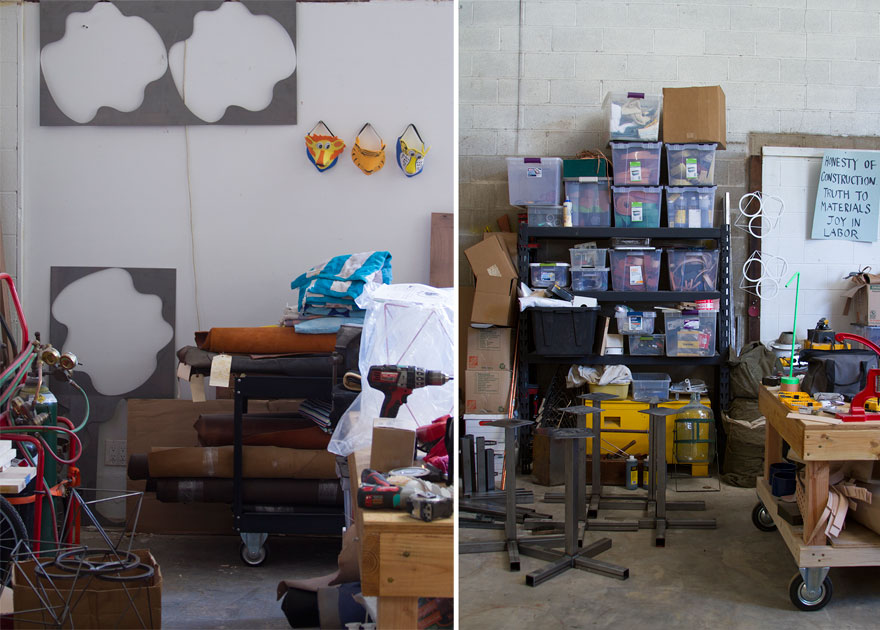 Describe your workspace: It's a 3,800-square-foot space in Long Beach that I share with a woodworker and another design studio called Camp Design Group. There's a dedicated design office that Camp occupies and about a 2,000-square-foot workshop, and then I have 1,200 square feet of dedicated studio space. I'm kind of "the metal guy." I have a full metal shop, and then piles and piles of projects and prototypes and weird stuff everywhere. The woodworker has the cleanest shop I've ever seen, and then my space is affectionately known as Tijuana. It's a total mess all the time. It looks like I'm a toddler with a big toy box. But it's productive.

Other than the computer, what is your most important tool? The first thing would be my welder. But the second thing would be my iPhone and Instagram. I'm a hyper-poster on Instagram. A lot of times I'll stick something together in the studio and then I'll put a piece of colored posterboard behind it and shoot it and post it, and then see what people have to say about it. And then I might go, "Oh, OK, that's pretty good."

Instagram has been huge for me; it drives probably 75 percent of my sales. When I released a new copper version of my chair, I already had sales just from people seeing it on Instagram—like, people who immediately e-mailed and said, "Hey, I want to buy that chair. What's the price on it and can you ship it to Florida?" It's a little baffling because, you know, it's a two-inch-by-two-inch photo on someone's phone of a chair that they've never sat on, and they're ready to drop two grand on it.

What is the best part of your job? One is the location—I'm a mile from my house, which is really great. And the other is creative control. Being able to run my own studio and have the ability to say yes or no to any project that I want, and not having to say yes to something because my boss wants me to do it.

What is the worst part of your job? The administrative and financial side of things. A lot of my work up until now has been custom, and I'm shifting out of that to developing more product lines. I'm starting to work with manufacturers to get some stuff off my plate, but the logistics of managing production and inventory takes a lot of time, and it potentially takes time away from the fun stuff.

What is your favorite productivity tip or trick? Lately it's been getting the production work—the work work, the manual work—done before lunchtime. If I get into the studio and I crank from 8:30 to 12:30, four hours, and that's the first thing I do, I am so much more productive. Then after lunch I can do e-mails and lollygag or whatever.

What is the most important quality in a designer? Integrity. Specifically, I'm thinking of integrity in terms of building relationships along the entire design process. There are all these people who are involved in making these things, and I think keeping in mind all those relationships all the way down the line to the end user is really important.

What is the most widespread misunderstanding about design or designers? That there are things in life that aren't touched by a designer. There's a misunderstanding in thinking that design is this small set of people who wear interesting eyeglasses and think about very esoteric things. In fact, almost everything that we encounter is touched in some way by a designer.

What is your most prized design possession? I have a collection of vintage patio chairs, which is how I caught up with Russel Wright. And I have four of these original Wright molded patio chairs that he did for Sears that are really special to me.

What is exciting you in design right now? I just came back from the Architectural Digest Home Design Show in New York. I was participating in a section called Made, which is basically for folks who make their own stuff, and what's exciting me is these young designers who are finding that hybrid of what I would call the New Studio-Design Movement. It's where design and manufacturing, the majority of it takes place within your own workshop instead of being outsourced. And what is outsourced is done locally, often taking advantage of manufacturing capabilities that are just sitting there, kind of dormant. I love that hybridity of manufacturing yourself plus outsourcing locally.

If you could redesign anything, what would you choose? My wife and I are remodeling our bathroom and there's a lot of stuff that's been very frustrating. A lot of it has had to do with faucets. These are things where anybody should be able to understand how to use them immediately, but they're just so poorly designed. So I'd want to make faucets really simple and understandable.

What do you hope to be doing in ten years? I hope to have the product design side of my practice developed and self-sustaining. And then I'd like to have a retail store that has my products but where I can also give young, independent designers an opportunity to get their stuff to the consumer.

Eric Trine on Transitioning From Fine Arts to Design, Being "the Metal Guy," and How Instagram Drives 75 Percent of His Sales