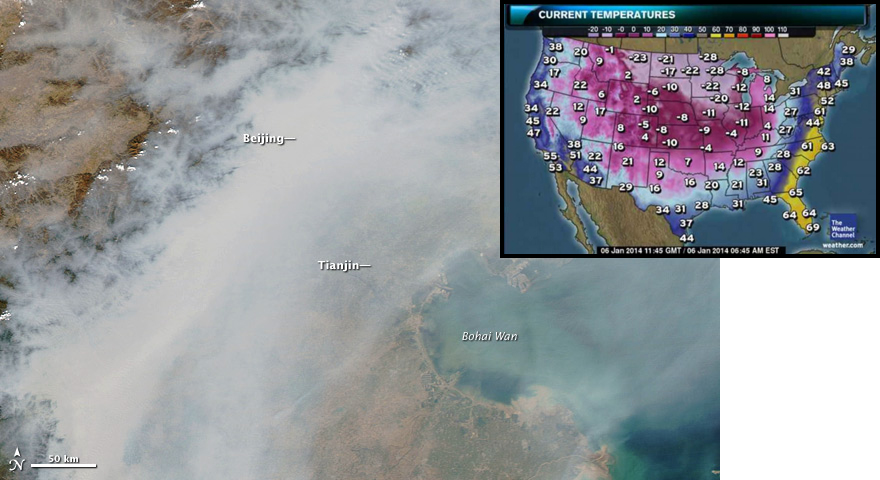 Had the Industrial Revolution never happened, there'd still be doctors, lawyers, farmers and merchants—but there darn sure wouldn't be any industrial designers. It's a bit of a shame that the event that enabled our very profession caused such widespread pollution, but we didn't understand the environmental effects back then, and even if we did it wouldn't have stopped men like Carnegie and Loewy.

Now that we are grasping the environmental effects of pollution, what we're learning is staggering. A new study published this week posits that pollution from Asia's industrial boom is affecting the weather in North America. The study, performed by NASA's Jet Propulsion Laboratory and reported by Live Science, finds that "Pollution from China's coal-burning power plants is pumping up winter storms over the northwest Pacific Ocean and changing North America's weather."

"The increasing pollution in Asian countries is not just a local problem, it can affect other parts of the world," [lead study author and atmospheric scientist at NASA's Jet Propulsion Laboratory Yuan] Wang told Live Science. ...Wang and his co-authors examined how the tiny pollution particles in Asia play a role in cloud formation and the storms that spin up each winter east of Japan, in a cyclone breeding ground north of 30 degrees latitude. Monsoon winds carry aerosols from Asia to this storm nursery in the winter.

...The new study finds that sulfate aerosols are among the most important drivers of Pacific storms, by encouraging more moisture to condense in clouds, Wang said.Pollution from Asia is also changing weather patterns over North America, Wang added. Wang said this winter's unusually cold weather east of the Rocky Mountains could have been influenced by pollution-driven cyclones and high-pressure systems in the northern Pacific. These Pacific weather patterns caused swoops in the jet stream that drove cold air south across the central and eastern United States—the so-called polar vortex. The same weather patterns are linked with record-high temperatures in Alaska this winter.

"This cold winter in the U.S. probably had something to do with stronger cyclones over the Pacific," Wang said.

This begs the question: Did the Industrial Revolution in America change the weather in Europe, and did the UK's change the weather further east? Or does an industrial boom have to be on the massive scale of China's to affect the weather? Kind of makes us wish modern-day scientists had access to accurate weather data from the 1800s. But in any case, given that the previous two Industrial Revolutions have passed and China's is current, it seems they will be the unlucky ones to draw fire should the study prove accurate.