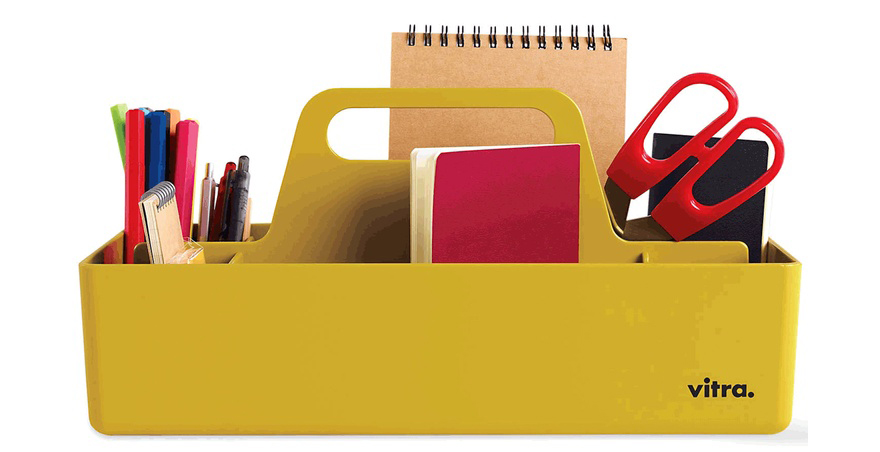 As I work with clients to organize their offices, I often see them scramble to find everyday things such as pens, paper clips and sticky notes. That's one of the first things we fix, since it's a basic organizing principle to keep often-used items close at hand. And using the proper containers for those items makes them easy to grab when needed.

Especially if the desk does not have a pencil drawer, end-users will want to keep these frequently-used items on their desktops, in some form of desk organizer. Some of these organizers are a single piece, such as the Toolbox from Vitra, designed by Arik Levy. This design is nice for end-users who move between multiple work surfaces—or who work on something like the dining room table, where the desk supplies need to be removed when the table is used for other purposes. The Toolbox also could be used for plenty of other things if needs change and it's no longer needed as a desktop organizer. It's made from ABS plastic. 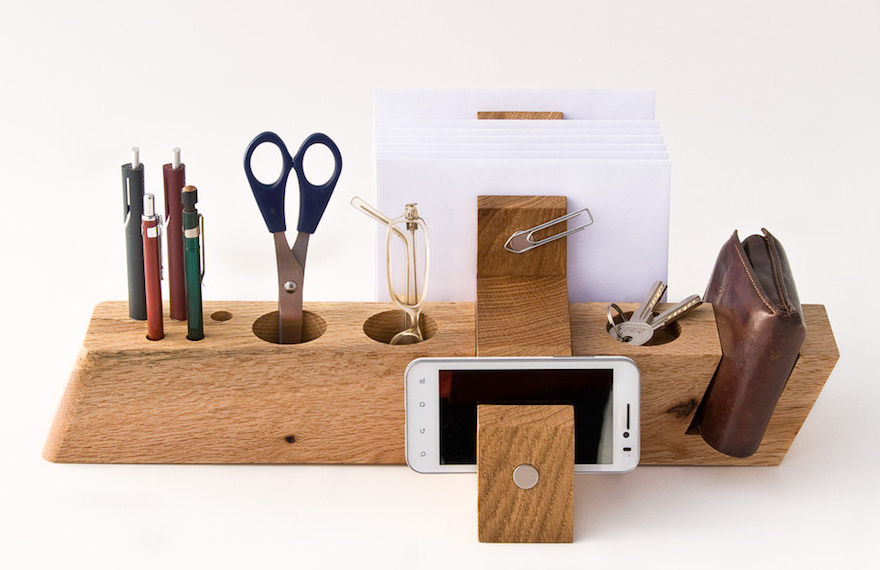 This desk organizer, from Less & More, consists of two pieces that join together. One piece has holes of various sizes, plus a compartment that would hold a wallet or something of a similar size. The second piece has slots to hold paper and notes, a separate slot that's the right size for a cell phone, and two magnets to hold a few paper clips. Here we see the space-vs-storage tradeoff: This organizer is 10 inches deep (compared to the Vitra toolbox, for example, which is 7 inches deep), which will be too large for some end-users. And the design creates some hard-to-use space in the areas to the left and right of the piece storing the papers and the cell phone—fine if you have space to spare, but not if desktop space is limited.

In comparison, this single-piece wood block desk organizer from l'Atlier d'Exercices is more compact, at only 2.25 inches deep, but it stores much less. There's one hole for pens, and five slots for papers—but nothing for items such as paper clips. 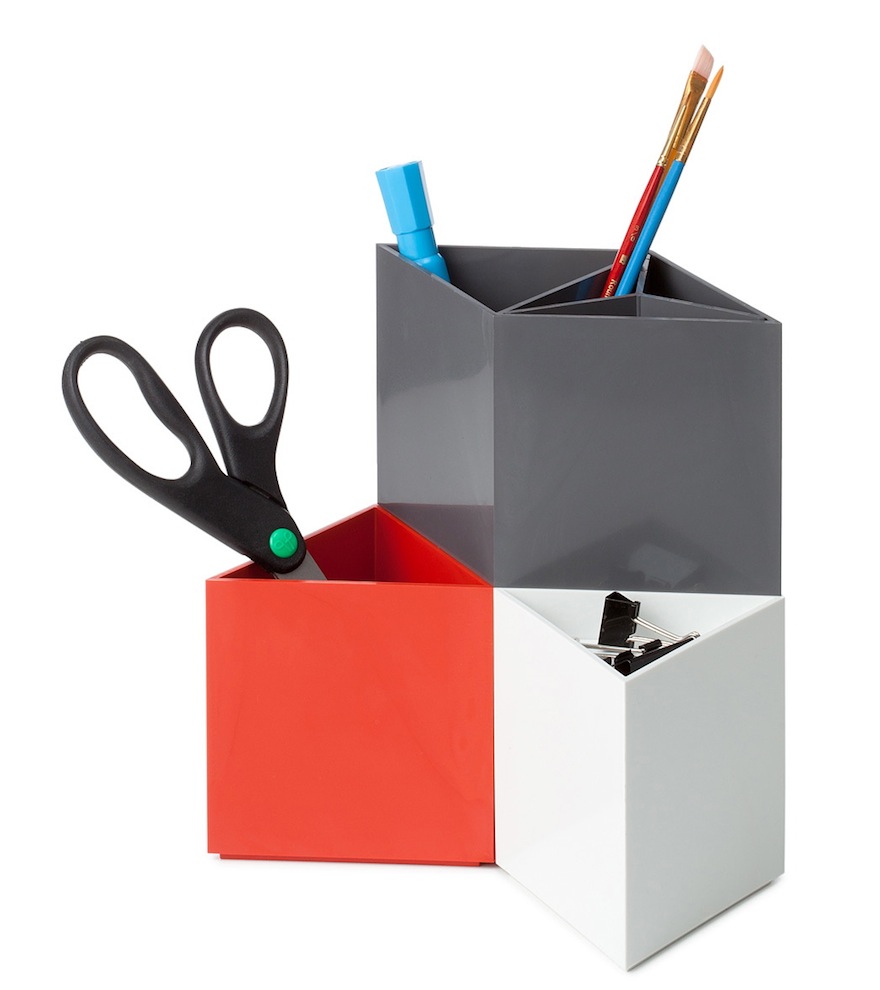 Other desk organizers are modular. These are the Rhombins from AMAC, designed by Eric Pfeiffer and Scot Herbst. Each of the three rhombus-shaped modules has a divider inside to separate items kept within. All sorts of configurations are possible, including a stacked one to save space—although that means the end-user needs to unstack them to get at certain things. The Rhombins are made of Cereplast, a plant-based bio-plastic. 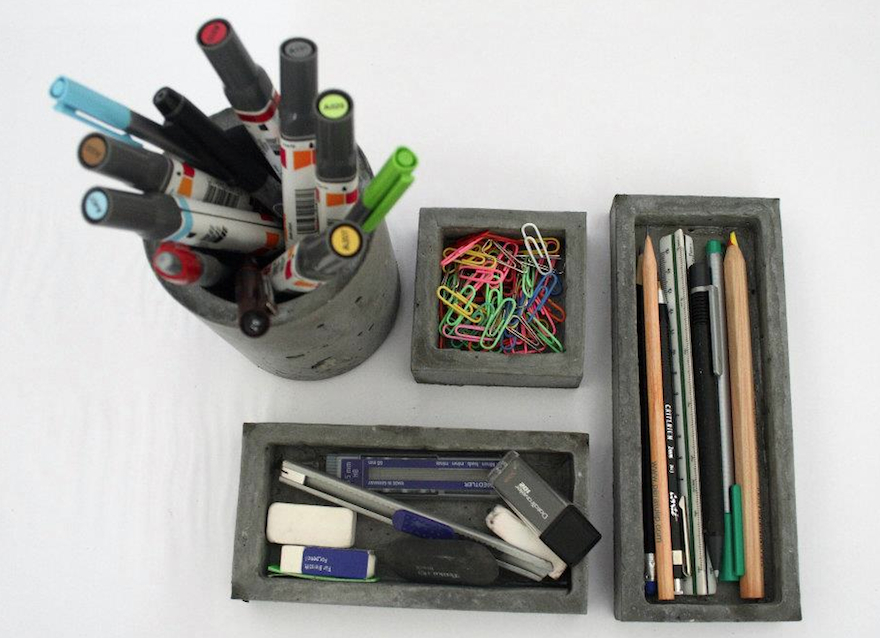 The concrete desktop organizers from CMNTDesign can be bought individually, to meet each end-user's needs. There's the cylindrical pen holder, three sizes of trays, and (not shown) two 8-cm squares that can hold small papers between them. The shallow trays provide a place for something like a few paper clips, which would be lost in a Rhombin. But the more that things are stored horizontally rather than vertically, the more space they take. 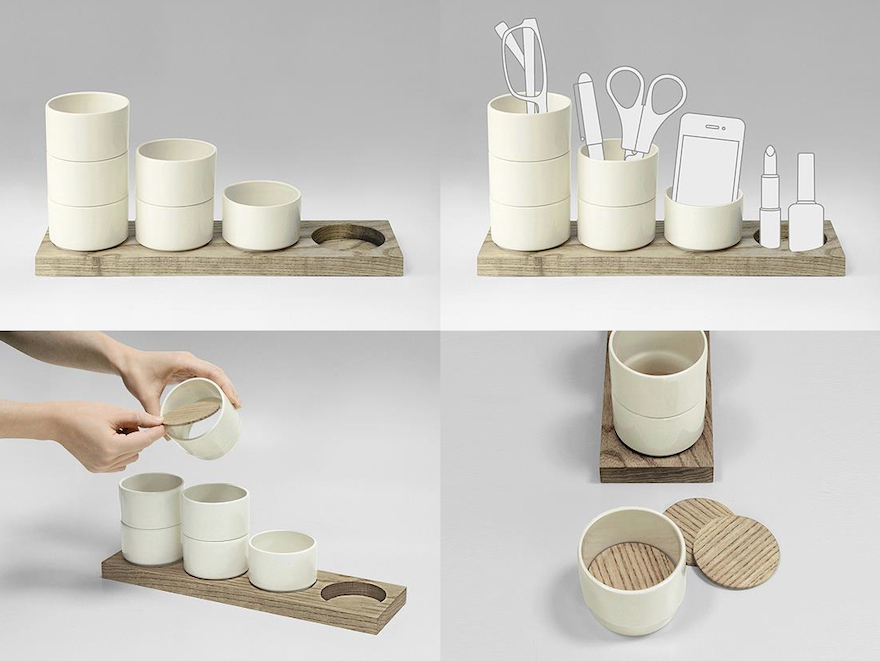 The SHUFFLE Tidy from RALLI Design is a series of stacking earthenware ceramic cylinders; the wood base can be removed from any cylinder, creating a taller container. Flexible designs like this are always appealing, but I wish you could buy extra cylinders instead of being limited to the set of six. 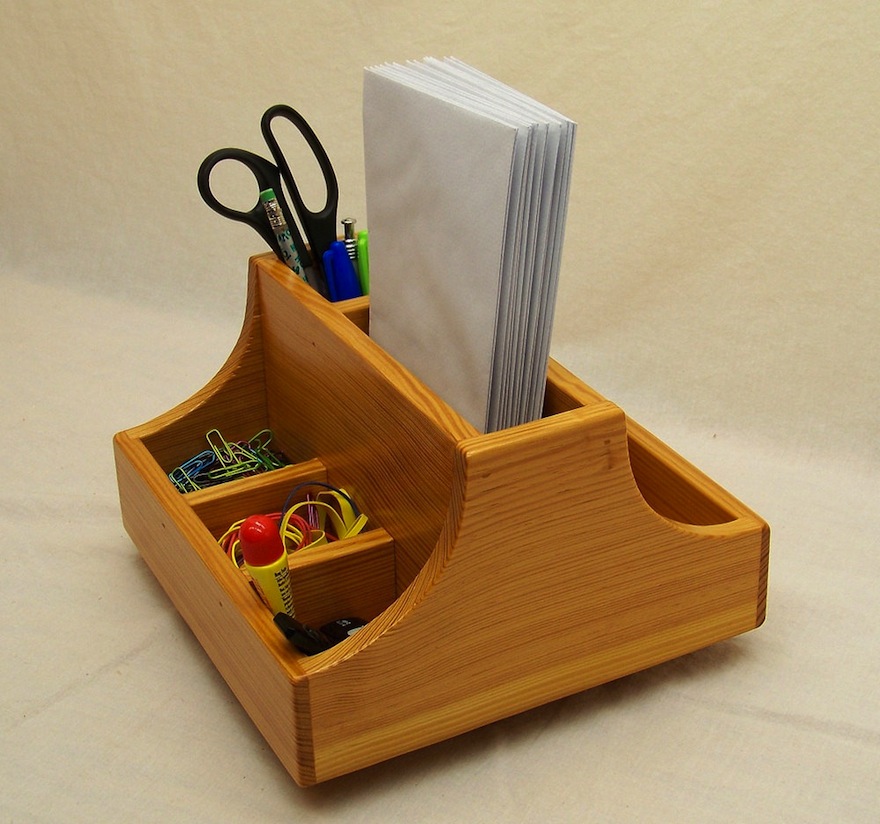 This desk caddy from Bearcat Woodworks is on a swivel base, allowing it to have a fairly large capacity, all with easy access, without being very long. (It's 9.5" square.) The various-sized compartments would hold a wide range of items. 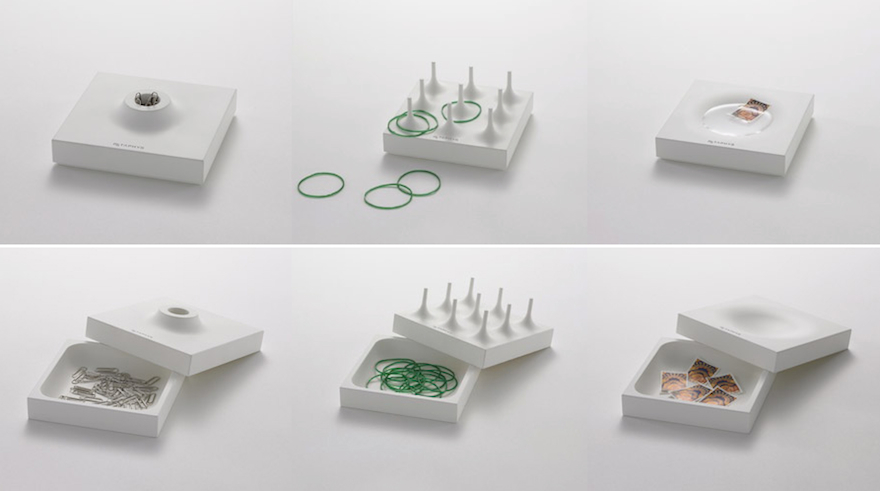 Metaphys has a collection of special-purpose desk organizers, with one each for paper clips, rubber bands and stamps. Each is designed to allow some of the items to be stored where they're accessible from the outside of the container, while more can be stored inside. It's another interesting trade-off; by being so item-specific, these containers work really well for those items—but they lack flexibility, and only work for end-users wanting to store those specific things on their desks. 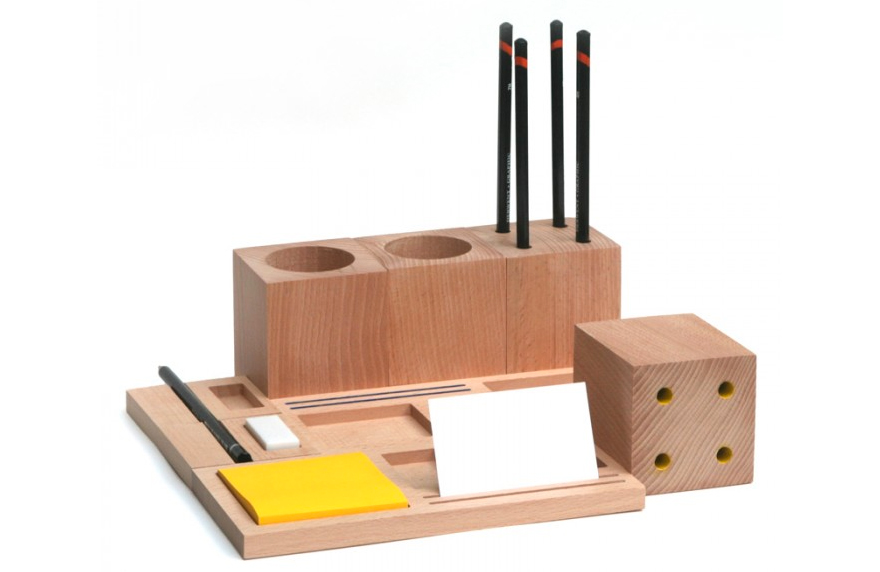 The Kukka Blocks Collection, designed by Rona Meyuchas Koblenz, is a collection of four products: a block with one large hole, a block with four small holes for pencils and such, a pencil and eraser tray, and a larger tray to hold miscellaneous items. It's designed to be sold in a sets of one or two each, which seems odd for a modular system. The tray holding a single pencil seems like an odd use of space, too, for most end-users. 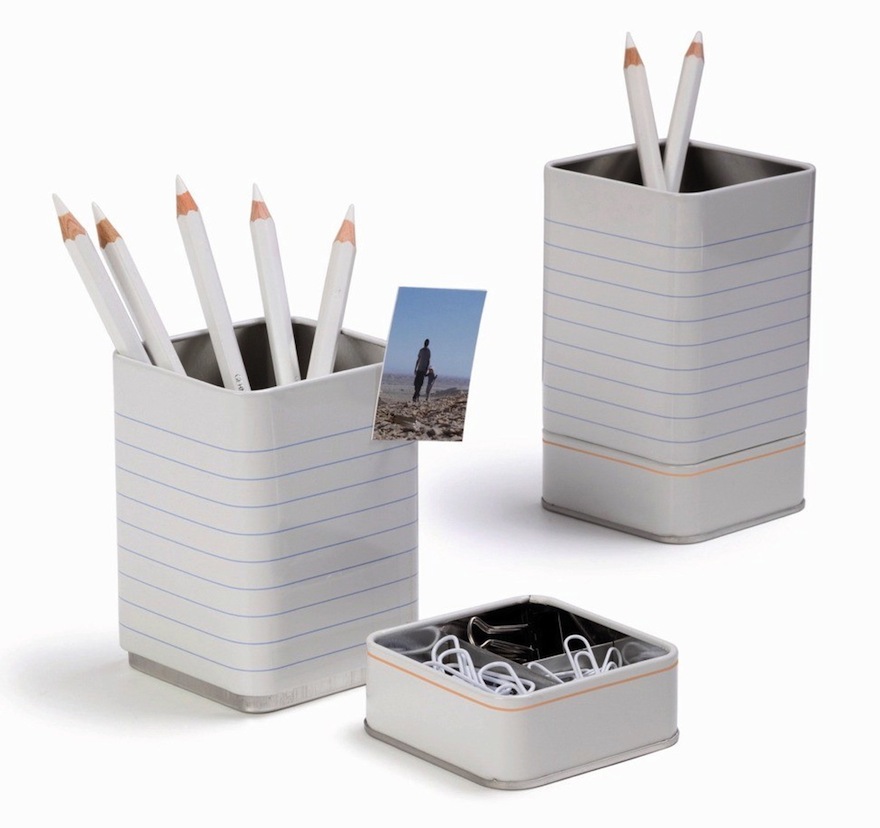 The Tidy Desktop desk organizer designed by Oded Friedland of Monkey Business, fits many types of storage in a small space. The base compartment on the pencil cup stores little things such as paper clips and small binder clips; the pencil cup also serves as a small magnet board. 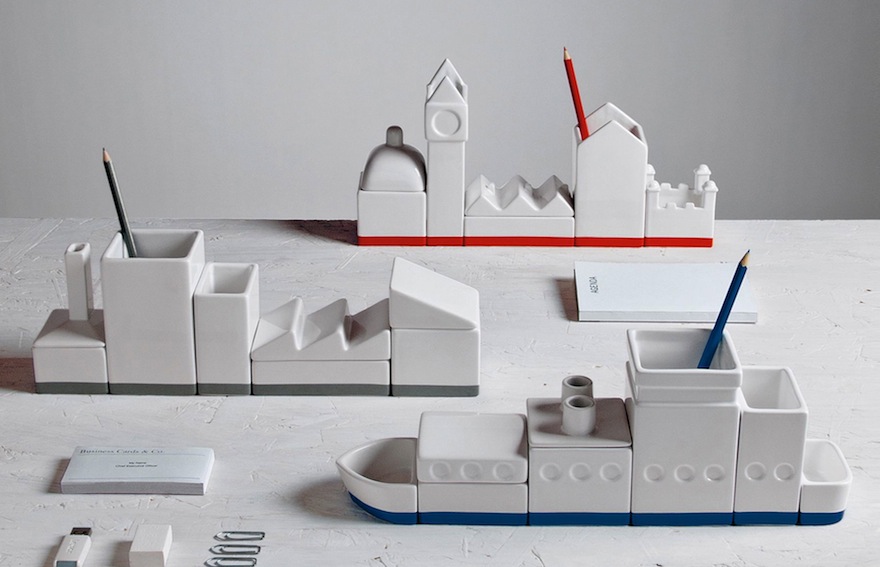 The Desktructure from Seletti, designed by Héctor Serrano, comes in three variations: a ship, a warehouse and a city. Each one has multiple porcelain pieces: a pen and pencil cup, some lidded boxes, and some open storage. Not everyone does well with lidded containers—some people just need everything out in clear sight—but other end-users will like having some items less visible.

And here's an unusual design: the Office Brush, by Raumgestalt. While it won't hold the paper clips and such, it's fine for pencils, pens, scissors, letter openers, rulers, etc.—and anything that would do OK laying on top of some of the bristles.