Throwback Thursday: More Than You Ever Wanted To Know About 'Optical Toys' of the 19th Century

A moving image from a Praxinoscope

Richard Balzer isn't shy about his avocations. In fact, he shares them all online for the world to enjoy via his Tumblr page. His biggest vice: optical toys of the late 19th century—which, when scrutinized, resemble experimental media than toys. One of the oldest gadgets, the Thaumatrope, dates back to the early 1800's and consisted of two different parts of a drawing painted on either side of a card. By spinning the image using two strings (one at each end of the card), the two pictures become one as the images flip (the most well-known of these being a bird in a cage—see below).

Look familiar? These could be considered the very first animated GIFs. Balzer goes more into detail on the science behind the toys (this is only a small excerpt from Balzer—check out his website for more insight):

There was a period ... when scientific experimentation based on the phenomenon of 'the persistence of vision' in which the brain retains the impression of an object for a fraction of a second after its disappearance, creating the possibility of apparent motion. These devices thrilled and delighted generations of people. Optical toys were the creation of scientists concerned with understanding the functioning of the eye and brain.

Balzer refers to his collection as a Wunderkabinette, a throwback term used almost 500 years ago to describe the cabinets European collectors kept their treasures in. Since the toys were first used for various scientific experiments, it's no surprise the contraptions used to create the "moving" images are as complicated looking as they are. All of the gadgets' names end in -scope or -trope—Greek for 'viewer'—and they all work differently to produce variations on the optical illusions.

Being Greek, all of the names get a bit lost in translation. You know a bit about the Thaumatrope (mentioned previously), but here's a breakdown three popular models and how they work: 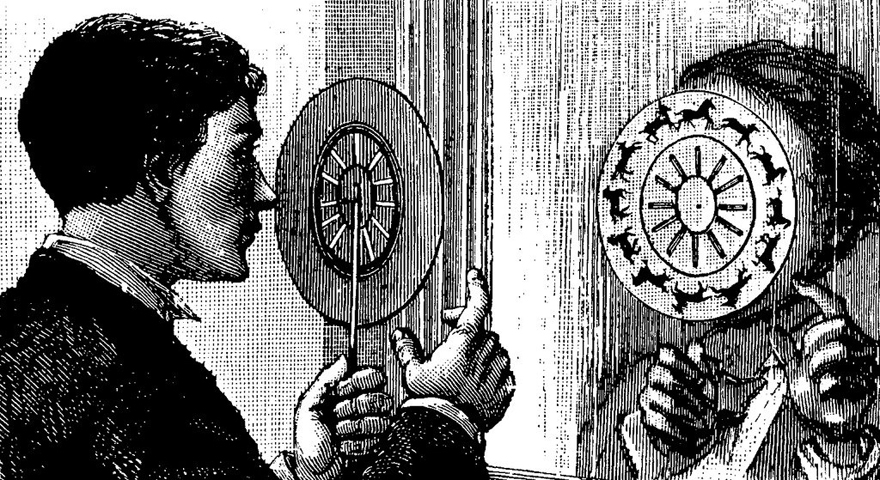 Both of these toys functioned in a similar manner. Balzer explains on his website:

First a progression of slightly differentiated drawing was made on a disc, than a similar number of slits were cut into the outside edge of the disc. When the disc was mounted on a handle and the viewer stood behind the disc, a moving picture could be created by spinning the wheel while watching the drawings in a mirror through the slots. The slots acted as a shutter and what appeared was single moving drawing.

The downfalls: Only one person could enjoy this toy at a time and you had to find a mirror to properly witness the illusion. The man behind the Phenakistiscop—Joseph Antoine Plateau—eventually lost his eyesight as a result of his experiments with light. (In short, he stared at the sun for too long.) Remember that the next time you're giggling at the latest GoT GIF. 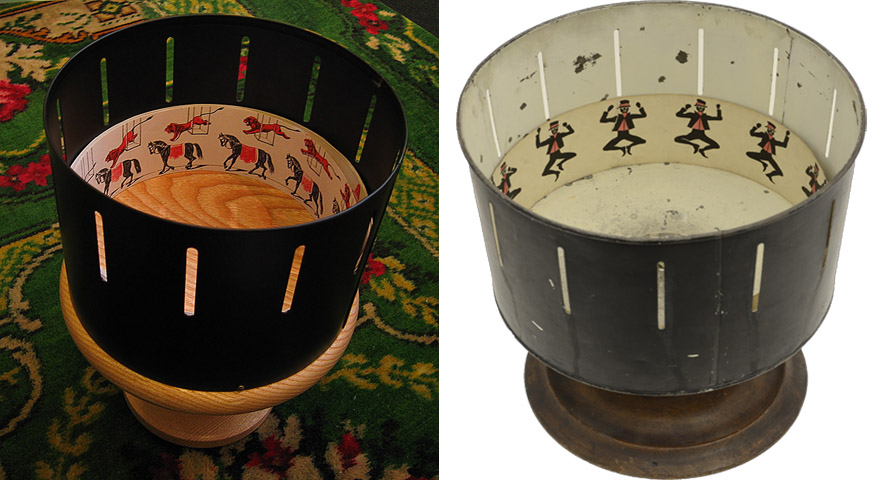 The next design came along in 1834. William George Horner's Zoetrope allowed more than one person to watch on at a time, with its revolving band of pictures. "Images were drawn on a band. and the band was placed inside a slotted cylinder with the same number of slots as drawings," Balzer says on his website. "Viewing the band through the slots in the turning cylinder again appeared to create motion." Users no longer need to camp in front of a mirror to see this model in action. 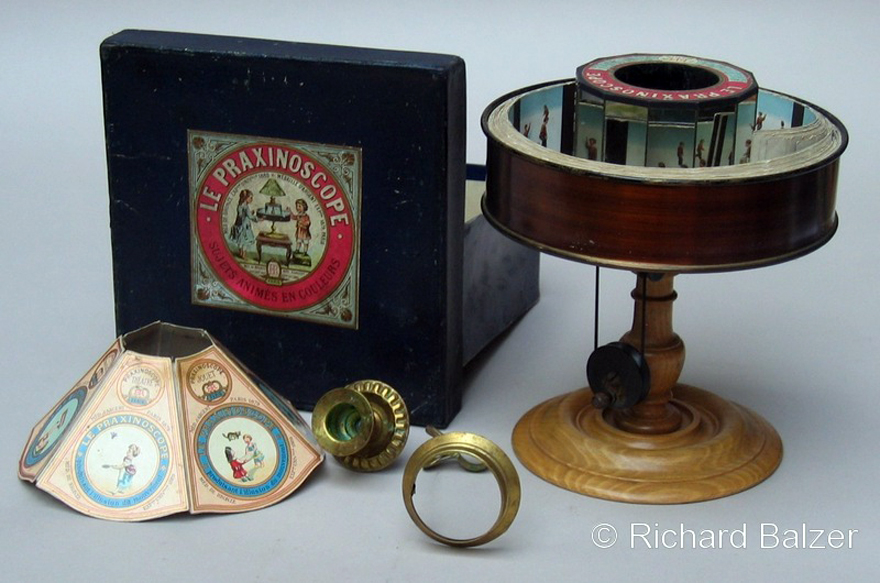 In 1877, Frenchman Emilie Reynaud came along and made even more improvements on past designs with Le Praxinoscope. Previous toys had always experienced a bit of distortion caused by the interruption of light from the various slots, so Reynaud took them out all together. By adding a set of mirrors facing the image strip on a small cylinder inside the device, the user could see the images move via the series of mirrors when the toy was twirled. Reynaud elaborated on this design in 1879 when he introduced the Praxinoscope Theatre—which allowed a new angle of vision (proscenium-framed viewing).

You can check out more of Balzer's finds on Tumblr.

Throwback Thursday: More Than You Ever Wanted To Know About 'Optical Toys' of the 19th Century