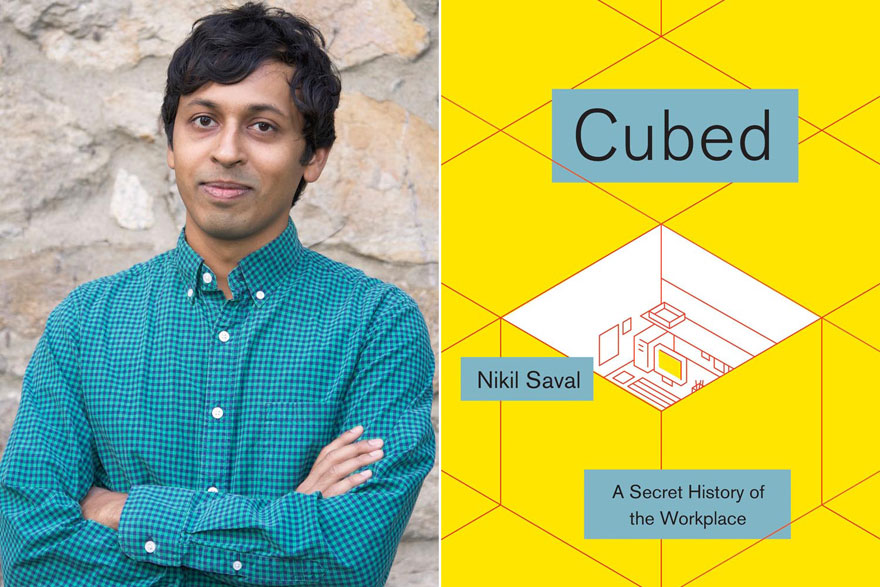 Any book that opens with photos of "Michael Bolton" leering over the corpse of an office printer, bat in hand, in a still from the 2005 movie Office Space is a winner in our eyes. While the "PC load letter" error that led to that act of printercide could be a study in failed user experience in itself, Nikil Saval focuses not on devices, but on their surroundings. While the incomprehensible UX of that printer may have been the proverbial straw, both the film and the book focus on the soul-crushing nature of the office itself, by way of its smallest unit of organization, the fabric-walled cube divider.

Of the major design manufacturers, both Steelcase and Knoll have a history that stems from office design, and while standalone chairs like the Aeron get their due, Cubed tracks the history of the office from turn of the century counting houses to the modern telecommuting non-office. Before opening the book, we'd expected more focus on the history of the cubical design, but Saval recognizes that the cube is emblematic of the larger organizational and political structure of the modern work environment, and it's quite a tour. Like any good (book) designer, Saval spends as much time contextualizing the problem as he does addressing it. We don't even meet the ostensible subject of the book, Robert Propst's Action Office, which birthed the "cube," until the halfway point of the book. While much has been written about the failure of Le Corbusier's Garden Cities of To-morrow as an organizational force for a community, the story of the similarly optimistic and equally ineffectual Action Office is more appropriate for industrial design readership, and equally informative.We start way back with Melville's Bartleby the Scrivener, where the white collar world once appeared a respite from the distinctly unnatural factory environment that was soon to be pilloried by Upton Sinclair in The Jungle. While the move from doing repetitive mindless manual labor in a soot-coated factory to doing mindless repetitive paperwork was sure to keep one's collar white, the culture it propagated was by no means superior. Keep in mind that these offices predated the computer, so much of the work done (transcribing, filing, copying) is now automated. Unfortunately, while the trend of automation at one point looked to free the proletariat, that future never materialized. Instead, we were gifted with Taylorism, the card punching, stop clocked "science" behind minimizing autonomous movement in the name of efficiency. Each person in the steno pool was given discrete parceled tasks, promised as the knowledge economy, but manifested as envelope stuffing.

Not surprisingly, an autodidact like Robert Propst, upon being brought into this mechanistic grist mill of humanity, recognized a lot of problems. Long before he created the "Action Office," he micromanaged his own life and environment through the strategic placement of pinboards and different work areas, even ones where the user could stand. Little did he know that those pinboards would ultimately become the divisive fabric covered walls of the "cube." Instead, he imagined a more open plan hexagonal arrangement, more like the office gardens of Europe. The saddest moment in the book is the inclusion of photos from marketing literature, showing Probst's open plan Action Office gathered into very tight orthogonal chambers rather than an unstructured honeycomb.

If there's a lesson for industrial designers, perhaps it's that human behavior can't be designed by fiat. The manufacture of a flat fabric surface doesn't demand to be a pinboard just because the designer says so. Likewise, the Garden Cities of To-morrow foreseen by Le Corbusier didn't find their open gardens used as such, instead finding them filled with the sleeping homeless not lucky enough to live there. While Saval doesn't reach that conclusion directly, his detailed history of the cultural forces surrounding Probst's platonic office telegraphs not only the propensity of homo sapiens as a toolmaker, but also as an appropriator who could see a stick as a firepit spit and the sort of social creature who would gather around the fire and food as a social animal. While recognizing why the designed office fails, Saval speaks fondly of the European ideal of the Garden office, where haphazard communities of workers could gather in the "streets" or put their noses down to work in a secluded "cave." Much like Jane Jacobs before him, he understands that the important labor of humanity isn't the manufacture of an idealized workspace, but instead the informal gathering of a community that interacts dynamically, and that's high praise indeed.