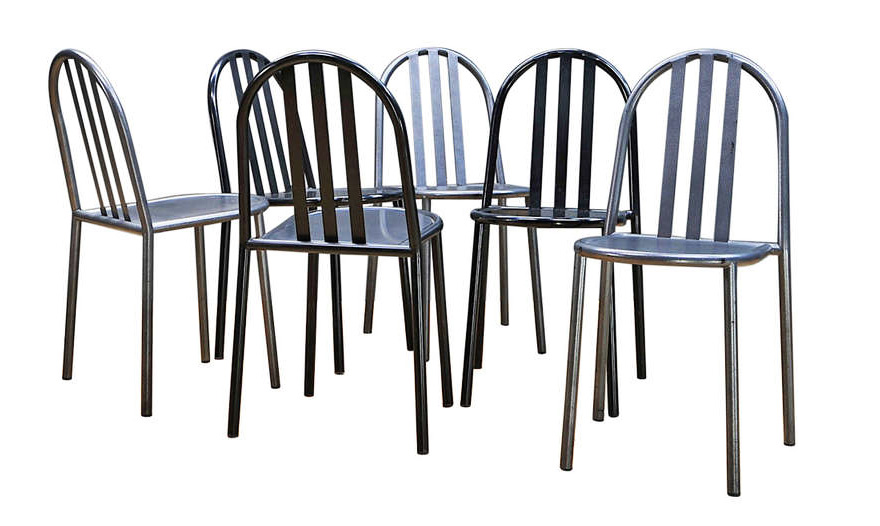 In this series, Matthew Sullivan (AQQ Design) highlights some designers that you should know, but might not. Previously, he looked at the work of Gae Aulenti.

Robert Mallet-Stevens was a pioneering modernist who designed architecture, interiors, film sets and furniture. He is considered one of the most influential French architects of the first half of the last century—for many, slightly below Le Corbusier. His relative obscurity is due in part to the poor timing of his death. As a 2005 Domus article pointed out, Mallet-Stevens died "just before major postwar construction began to take place, not in time to leave behind a theoretical work to assure his place in the archives." In addition, his focus was less universal than Le Corbusier's. Mallet-Stevens was personally involved in all manner of architectural detail. Because of this multifaceted involvement, he created design and architecture of nuanced chicness. His work did not jettison the richness of the Vienna Succession and the Wiener Werkstätte—but Mallet-Stevens had one foot aimed directly at the super-reductionist future of full-blown modernism. 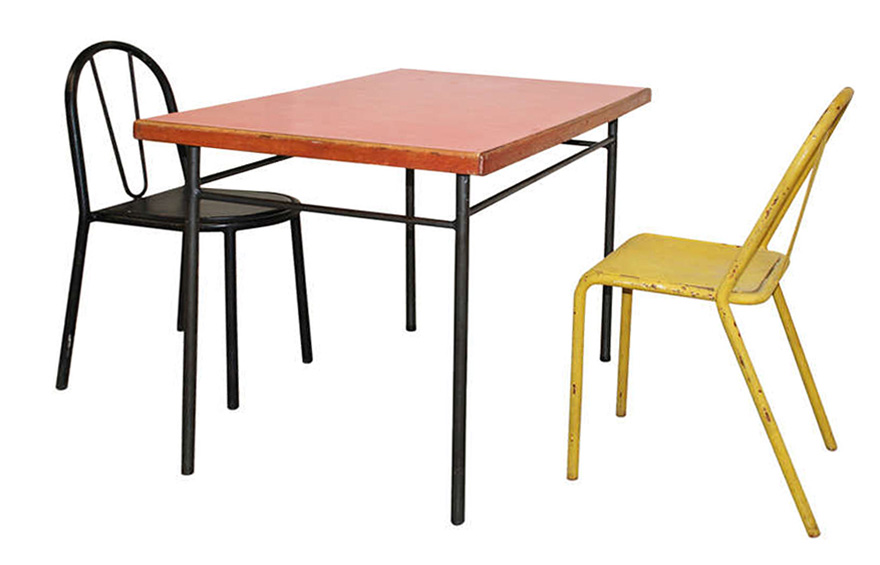 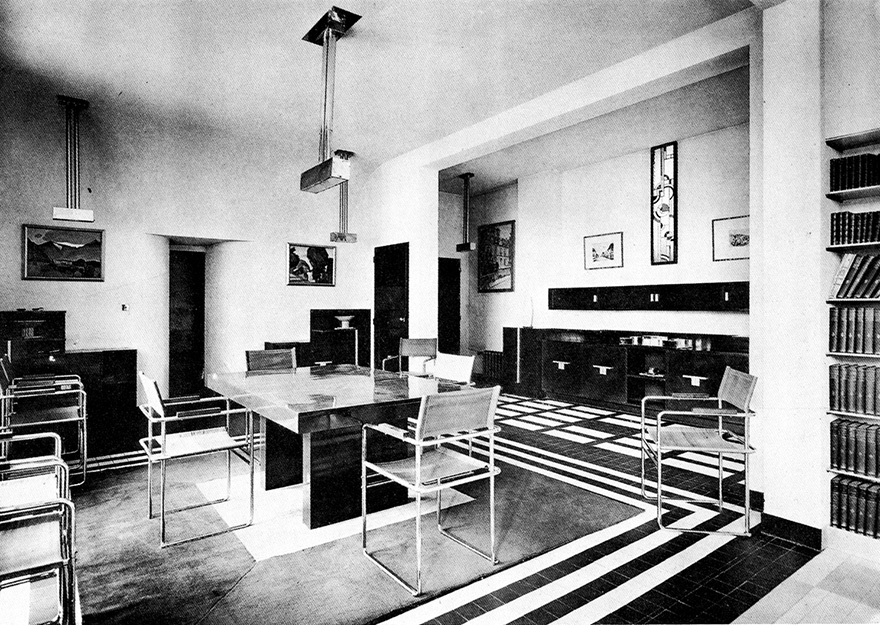 Like many great designers, Mallet-Stevens was a shrewd but tolerant synthesizer, bringing together those artists and artisans he felt were superlative. For the home of the Vicomte de Noailles, he yoked the likes of Eileen Gray, Pierre Chareau and Theo van Doesberg (in retrospect, a pretty stunning roster). Before the First World War, he created a magazine whose board included such diverse talents as the composer Claude Debussy and the painter Maurice Denis; and in 1929 he founded the Union des Artistes Modernes, which included such standard-bearers as Sonia Delauney, René Herbst, Charlotte Perriand, Jean Prouvé, Pierre Guariche and Mathieu Matégot. Without question, Mallet-Stevens's best-known piece of furniture was the enameled tubular-steel chair that he created for the Art Menagers exhibition in 1936 (top image). Of furniture, Mallet-Stevens said it should be "Functional in terms of contemporary living, simple and suitable for mass production" (from Domus, April 2005). The chair is a masterpiece of simplicity—durable, stackable and comfortable with genuinely elegant lines (but not remotely overdone). It has none of the decorative conceits of other chairs created at that time, and its longevity in the rotation of interiors since attests to this. All examples were vintage until 1978, when the chair was revived by the French interior designer Andrée Putman, as part of her furniture company Ecart. About the chair, Putman said, "Encountering this object was one of the decisive moments of my life. Its proportions, its elegance, its appearance, make it timeless." 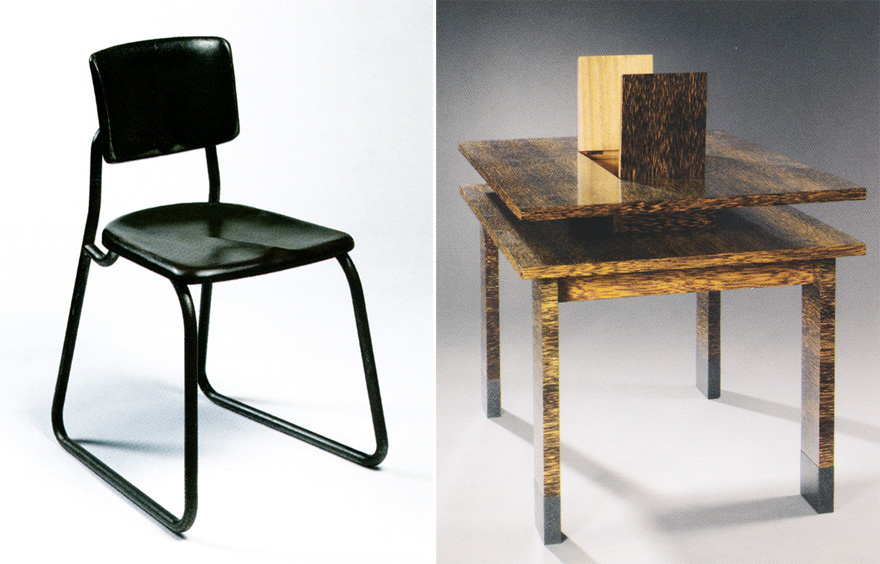 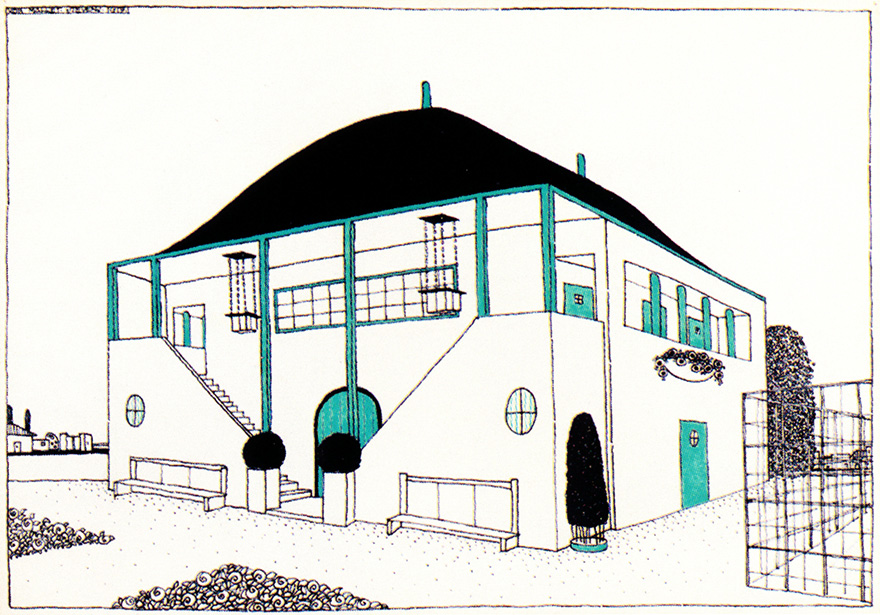 Mallet-Stevens shares a particular zone with the Viennese architect Adolf Loos and his French compatriot Pierre Charaeu—that of the dandy modernist. Not quite a fop but an extreme aesthete; a point somewhere between Oscar Wilde and Mies van der Rohe. The pieces and architecture of Mallet-Stevens and Co. should not be considered Art Deco, being too informed and excited by inventions in engineering—not by mere decorative novelties. The work is very particular, a very delicate, optimistic and interesting arrival. Although it informed much of what was to come, the worldwide crisis of the early 1930s and the congealing of the Second World War wiped clean Mallet-Stevens's particular territory, and for all his and his peers' talk of "the new man," they really had no idea of how new and different that new man was to be.

—Adolf Loos's bizarre Ornament and Crime, of particular influence on Mallet-Stevens. The essay can be read here. 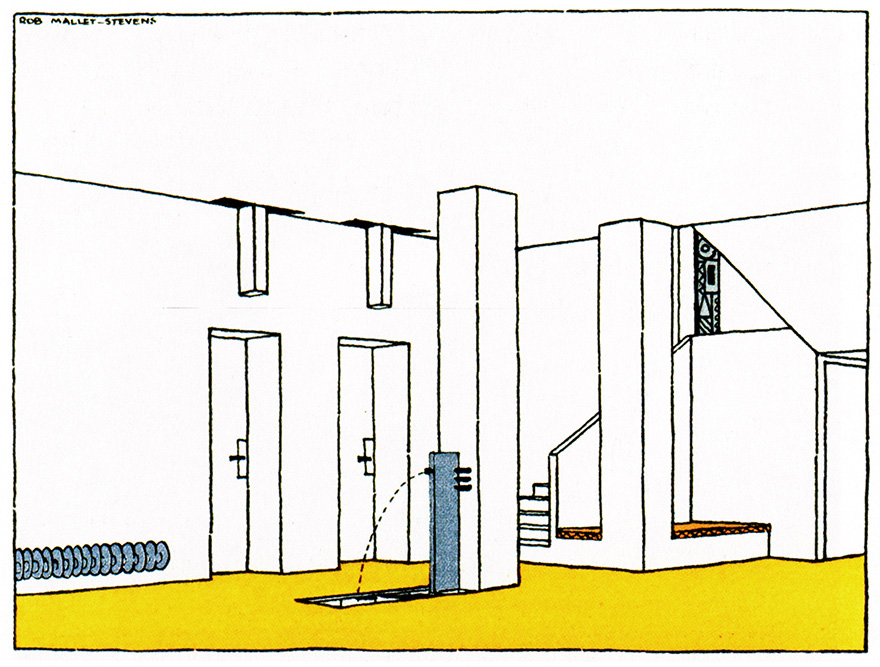 A 1925 drawing of an interior with a fountain 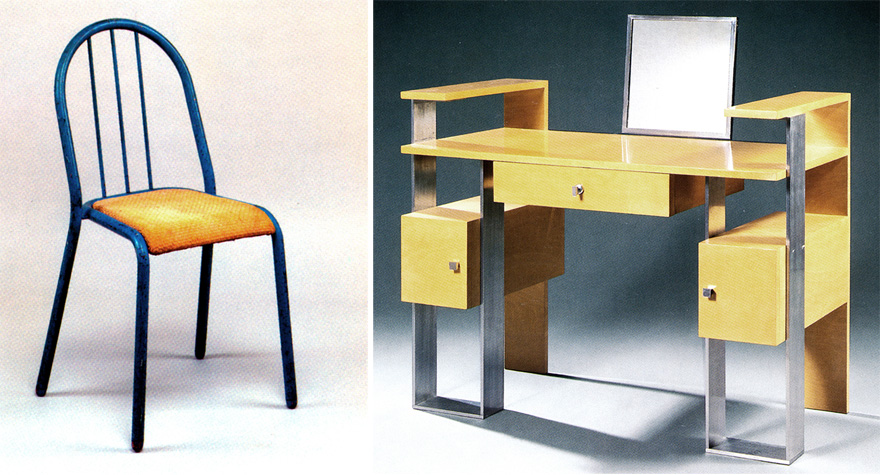 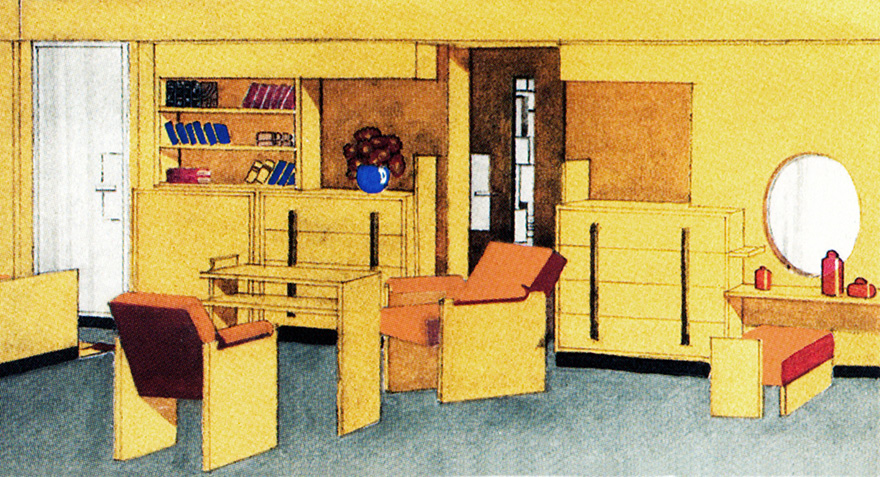 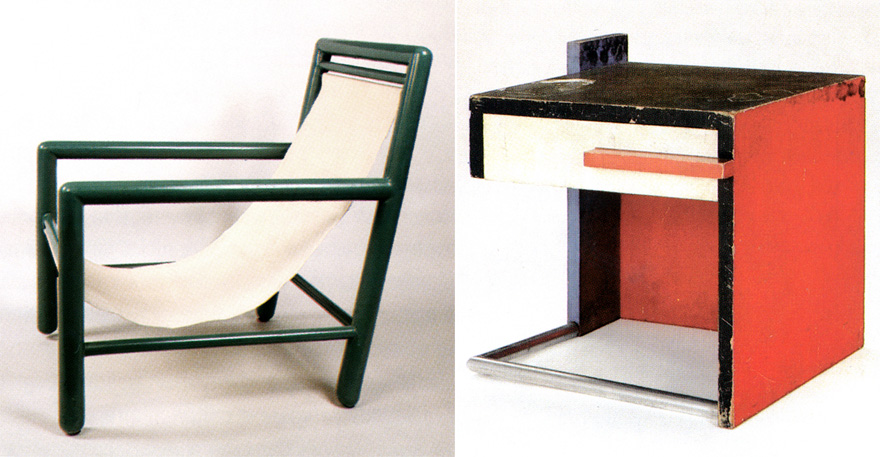 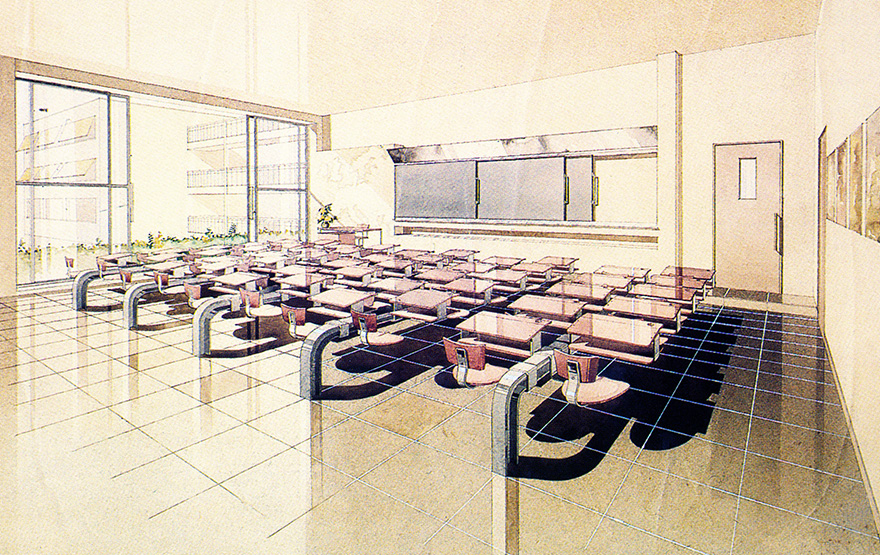 A 1936 rendering of school furniture 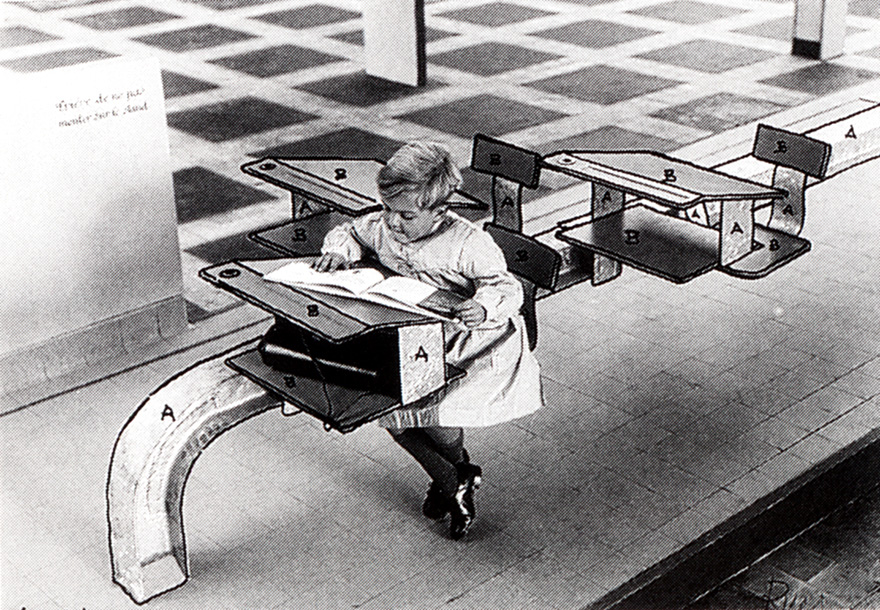 A photomontage of Mallet-Stevens's classroom furniture 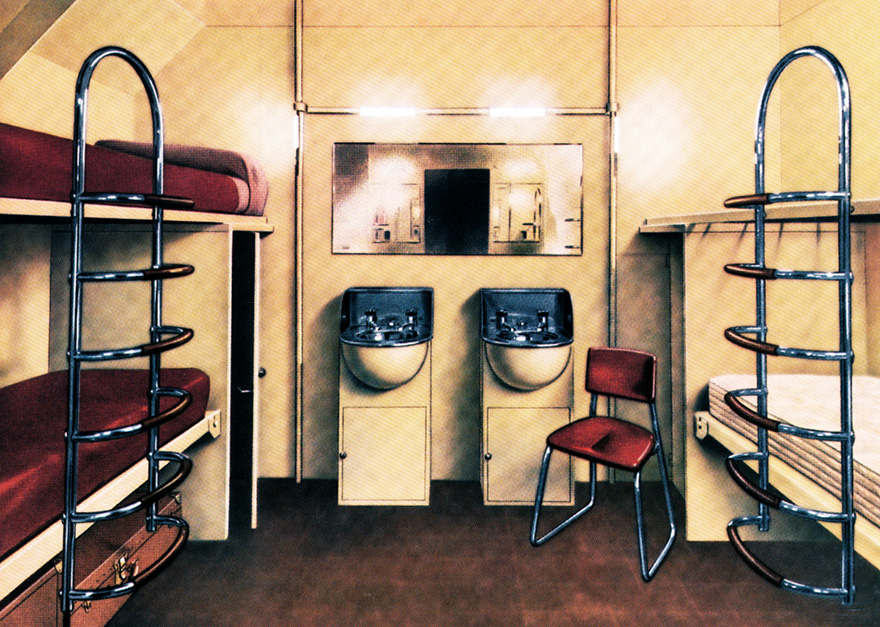 A 1935 rendering for a cruise ship interior 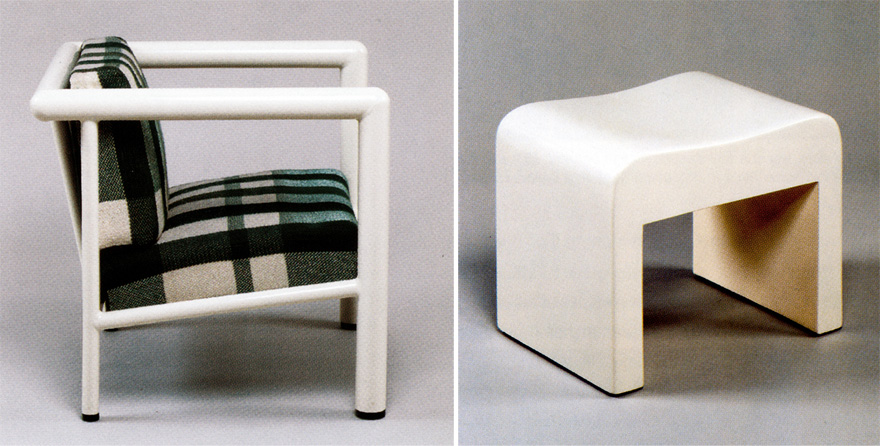 Left: a lounge chair from 1927. Right: a Mallet-Stevens stool 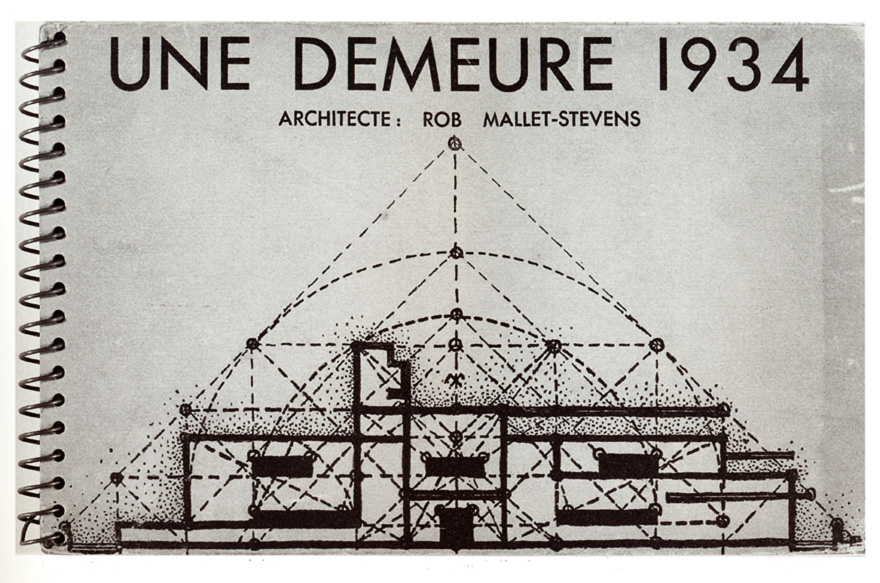 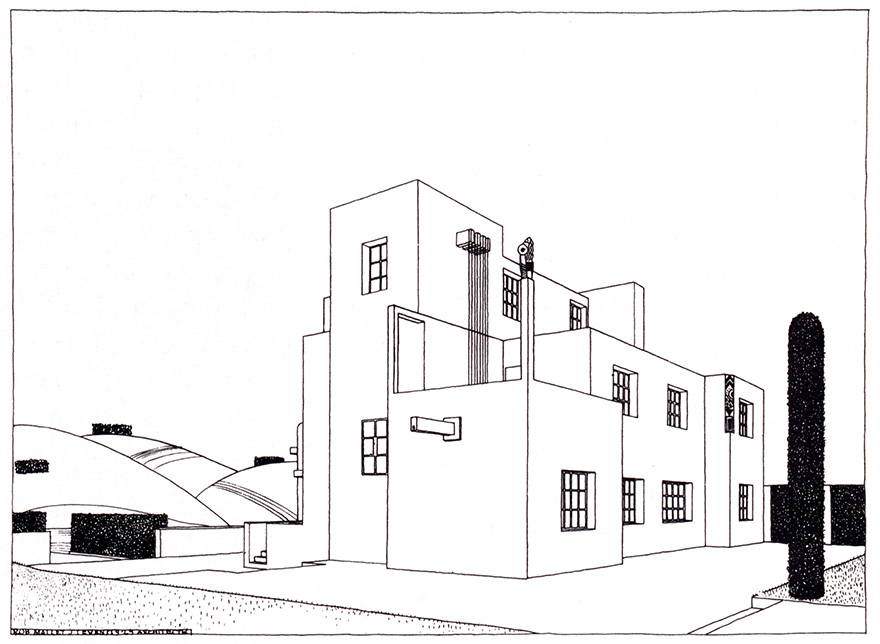 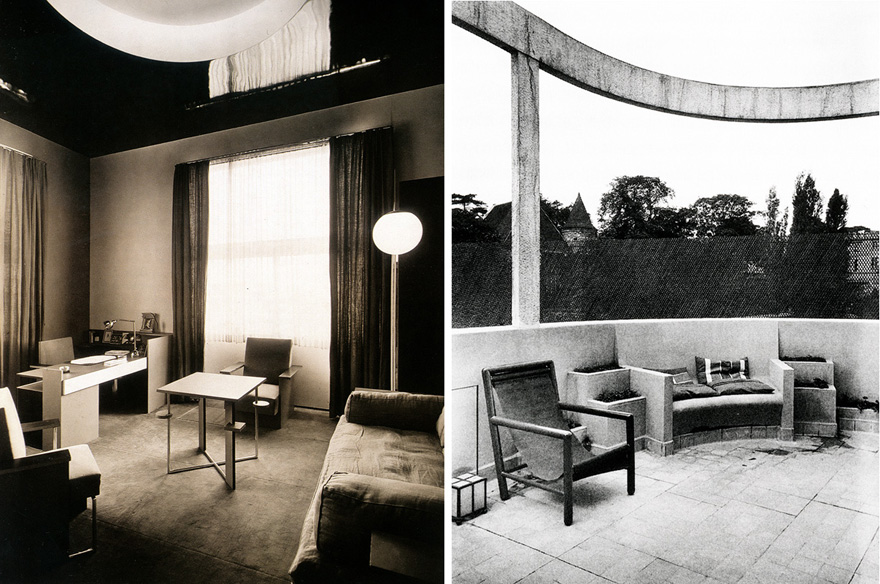