A Wake-Up Call for All of the Senses: Nescafe's New Alarm Cap by NOTlabs 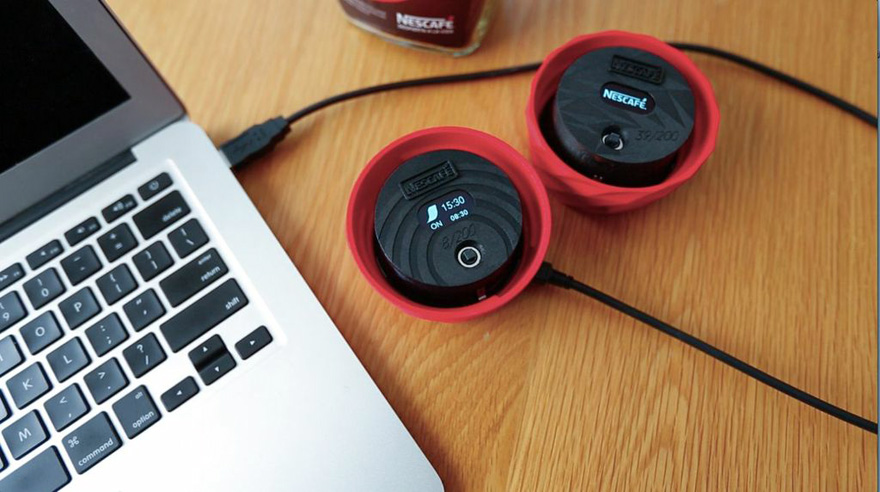 We've all seen commercials featuring picture-perfect slumberers slowly waking up to a casually wafting scent of a freshly brewed cup of coffee. It's something we'd all love to experience, but let's be real—it would have to be a mighty strong mug to pull most of us out of dreamland at the day's first light. Now, instant coffee giant Nescafé has found a way to integrate that visceral coffee aroma into a morning wake-up call with a twist.

Nescafé's new 3D-printed Alarm Cap design— as created by NOTCOT's physical counterpart NOTlabs—awakens caffeine enthusiasts with the sweet sounds of nature (or their take on it, at least), an alarm that can only be turned off once the cap is twisted and removed from the canister. NOTlabs worked with Nescafé's branding agency Publicis Mexico to come up with a brand new function and branding for Nescafé. The coffee brand came to Jean Aw—founder of NOTCOT and co-founder of NOTlabs with Shawn Sims—with the idea and they ran with it. "Having been covering design for the last nine years, I'd been itching for new projects to explore and we've been sharing our experiments on NOTCOT with readers as we've played with our huge laser cutter, 3D printers, wood/electronics shop, garage and more," Aw says. "So, when Publicis Mexico reached out to us with the concept of a 3D Printed Alarm Cap that would turn off when the bottle is opened, we were thrilled to collaborate with them to design and bring it all to life." 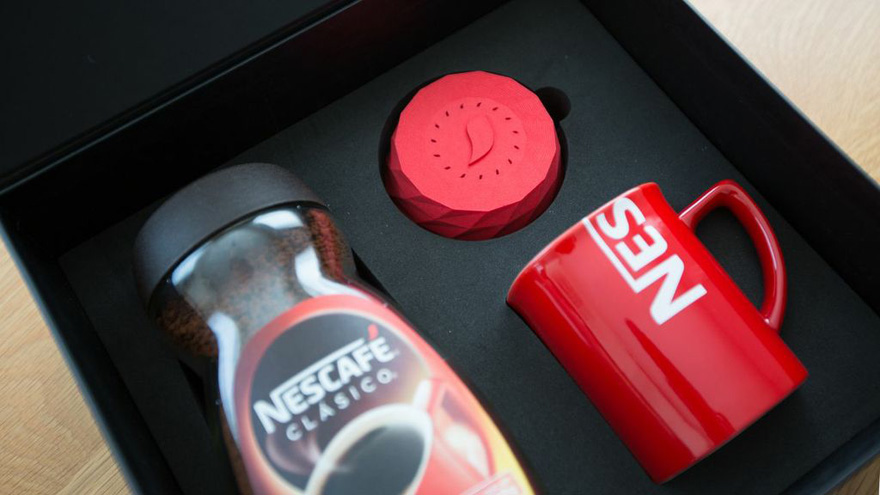 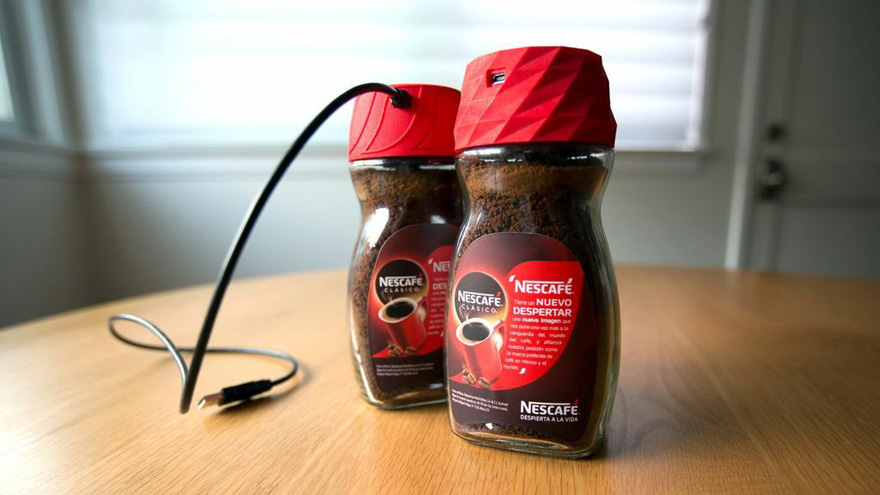 Popular though 3D printers are with enthusiastic DIYers and makers, the technology has yet to be adopted by major brands and businesses yet. Without any real precedent to keep in mind, Aw and her team built a proof of concept and got to work. "We were faced with a short time frame, so finalizing the design/electronics and production were nearly simultaneous," she says. "The three main aspects of the design/production are Electronics, 3D Modeling/Printing and Assembly."

So too did the availability of new tools facilitate the design process. Los Angeles-based Aw and Sims worked with Leo Corrales of Publicis Mexico to 3D-model the caps, while Eric Brockmeyer—a digital fabrication designer based in Pittsburgh—joined the team to help spec design parts and code the alarm. The cap prototypes were printed in-house, enabling a nimble, iterative approach to tweaking them until they arrived at the final product.

Once the design was finalized and the orders were in, NOTlabs became the 3D-printing nucleus of the entire project. "The production phase last month meant a constant whir of Makerbots, soldering fans, the laser cutter etching extra-special caps and glowing LED rings and hearing the seven Nescafé Alarm Cap tunes endlessly," Aw says. "So silly, but there was a point where I'd be in the yard and think there was a Nescafé Alarm going off—turns out it was just our actual birds in the tree above that sounded like the nature sounds in the alarms!" 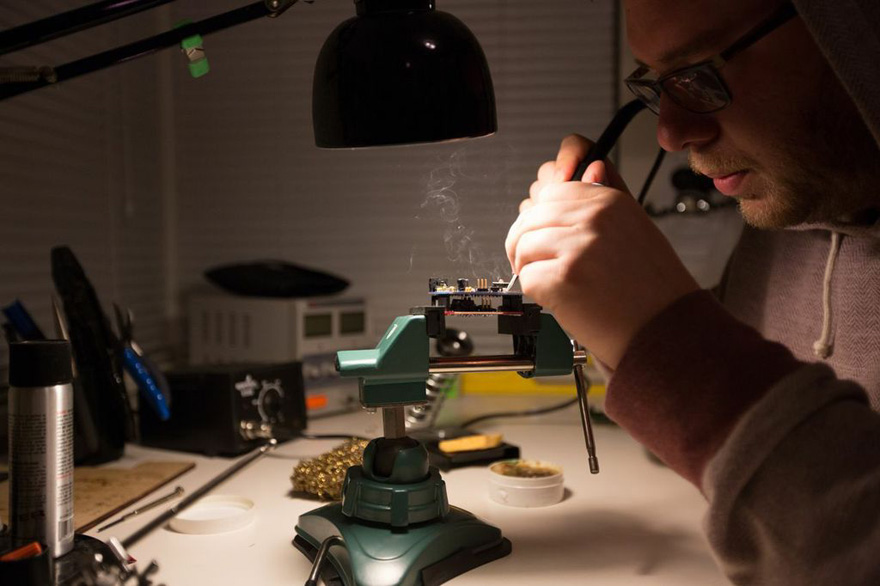 More on the concept behind the cap—the exteriors of which were printed by Shapeways: "It was important that this wasn't 'just' a 3D-printed cap, but a design object we'd love to have around our home and studio—something you could enjoy the look and feel of on your desk," Aw says. "Of course, thanks to the fact we were 3D-printing the caps, we were able to have two designs—there is the faceted cap as well as the accent cap, both of which celebrate the new brand image of Nescafé. One of our favorite details: when you place the cap on your desk, it looks like it's floating." 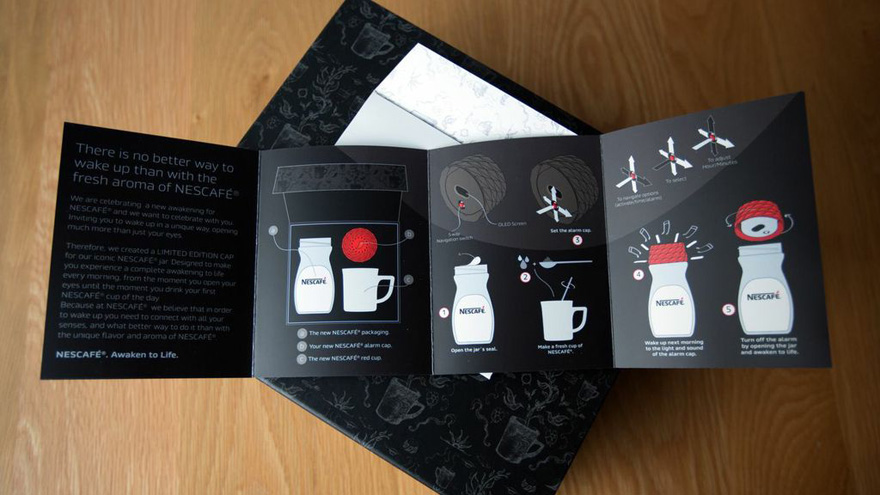 Nescafe might be one of the pioneers when it comes to mass-producing 3D-printed designs on a bigger, more corporate scale, but as Aw says, it's hard to deny the gap is closing. This could be great news for designers of all levels and walks of life. "Just don't 3D print something just to say it's 3D-printed," Aw says. "Make the most of what 3D printing offers—from small run designs, have every print be unique, print on the fly, explore different materials (plastic, sugar, metal, ceramic), let your buyers personalize each print, etc.—get creative with the possibilities!"

The finished product looks (and sounds) fantastic, but as we've all come to know, a beautiful design doesn't come fruition without a few lessons. Here are some insights from Aw that she picked up along the way:

A Wake-Up Call for All of the Senses: Nescafe's New Alarm Cap by NOTlabs