Colony on Canal: A Showroom for Designers, by Designers 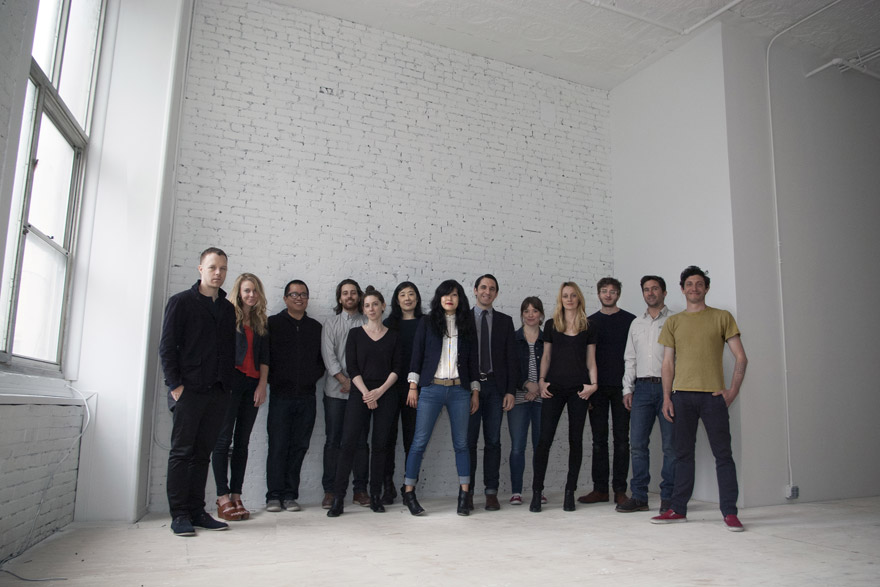 Jean Lin is taking a real estate gamble in Chinatown, and she's gathered a group of emerging designers to ante up with her. At 324 Canal Street, Lin has leased and rapidly renovated a 2,000-square-foot showroom that will soon be the headquarters of a new venture called Colony. Described by Lin as "a designer's cooperative," Colony will be something unique in New York's design landscape—not quite a gallery or store, and not exactly a co-op either, but an experiment in pooling resources to boost the profile of independent design.

The idea started to take shape last year, as Lin's conversations with designer friends revealed some common business struggles—especially the need for showroom space in Manhattan. Designers kept telling Lin that they lacked a central location to send potential clients to see their work in person, something that is especially crucial for doing business with the interior designers, architects and retailers who might order work in large quantities.

"Having a presence in Manhattan is huge," says Stephanie Beamer of Egg Collective, a Brooklyn-based furniture-design studio founded in 2011. "That's really where clients with purchasing power are. But for young designers, it's virtually impossible."

Egg Collective is one of 12 design businesses that have signed on for Colony's launch. The others are Allied Maker, Assembly, Meg Callahan, Flat Vernacular, KWH Furniture, Zoe Mowat, Sharktooth, Sit and Read, Hiroko Takeda, Token and UM Project. Nine of the 12 are based in New York City, with the others within a few hours by car or plane: Long Island (Allied Maker), Providence, Rhode Island (Meg Callahan), and Montreal (Zoe Mowat). Their businesses have been around for as little as two years and as long as a decade. Many of them focus on furniture, but there are also designers of lighting, textiles, wallpaper and household objects.

Starting in June, they will be using the second floor of 324 Canal Street as a joint showroom, occasional exhibition venue and community hub. But first, for Design Week, the space will play host to a pair of exhibitions—a salon-style teaser for Colony and the third edition of Reclaim NYC, an annual design exhibition and charity sale co-founded by Lin. 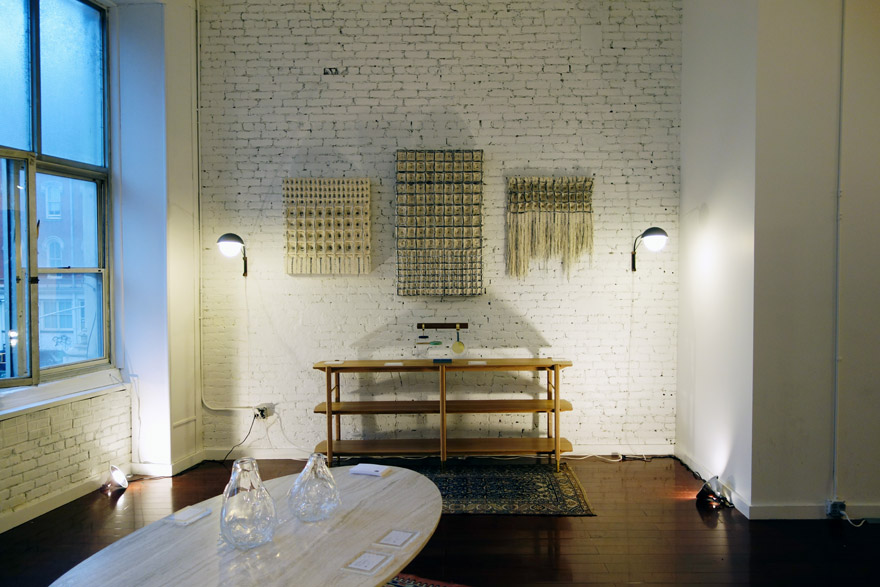 Then the Colony experiment will begin in earnest. Most of the designers have previously worked with retail outlets or trade showrooms, but those models couldn't offer them the same benefits as Colony's co-op arrangement. As textile designer Meg Callahan says, it's not just about having space to show her wares but "having a hand in how they're shown, how they're marketed." Token's Will Kavesh agrees. "I feel like we've had frustration with retail sales for a while," he says, "and to be able to have a hold on that space is an attractive proposition." Egg Collective's Hillary Petrie points out that it makes sense financially, too: "It's allowing us to get our highest-quality product to the end consumer without a ton of markup involved."

Indeed, there is no markup, at least not in the traditional sense. Each designer or firm has signed a commitment to pay monthly dues to cover rent, utilities and event expenses. (Lin plans to host quarterly design exhibitions in the space, and designers have the option to host their own occasional events.) Not everyone pays the same dues, however. "There are different tiers based on how much work you want to show," Lin says. Neither she nor the designers I interviewed were comfortable giving out exact figures, but the designers all agreed that the prices are reasonable. Meg Callahan's dues are about the same as what she pays for her 600-square-foot studio just outside of Providence. For Token, based in Red Hook, Brooklyn, the fees amount to less than a third of what the studio pays for its 7,000-square-foot space.

Other aspects of Colony's operation only loosely resemble a traditional co-op. A to-be-formed advisory board—four member representatives plus Lin—will give input and vote on high-level, public-facing decisions, but Lin remains director, curator and chief decision-maker. "While designers are coming together to meet common goals and needs, decisions are not made collectively nor is Colony self-managed by its members," say Assembly's Nora Mattingly and Pete Oyler.

For many, this is one of Colony's biggest perks. "We are running our own business; we're not interested in running another business, and I'm not interested in being on a board," says Beamer of Egg Collective. "[Lin's] vision and her ability to curate and take on those responsibilities is important to taking things off our plate rather than adding to them." Beamer's colleague Crystal Ellis agrees, adding, "I think just the simplicity of the format at the moment is one of its biggest benefits."

"It's hands-off and not hands-off—sort of perfect," Callahan says. "When Jean talked to me about it originally, I thought, What's the catch?"

If there is a catch, it's that Colony's business model is untested and still fairly amorphous. "We haven't really seen a full-fledged business plan about how it's going to function, so it's a work in progress," Token's Emrys Berkower says. "From how we understand it, it's a kind of conduit through her resources to sell our work, but most likely we will be managing those sales in the same way that we manage our sales now." The designers understand that Colony must sustain itself too, and that fees may increase to cover other operating costs. Eventually, Lin may also take a small percentage of sales. 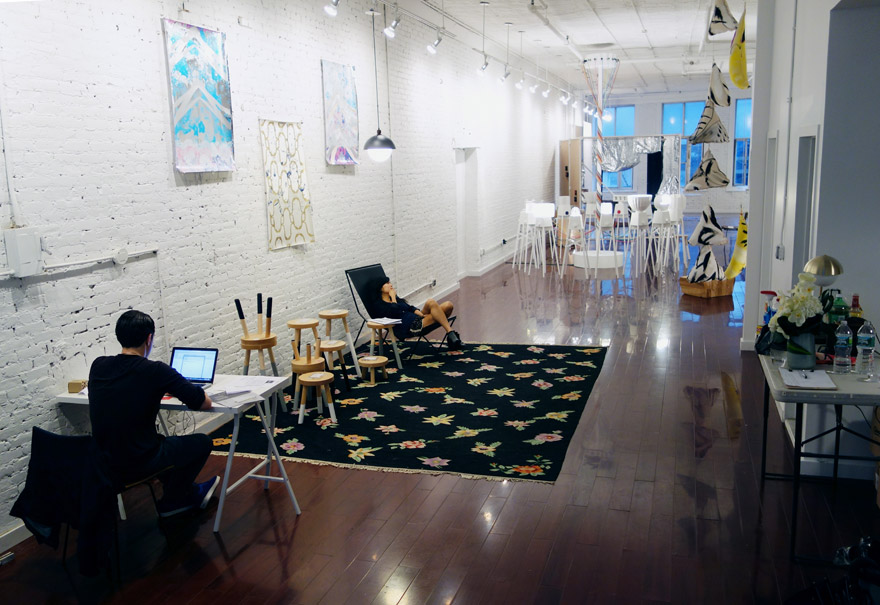 For the moment, though, Lin is taking as big a chance as the designers. Right now, there isn't money to pay for employees, including Lin. "It hasn't been fully sorted out yet, but yes, there will be somebody there to staff [the showroom]," she assures me, conceding, unsurprisingly, that "This is by far the riskiest thing I've done." That's saying something for Lin, who has been a risk-taking entrepreneur since age 22, when she started her own fashion design business. When that ultimately didn't work out, Lin set up Otto, a design blog that she later sold to Designer Pages, where she is now editor in chief. Lin also co-runs yet another design blog and shop in addition to her work for Reclaim and now Colony. "I want to make something great some day," she says of her many startup efforts. "I think that Colony could be it."

If things go well, Lin anticipates various ways for Colony to expand, including adding more benefits like group health insurance and centralized shipping. If it does grow in this direction, Colony won't be the only business trying to provide a level of practical assistance to the designer-maker community. Another venture enjoying success in this arena is Madesmith, which is a similar hybrid business—part editorial outlet, part online shop and part loose community. (Unlike Colony, its members do not pay a fee to participate but do give up a percentage of sales made on the site.) Madesmith's founder, Sumeera Rasul, also tried offering one-on-one consulting services on common business challenges, and is now working on an online university for makers, slated to launch in August.

Lin doesn't see Colony going in that direction, but she's open to what it might become in the future. "We're trying to build a foundation right now," she says, floating ideas about how Colony could become an incubator for young designers, a more robust resource center, or both. But for now it's biggest asset is probably the same thing that made it such a gamble to begin with—the showroom space on Canal Street, which gives the participating designers a platform that simply can't be matched by online venues. Lin sees this as important not only for her small band of designers but for American design as a whole: "I felt strongly that Colony had to represent the shift in American design toward great quality—something that can be held up in any international stage and really shine."

Colony on Canal: A Showroom for Designers, by Designers