"Infrastructure is a text we can read about ourselves." Nikola Twilley of Edible Geography and Studio-X NYC said during the final remarks of MacroCity, the new Bay Area conference dedicated to exploring the infrastructure critical to supporting much of our urban way of life. Noting the complex and rarely examined "cold chain," a climate-controlled supply ecosystem for food, Twilley sadly reflects, "we've built an entire artificial winter just as we're melting the arctic."

Although not overtly political or environmental in nature, MacroCity was very much about exposing the hidden flaws and needs of our cities. Organized by Xiaowei Wang and Tim Hwang as part of The Bay Area Infrastructure Observatory, MacroCity was founded on the premise that "urban dwellers are often only dimly aware of the numerous, enmeshed layers of critical infrastructure that quietly hum in the background to make modern life possible." 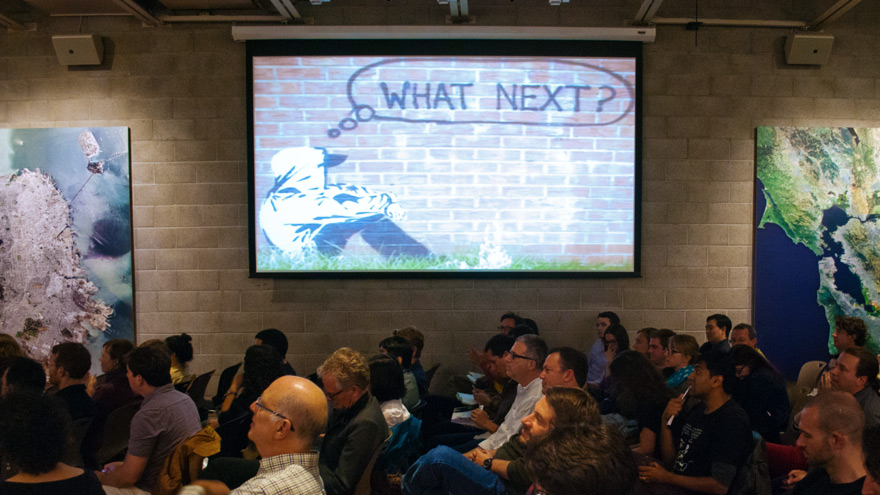 The dangers of these vital infrastructures being too illegible to the average person was palpable throughout the entire two days of guided tours, lectures, and panels. Our highways, waterways, cooling systems, surveillance systems, and more are the main arteries of our society, yet few understand or can even spot them.

The conference kicked off with field trips—attendees signed up for one of the seven options—throughout the Bay Area on Friday, May 30. Since I live in Downtown Oakland and happen to be interested in surveillance, I chose DEMILIT's Surveillance History Walk through downtown Oakland. The walk started at Latham Square, the site of the 1946 Labor Strikes, which has remained an epicenter of infrastructural and surveillance power in Oakland ever since.

Across the street in the Rotunda building is an office of the Department of Homeland Security; Science Applications International Corporation, the fourth largest private defense contractor responsible for making drones, weapons, and surveillance equipment, has a large office just down the street; and the FBI's largest office in Northern California is just north; and the list goes on. 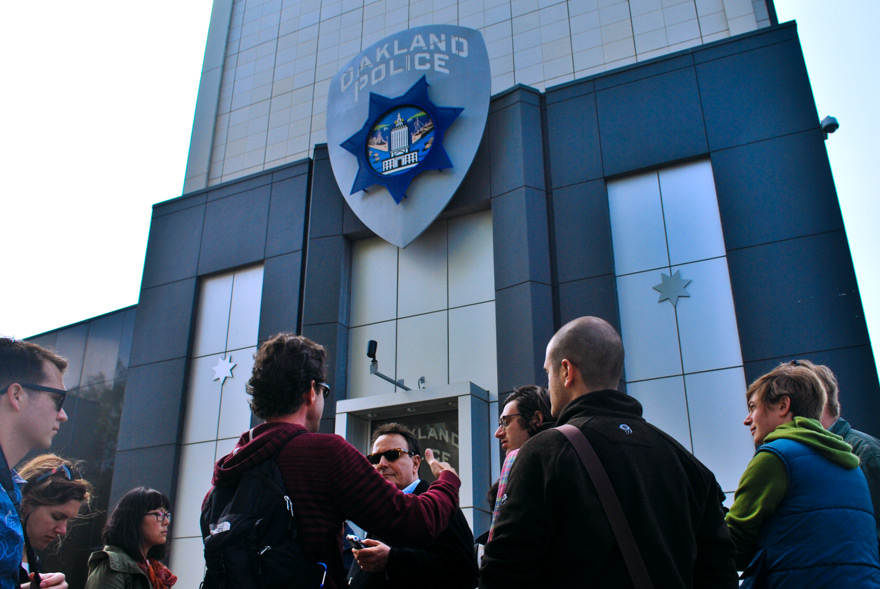 Interestingly, Latham Square is where Telegraph Avenue—named after the telegraph lines laid under it in 1859—ends. What feels like a very distant history remains preserved and reconstituted in the huge telecom hotel owned by AT&T just across the street. What was once telegraph lines over 150 years ago happened to make an ideal site to later lay phone lines, and now is also a wireless tower. This is just one example of how infrastructure design is dictated by key decisions throughout history: It becomes very hard for designers to really reinvent a system, even if the original plans were based on a very different world. DEMILIT's tour made the relationships between all of these systems of power, infrastructure, and urban design blatantly obvious. The most visible aspects of our country's surveillance ecosystem, the security cameras and police cars, are merely one small aspect of a much larger ecology of which we can barely see. While in the Rotunda Building housing the DHS offices, we were not allowed to photograph anything. The security apparatus is designed to be opaque, and while I'd argue the Snowden revelations have shown the level of secrecy has gone much too far, the invisibility of other infrastructures is equally alarming. 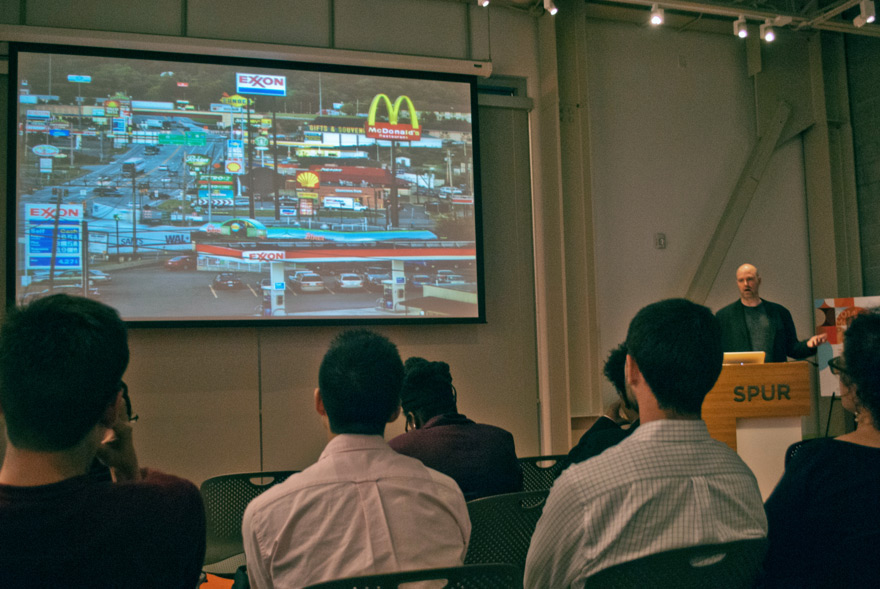 After the field trips had ended, everyone met at SPUR in San Francisco for three lectures. Alex Steffen, Planetary Futurist in Residence at IDEO, gave a startling talk illustrating just how poorly we are designing for the environment. "In the immediate future," Steffen claims, "we are going to decide the habitability of this planet." He didn't leave the crowd feeling optimistic. Steffen says that our massive highways, parking lots, suburbs, and our disdain for big apartment buildings is all part of "a bill we're sending into the future." Speaker after speaker—including those who presented on the second day—confirmed that this bill may come at a great cost. 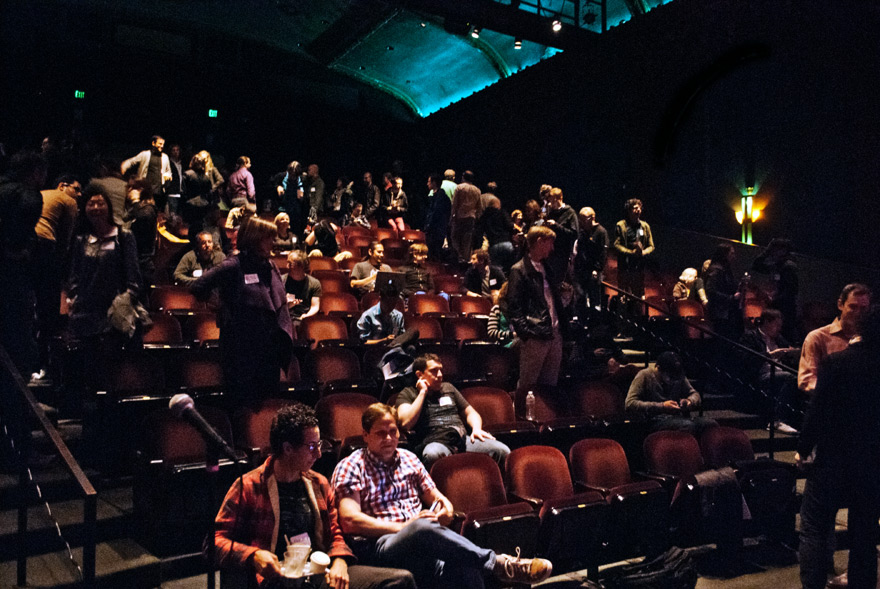 Early the next morning, the conference reconvened at Brava Theater in the Mission District of San Francisco, and the environmental theme remained strong. Laci Videmsky, of Nerds for Nature and New California Water Atlas, is working to map the complex issues of water and water management in California. Although California is currently experiencing a horrible drought and global warming is only going to make matters worse, Videmsky bemoans the average voter's understanding of these issues, saying, "people are quick to forget droughts." The water we drink comes from so far away, we have no connection to the complex processes that bring it to the faucets in our homes.

Even locally, Todd Lapin, blogger at Bernalwood, exposed some of the fascinating and toxic military nuclear waste sites that litter the Bay Area. Boats involved in the Bikini Atoll nuclear tests were sent to the Bay Area to be cleaned. Those boats and the toxic waste they produced remain here, underground. This is an open dirty secret, and much like America's D+ infrastructure rating—which will cost an estimated $3.6 trillion to fix—little seems to be changing anytime soon. 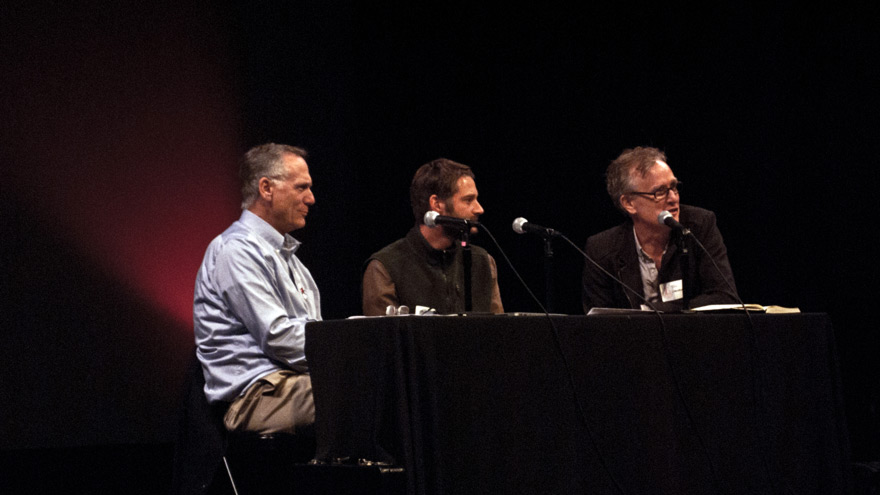 So what are the proposals? How do we design new alternatives or better solutions to these gigantic infrastructures that no longer serve us as well as we need them to? Are they too far gone to change enough for an exponentially growing population in an increasingly hot world?

Bettina Warburg, Public Foresight Strategist at The Institute for the Future, finally offered some real solutions to these problems. Warburg believes that "the maker movement is fundamentally reinventing our cities," and offers a positive future for how our cities can be built and run. Warburg lists their commitment to open source principles, a 'do-cratic' nature, stigmergy, diverse participation, and local activation as vital components to improving our cities and preparing humanity for our future. 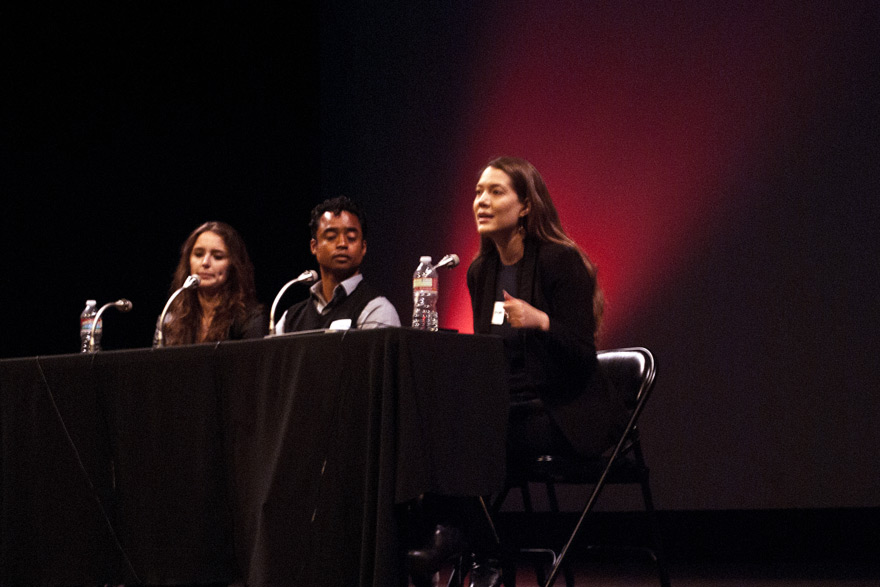 Warburg was not alone in her belief. Andrea Hansen of Code for America spoke of the need to shed light on these complex issues and getting more people involved. Hansen, a self-proclaimed "data-viz and mapping devotee," believes that visualizing these infrastructures is necessary for citizens and designers to begin fixing them. As nice as Hansen and Warburg's ideas are, I wonder if the open source apps for citizen engagement like those made by Code for America fellows are really ever going to scale to meet our contemporary urban landscape—I certainly hope so.

In his talk, landscape architect Marcel Wilson, Founder of Bionic Landscape, noted that "infrastructure is a highly evolved form invented to support life." Indeed, our world's infrastructure is supporting an unprecedented number of people. MacroCity was all about revealing the hidden inner-workings of the cities we live in, in hopes that through understanding them, we can then fix and adapt them to today's needs. Awareness of these systems and instilling a sense of urgency around the environmental impact of our built world is paramount. As Geoff Manaugh of BLDGBLOG mused at the end of the conference, "who controls the sewers, controls the city."