In the Details: David Rockwell Tries to Make Grilling a More Social Experience 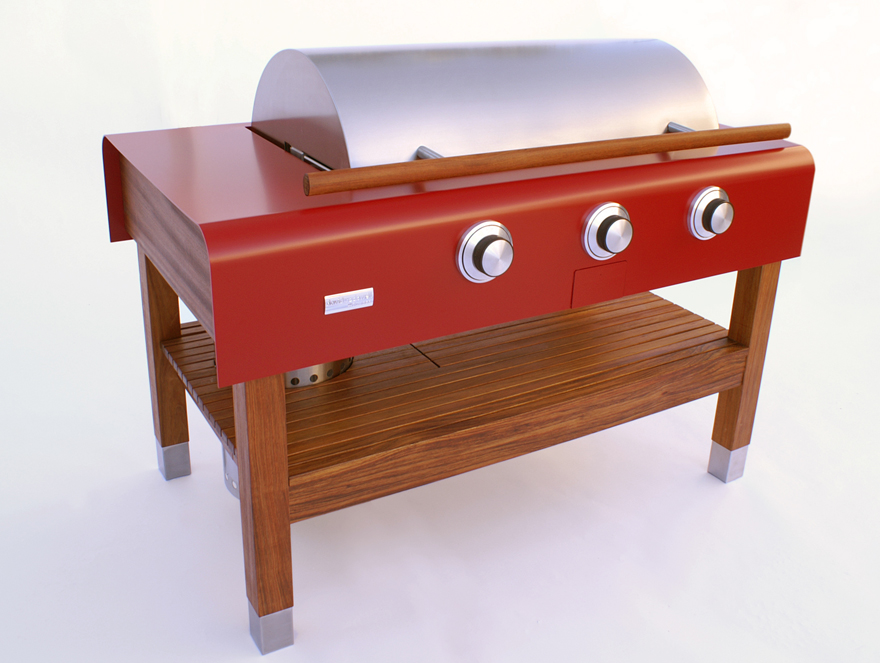 David Rockwell is one of America's most acclaimed interior designers. His firm, Rockwell Group, has designed large-scale immersive environments for hotels and restaurants around the world, not to mention its sets for the Academy Awards and several Broadway musicals. But Rockwell's latest project is one of his smallest yet, and not something typically associated with high-end hospitality—a grill.

Rockwell, however, doesn't see it as a major departure. "We are interested in all aspects of hospitality, from the preparation of food to the experience of eating," he says. "The core of dining—whether you're at a restaurant or at home—is sharing experiences with family and friends, and our grill goes to that." 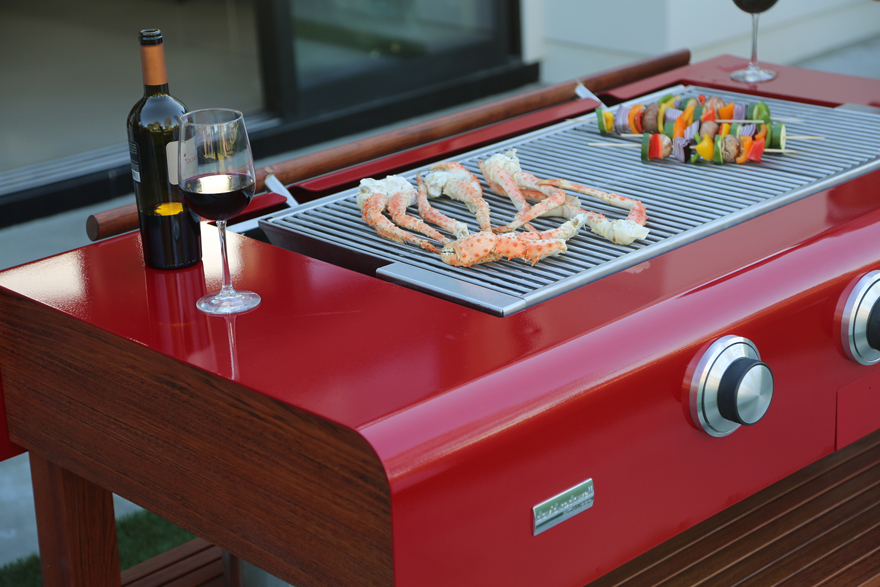 Indeed, the David Rockwell by Caliber Grill is being billed as a "social grill"—which, when you come to think of it, is something of an innovation. Grilling is an inherently social experience, but most grills do not exactly encourage folks to stand around and enjoy the show.

For the Rockwell Group, the biggest hindrance to a shared experience is the typical grill lid, which separates the cook from his or her guests. So the firm's primary goal was to create a disappearing grill hood. "Once we came up with the idea that the grill should be treated like a table with access on all four sides, we worked a lot on achieving that," Rockwell says. "It was a complex challenge, as the firebox needed to be certain dimensions to generate the solid heat for professional grilling, and there needed to be a means to discharge the fat spilling from grill's surface."Those technical challenges were left largely to Caliber's team of engineers, who found a solution that didn't compromise the functionality or aesthetic of the grill. Creating a semicircle-shaped canopy 12 inches tall, the team was able to position it in a way that allows it to completely retract into the surface of the grill, without hitting the gas tank mounted below. The secret lies in a mechanism that locks upon lifting the hood—and which, understandably, Caliber is wary of describing in too much detail (it's currently patent pending). 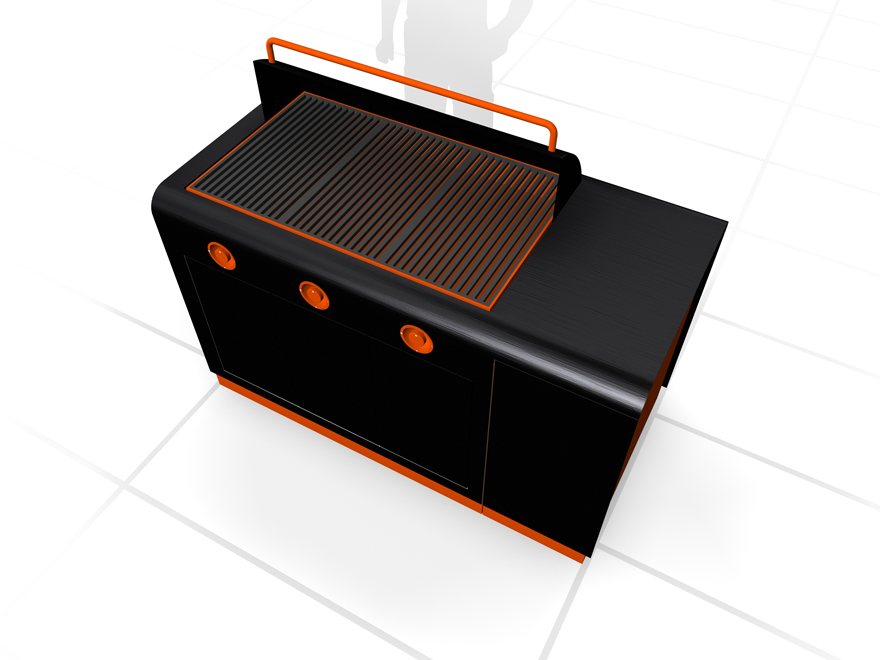 An early rendering of the grill, before the "tablecloth" concept was worked out. 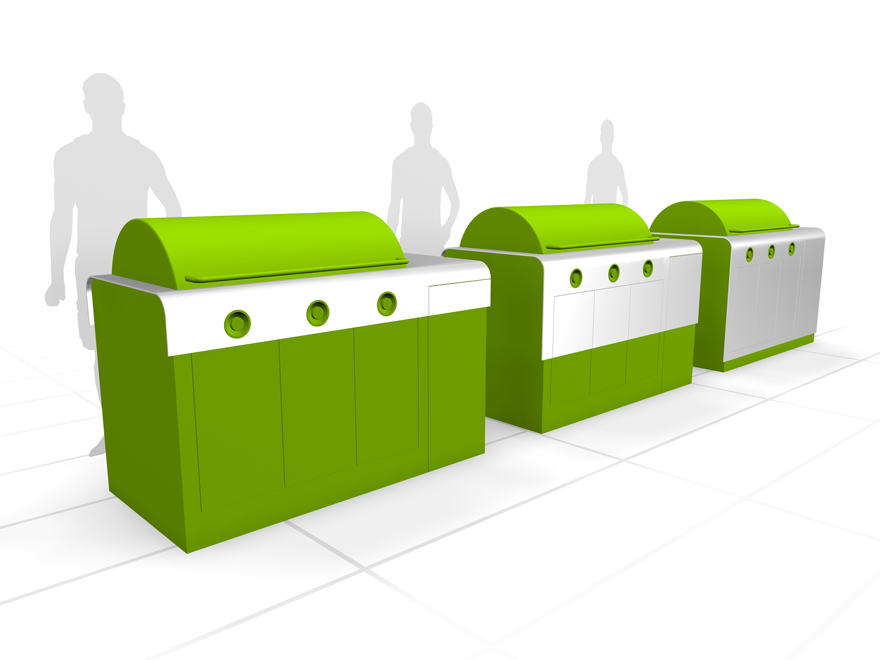 Experimenting with different lengths for the tablecloth 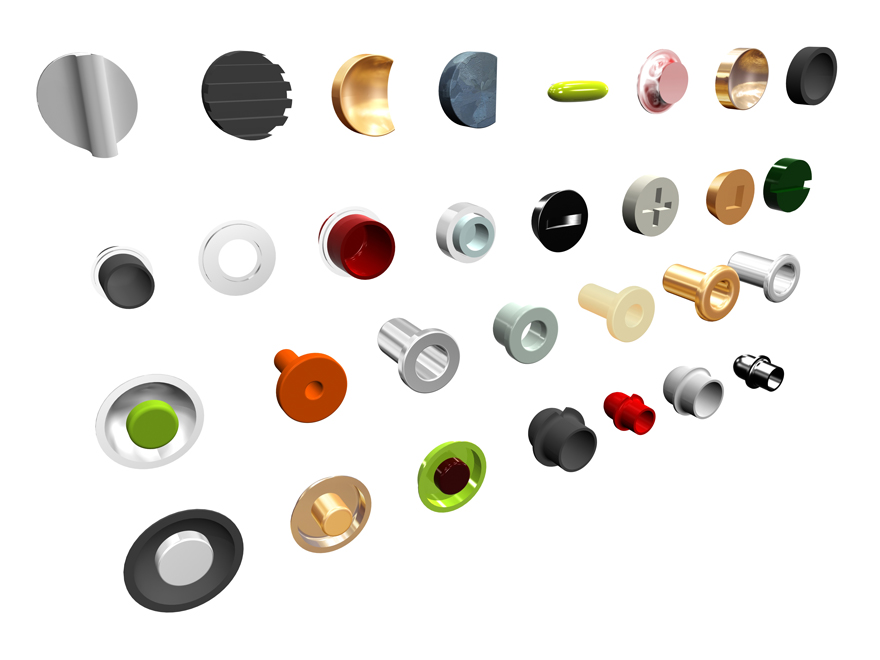 Some of the knob styles considered by Rockwell Group 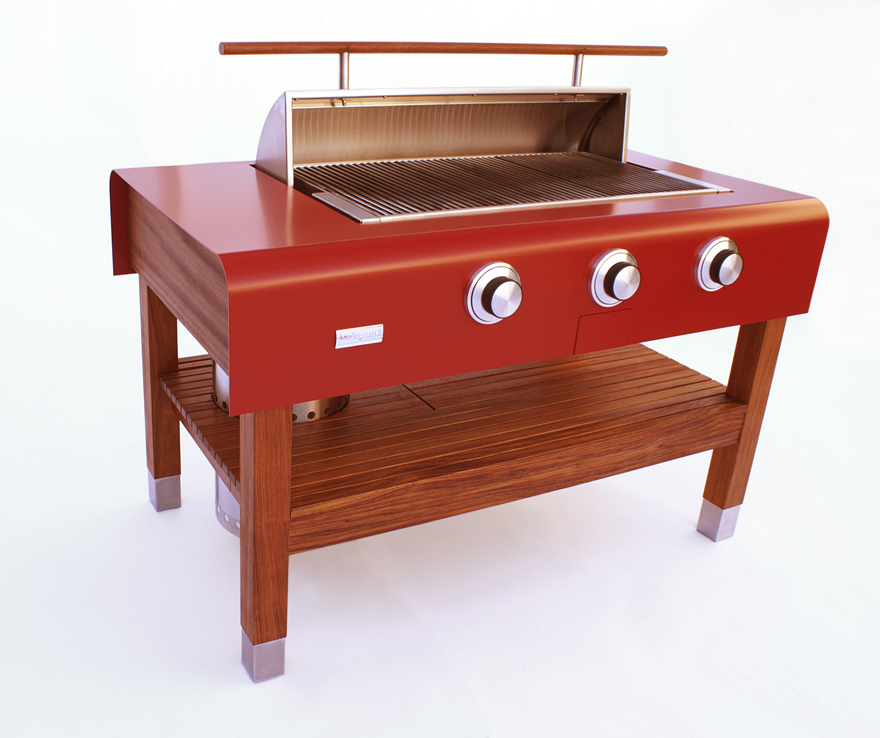 The idea of a table where family and friends could gather also inspired the metal "tablecloth" that wraps over the surrounding surface of the grill and drapes over the edges. The tablecloth is laser cut from a sheet of 1/8-inch-thick aircraft-grade aluminum and run through a CNC press brake to achieve its final form. After being formed, it is hand-inspected and manually deburred before other pieces are welded on to make up the final assembly that will be mounted to the wood base. The tablecloth is available in red, terra cotta, turquoise, or black, allowing users to match it to their overall grilling color scheme.

At 60 inches wide and 30 inches deep, the American-made grill's lavish proportions lend itself to function as a ceremonial table, as does its cherry hardwood base, cut by Caliber's local master woodworker. With the metal hood tucked away, the grill is accessible from all sides, providing ample space for guests to rest their drinks and enjoy a grill-side chat. But all that socializing is going to cost you—the David Rockwell by Caliber Grill has a price tag of $9,500.

In the Details: David Rockwell Tries to Make Grilling a More Social Experience