Nevada Experimenting with Using Drones to Control the Weather

When you think of drones, you probably think of military ones, and viewers of the current season of 24 have watched Army drones targeting innocent civilians in London. But if the Desert Research Institute in Reno, Nevada has its way, drones may soon have more to do with Al Roker than Jack Bauer.

That's because Nevada's DRI hopes to control the weather using drones. Their Weather Modification Activities division, in conjunction with the Federal Aviation Administration, will begin using drones to seed clouds and create rain.

While it sounds like science fiction to most Americans, cloud seeding is real (if hard to accurately control). Officials in China fired over 1,000 rockets into the sky during the Olympics, gaming a storm into dumping its water before it got to Beijing.

The way cloud seeding works is, silver iodide or dry ice is fired into clouds using ground-based anti-aircraft guns or rockets. It can also be dropped into clouds via airplanes. These compounds then cause a chemical reaction in the clouds that create water or snow to form. The Sacramento Bee reports that "California has been seeding clouds for at least six decades," and points out that "Once viewed by some as a fringe science, cloud seeding has entered the mainstream as a tool to pad the state's crucial mountain snowpack." 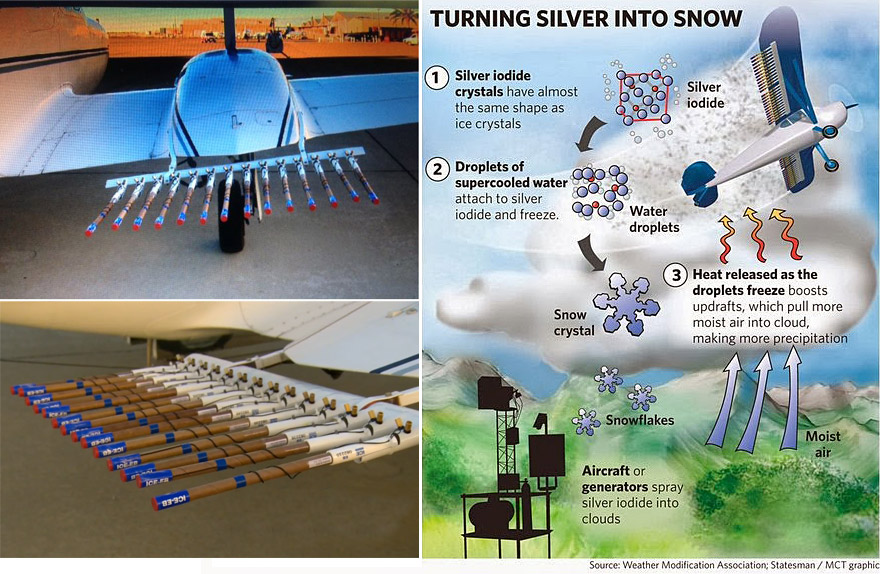 Dry Nevada, of course, wants to use cloud seeding to alleviate drought. The reason they're looking into drones is for their economy. As Jeff Tilley, DRI's Director of Weather Modification Activities explained to Accuweather:

Fuel is one of the factors that drives up the price of airborne seeding and Tilley sees that as the area where the UAS could provide the most difference.

"You can very quickly go through a budget for a year's supply of fuel during one storm if you're not careful," he said. By using smaller, lighter drones, which weigh less than a typical seeding aircraft, the fuel cost difference would be substantial.

"Fuel is expensive, pilots are expensive and often in a storm you have to go up and down multiple trips," he said.

Using drones, especially in areas with mountainous terrain, could be a safer way to reach the clouds that sit close to the terrain itself. Manned aircraft cannot presently reach such clouds due to FAA regulations on the proximity of aircraft and terrain.

Nevada hopes to be a leader in the field of drone-based cloud seeding. And there's no wonder why: Tilley estimates the practice will become "a $90 billion revenue-producing industry."

Nevada Experimenting with Using Drones to Control the Weather