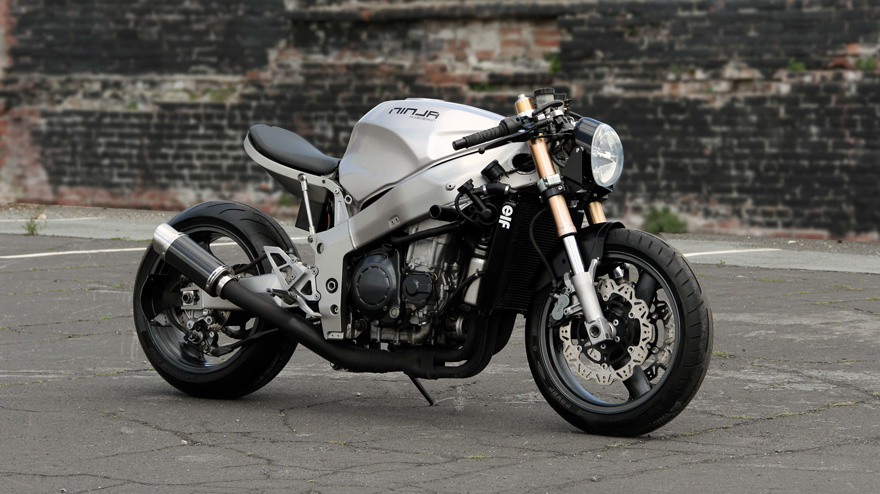 You probably have that one project. It's a little stupid, a little outlandish. It wouldn't fit into your real work, unless... you changed your work. Bill Webb is a partner at Huge Design, and he rides motorcycles. With a tech-heavy background in product design, Bill had always thought of designing a custom motorcycle but never had an excuse to try. It took some bad luck and a deep appreciation for bike design to make it happen.

After selling off all his motorcycle gear to start Huge four years ago, a friend gifted him a tired old Kawasaki zx7 Ninja. Despite its slightly regrettable "purple David Bowie" graphics, he rode the bike daily... until it was stolen. They recovered it from a San Francisco tow yard, parted out and bedraggled, and began thinking about what to do with it. Two years later, the bike has a completely different—and very distinct—personality, reinvented by its industrial designer owner. The resulting design is a stylistic blend of two very different aesthetic schools, pulling elements from both café racers and streetfighters together in a slick, stripped down package. To unpack the complex project Bill walked us through his inspiration, design and build process.

To combine elements from two very different styles of custom bikes (café racer and streetfighter) and create the "café fighter." Café racers have been the hottest trend in the custom motorcycle scene for the last few years. The café racer usually starts with a Japanese street bike from the mid-70's. Unnecessary parts are stripped off and usually the seat/subframe area is heavily modified into a very minimal, flat single seat. Because the bikes are 30+ years old, there is very little technology to deal with and the bikes pretty much design themselves once all the factory parts are removed. The CB750 is probably the most used-donor bike to create this look. This style is pretty popular with hipsters and city riders who value the raw urban vibe of these bikes.

Street fighters by contrast are usually modern sport bikes that have been spun into aggressive-styled mean machines with wild graphics, neon lights and loud colors. Usually the streetfighter starts with a modern sport bike that has been stripped of its racing plastics. Without the plastics, these bikes can look a bit raw with random bits of electronics and plumbing exposed that were never intended to be seen. These bikes celebrate the ugliness and own it as an aggressive, mean aesthetic that the owners take pride in.

Our goal was simple: apply the honesty and proportional beauty of the café racer with the raw aggression and performance stance of a modern sportbike/streetfighter... and call it a café fighter. 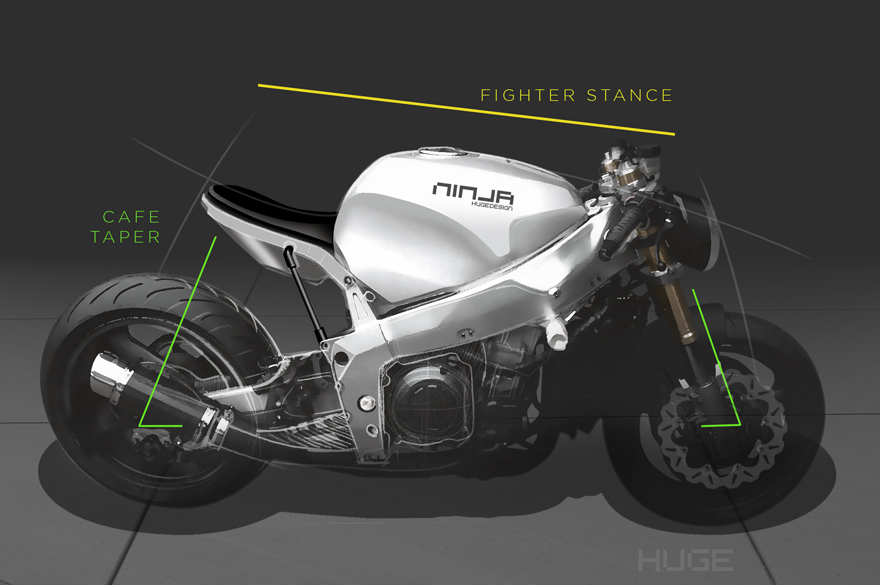 Creating our canvas in 3D

In order to convey the café racer stance, we need to capture the minimal proportions and chopped tail of an older machine using the much bigger and more complicated sport bike. Modern sportbikes fill the bloated tail section with crucial parts (coolant reservoirs, electronics, relays, wiring harnesses) that all need to be re-housed and kept functioning on the bike. The biggest challenge was redesigning the seat/subframe area into a more minimal single seat proportion that incorporated all the necessary internal components from the original sportbike. The industrial designer eye and CAD skills were crucial.

We found a Ducati seat that fit the proportions of the bike perfectly and would allow us to pull off that minimal, single seat look. After taking detailed measurements of it, as well as all the functional components that had to be housed underneath, we set out in 3D CAD re-creating the rear area of the bike so that we would have a precise '3D canvas' of the subframe area. At this point, we are dealing with just another industrial design challenge in 3D space: creating a compelling design statement while satisfying all the 'product' constraints of housing internal components, structural needs and functional requirements. With the vision sketch as our goal, and the 3D space as our canvas, the actual design came easy.

Once we had nailed the design in CAD, we lined up one of our trusted modelshops to machine the subframe part out of a solid 110lb block of aluminum. He joked that it barely fit on the CNC bed. After a few days of machining it was done and sent back. 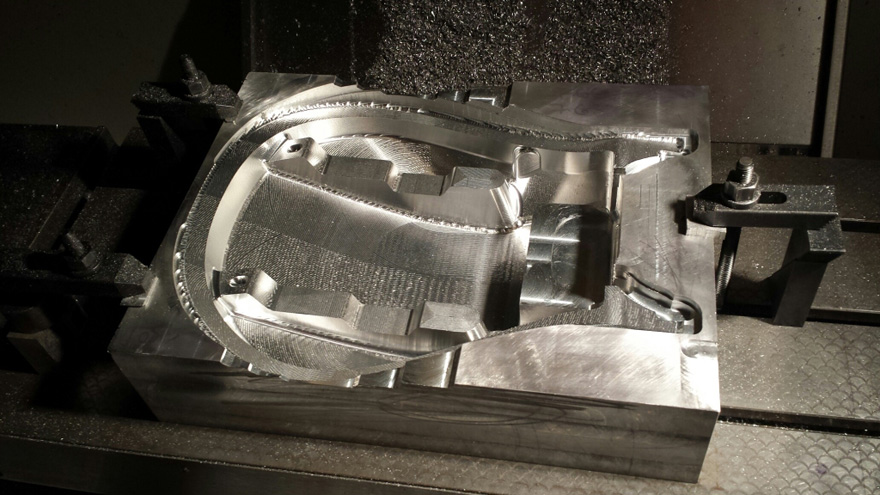 We wanted to convey a classic, honesty with the finishes while allowing the more modern exposed sportbike components to visually fit in. We tried to use as little paint as possible and no colors. We wanted the whole bike to feel like a collection of metal bits and components in their natural state...much like the CB750 cafe stuff you see. This meant that any part that need to be painted would be done in a metal finish or in black... no bold sportbike colors! We had the paint/frame professionally painted subtle shades of silver and spent a ton of time on ebay looking for all the random bits that would fit the design. Lowered front and rear, got a meaty 'streetfighter' 190 rear tire, a LED integrated brake light, Harley Vrod headlight. 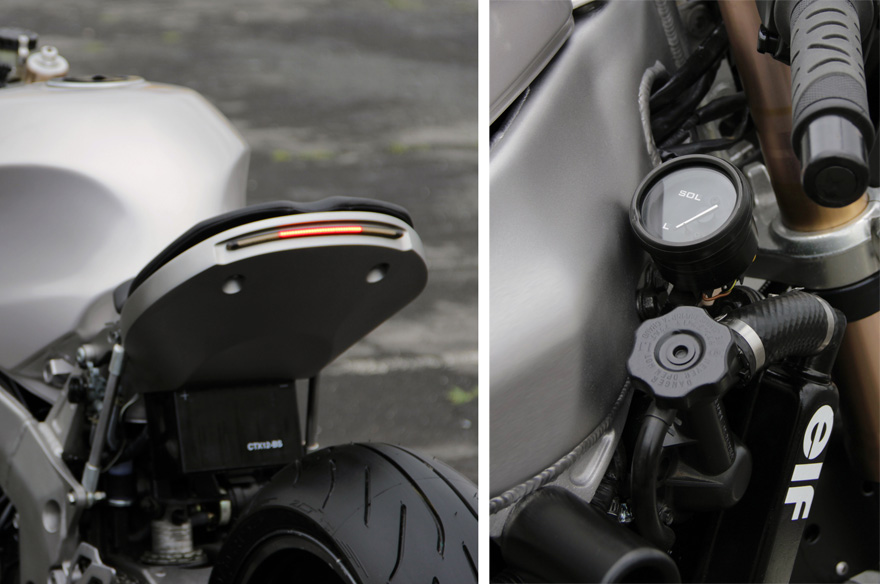 I wanted as few gauges as possible, but didn't want the engine to blow up on me so I decided I needed to integrate the temp gauge. The original temp gauge looked silly with orange graphics so I cracked it open and decided the temp gauge was really my life-line for the engine while riding so I changed "Low" to "High" into "Low" to "SOL"... gotta have a little fun with it.

For more photos and a proper gearhead review check out the Bike EXIF treatment of the HUGE reimagined Ninja.