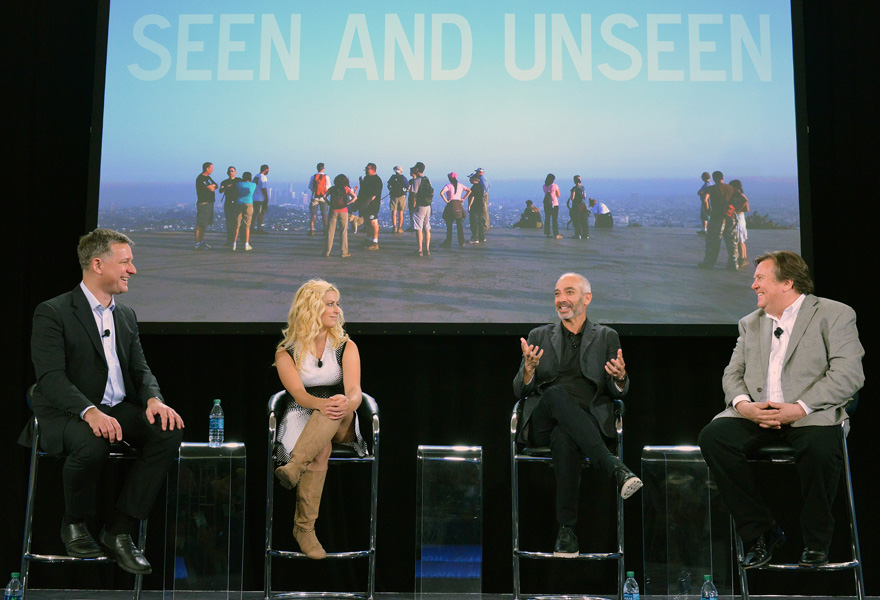 With any career, there are a lot of details that get lost within a job title. Someone looking in from the outside can have a hard time knowing exactly what a designer does when it comes to "deciding" what products, services, software, hardware, etc., are going to look like as finished products, to say nothing of his or her other responsibilities. The exploration into the many hats of a designer was exactly what was addressed at the "Decoding Design" panel discussion earlier this week, the second event in the "Designing Innovation" series presented by Ford and IDSA. By bringing a game designer, an automotive designer and a product designer together, moderator and author Robert Tercek bridged the gap between these industries, addressing topics revolving around the way designers create experiences that connect consumers to the products that they choose to live with.

The event started out with introductory presentations from each panelist, who elaborated on their current projects and other design thoughts. Ford's Moray Callum, the first to take the stage, spoke directly to the audience about how important it is for designers to focus on creating an entire journey—not just a specific product. "You're either seduced or you're not," he says of the first impression a car gives. "Design has to set an expectation—it needs to deliver and complement prior experiences." The second panelist, NewDealDesign's Gadi Amit, briefly shared his work rebuilding and reimagining devices like smartphones and handheld cameras. Having worked with wearables and consumer products, as well as software and hardware, Amit framed these issues in a broader context, beyond the dashboards and heated seats of Callum's work: "A lot of the problems we have now with the technology world is getting more and more options out there."

Game Designer Jane McGonigal added a comedic touch with her attention-grabbing statistics on the current state of game play and the positive effects it can have. While the numbers provided concrete evidence for McGonigal's insights, her biggest message came from defining her job as a designer as composing the perfect achievements for gamers before taking on the actual visuals. Here are a few of my favorite data points from McGonigal:

Tercek was the final one to share his background with the crowd. With his introduction came the idea of vaporization, or the eventual disintegration of technologies into more all-encompassing products—like how the iPhone does not just replace a mobile phone but also obviates everything from cameras to music players to maps. While all of the panelists come from different career paths and walks of life, there were a few overarching topics brought up and discussed important design themes and questions that span much further than the individual designers onstage. 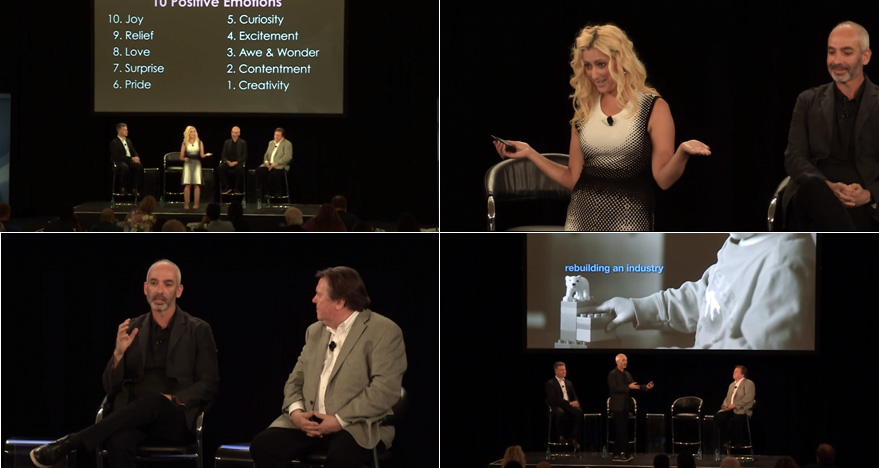 After the individual presentations, the panel fielded questions from the audience and Twitter. One tweeter questioned the methods in which designers orchestrate emotion from the user through their designs. Jane started by discussing the way in which she starts with a personal accomplishment and reins in the emotions that gamers want to feel from their games—creativity, contentment, awe & wonder, excitement, curiosity, pride, surprise, love, relief and joy. She took this point further by sharing a bit of explanation into a project she worked on with a public library. "I created a game where by the end of it, you've written your own book," she says. "It can be printed on-demand, it's added to the library stacks and the gamer's name is added to the library's author list." Amit also tuned into a sense of accomplishment with his response: "The critical moment for every physical or non-physical product is the second where you've actually been exposed to it and you understand what it does for you," he says. "Then it hits you in both a cerebral and emotional way. You understand the utility and it creates a delightful moment."

Callum offered a more traditional take on the subject. Driving, and automotive design, has a permanent spot in the hearts of people around the world. As Callum mentioned, "People remember their first car—it's very emotional." In the spirit of "vaporization," Tercek did bring up the possibility of cars becoming another victim to disintegration of service-based innovations—Uber, Lyft, autonomous cars. Callum recognizes this and said, "We need to retain the emotion in a vehicle."

The Miscommunicated Definition of Design

As mentioned before, not everyone really knows what a designer does. Callum captured this sentiment wonderfully during the discussion: "In our industry, we suffer from being seen as a stylist," he says. "Design is such a dangerous word in so many ways—it can mean so many different things to different people." Gadi mirrored this sentiment when it comes to how design is consumed. "If there's something we all share, it's that that definition is a miscommunication about design," he said. "For me, it's the tactility of the 7–10 years? People still crave their own visceral experience with the object. People buy old motorcycles because they can fix them up. You can't fix new ones in the same way." 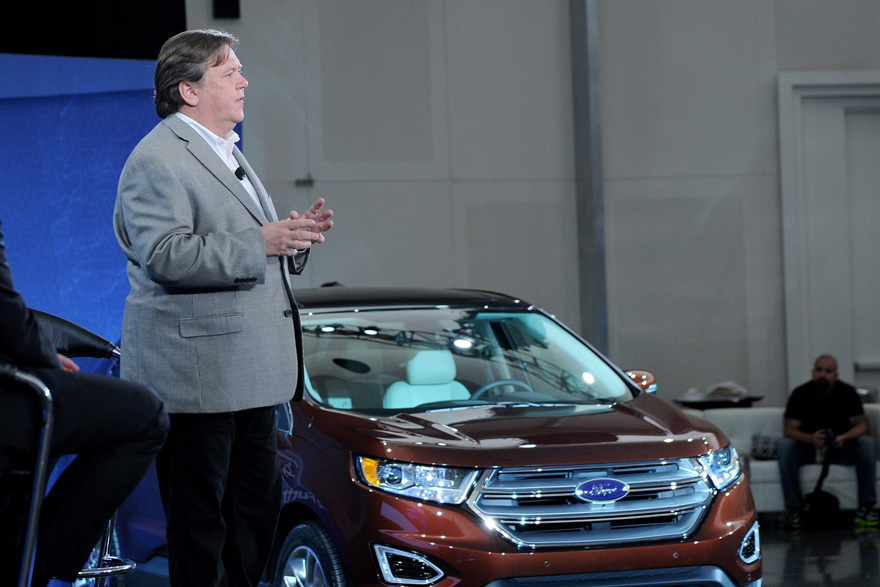 The very premise of McGonigal's job represents an unconventional approach to the design process. Another question from the audience asked whether or not design is "purely visual" or if it engages the other senses. For McGonigal, the visual aspect is perhaps the least important element, as her interest lies in "how you structure and experience... for me, it's much more about designing your motivation."

How Far Is Too Far?

With so many opportunities becoming available as technology grows and continues to vaporize products, hardware and software, the point of saturation is a real concern. But as Amit mentioned early on, there's still a lot that needs to be brought to the market in terms of end user options before anything starts getting ruled out. In fact, he's come across an unexpected issue when it comes to the big talk of design's far-out future: "The tech industry has a strong tendency toward hype," he said. "One of my biggest problems in what I do is to pull away from that hype and find somewhere to anchor." The anchor, he has found, is within human reaction. "If we see that smile of delight, we know we're on to something." When it comes down to it, the focus will always be on making the end user feel they best they can—not about creating the most appealing design or taking out the most residual products in its wake (although, as Tercek had mentioned, this is something that's happening because people want it to). While this specific question remained unanswered at this panel, I imagine that all involved would agree that it's worth an entire discussion of its own.

Of course, this is a mere synopsis of the "Decoding Design" event—in case you missed it, here's the video of the panel discussion in full (starts at 11:00 or so):