Fascist Symbolism and the Evolution of the Game Ball: 80 Years of World Cup Poster Designs 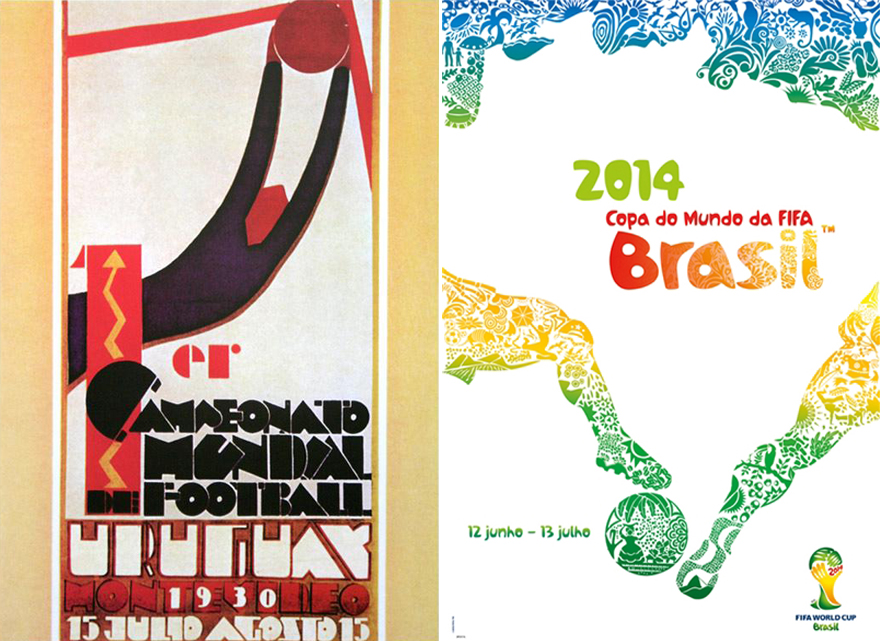 Well at least we had a good run, thanks mostly to one Tim Meme Howard; now it's just a question of whether it's unpatriotic to watch the Germany-France and/or Brazil-Colombia matches go down tomorrow or politely abstain in observance of Independence Day. Either way, here's yet another trip through World Cup history (we previously took a look at ticket designs from 1930 to present day). Here's a roundup of noteworthy designs from 80 years of World Cup posters—read on to find out how fascism made its way into one design and when choosing the final poster became a matter of public opinion. 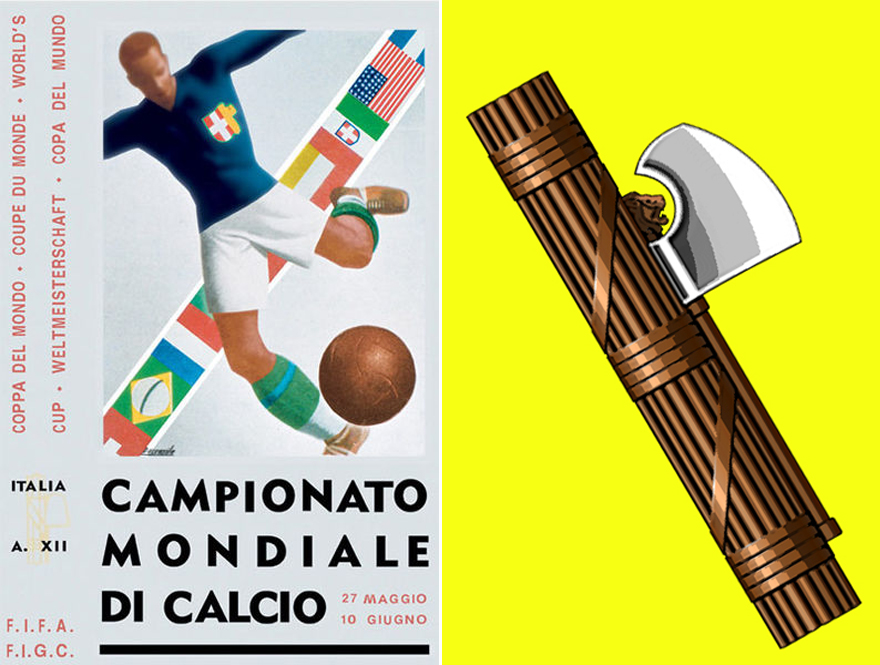 As Il Duce of the host country in 1934, Mussolini took the international spotlight as a way to promote fascism through tournament-themed propaganda. Can you spot the subtle fascist symoblism in the poster? Hint: fasces are represented by a bundle of sticks that comprise the handle of an axe. An abstracted variation appears on the player's jersey, next to the flag—it looks something like a gold tetris block—while a watermarked seal is hidden behind the "Italia, A. XII" text at bottom left.

The authoritative symbol is meant to represent the power and jurisdiction of the magistrate, but it actually turns up far beyond the borders of Italy and fascism: The fasces historically appear in heraldry, including various government seals and symbols of our very own federal government. You can find the fasces inside the White House's Oval Office, on either sides of the American flag behind the podium of the United States House of Representatives, on the Lincoln Memorial, on the base of the Statue of Freedom on the United State's capitol building—the list goes on. 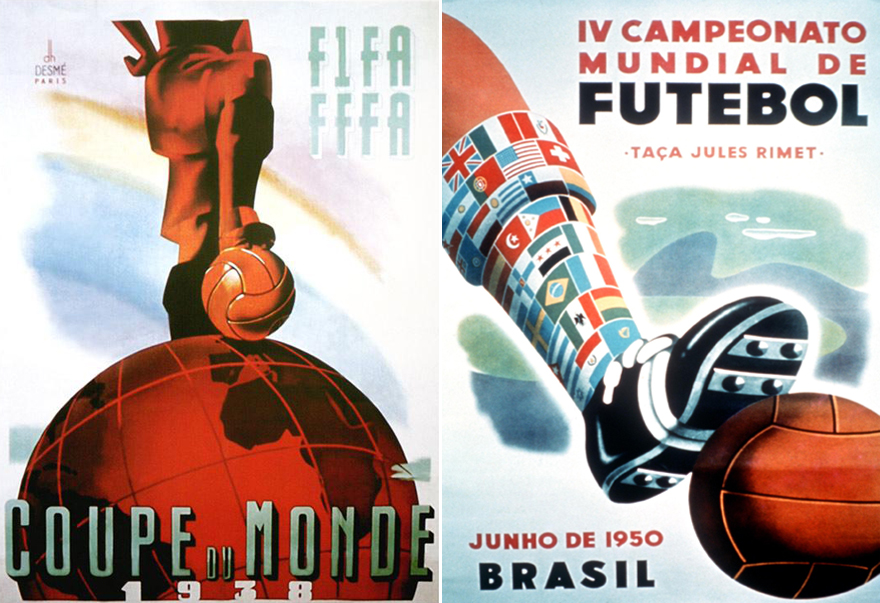 The game ball is main attraction in the 1938 and 1950 posters, for tournaments in Paris and Brazil, respectively (the two intervening tournaments were canceled on account of the war). The 1938 poster features the last lace-sewn game ball—prior to Wilson's star turn opposite Tom Hanks in Castaway, "Allen" was named after the ball's French manufacturers—which was made up of 13 leather panels instead of the usual 12. Like the ball depicted in the poster design, the ball's namesake wasn't printed on the one that was actually kicked around. The actual Allen ball made an appearance at the beginning of matches for pre-game photo ops, but was switched out for an unadorned version for actual game play. According to one account, this was one of the first examples of brand creep in the World Cup—though they didn't achieve the exposure afforded by inclusion in the poster design.

In terms of ball design, lace sewn game balls were nixed in 1950 in favor of a design that allowed the ball to be more easily inflated using a pump. Until the pump was introduced, few people knew how to properly inflate the game balls—it was a delicate task and it was very easy to end up with a lopsided ball. The 1970 cup in Mexico saw the introduction of the iconic black-and-white Telstar; the New York Times has an excellent interactive feature on World Cup balls, if you're curious. 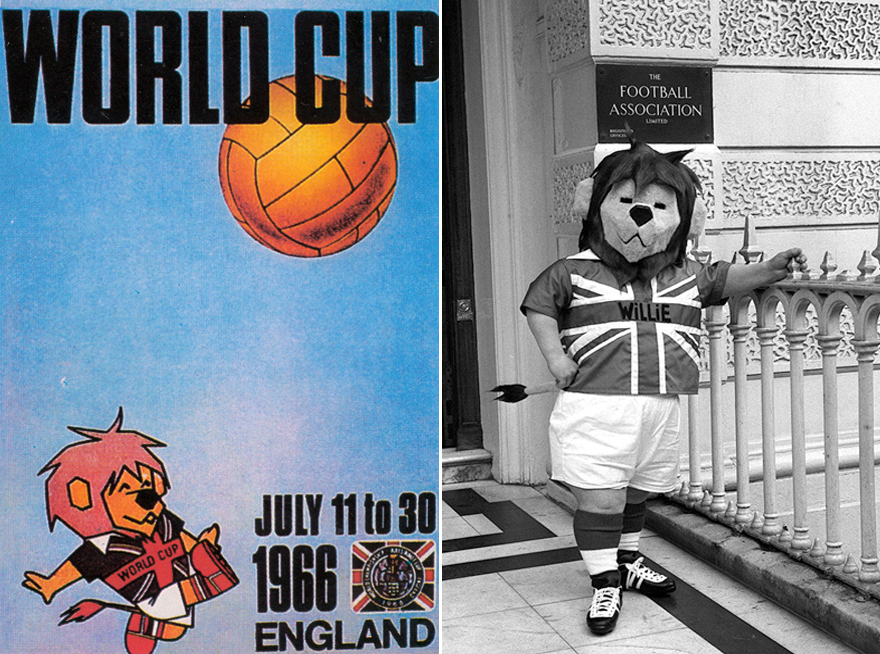 The first ever World Cup mascot, Willie, makes an appearance in 1966 and is one of the few mascots to make it onto the poster design. Willie, who dons a Union Flag jersey, was illustrated by freelance children's book artist Reg Hoye. 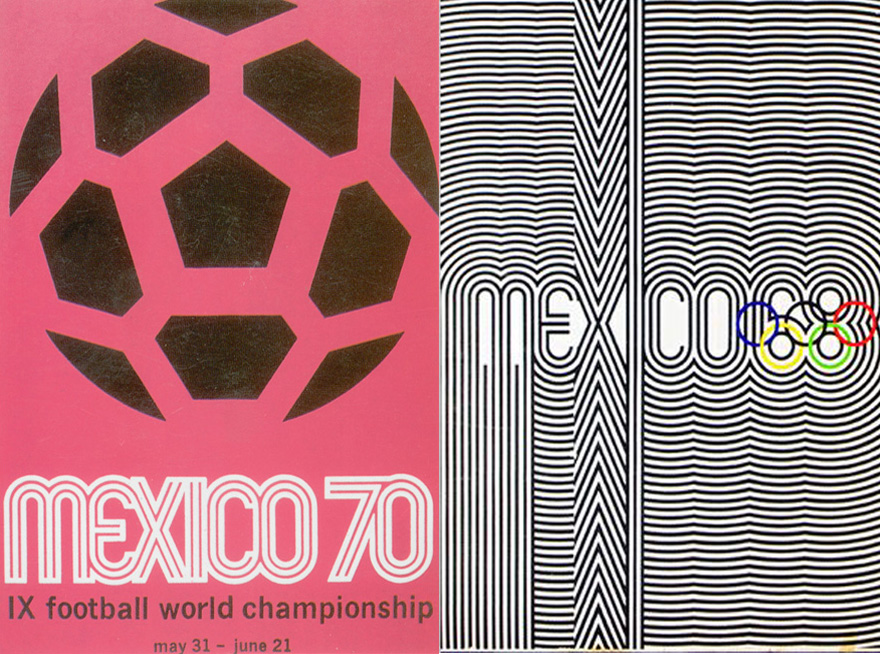 Mexico's poster might be my one favorites, mostly for its bold, candy-colored palette, something that hasn't been featured on many of the poster designs. The country also hosted the 1968 Olympic games, and you might notice that their World Cup logo looks familiar. 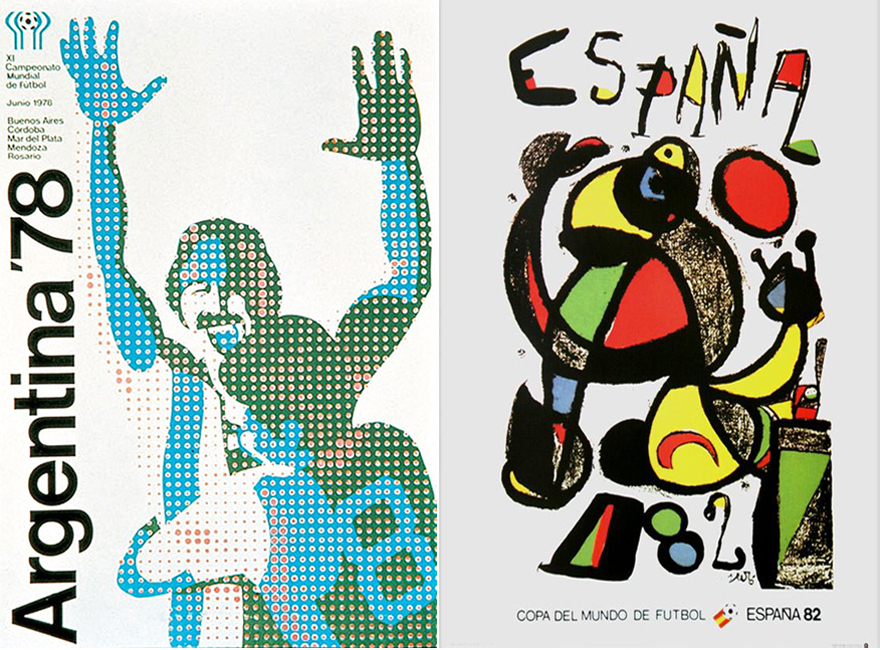 Argentina's civil unrest and government coup bred anxiety among tournament participants and viewers alike in 1978. While the official poster depicting two celebrating teammates is shown above, speculation about the country's human rights abuses spurred the creation of a few unofficial poster designs.

So too was Spain in a period of transition during the following World Cup, rebuilding after Franco's demise in 1975; as the story goes, Joan Miró was recruited for PR efforts, including the poster design for the 1982 tournament, featuring a soccer player in the painter's signature style. He passed away the following year, but his poster design became known for helping introduce the world to the new democratic Spain. 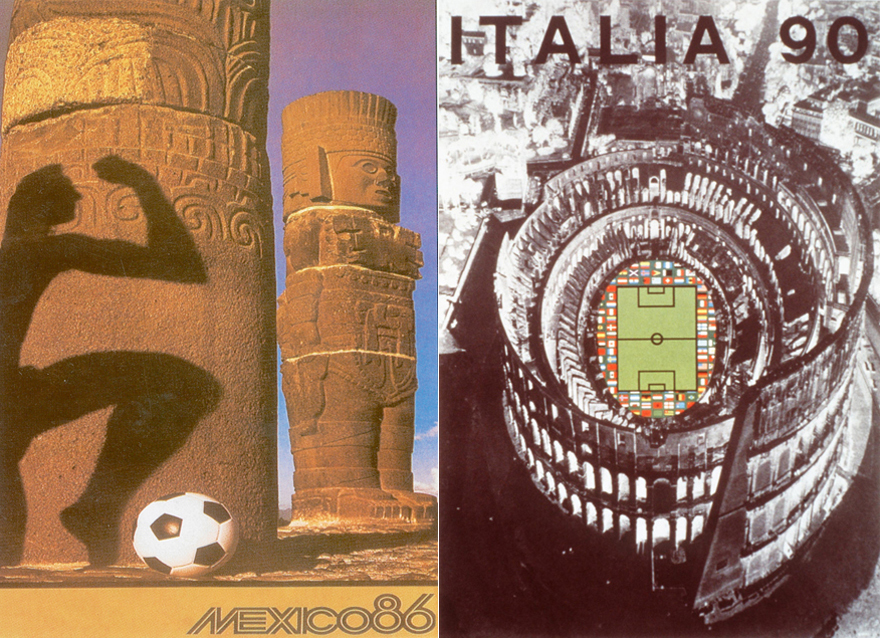 In 1986, Mexico once again hosted the games and Annie Leibovitz became the first photographer to be commissioned to shoot and design a World Cup poster. The 1990 poster, created by Italian artist Alberto Burri, features a digital image of the Coliseum, superimposed with a field featuring the flags of the participating countries. The green field is meant to represent soccer at being at the heart of Italian culture—hence its space among the national landmark's walls. 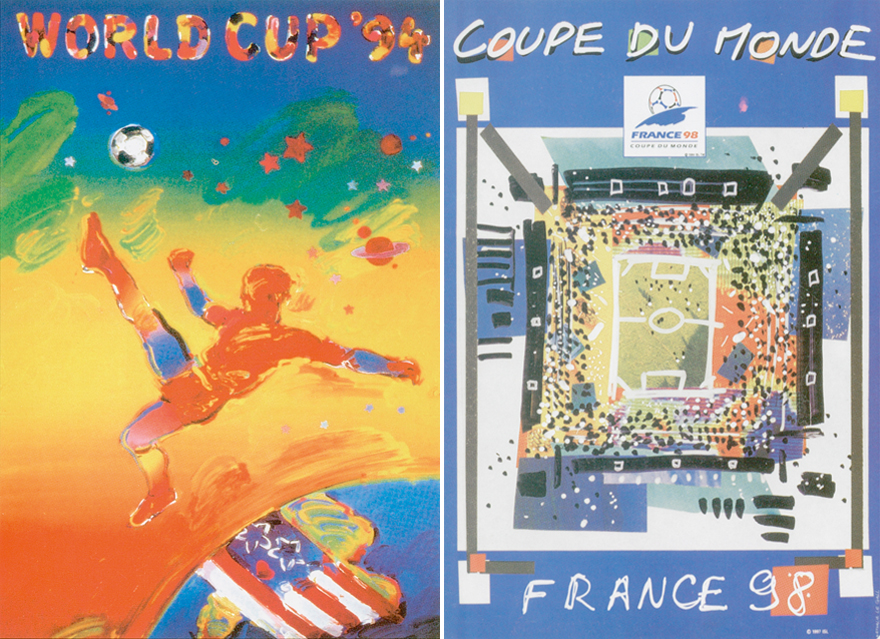 The posters of the mid-'90s reflect the illustrative trend in stark contrast to the International Style typography of previous years. One Core77 editor summed up 1994's typography perfectly: Friends (the TV show), which actually makes sense, given the show's popularity at the time.

Meanwhile, France's 1998 poster, which echoes the aerial vantage point of the 1990 poster, originated with a national design competition. The winner, then 27-year-old Nathalie Le Gall, looked to capture the emotion and color of the beautiful game with her hand-drawn submission. Nailed it. 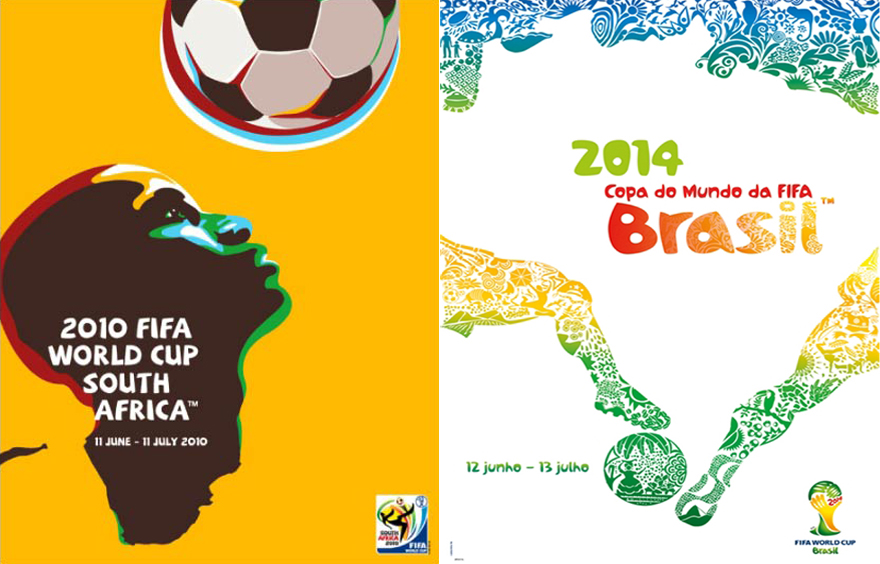 The public became a part of the poster process in 2010, voting on favorites from a batch of submissions. This brings us right up to present day with this year's patterned design—which, might I add, makes great use of white space.

Do you have a favorite? Share in the comments.