Luca Nichetto on Being Addicted to Process, Feeding Off His Employees' Energy, and Why Young American Makers May Be Missing Out 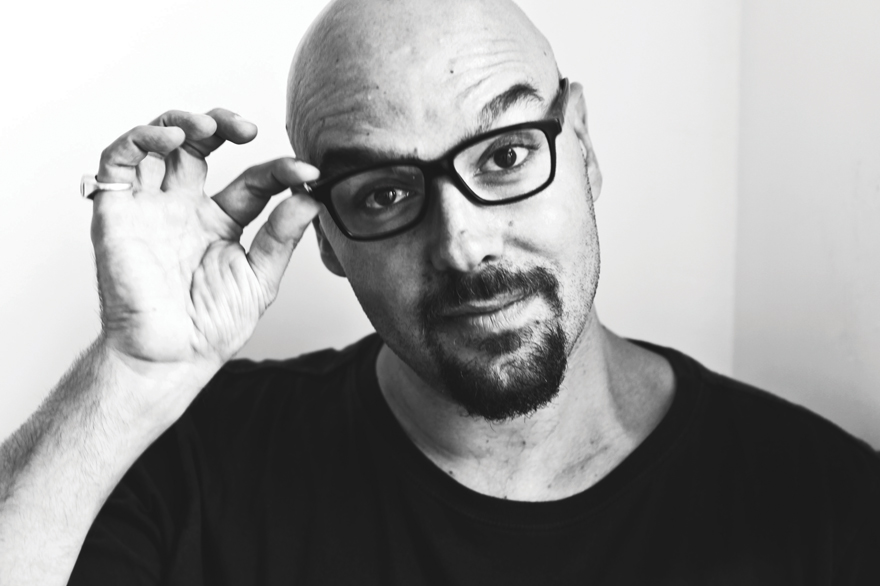 This is the latest installment of our Core77 Questionnaire. Previously, we talked to Albert Chu of Otaat.

Current projects: I'm working on a new sofa family for a Danish brand, as well as creating a new furniture collection with De La Espada. We showed several of the De La Espada pieces in New York last May, and we'll show the complete collection in Paris in 2015. I'm also working with several other clients that I've had long-time relationships with, including Foscarini and some Scandinavian brands.

Mission: Right now, I really like to think about design as not only a way to make products and to create profit, but also as a nice platform for creating community. Whether it's a small object or a big architectural project, after the idea has come up from your mind, you immediately start to have other people involved in it. And these people involve other people, so it quite quickly becomes a small community that's working based on your idea. And this means that design is a really good tool from a social point of view, because it can create work and opportunity, and also help people have beautiful things around them. 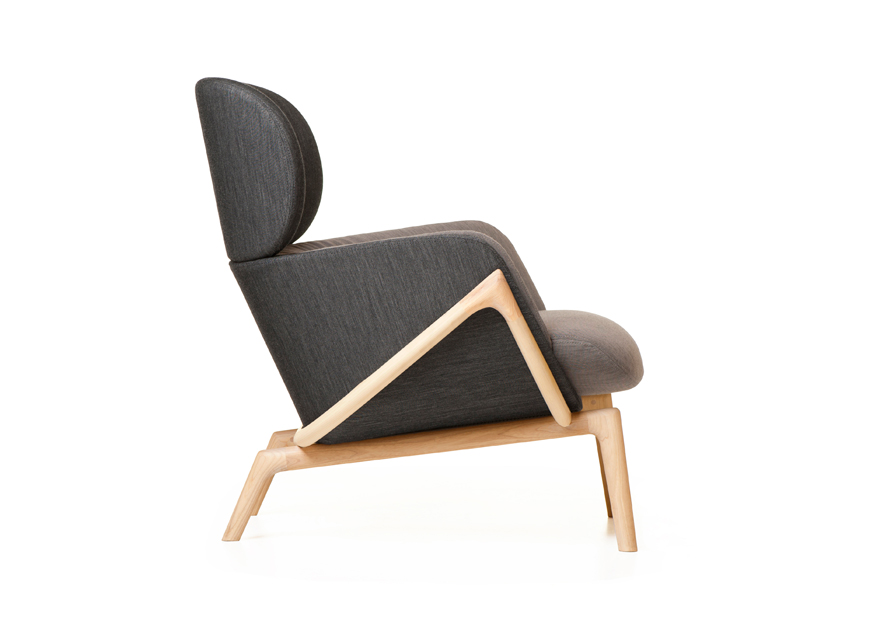 Above and below: the Elysia lounge chair, part of Nichetto's new furniture collection for De La Espada 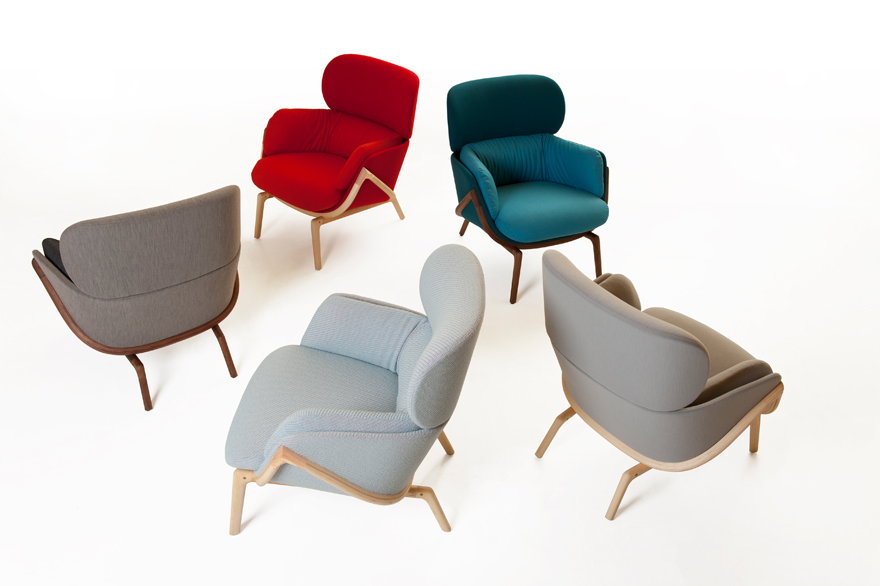 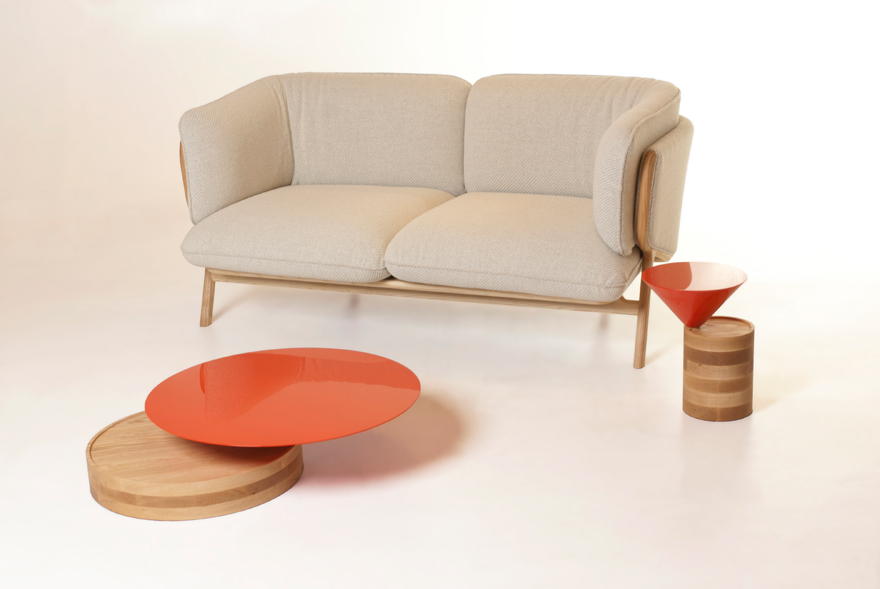 When did you decide that you wanted to be a designer? To be honest, I didn't decide. I grew up in Murano, a small island close to Venice famous for the production of glass. From when I was a kid, this super-creative environment was normal for me. And I was lucky to have a good talent in drawing, so the natural step was to study in art school to design glass. After school I started to design some pieces in glass, but without the idea that this was a job, to be a designer. Then I met the art director of Salviati, a famous brand in Murano, and he asked me if I wanted to design something for them. I designed a series of vases that quite soon became best sellers for the brand. After that, I started to look around, thinking about what I want to do, and it was a natural step to work on lighting. So I started to work with Foscarini, and in 2003 I designed a lamp called O-Space that gave me the opportunity to make some money and to run my first small studio, and also to be recognized by other brands. There was a company from the furniture industry that approached me, and I started to think about what I was. And I discovered that I was just starting a career as a designer.

First design job: The vases that I mentioned before. Their name is Millebolle; I designed them in 2000 for Salviati.

Who is your design hero? I have many design heroes. I really love design; I'm addicted, in a way, to the process. Because design, in my opinion, is not only about making objects but it's also a kind of philosophy. So my heroes change depending on the time of my life. There are moments when I greatly enjoy the Scandinavian masters like Jacobsen or Wegner. Other moments I'm really into Castiglioni or Magistretti or Sottsass. And other moments I love the Eameses and Saarinen. It's really difficult for me to say I have one hero. 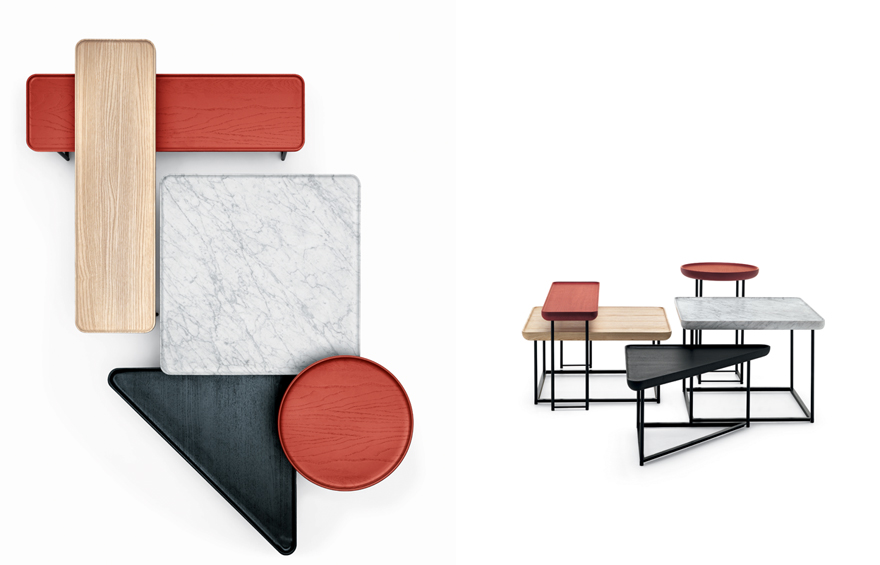 Torei side tables for Cassina 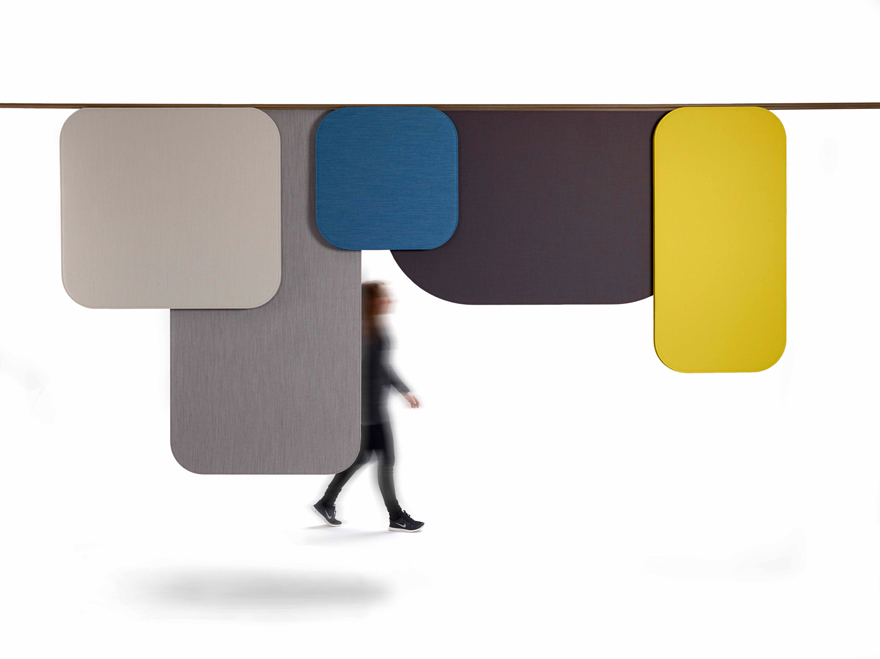 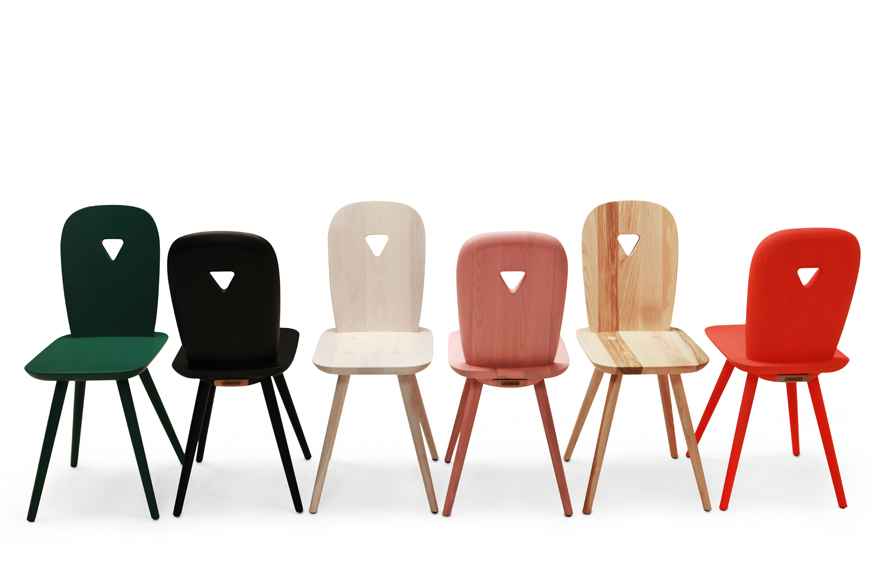 Describe your workspace: My two studios are pretty similar. They're open spaces where there is a meeting area, a huge table where my collaborators and I work together, and bookshelves full of prototypes, materials and samples. I think both of the studios are nice places to be. I don't like to work in a classical office space; I like more of an informal way. Oh, and in both studios there is a kitchen, because I like to sit down with the guys and talk during lunchtime.

Other than the computer, what is your most important tool? It is definitely not the computer. I always start with sketches and then make prototypes, like small models and so on. After that, we can try to do some rendering and modeling with Rhino. But I'm not so into the super-nice 3-D models. For me, the most important thing is the idea behind the project.

What is the best part of your job? Working with the workshops of different clients. It's the part that I really enjoy—seeing the first prototypes, changing stuff, understanding what could be a problem, resolving that, coming to a compromise that makes sense. I'm pretty much an old-fashioned designer in that way, because I truly believe in the relationship that you can create with the people you're working with, and that there you can do the best work.

What is the worst part of your job? The star system. Having to hang out, go to the parties and the inaugurations and everything related to the promotion part. The networking is important, for sure, but it's also important to be focused. 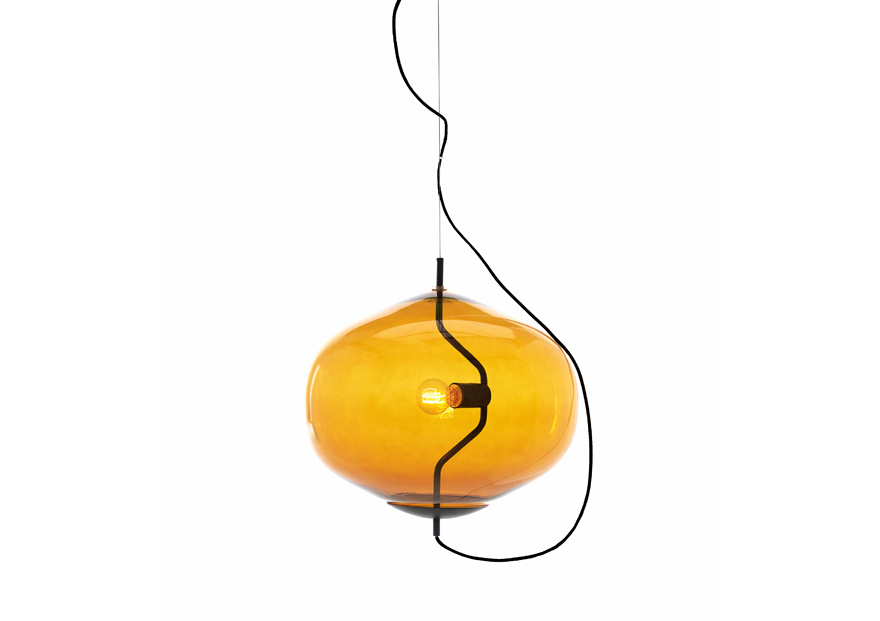 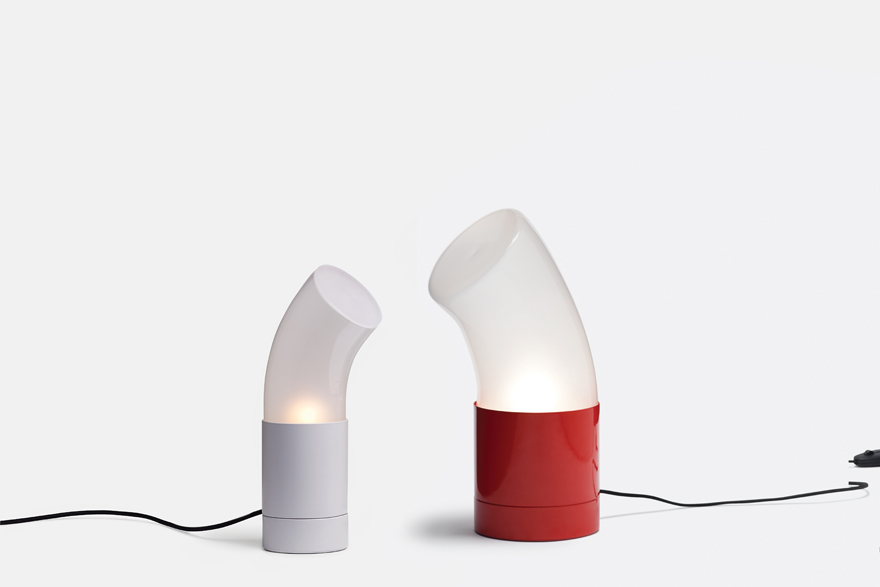 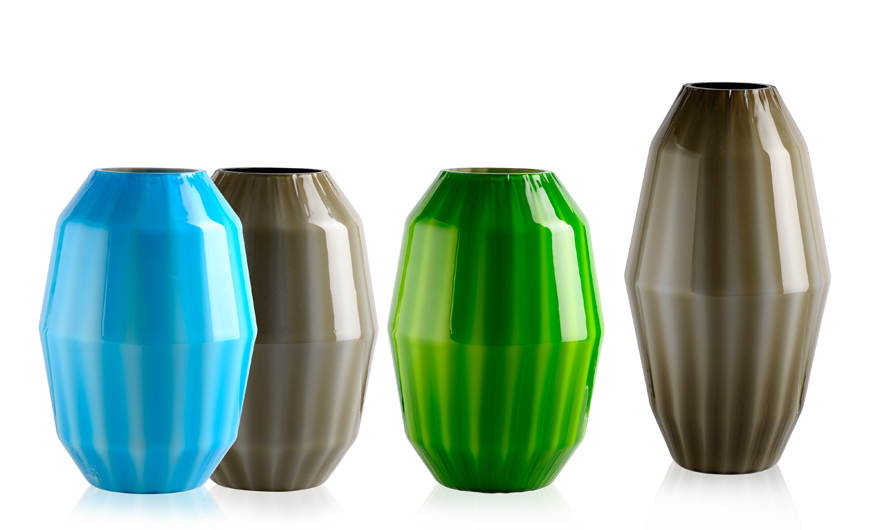 How do you procrastinate? I love to go to the cinema. I like to hang out with old friends that are not involved with my business, and talk about things not connected with my work. And because I'm traveling so much these days, I really enjoy spending time at home, just reading a book or doing simple things.

What is your favorite productivity tip or trick? Probably coffee? I'm Italian, so coffee for sure. But also, for me, it's really important to feel the energy of people around me. If I can see that the people I'm working with are happy with what they're doing, this gives me a lot of positive energy and enthusiasm for my work.

What is the most important quality in a designer? There is no one. In the past, probably it was important to have a talent in the creative point of view, but today design is multidisciplinary work—so there are different moments in the day or in your career that you need to be a little bit a businessman, a little bit a lawyer, a little bit an economic consultant, a little bit an artist and so on. It's many, many different skills that you need to have. And if you don't have one of them, I think it's a problem. I don't think that having a huge talent is enough. I've met so many super-talented young designers, but sometimes you can see that they don't have an idea about how to run a business. You are doing products that someday you need to sell, or that somebody needs to sell for you. So you need to have an idea of the industry connected with what you are doing.

But this may be a really European idea of design, because when I was in New York for Design Week, I felt that there is a completely other idea in the U.S. about the figure of the designer. It's much more connected to the artist point of view. Meaning that there are a lot of young designers that are makers, and there are galleries that represent these young designers. It's only my opinion, but I think this is completely the wrong way. Because, for me, being a designer means that you're doing something that's connected with the idea of mass production. I think it's a good exercise to be a maker for a while, to understand it, but after that if you want to call yourself a designer, you need to work with companies, with industry. Otherwise you will have so many limitations. Because let's say you're working with glass or wood or another traditional material—you will never have the opportunity to work with a company that will offer you the idea to do a chair in plastic or to do a lamp in steel. One of the most beautiful things about being a designer is that every day you have the opportunity to learn something new.

What is the most widespread misunderstanding about design or designers? One is how much we are paid for what we're doing. The system of royalties is a really odd way to work, in my opinion. Or maybe the percent that companies normally want to pay us is really low compared to what they pay a sales person, for instance. Sometimes the company doesn't understand the proper value of the idea that the designer is giving them.

Another huge misunderstanding, for me, involves design education. The design schools are producing too many graduates; in reality, there is not work for all of these people. In a way, the schools create a fake idea that it is possible to become a designer in the same way that it was in the past. But it's not true. 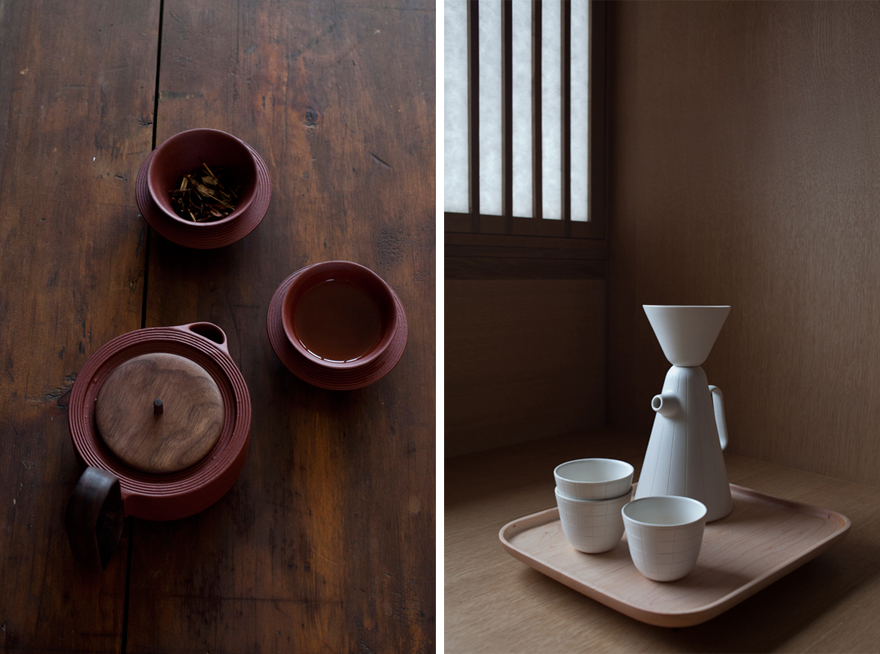 The Aureola tea set (left) and Sucabaruca coffee set (right and below) are the result of a collaboration between Nichetto and Lera Moiseeva for the Canadian brand Mjölk. 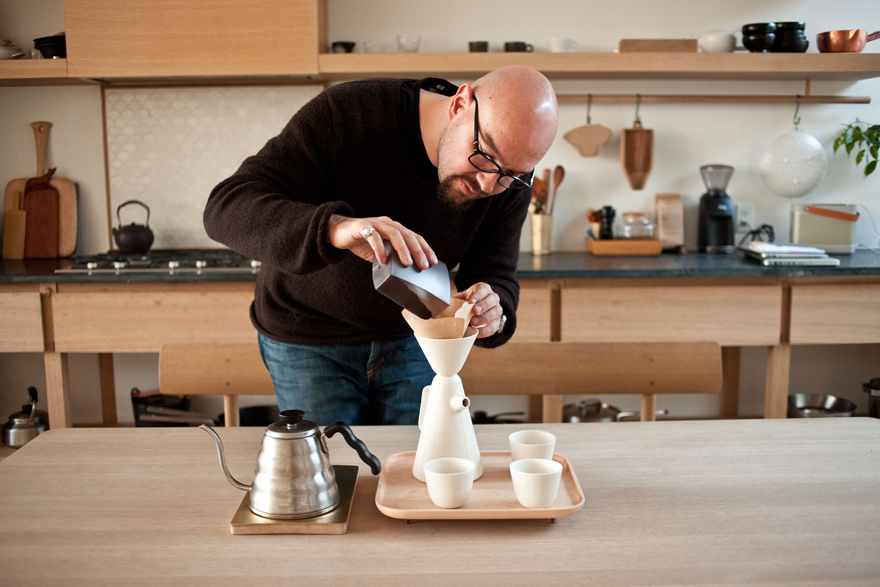 What is your most prized design possession? There are many, but I especially love my cobra phone. It's one of the first Ericsson telephones. To dial the number, there's a wheel on the bottom, and then there is a kind of horn shape that becomes the speaker. This is amazing for me; it's a beautiful object.

What is exciting you in design right now? This is a good question, because I had a huge talk in New York with some friends about that. And, to be honest, at this moment there is not something that really excites me. I think we are living in a quite special moment, where we need to figure out what will be the next step that will be exciting for the designer and attractive for the customer.

If you could redesign anything, what would you choose? The airport. I hate the idea of airports right now. I hate the process to get into the terminal; I hate to wait for the scan. Especially when you start traveling a lot, you can feel how much time you are losing. It's not that I want to have less security, but I think we really have to think about what is possible to do to make this kind of place much more enjoyable.

What do you hope to be doing in ten years? A design week in Tahiti? No, seriously, I would love to have the opportunity to do design in a way that I can help people that live in countries that are not so developed. I don't want to become a kind of missionary, but I'd like to continue the design we're doing now and also think about what we can offer people that really need a chair or that really need a roof. So I hope to think in a more social way, and to be able to play with that.