Internet of Things Coming to a Home (Depot) Near You: Wink Smart Home App to Launch with First Collection on Monday, July 7 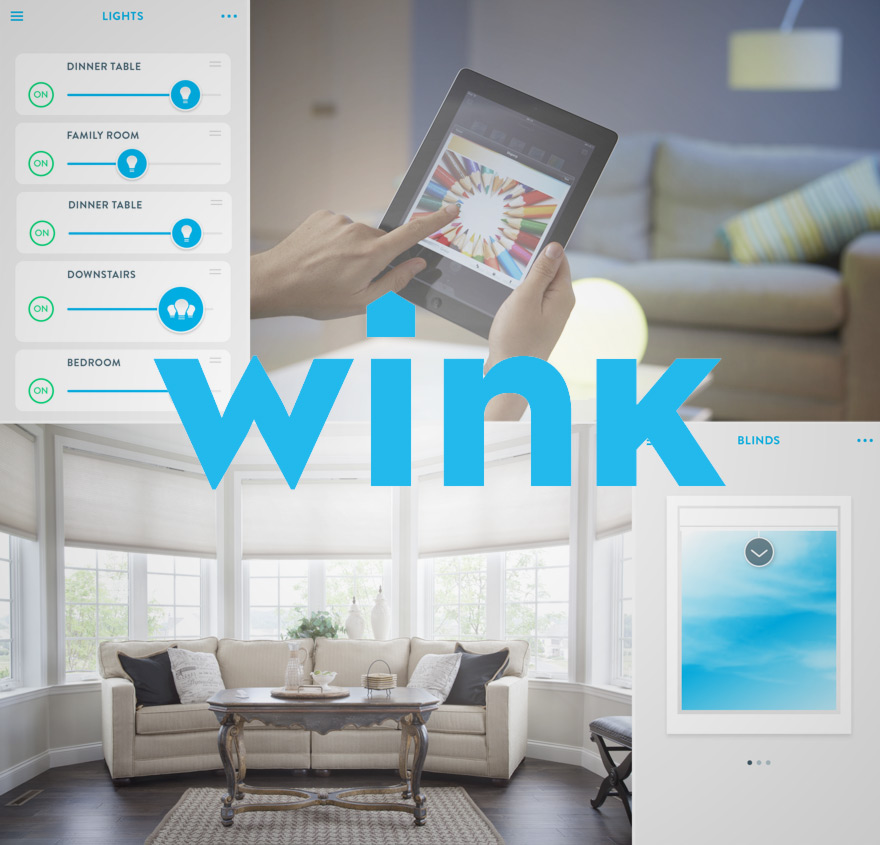 By now, it seems like the conceit of a 'home of the future' has existed for as long as we've taken residence in permanent structures—while subsistence cultures certainly didn't fret over replacing HVAC filters, our domestic life perpetually bears the promise of being easier or more comfortable. But even as sci-fi films offer tantalizing glimpses into a swipeable, location-aware near-future, the app-enabled abode has proven to be an elusive dream as we once again crank up our noisy old air conditioners, much as we did with barely adequate space heaters just four months ago.

Well that's the case here in New York City, but for those of you who live outside the endemic constraints of shady landlords and co-op boards—and,to some extent, even for those of us who do—the fabled smart home may be appreciably closer to becoming a reality with the launch of a new collection of products on Monday, July 7, thanks to a new free app called Wink and your local Home Depot.

It's not a retail partnership in the traditional sense: Wink is a software ecosystem for other networked devices and appliances. It relies on a single piece of hardware, a pointedly nondescript white box that will likely gather dust alongside your modem and router—plugged in, of course, but scarcely touched after initial setup—since the entire interface is accessed via smartphone. Several Wink-enabled products will work without the hub, which facilitates networked communications for less deeply integrated products; compatibility is clearly indicated by labels on the packaging. 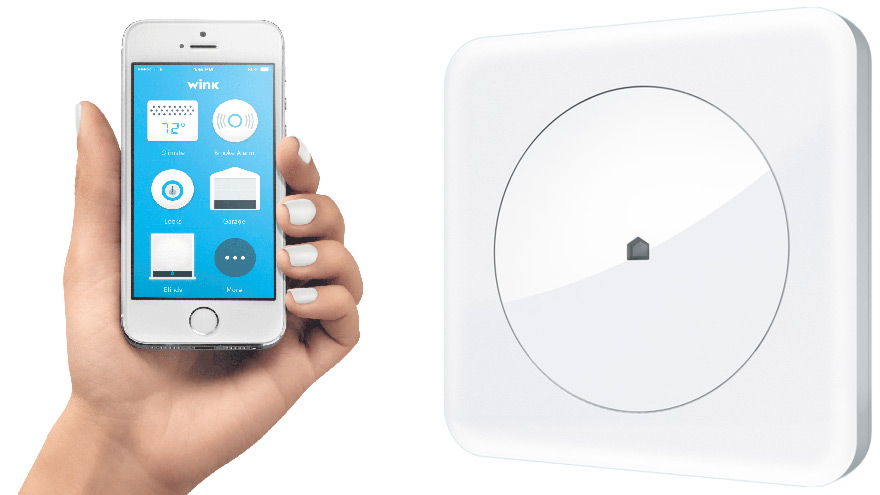 Nor is it a 'collection' so much as the launch of the app and 60 compatible products from 15 well-known brands, including literal household names such as GE—who have partnered with Wink's parent company Quirky to produce a series of networked products—and first mover Phillips to smart sprinkler startup Rachio and tech darlings Dropcam. So too does the selection run the gamut from entry-level light bulbs (GE & Quirky have developed one for $15) to more advanced products such as motorized curtains, deadbolts and garage doors. (Both the Wink Hub and the products will also be available via Amazon, though the displays at Home Depot will drive awareness and in-store sales.)Brett Worthington of Wink demo'd all of the above in a pop-up showroom that they had fabricated in a bona fide Manhattan loft, complete with a faux garage as the pièce de résistance. Sure, there were a few hiccups along the way—the garage door complied only after a 40-second delay—but the slick app and the mostly acquiescent appliances made a strong case for connectivity. The app boasts an open API as well as basic if-statement functionality (somewhat confusingly called 'robots'); a simple example is to set a geofence around one's home so that the air conditioner turns on when he or she is, say, five minutes away. Worthington was also quick to note that pre-cooling actually saves energy and money, as it obviates the max-out-the-AC-as-soon-as-I-get-home strategy. Indeed, conservation and convenience are the twofold benefit of most of the use cases, mapping onto the quotidian concerns of climate control, privacy and security.

Home Depot, for its part, had long been seeking a partner to wrangle all of its smart home products into a single, non-subscription-model ecosystem. SVP Giles Bowman noted that his company has engages in a dialogue with its vendors and encourages them to consider adding networked features but only goes so far as to make an introduction with the Wink team, who handle the tech integration. As far as Bowman is concerned, 99% of end users don't care about network protocol or compatibility (in addition to Wi-Fi and Bluetooth, the Hub can communicate via Z-Wave and Zigbee); they just want something that works. To that end, Home Depot is offering discounts on the Wink Hub for combined purchases—its MSRP is a reasonable $49.99 but it's effectively free with the purchase of two Wink-enabled products. 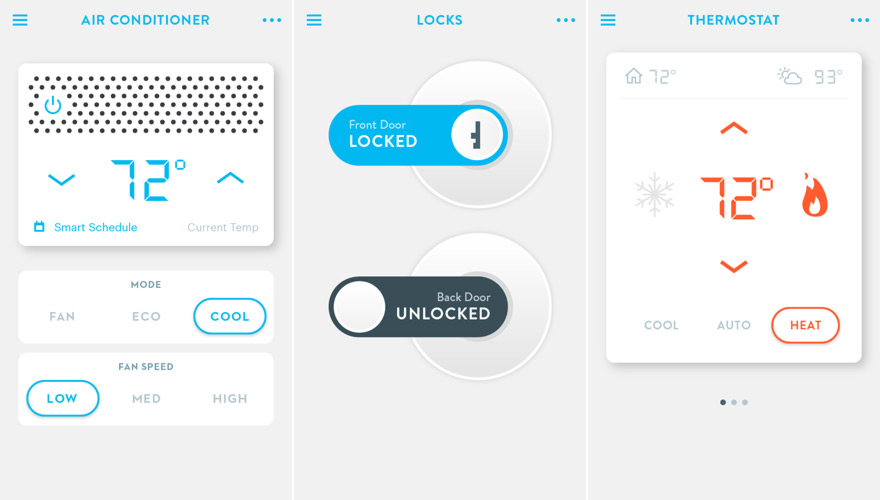 Of course, it's an experiment for all of the companies who have skin in the game, and the scale of the initiative—rolling out at some 2,000 stores nationwide—is as much a broad effort to gauge hypothetical interest as it is a mass-market debut for Wink. While a plug-and-play CFL makes sense as a low-risk point of entry, a smartphone-controlled lock or garage door might make for a harder sell (Worthington emphasized the security features and high level of encryption even as he acknowledged that data would be stored in the cloud). Meanwhile, the Rheem water heater is the big-ticket item of the bunch and has perhaps the longest lifecycle of the 60 new products at launch; indeed, appliances with 10+ year lifetimes will likely be the last ones to see widespread adoption, especially considering that their development cycles are proportionally longer as well.

That said, the success of this first concerted foray into the mass market may well spur demand for more connectivity in the domestic sphere—it may only be a matter of time before an app-controlled Wolf range (or at least a smart microwave) comes standard in new condos here in NYC and beyond. Perhaps the mid-level products such as air conditioners and thermostats will serve as bellwethers for this growing niche, where end users grow more accustomed to the incremental (and ideally seamless) embedding of technology into the very walls of their homes. Wink certainly hopes that this will be the case: Worthington noted that customer support is not only integrated into the app but that the hotline puts callers directly in touch with a human on the other end. For all the R&D that has gone into the products and ecosystem, service design remains paramount, and if Home Depot prefers a laissez-faire relationship, Wink anticipates a bit of hand-holding—partly in the interest of gathering feedback—at the outset.

After all, robots aren't necessarily better than humans for everything... but we have yet to figure out where they might best serve us.

Internet of Things Coming to a Home (Depot) Near You: Wink Smart Home App to Launch with First Collection on Monday, July 7