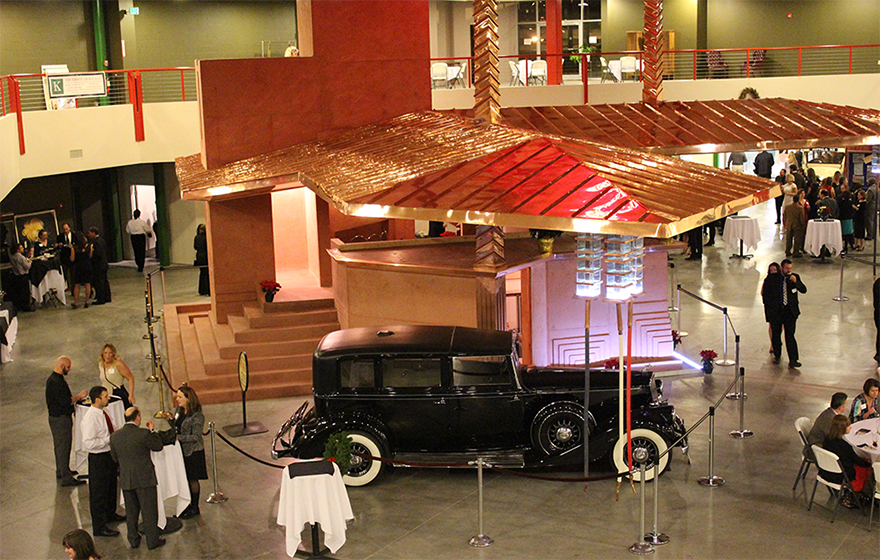 As a society, we've more or less got the design of gas stations figured out. Outside is a row of pumps (ground-mounted in most of the world but ceiling-mounted in space-tight countries like Japan), a roof to keep the elements off, a sprinkler system in case Gus decides to light up a Pall Mall. Inside there's snacks, cold drinks and a bathroom where you can cut and bleach your hair when you've been wrongly framed for murder and are on the run from the cops.

But in the early part of the 20th Century, gas stations were neither commonplace nor figured out in terms of design. There was no standard. The few folks that owned cars might be able to find a "filling station," or they drove to hardware stores to buy gasoline over-the-counter. So Frank Lloyd Wright's 1927 design for a filling station must've seemed very radical indeed. 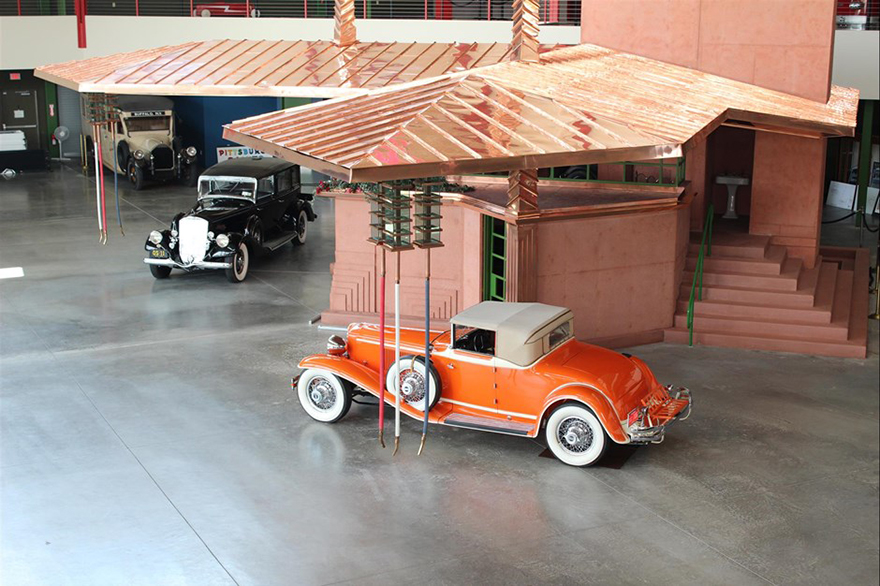 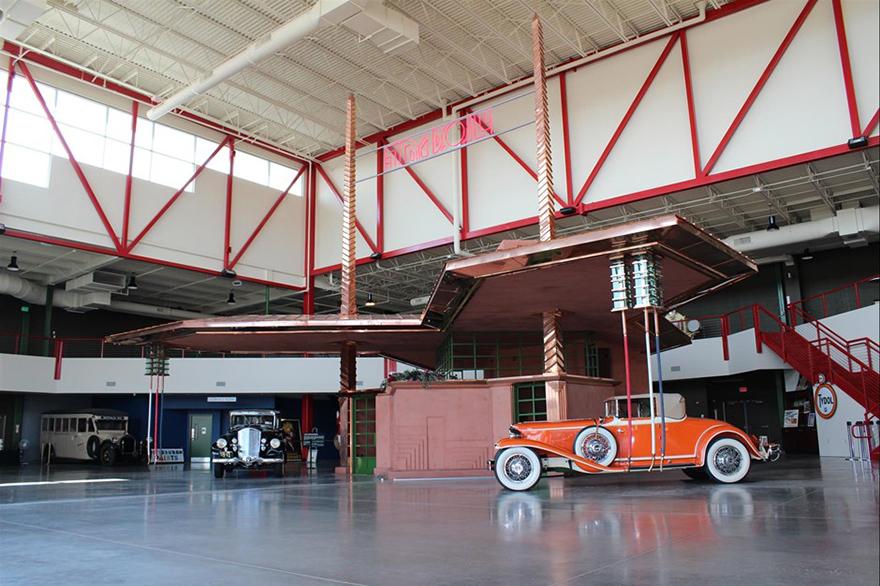 Wright's vision featured two cantilevered roof wings, each of which supported overhead gas pumps made from glass, for chrissakes, ringed with copper. And speaking of copper the entire roof was shod with it. (Impossible to imagine today given the cost of metal, but back then copper was so cheap that there was a huge statue entirely made out of the stuff in New York City, and we'd gotten the whole thing for free less than fifty years earlier.) Two towering "totems," as Wright called them, would have a sign conspicuously suspended between them. 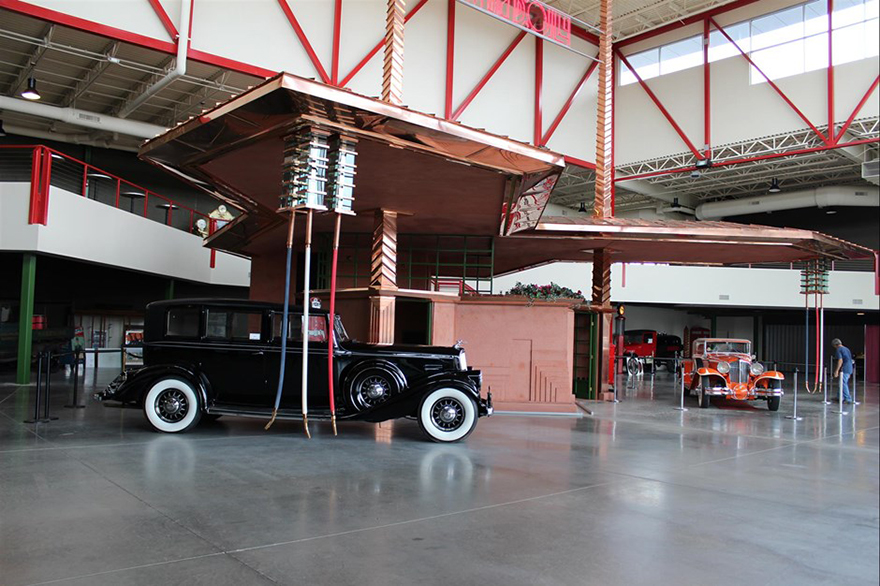 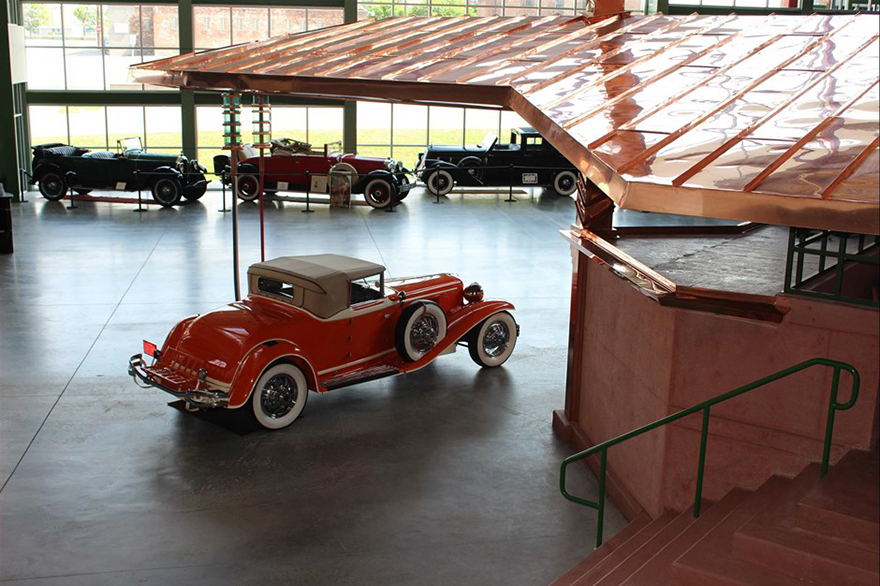 Wright's plan for the inside was a far cry from what we've got today. The station was intended to be sited in Buffalo, New York, a city known for its brutal winters. In that pre-OSHA era Wright designed the structure to include not one, but two fireplaces, one to keep the attendants warm, the other for customers, who could lounge in a second-story observation room while they waited to use the restroom.

In the end it was deemed too expensive to build, especially when coupled with Wright's asking price. The construction cost and the design fee were reportedly $1,700 each for a total of $3,400, which actually doesn't sound that bad; adjusted for inflation, that's about 46 grand and change. But the client, the now-defunct Tydol petroleum company, rejected Wright's plan and went with a cheaper design.

In the 1950s Wright did manage to see the construction of a highly modified version of his design in the R.W. Lindholm Service Station in Minnesota (photo below). He designed it in '56, it went up in '58, and amazingly, it is still in use today. The copper roof is in place, as is one of the two roof wings from the 1927 design, and the second-story observation room is in place. But the similarities to the original design end there. 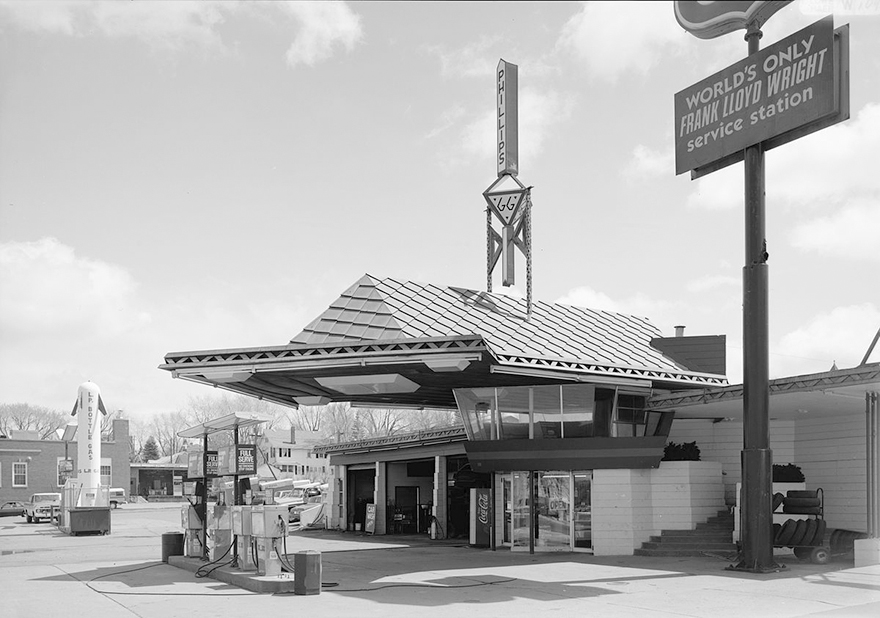 However, the Buffalo Transportation Pierce-Arrow Museum has, incredibly, built Wright's 1927 gas station design exactly as he planned it. That's what you see in all of the color photos in this entry. It took them nearly twelve years just to fundraise for it, and they prudently decided to erect it indoors, to avoid having the Buffalo winter destroy the $6-million-plus structure. Here's video from a local news channel detailing the project: