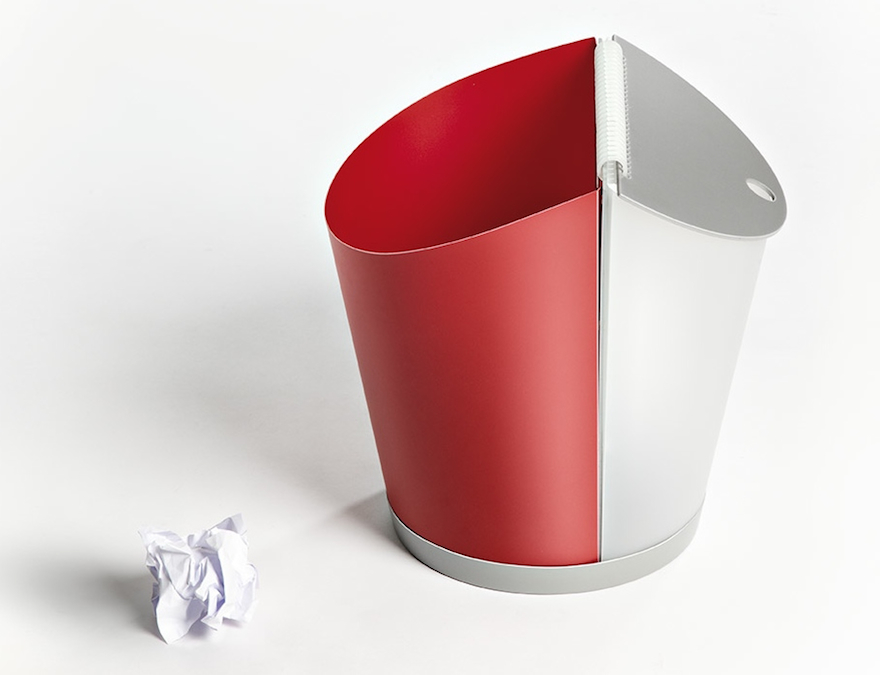 In my work as a professional organizer, I find that almost all of my clients are concerned about recycling, and I applaud them for this. But this means we need more than a single receptacle for trash. While multiple waste baskets or trash cans will work, designers have created some more elegant answers.

The Ginebra bin from Made Design, designed by Pascual Salvador, would work well for an end user whose municipality uses single-stream recycling and who just wants to separate recyclables from non-recyclables. The lid on the bin is an optional feature; sometimes lids help, other times they just get in the way. There's a metal base to collect any spilled liquids. 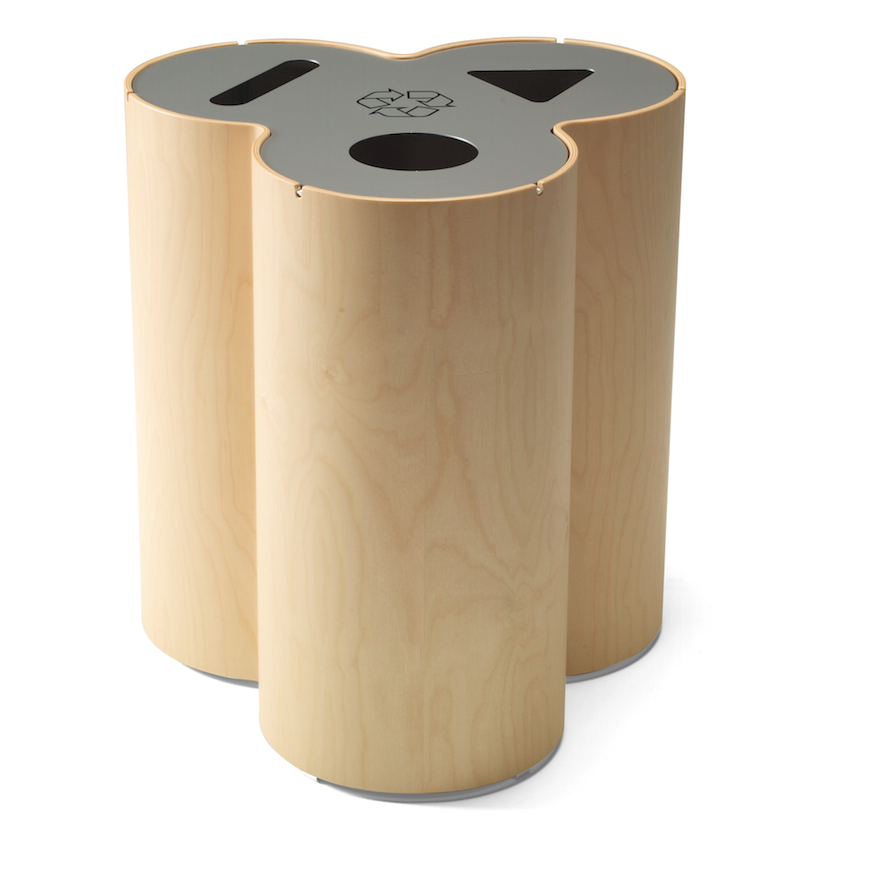 The Trio recycling bin from Materia has three sections: one for paper, one for cans and bottles, and one for trash. While the paper slot is obvious, and the circle cues designers (and many end-users) into the proper slot for bottles and cans, the triangle shape for trash is befuddling—and may undermine the bin's usefulness.

Each section of the Trio has its own liner, so each can be emptied independently of the others, as needed. The clover shape means this is not a bin that tucks away nicely in a corner; rather, it would be good for larger spaces where the end users want to call attention to the recycling. 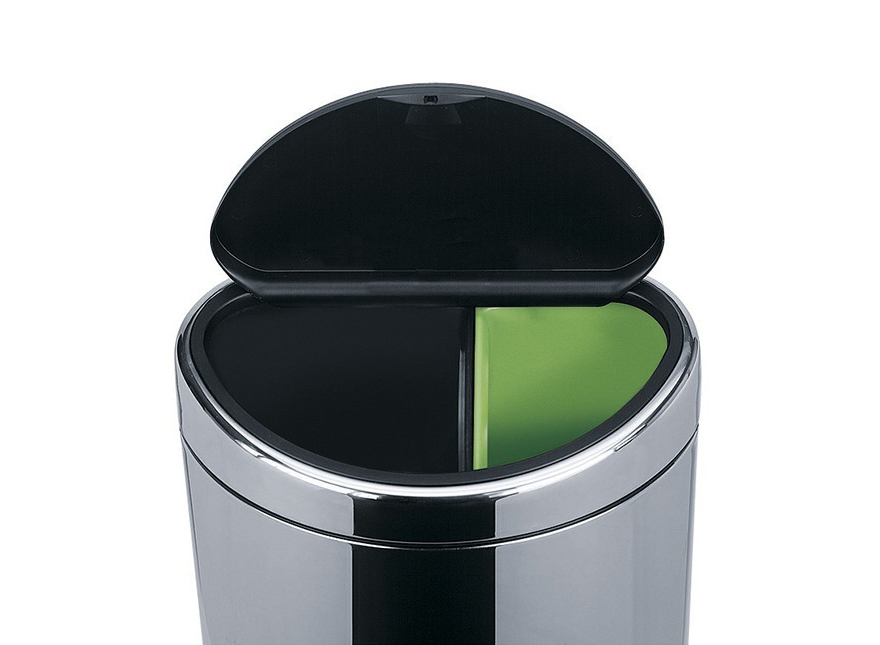 In the kitchen, end users may want to separate compostable material from other trash, and that's what the Bratatia twin bin is intended for. There's a larger bin for regular waste, and a smaller bin for compostables, with color coding to reinforce which bin is for each kind of waste. The bin is available in two sizes, since end users have different needs regarding space restrictions and the amount of trash they create. 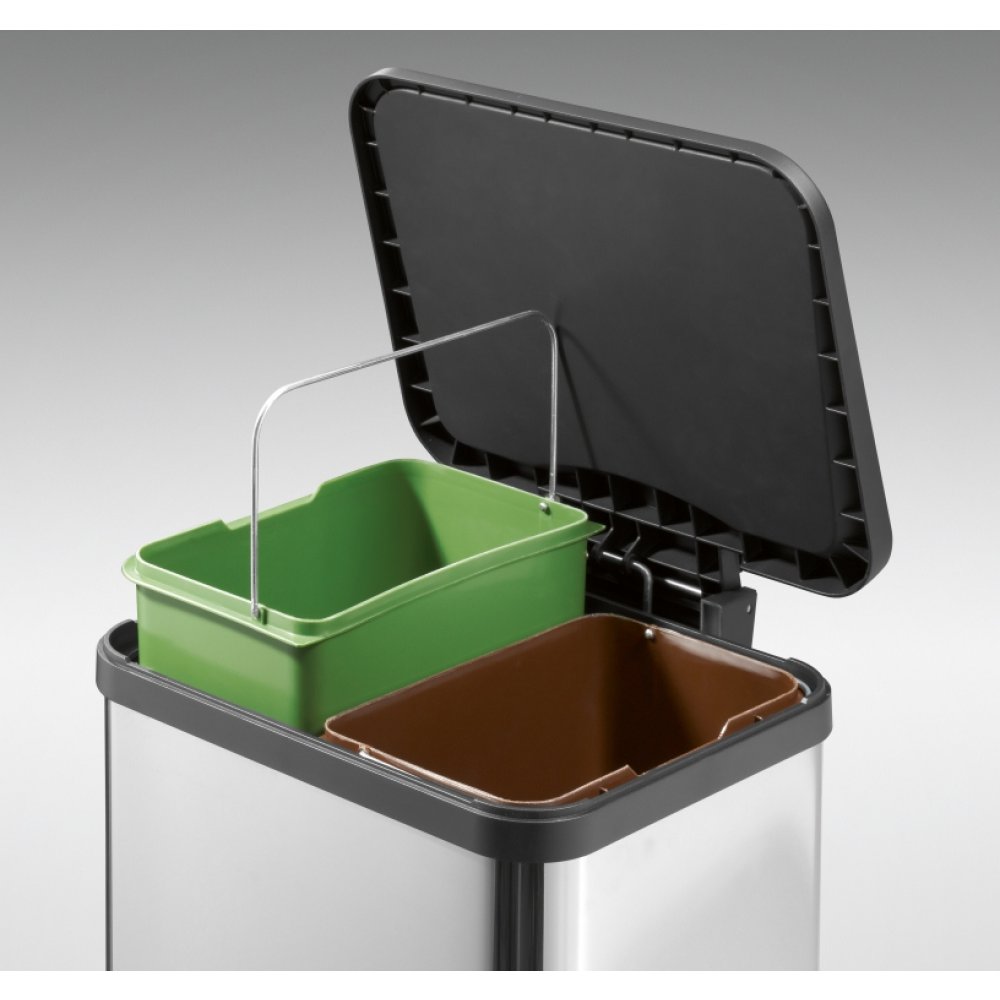 Hailo provides both two- and three-section recycling bins. Again, there's color-coding to distinguish the bins. The handle here is a nice feature; it allows bins to be easily emptied without the need for a liner. This is nice for end users who prefer to go as green as possible, and who can trust that the recycling bins will only get filled with totally empty bottles and cans. 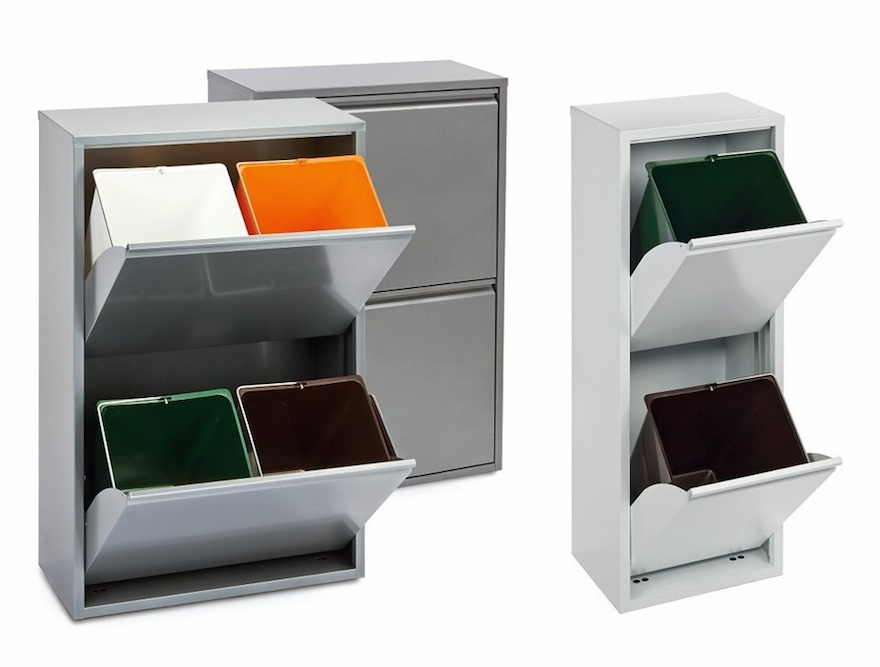 For end users with limited floor space, a vertical recycling solution may work well. This cabinet from Manufactum uses color-coding on the inside, but there's no indication on the outside as to which bin is on which level. 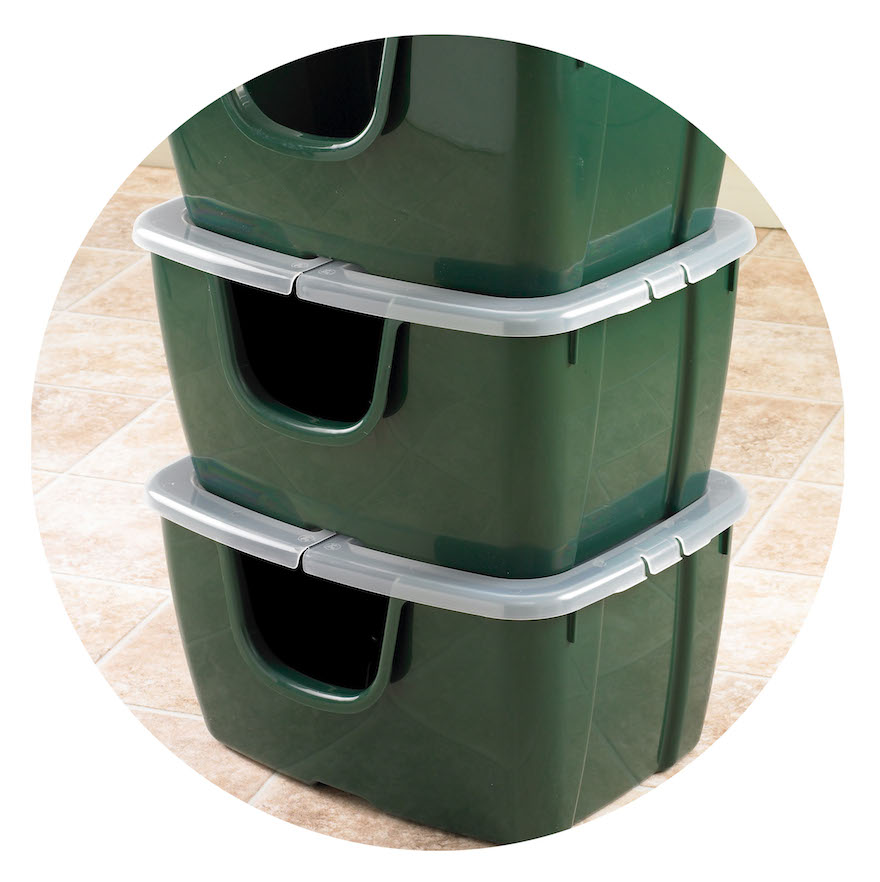 These stacked recycling boxes aren't as attractive as the Qualy Block stacking cans we've mentioned here before, but they're a simple solution for small spaces. (Each bin is only about 10 inches tall, so they won't hold a lot.) The lids fold in half if the side opening isn't large enough for some of the recyclables. The one drawback is that there's no indication of which bin holds which kind of trash. 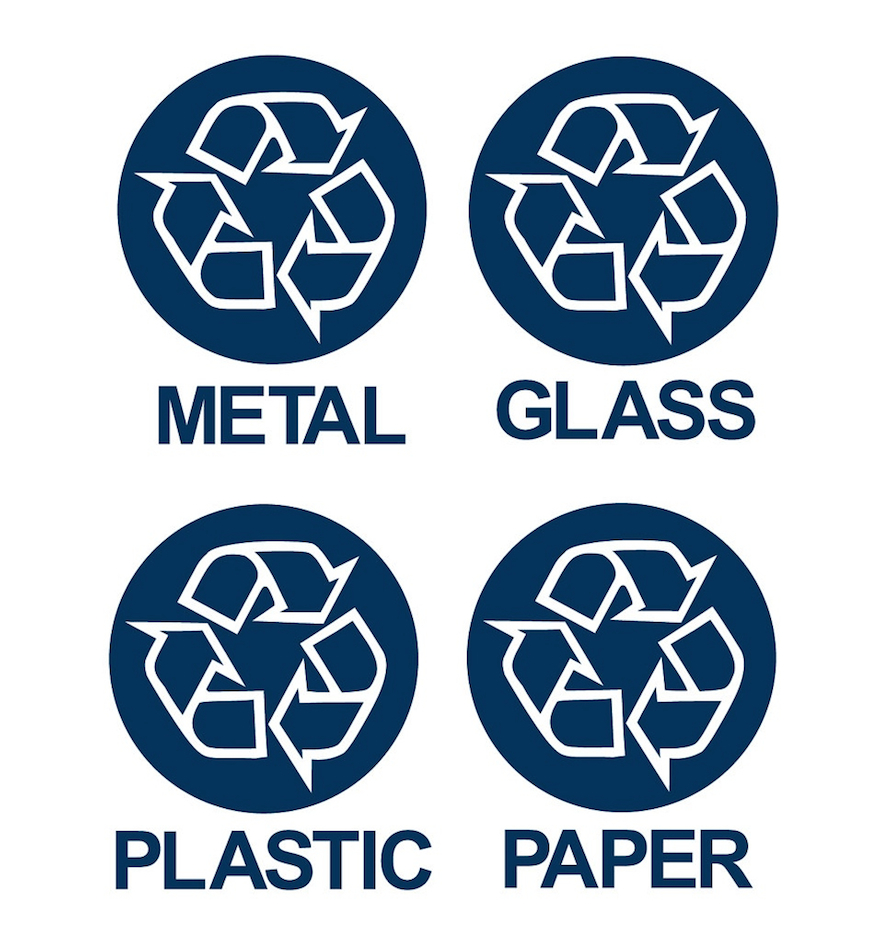 End users can address the lack of labeling on some recycling bins by adding their own labels.These vinyl labels come from Mad Hatter Graphics. 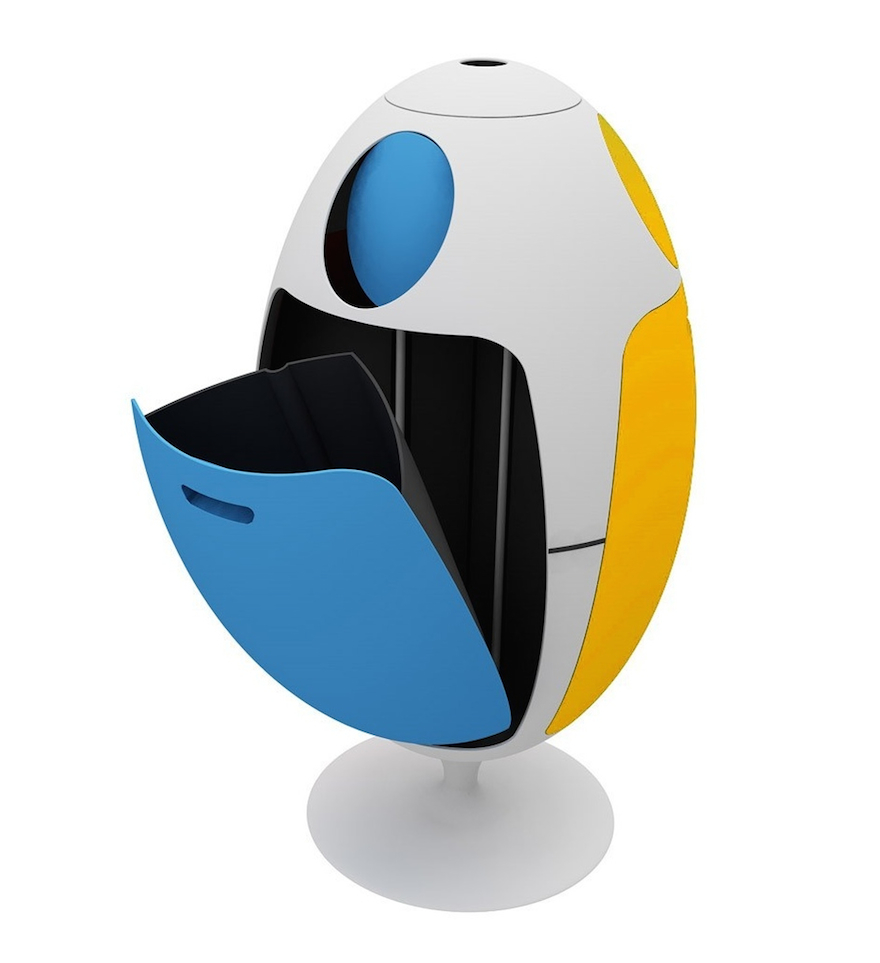 Designed by Gianluca Soldi, the Ovetto from Habitare Art Design is a novel three-bin recycling option. Items are inserted through the circular holes and drop into the bins below. There's also a a plastic bottle crusher on the top, to help save space. The Ovetto rotates, so it can be placed in a corner. It's made of recycled polypropylene, which seems appropriate for a recycling product.

One reviewer said the design helped get her children interested in recycling—a good reminder that children should be considered when designing home recycling stations. But another reviewer complained about numerous design issues: waste missing the liner bags, liners not staying in place, and difficulty in cleaning the interior. While this reviewer also noted that his autistic child loved the product, the attractive design didn't compensate for a product that didn't meet the reviewer's basic needs. Perhaps the reviewer was just misusing the Ovetto in some way—but then again, how hard should it be to use a recycling bin properly? 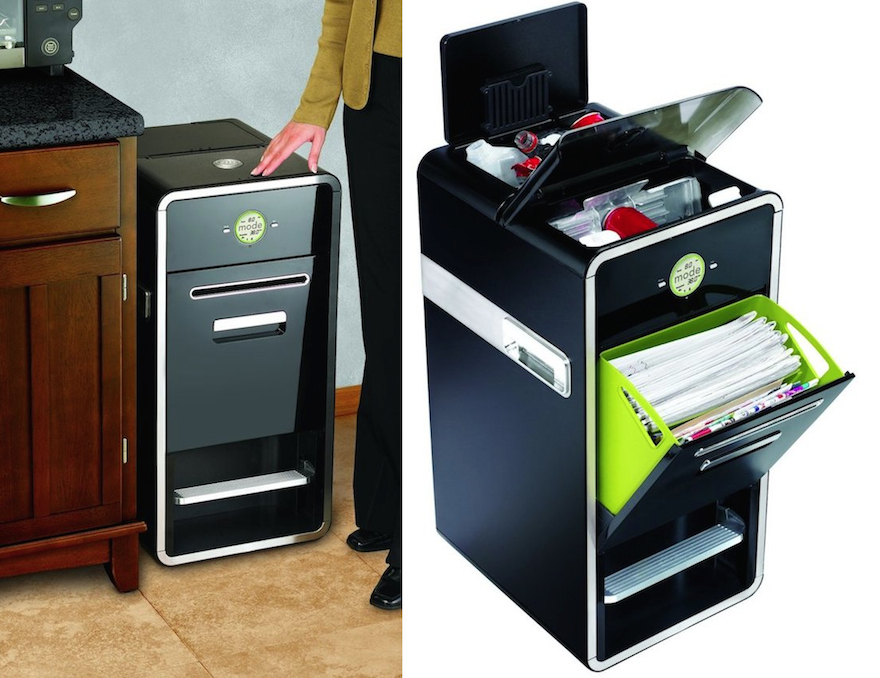 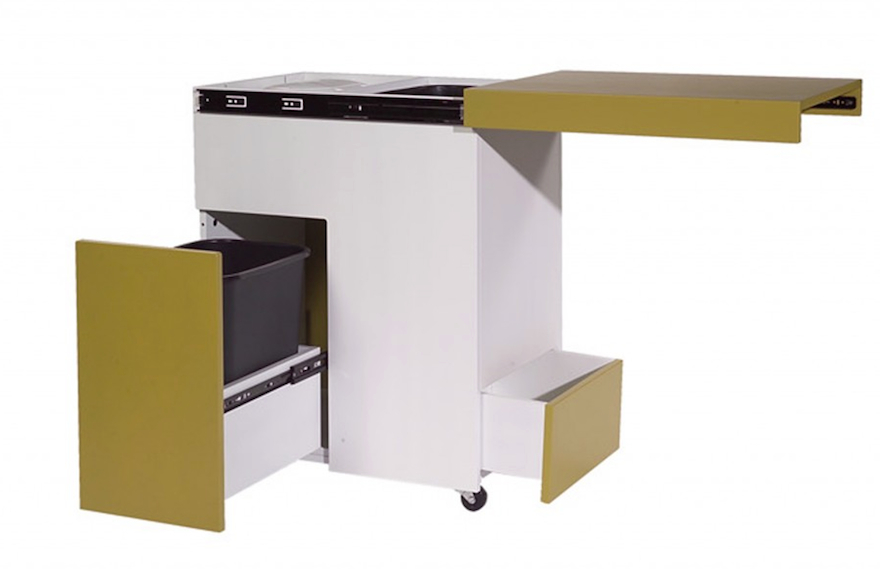 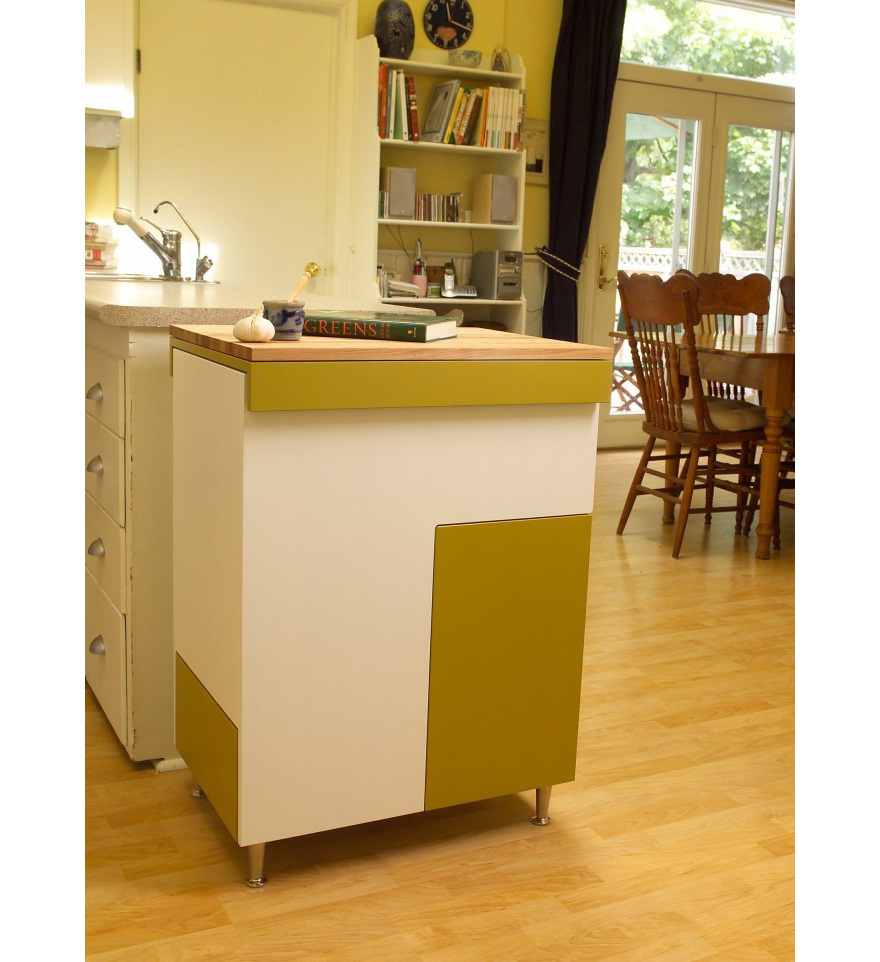 Trashy, from Metrik Studio, provides a recycling station built into a kitchen island. A recycling bin and compost bin are accessed by sliding the lid to the side; a garbage bin pulls out on the side. There's also a small drawer to hold new liner bags and/or used batteries. In consideration of different ways end user might use Trashy, it's available with either casters or legs, and with an optional butcher block top. Trashy would work for end-users who have the space, and want their recycling station to be as inconspicuous as possible. 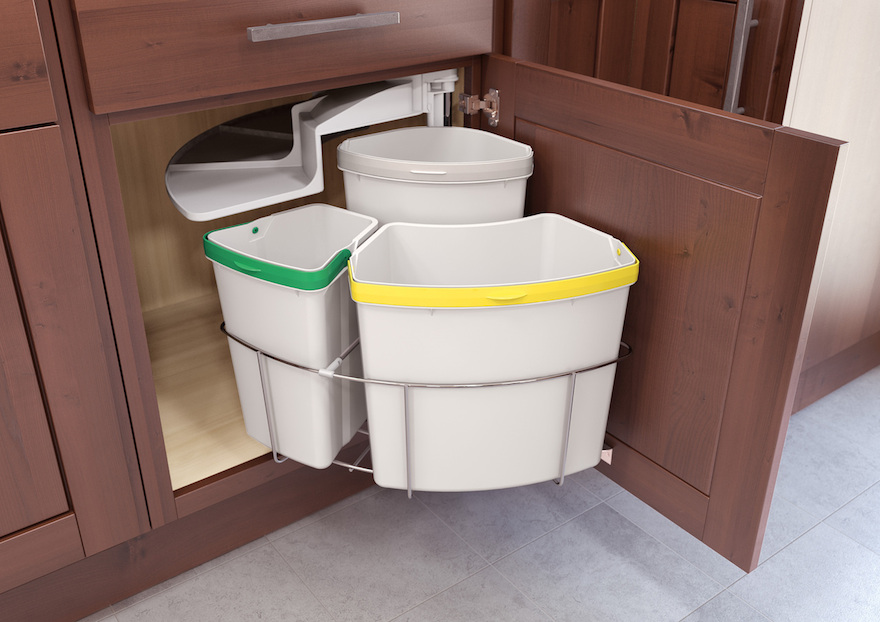 End users who don't have room for Trashy but who still prefer to have their recycling bins hidden away—for aesthetic reasons, or to keep them away from pets—may be interested in products like the Oko Recycling Center from Vauth-Sagel. 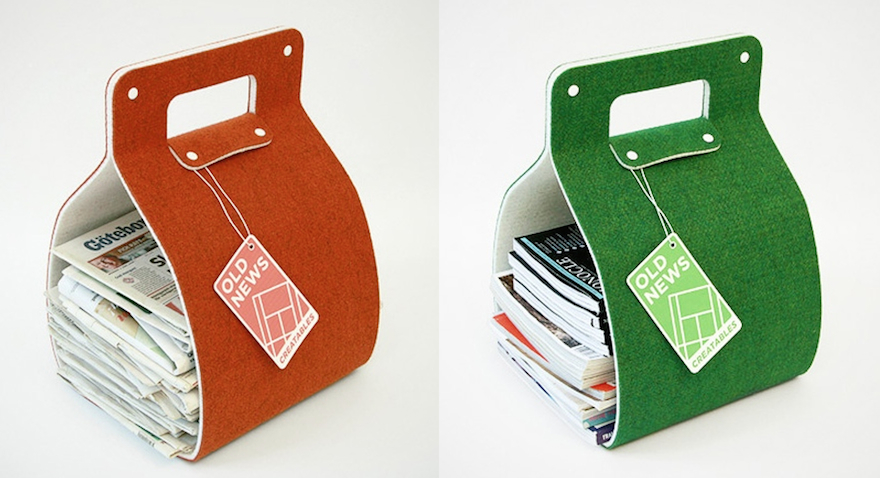 End users may well want to mix and match the products they use to collect recyclables; no one product will work in all rooms, and meet all needs. Old News from Creatables, developed in conjunction with designer Jonas Forsman, provides an easy way to collect and haul old newspapers and magazines. It's made from the excess felt from production of indoor tennis courts.