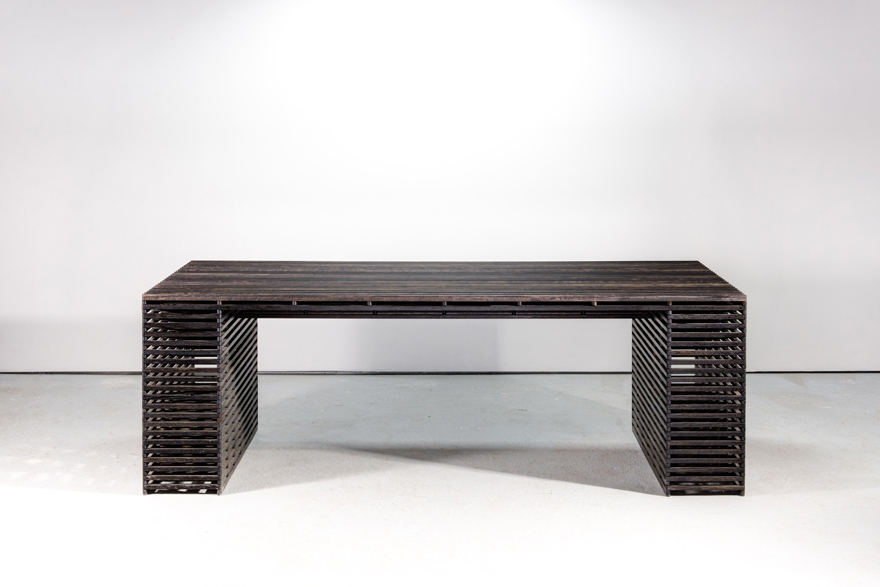 As the line between fine art and design becomes increasingly blurred, Ian Stell stands somewhere in the middle, crafting furniture that is just as much a feat of engineering as it is a work of art. I first stumbled upon the Brooklyn-based Stell when he presented a few pieces from his Pantograph Series at the Sight Unseen Offsite show during New York Design Week, and was so enraptured that I decided to dig a bit deeper in this column.

The Pantograph Series takes its name from the drawing tool, a mechanical copying device developed in 1603 for the scaling and copying of text and pictures. (Fun fact: Thomas Jefferson was known for making copies of his letters via a type of pantograph called the polygraph, which copied but didn't enlarge the original.) Stell became interested in the device last year while completing his MFA thesis in furniture from the Rhode Island School of Design. "I found something really fascinating about it, in that the core mechanism is a hinged parallelogram that can transmit motion in a very controlled way," Stell says. "The possibilities of how that can be used are limitless."

Stell was curious if the horizontal movement of the hinged parallelogram could also be transmitted vertically—specifically, down the leg of a table. Taking a leap of faith, he began to test his theory by prototyping, and soon found himself drilling a multitude of holes into bits of wood and hinging them together with pins. 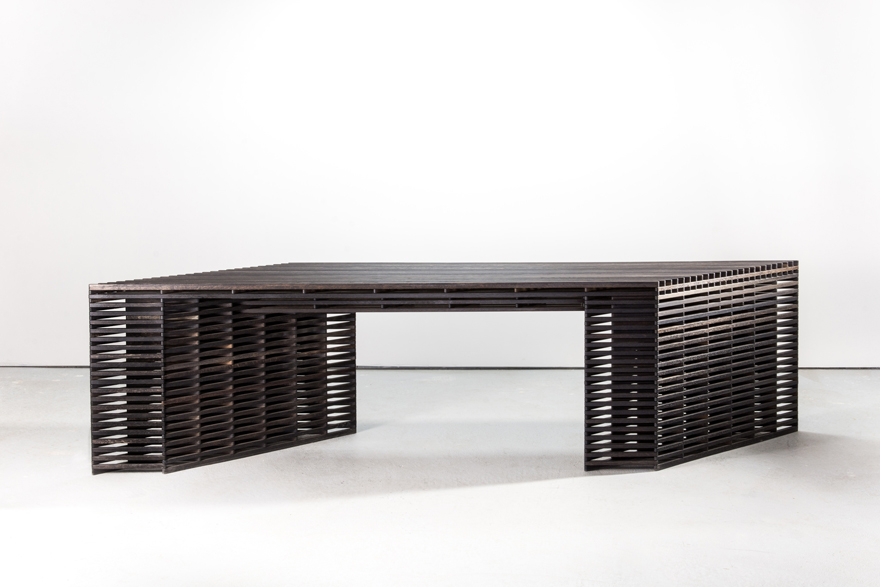 Stell's Big Pivot is one of three new tables that transform when pulled—in this case, from a desk or dining table (top image) to a console (above). 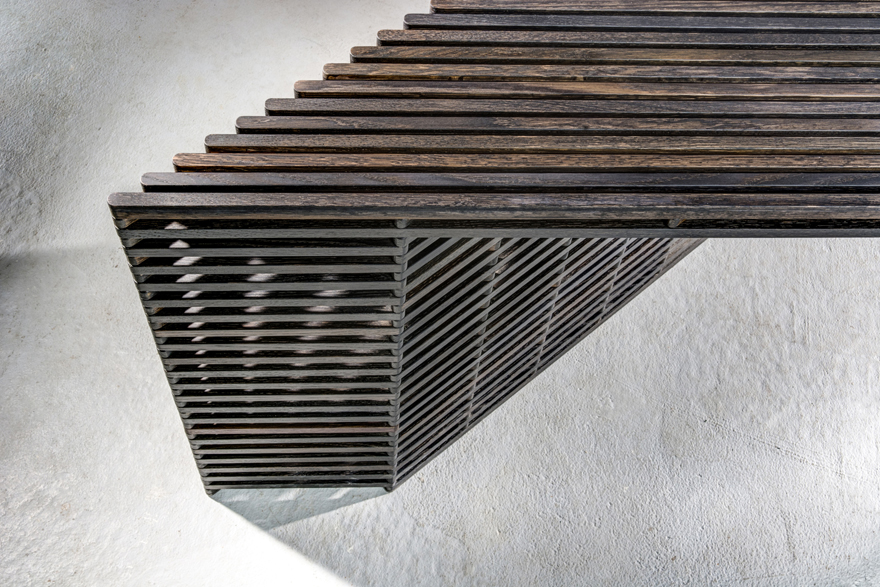 Big Pivot is made of more than 1,500 pieces of ebonized white oak.

"I realized very quickly that it all comes down to a certain level of tolerance when you're layering these pieces," Stell explains. "I had to get down to tolerances within 0.005 of an inch, which also relates to the material choice." Due to the forgiving nature of wood, Stell was able to work with a bigger tolerance than if he had used metal, which requires more accuracy (around 0.001 of an inch). Using trial and error, he played around with different relationships between the pivoting pin and the dimensions of the cross section of the wood. "There's a perfect sweet spot that lets the brass rod pivot," Stell says. "It allows there to be enough rigidity to be solid, but enough play so it can actually move."

Using a brass rod, rather than a steel one, proved decisive. "In my first round, I used brass as the pivoting rod, but when I scaled it up I switched to steel," he says. "I didn't realize how important it was using brass-to-wood versus steel-to-wood, which completely locked up and created way too much friction. Using the same exact proportions but switching the metal made all the difference."

These early discoveries paved the way for Sinan and Lattice, two modestly sized tables that mimicked the movement of the pantograph, transforming in size and shape when pulled from one side or the other. Stell built them using a computer to mock up the geometry before delicately hinging each piece to allow them to move in unison. Wanting to scale the system even bigger, Stell designed Big Pivot, his largest work in the Pantograph Series to date, a dining table at 18 inches wide and 113 inches long.

Sinan in its condensed form (above) and fully expanded (below)

"It was the first piece I made at that scale using this system, and the dynamics change completely," he says. "I ended up rebuilding that piece three times, changing the structure and geometry." In its original design, Big Pivot had four legs and six-layers of lattice for the table surface—but that turned out to be structurally unwieldy, so the designer had to rebuild it completely and make the sides solid, adding a truss structure to the center for support. In its final form, the table is comprised of over 1,500 pieces of ebonized white oak, pieces that shift in concert with each other to transform the surface area from that of a desk or dining table to that of a console. For the third build, Stell assembled the table in four days.

Oak is Stell's wood of choice for the transforming tables, which might come as a surprise given its irregular grain structure when cut into smaller units. "This actually turns out to be kind of amazing, because if you can accurately locate where the hole should be and the piece of the wood is milled correctly, the warp of the wood shouldn't matter," Stell explains. "It's like fabric. By the time you get to the fifth or sixth level, it's like a crazy woven straw rug—all the pieces flatten out and it's pretty damn accurate."

Another consideration was the movement of the wood itself, expanding and contracting based on the climate of its surrounding environment. As anyone who makes furniture knows, wooden joints need to tolerate the swell and contraction of wood with the seasons. With the lattice of the Pantograph Series, the horizontal plane accounts for this shift, allowing the pinned pieces to move in and out with the seasons.

Although Stell has established a system for building out these objects, don't expect them to be mass-produced any time soon. Big Pivot is the only one of its kind and it retails for $20,000 at Matter in New York. Stell sees the series more as an example of a methodology—a methodology he hopes to apply to creating custom, site-specific pieces for clients who appreciate complexity.

"There is a huge part of my work that is like choreography," he says. "It's about form that moves in a poetic way. The people who seem to respond to my work are people interested in that poetry as much as they are in fulfilling a specific design need in their home. There are probably simpler way to do that, but that's not what I'm interested in."