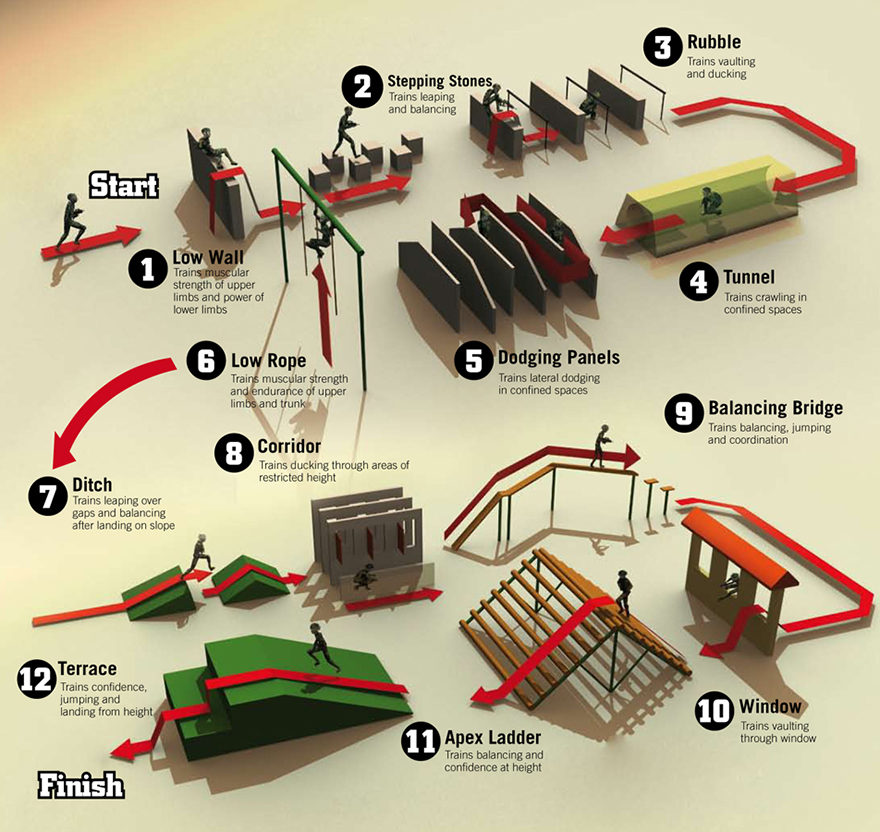 This week social media has been flooded with the following vid, featuring twentysomething athlete Kacy Catanzaro. On Monday night's episode of American Ninja Warrior, the gymnast from Jersey became the first woman in history to clear the obstacle course and qualify for the final round, performing seemingly impossible tasks: The 5’0”, 100-pound Catanzaro doesn't have the height and wingspan to easily reach from one obstacle to the next, so she compensated by swinging back and forth, then tossing herself through the air on sheer arm strength and momentum.

Training for a competition like ANW is an unusual affair. If you're training for a marathon you can hit a treadmill or the road, if you're prepping for a run on Jeopardy you can hit the books. But obstacle courses, particularly ones filled with the fiendishly unusual challenges first devised on Japan's ANW progenitor program Sasuke, aren't exactly on every corner. And even Parkour experts can find themselves stymied on the ANW obstacles, which shift, rotate, tilt and sway it ways that static objects like mailboxes and bannisters do not.

So how do you get the obstacle course experience to train for a show like this? Here are six ways:1) DIY #1: Reverse Engineer & Build One way is to do what former ANW competitor David Campbell did, which is to reverse-engineer and build an entire full-sized replica of the obstacles on your relative's property, recruiting help from former competitors of the show. 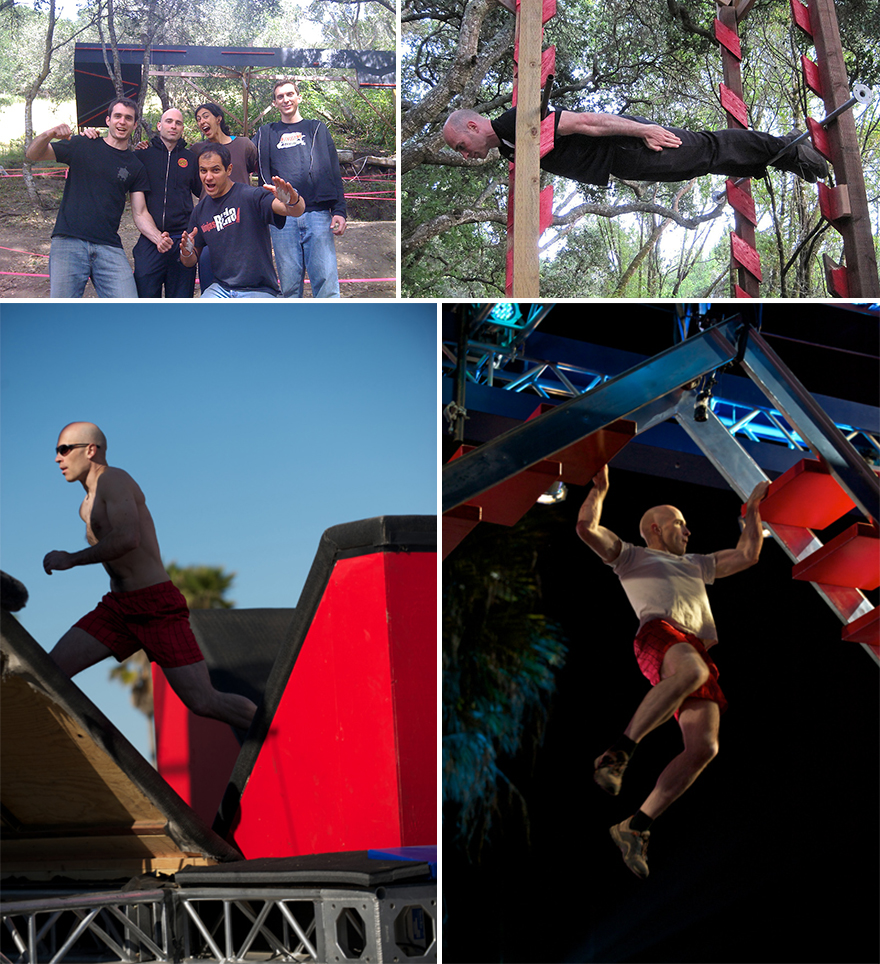 In designing the plans, Campbell went so far as to take measurements on a visit to the Japanese set. The list and descriptions of the twenty obstacles he constructed is documented here, and Campbell went over the build in an interview with Men's Fitness.

And Campbell's not alone in this. California Engineering student Adam Markowitz also built his own backyard course in preparation for applying to compete on the show. 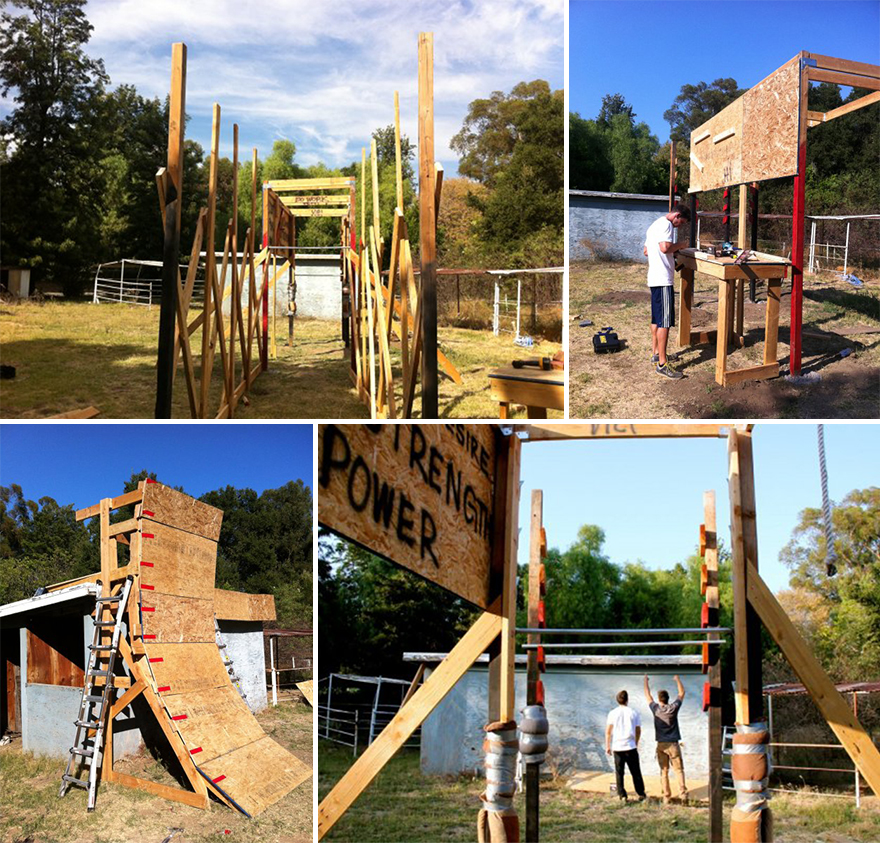 Ready to build, but don't want to reverse engineer? A company called Upstream Designs is billing themselves as "the leading company in the United States providing professional custom designs for Ninja Warrior inspired parks and obstacles" (and between you and me, it would be nice if they hired a leading web design company to work out their website). They sell plans on how to "Build a Ninja Warrior Obstacle Course," offering schematics in both "Commercial" and "Backyard" varieties, but it is not clear whether the company is actually affiliated with the show. 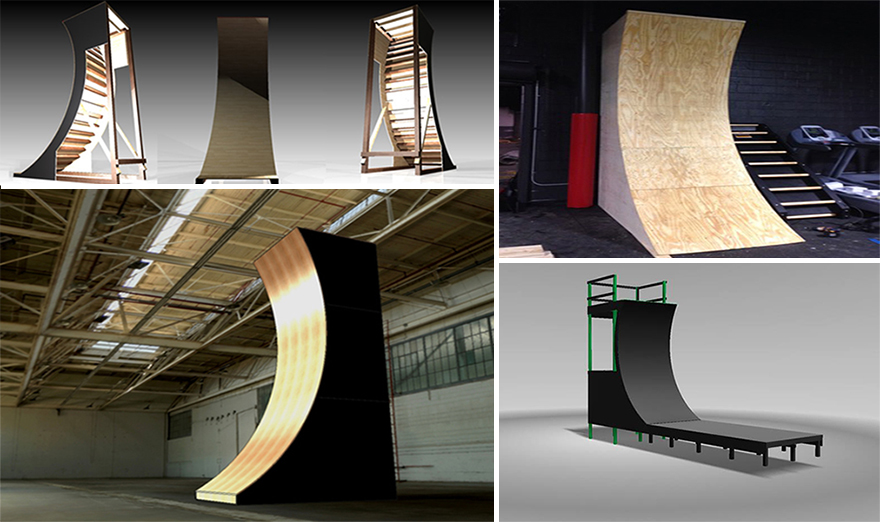 In 2012 [Tough Mudder] partnered with IDEO to construct a robust and scalable approach to obstacle innovation based on principles of rapid prototyping and human-centered design. Tough Mudder has since created a robust market-leading obstacle innovation process under the direction of the company's Chief Creative Officer, including an offsite Obstacle Innovation Lab for rapidly prototyping and refining new obstacle concepts prior to final rollout.

The best part of the collaboration? "Tough Mudder's CEO and cofounder Will Dean insisted that IDEO designers complete a Tough Mudder challenge before starting project work." Probably a bit more physically demanding than sanding the edges off of a blue foam model.

Catanzaro, a former Division I collegiate gymnast, relocated from New Jersey to Texas specifically to train at the Alpha Warrior obstacle course located in San Antonio. 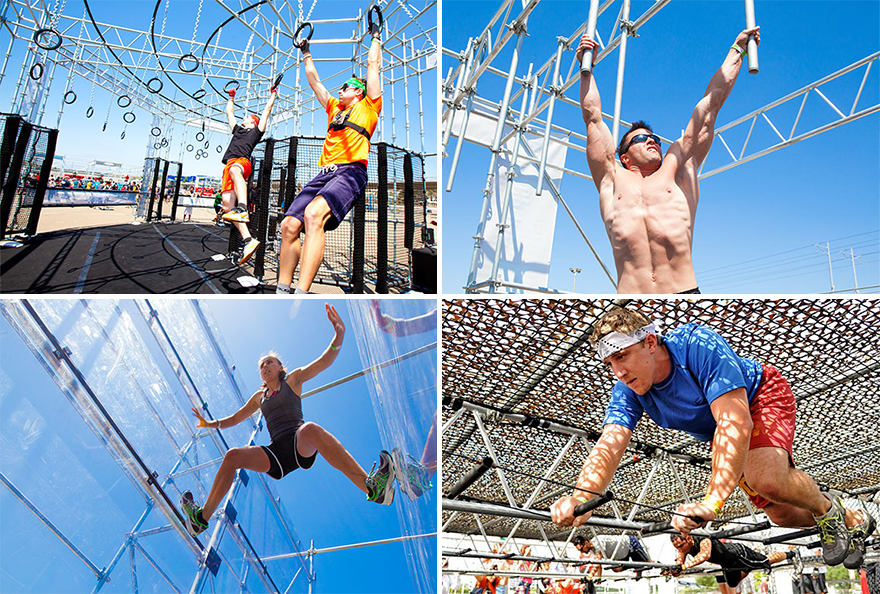 Billed as "125 tons of steel, 5,500 man hours to build, 500,000 custom welds," the Alpha Warrior facility is part of a small obstacle course cottage industry that's popped up around the country. Partyworks Interactive in L.A., for instance, has this four-stage obstacle course available for event rental, like if you want to vet your interns or really ruin a first date.

The Partyworks course is specifically military-inspired. Which brings us to our next method:

You don't have to be a citizen of a country with a traditionally aggressive military to gain access to some impressive obstacle courses. The Singapore Armed Forces, for instance, recently redesigned their Standard Obstacle Course to address current trends in urban warfare. 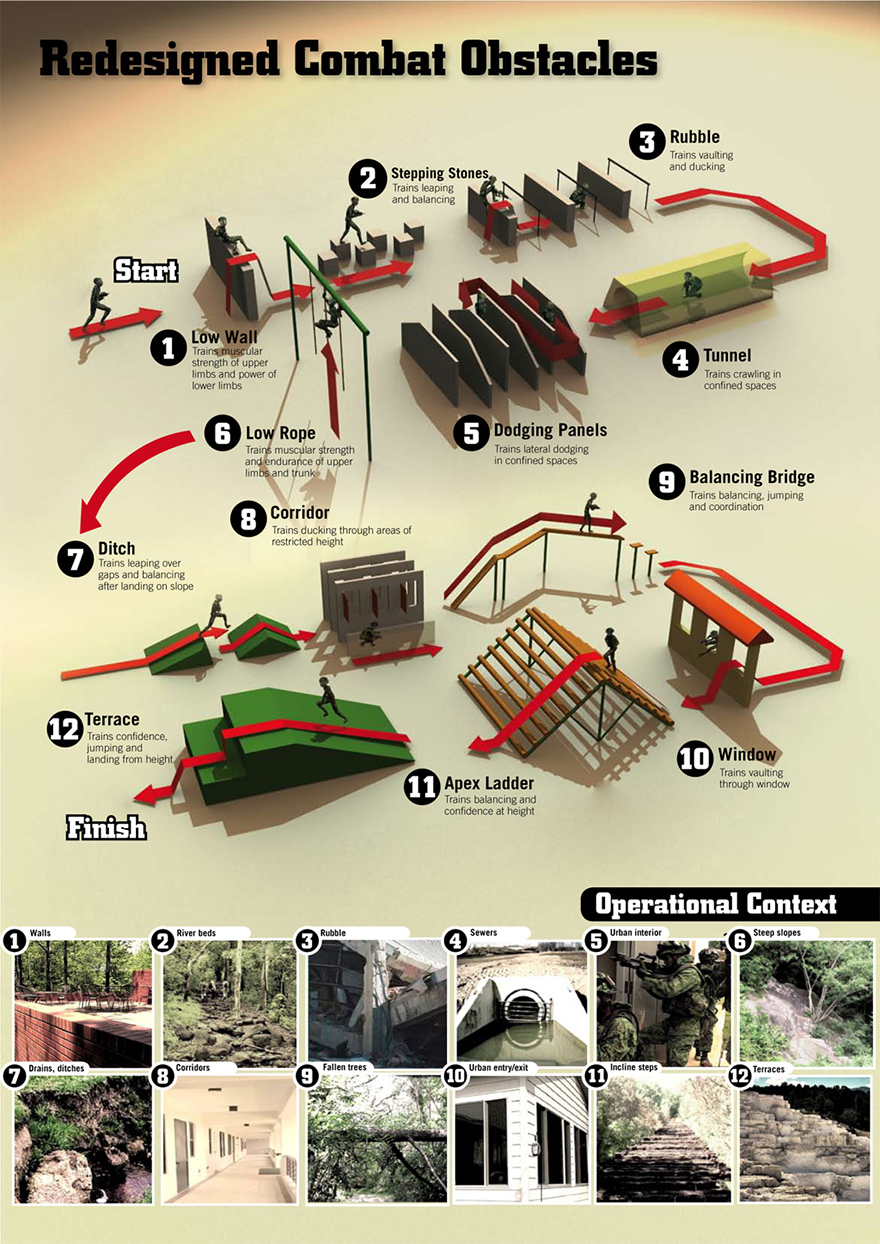 Best of all, it's free! I mean, I think you have to sign up for like four years of service or something, but at least you're not going out-of-pocket.

6) Buy One from Hammacher Schlemmer.

If you're DIY-challenged and too much of a wuss to spend a measly half-decade serving your country, but have got US $12,500 lying around, you can scoop up this inflatable 85-foot "military" obstacle course from Hammacher Schlemmer. 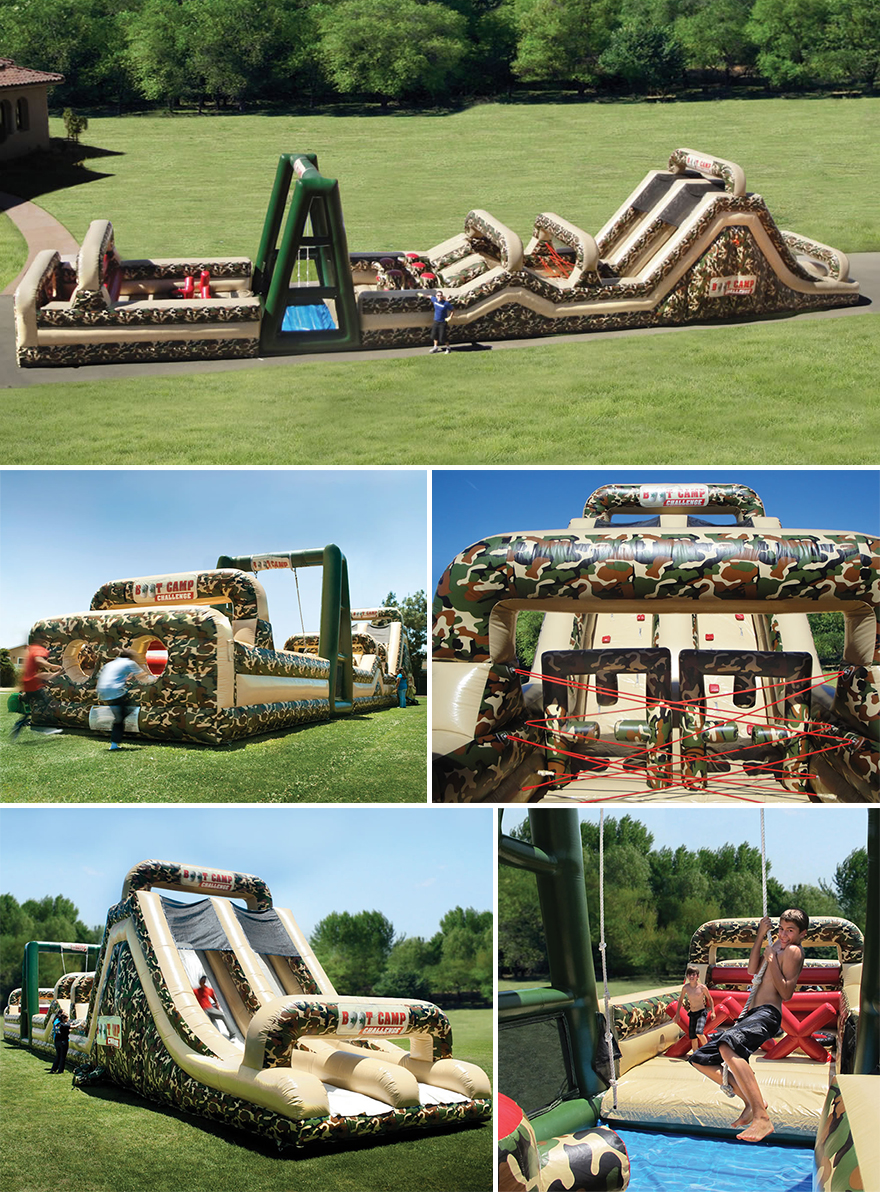 ...The course begins with two portholes that must be jumped through—successful clearance positions runners in front of three horizontal hurdles that can be overcome from above or below. Three "hedgehog" obstacles slow momentum if poorly navigated, increasing the difficulty of clearing the ensuing obstacle—a 16'-high rope swing. Two knotted ropes enable two runners up to 250 lbs. to swing over an 6'-long x 12"-deep pit, which is sealed to accept water, plastic balls, or foam blocks (not included). Knocking aside three stanchions gains entry into a matrix of elastic bands that simulate a laser field. Runners complete the final challenge by climbing a hill and sliding the remaining 20' to victory and ultimate exhaustion.

I have this fantasy where we finally locate Al-Qaeda's main camp, and it's just filled with a bunch of these things.