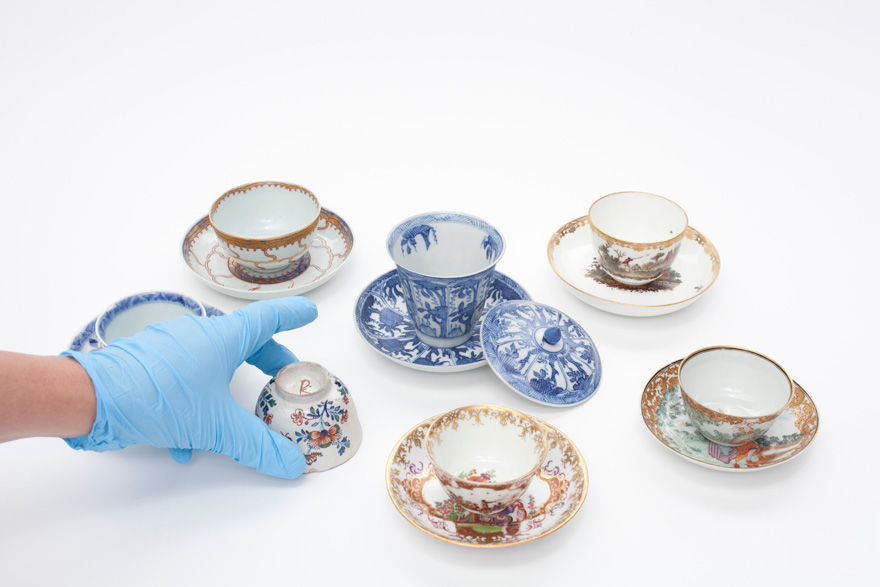 Walking through a vast museum filled with paintings and sculptures, you might be surprised learn that what you're seeing is, on average, only 2–4 percent of the museum's entire collection. The other 96–98 percent is tucked away in climate-controlled storage rooms deep beneath the museum or at off-site locations. Recently, the Dutch art historian and designer Maaike Roozenburg unveiled the first results of a project intended to give these hidden objects a new life, putting them in museumgoers' hands and helping people get back in touch with their heritage.

Roozenburg has spent years exploring museum archives, and about four years ago she started examining the possibilities of 3D scanning technology as a way to put out-of-reach museum objects back in the hands of everyday people. "These objects are meant to be used, not just exist in a museum," she explains. "I want to bring their existence, their soul, back. That's where my work as a designer comes in. I really wanted to make these objects accessible."

A 17th-century teacup and saucer (left) and its 3D replica 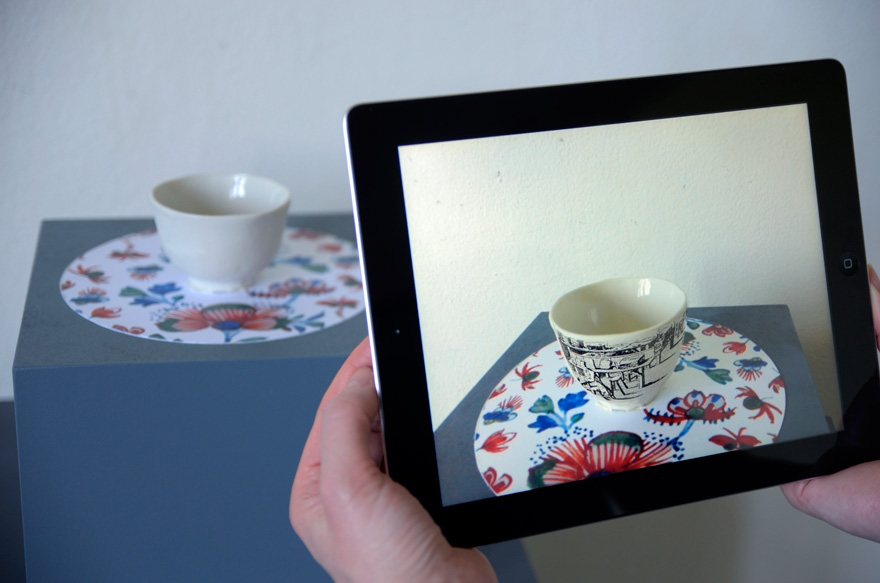 The final porcelain replicas are enriched with an Augmented Reality overlay that can be viewed on a smartphone or tablet.

During one of her research trips to the Museum Boijmans Van Beuningen, in Rotterdam, Roozenburg fell in love with a set of 17th-century glasses. "I just wanted to have them," she says. "They looked very modern somehow and I wanted to use them in my home." Unfortunately, the glasses were among the most fragile objects in the museum's collection, and not allowed to be touched.So instead Roozenburg explored the possibility of scanning and reproducing these glasses and a set of teacups, spending the next six months running between the Delft University of Technology and the museum to find a solution that might work. Suggested options required adhesives or sprays to mount the glasses on a rotating bed and to minimize reflected light—ideas that were immediately rejected by the museum. "It took me half a year to prove to the museum that I wouldn't damage anything and that everything would come out just fine," Roozenburg says. "It was the first time that I took out insurance on my design studio because I thought, If I mess up now, I'm really fucked." 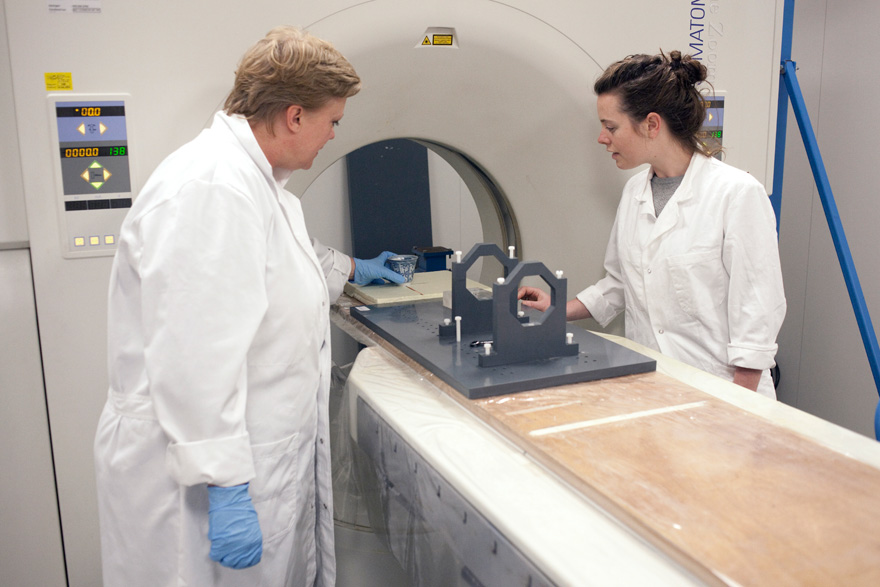 Putting a teacup through a medical CT scanner. Roozenburg was not allowed to handle the objects herself; a museum staffer positioned them for her. 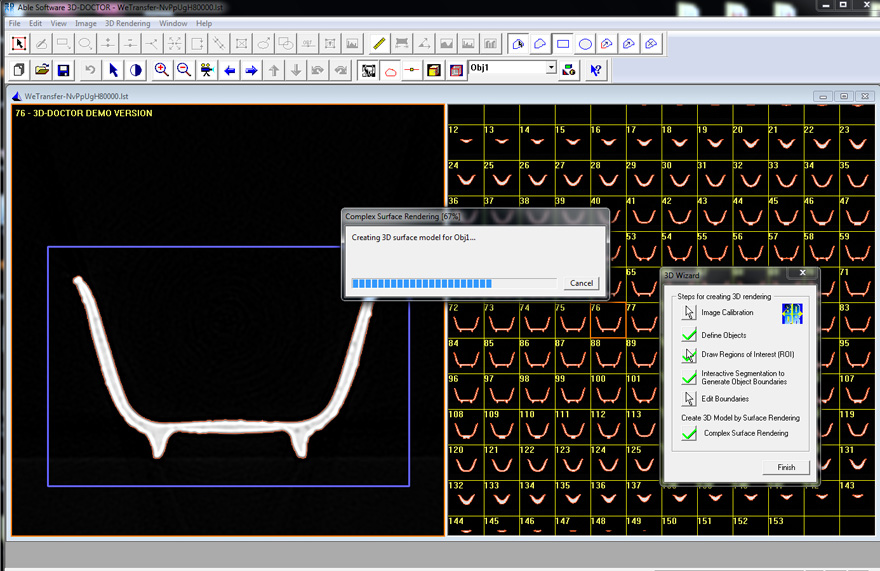 Reconstructing a teacup from the CT scan data

The Museum Boijmans Van Beuningen eventually agreed to non-contact scanning via a medical CT scanner. With the delicate porcelain teacups placed on the patient table, the CT scanner's radiation source and detectors rotate around the sample and measure the attenuation of the x-rays from different angles. This method captures the information in slices at a pixel resolution of around 0.2 millimeters, a result sufficient enough to detect the sample's thickness and geometry.

To capture the maximum amount of detail, Roozenburg places the objects in such away that the slices don't obscure any detail. "All the cracks, all the damages that are in the object—I wanted to have them all in there," she says. For the fragile glasses, the designer was not even allowed to touch the objects; she had to be accompanied by a museum staffer in gloves who would position the pieces for her.

The project's biggest challenge, however, was translating the resulting scanned data to a printable format. "The printing was kind of complicated, and I didn't expect that," Roozenburg says. "I thought, Well, you have data and you just print—but apparently, transferring the data from one document to the other is pretty complicated." As CT scanners typically aren't used for 3D printing, the files they generate end up being more of a cloud of dots, multiple slices of an object that don't result in a solid object. 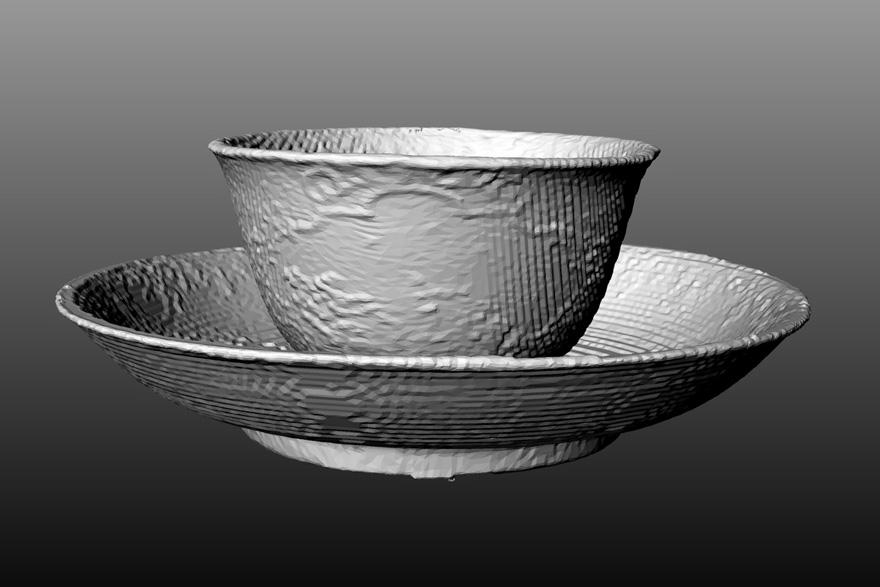 The computer model for one teacup 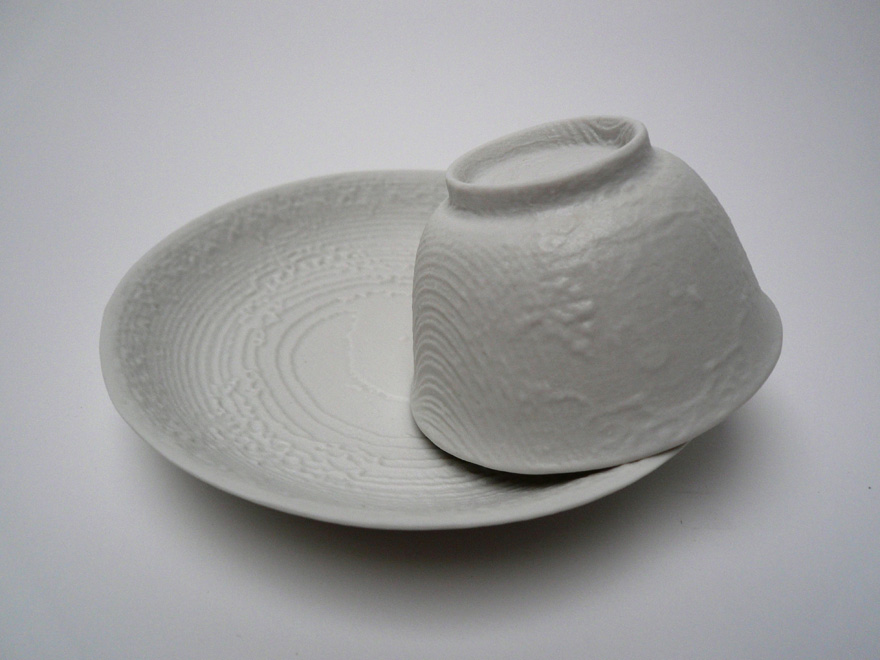 A team of students from the Delft University of Technology helped convert the files to a valid, printable 3D CAD model by converting the collection of 2D slices into a 3D mesh. This file was then printed in maximum resolution on an Object Eden to an accuracy of 16 micron. Additionally, an Augmented Reality (AR) tag was embossed on the surface of the tea cups to be used later as an optical marker. Plaster molds were made from the prints of the teacups, which were used to create porcelain casts of the objects.

The final results are not just copies—they are enriched by AR technology to display additional information. Working with Wim van Eck of the AR Lab at the Royal Academy of Art, The Hague, Roozenburg developed a proof of concept for an AR overlay that creates a 3D animation on top of the physical object, showing virtual golden decorations from the originally scanned object along with other information about the object's origin. Students in the graphic design department, guided by Gert Dumbar, made the first sketches of the augmented layer. They were integrated thanks to help from the creative agency LikeFriends, which combined them with information from historical sources such as 17th-century sea maps, paintings, engravings and models.

These AR layers can be viewed through Junaio, a smartphone application that supports location-based augmentation and image recognition. By holding up a smartphone to the replicas, the user can view layers of detail not on the object and discover more about its past. The porcelain slip-cast tea set was exhibited in the Museum Boijmans Van Beuningen last summer, and museumgoers were encouraged to handle and interact with the objects, using their own smartphones as a guide. 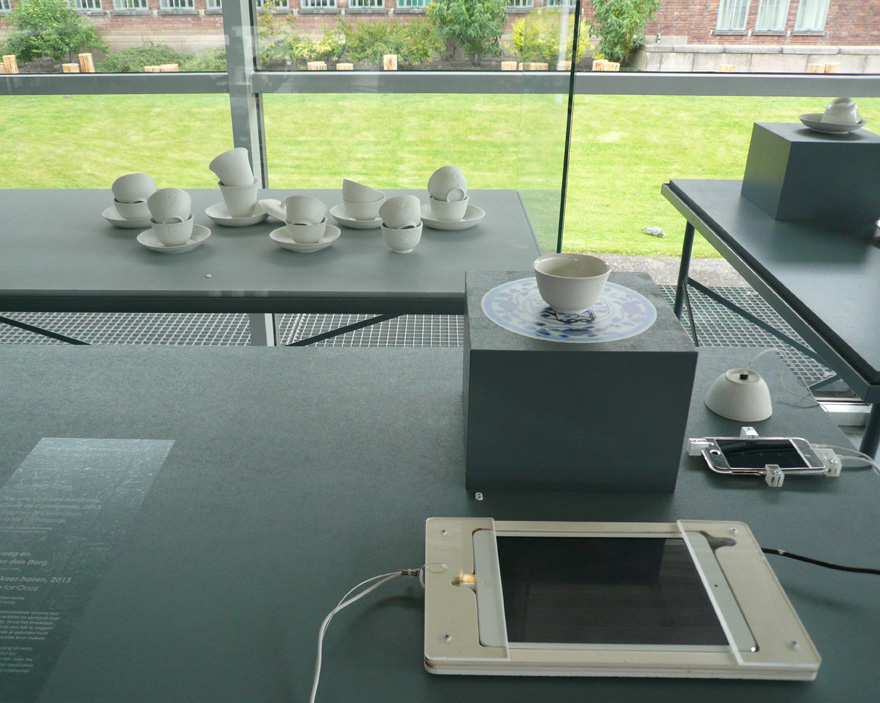 Putting the replicas on display at the Museum Boijmans Van Beuningen, in Rotterdam

Roozenburg continues to push the explorations further by testing new techniques for replication as they come out, and creating alliances with other museums to give their collections new lives beyond the museum walls. She is currently in talks with a group of international museums about creating a collection of replicas that tell a story. She plans to create other types of tableware and eventually tackle furniture. As a historian, however, she does question the impact this type of work will have on how people value these objects.

"In the future, reproducing stuff is going to be so easy," Roozenburg says. "Of course, it will not be the real thing, but I think it is interesting to think that if things can be reproduced so easily, what will happen with the real thing? What does this change in our perception and appreciation of the real object?" As she takes this project further, Roozenburg will be investigating the endless possibilities of the replica, asking how 3D prototyping techniques can be merged with "traditional" or "historical" techniques or how digitalized content can be connected elegantly and meaningful to these replicas.