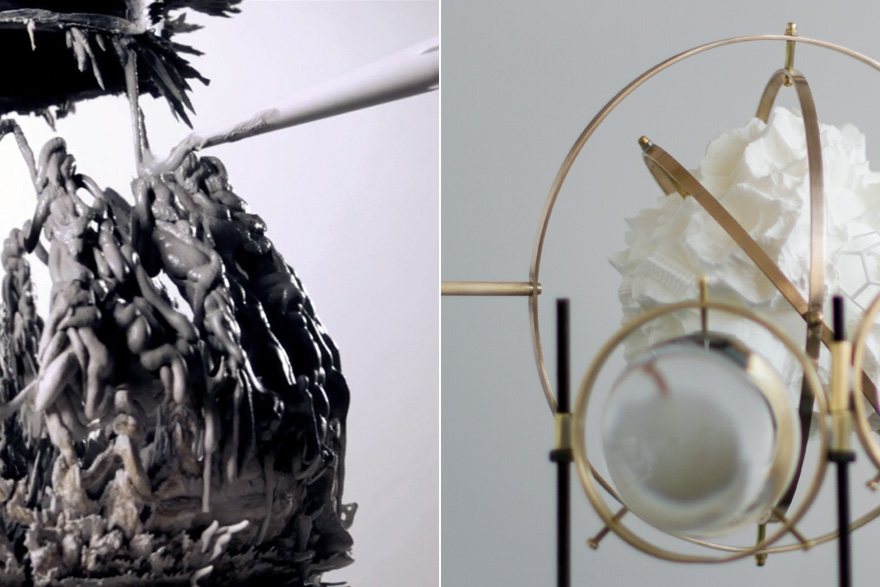 Like many designspotters, we first took note of Jólan Van der Wiel at the Transnatural exhibition in Milan in 2012, one of two exhibitions that included his "Gravity Stools" (we saw him in Ventura Lambrate as well). He's been busy since then, transposing his magnetic modus operandi to couture—with fellow Amsterdammer/futurist Iris van Herpen, of course— and now, with a project called "Architecture Meets Magnetism," into ceramics.

By developing a formula for clay slip with iron fillings, the Gerrit Rietveld Academy grad (and now teacher) arrived at a material that he calls 'dragonstone.' Wired's Liz Stinson likens them to Tim Burton machinations, but I'm seeing some Giger-worthy gnarliness in the extruded stalagmite carapaces. The designer, for his part, was inpsired by Gaudí: In Dezeen, van der Wiel expresses admiration for the Spanish architect's use of "gravity to calculate the final shape of [La Sagrada Familia]." "I thought, 'What if he had to power the turn off the gravitational field for a while?' Then he could have made the building straight up."

The project is part of ongoing research into the applications of magnetic forces, which Van der Wiel conducted at the European Ceramic Workcentre in Den Bosch.

After discovering that clay could be shaped by magnetism, he is now exploring applications for the technique in architecture.

"The idea of creating buildings with magnetic field has always fascinated me," said Van der Wiel. "I'm drawn to the idea that the force would make the final design of the building—architects would only have to think about the rough shape and a natural force would do the rest."

"This would create a totally different architectural field," he added. "These are the very first models showing how future buildings and objects could look when they are shaped by natural forces." 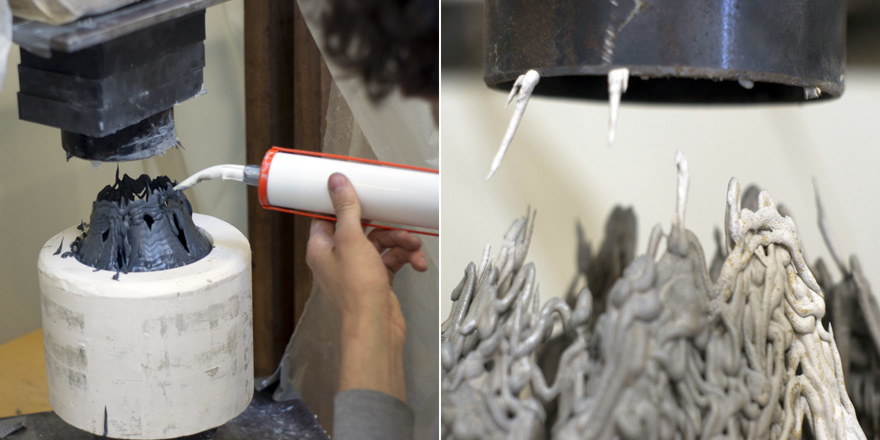 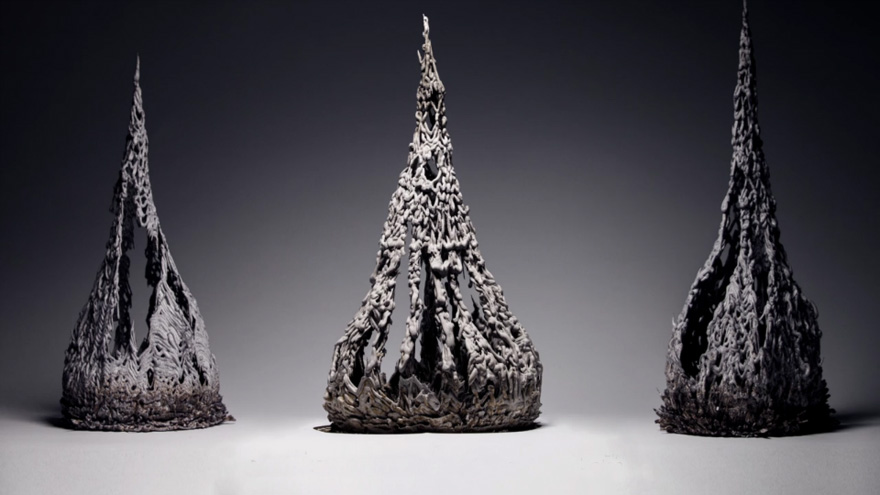 Just imagine if Van der Wiel got his hands on one of these badboys.

For more on Van der Wiel, check out Coolhunting's recent studio visit; in other magnetism news, some think that our fickle planet may be on the verge of a geomagnetic reversal of polarity, two millenia ahead of schedule. Per Wikipedia (via Kottke): "The latest one, the Brunhes-Matuyama reversal, occurred 780,000 years ago. A brief complete reversal, known as the Laschamp event, occurred only 41,000 years ago during the last glacial period. That reversal lasted only about 440 years with the actual change of polarity lasting around 250 years. During this change the strength of the magnetic field dropped to 5% of its present strength." What a weird and wacky world we live in.

Practical applications notwithstanding, a pair of students in the Digital Media Design department at Berlin University of Arts have developed at a new format for 3D-printed art. By setting a cantaloupe-sized digitally fabricated sculpture on an old-school projector, Michael Burk and Ann-Katrin Krenz are able to generate a virtual triptych of quasi-cosmological imagery. "Mixing digital aesthetics—parametric and generative shapes—with the qualities of analog projection creates an otherworldly look that seems to be neither digital nor analog."

The formal aesthetics of the first prototypes evoked associations with the model of the solar system in "Mysterium Cosmographicum" by Johannes Kepler, who thought to have found the geometrical basis of the universe in the platonic bodies. Picking up the mysticism created by Kepler, who also saw the platonic bodies as representations of the elements (fire, water, earth, air), the projected world embodies an abstract story. 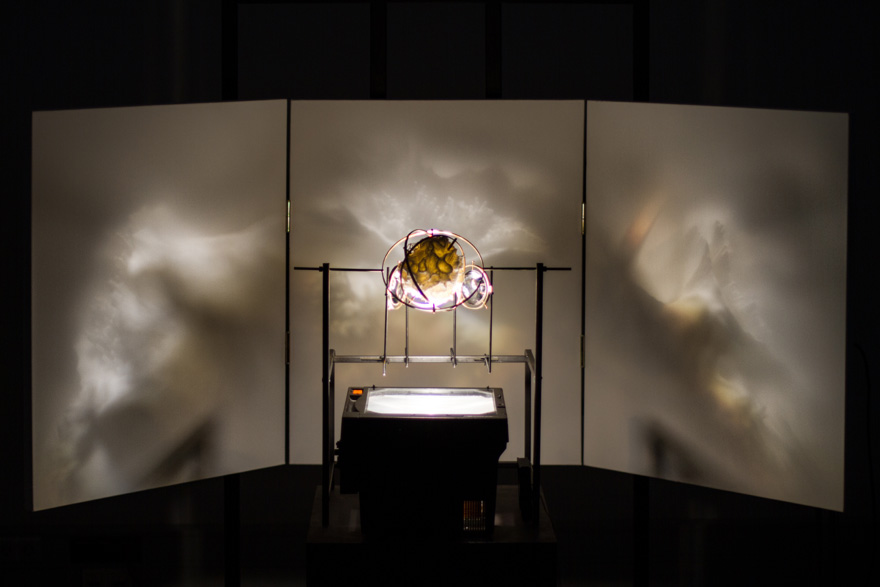 The fantastic landscapes also evoke everything from the Little Prince's asteroid abode to Plato's allegory of the cave, pointing to the hybrid medium's potential as an embodiment of narrative. In any case, it's gorgeous—more images are available on Flickr. 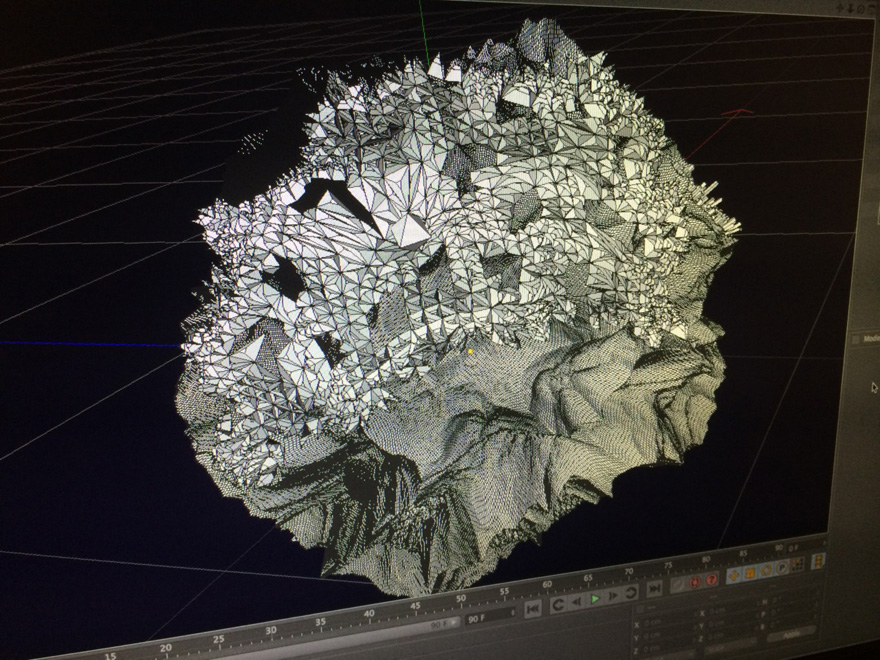 The sculpture is modeled in Cinema 4D