Started From the Stratosphere Now We're Here: Bonsai in Space 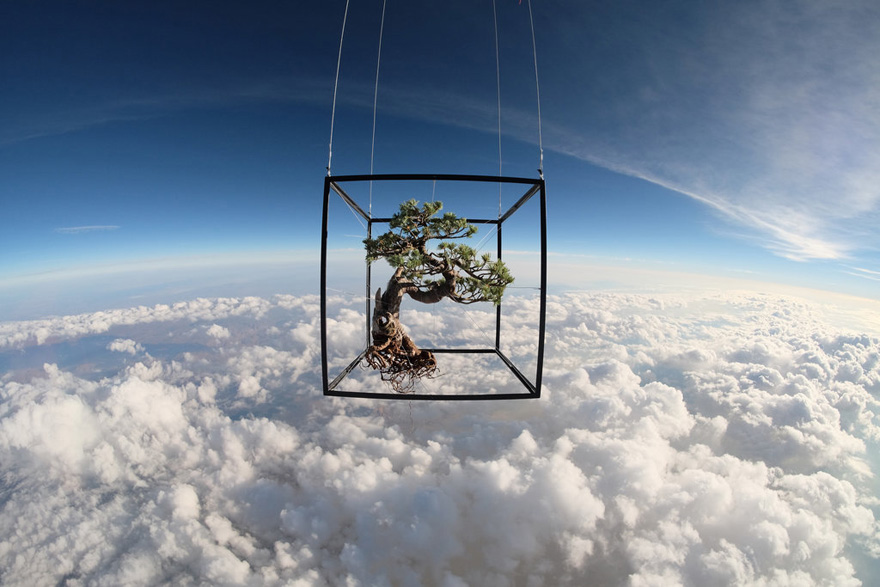 Gratingly early on the morning of July 15, artist Azuma Makoto meticulously prepared a lush floral display that would soon hurtle to pieces from around 90,000 feet above earth with Baumgartner-esque aplomb. The huge unnamed bouquet and "Shiki 1," a gnarled White Pine bonsai, departed earth from Black Rock Desert—of Burning Man fame—outside of Gerlach, NV. Much like that other Black Rock spectacle of poetic excess, these plants were part of a creative urge to push the bounds of living systems into an inhospitable zone. This is the EXOBIOTANICA project, the Red Bull-esque dream of Makoto, a Japanese artist who specializes in floral installations and reasonably spooky interpretations of bonsai traditional floral arrangement. 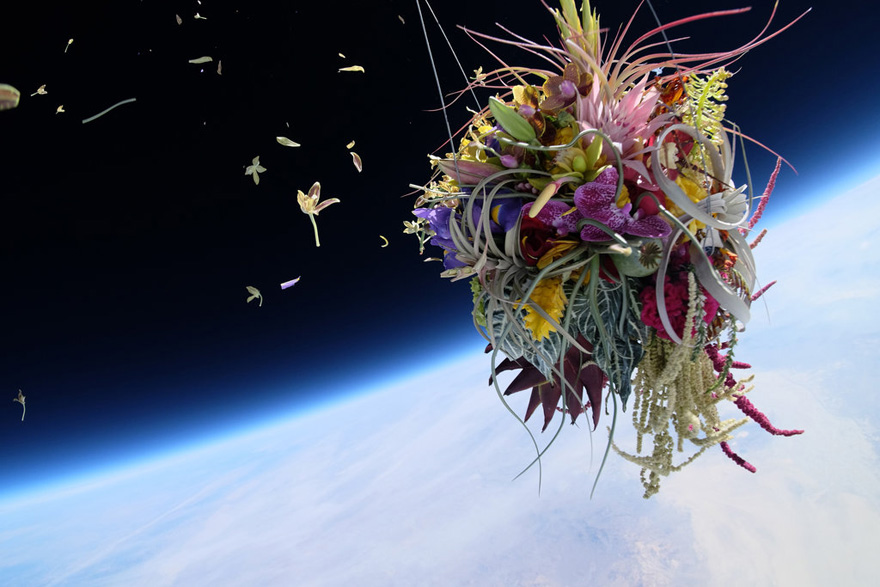 Aided by JP Aerospace, a volunteer-run organization that builds and shoots things into orbit, and Makoto's 10-person team, Exobiotanica succeeded in lifting these delicate plants into the stratosphere. They used massive helium balloons and high-tech styrofoam-and-metal-frame carriers, with plastic parachutes that deployed once the balloons lost pressure and fell to a thicker atmosphere. The contraptions, named Away 100 and Away 101, were recorded from the ground and accompanied by "six Go Pro video cameras tied in a ball." Which was probably a little more involved than it sounds. 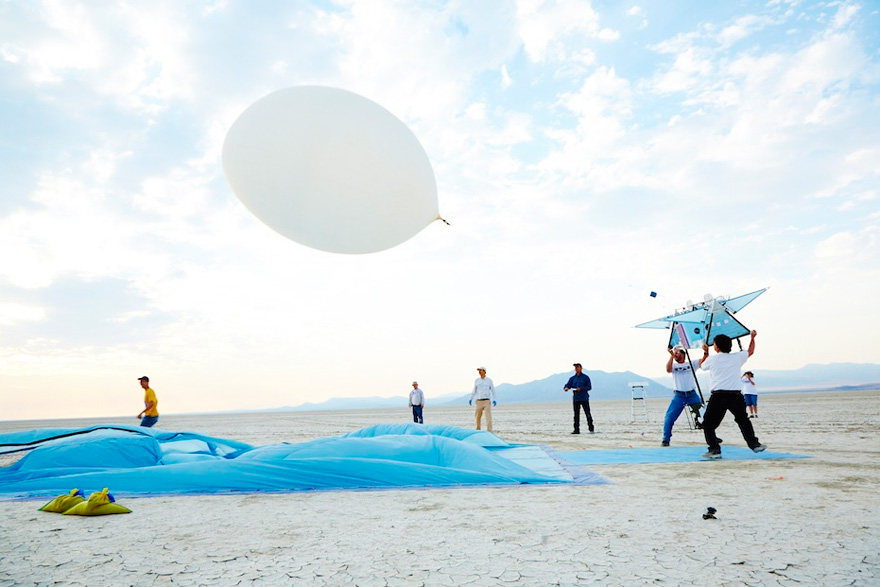 After rising for over an hour to reach 87,000 and 91,800 feet respectively, the balloons burst, and the meticulously arranged plants began their fall. The cameras and carriers were retrieved within a few miles of the launch site, and the photos are breathtaking. The flowers and bonsai were never found again.

The project asks: "Roots, soil and gravity—by giving up the links to life, what kind of "beauty" shall be born?" I think the photos speak for themselves, but additionally, as JP Aeronautics founder John Powell noted, "The best thing about this project is that space is so foreign to most of us, so seeing a familiar object like a bouquet of flowers flying above Earth domesticates space, and the idea of traveling into it." 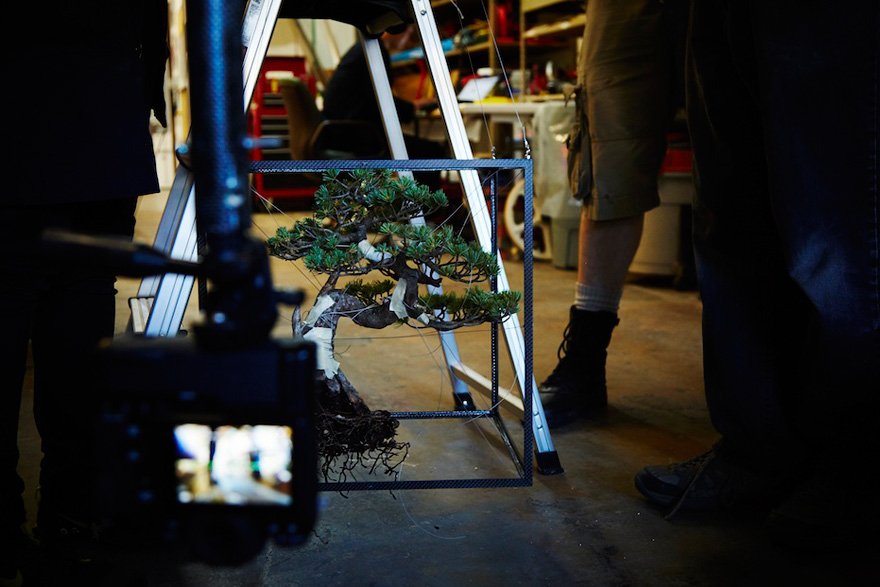 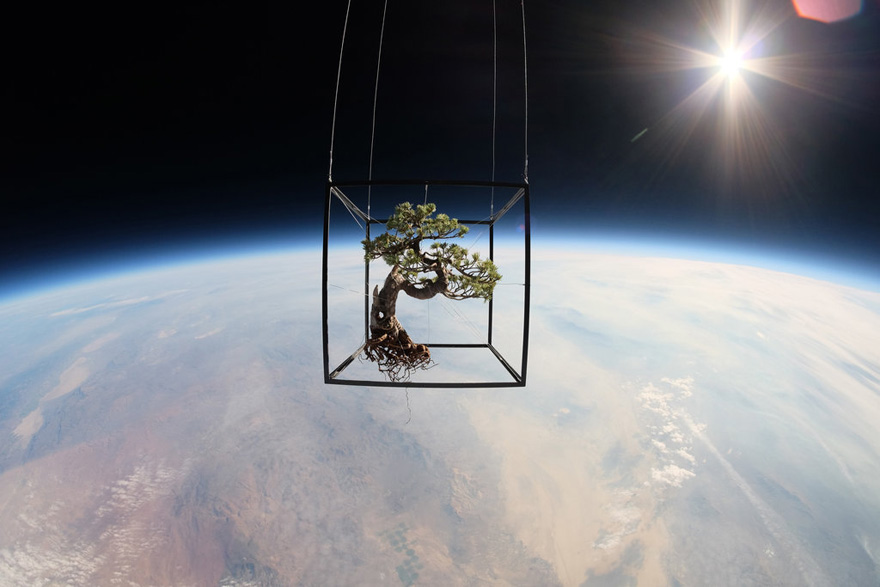