Designing for Drivers: Organizing the Car 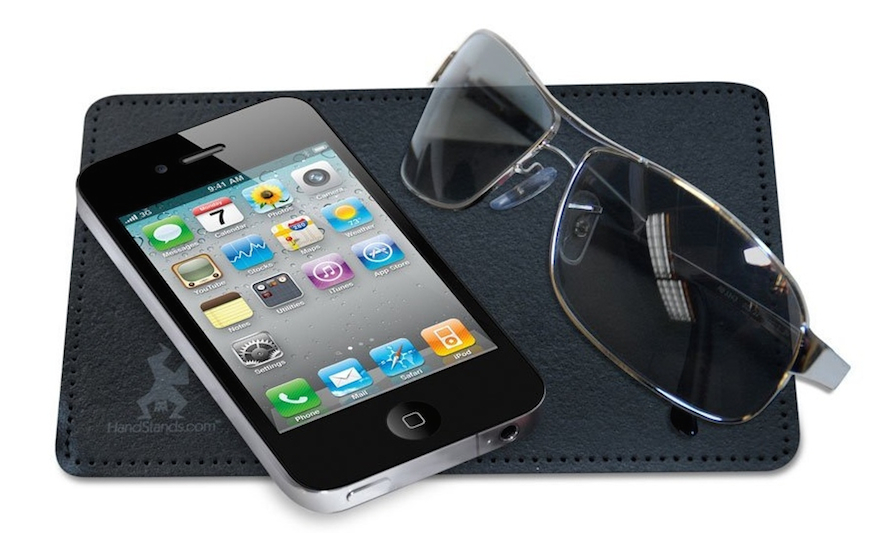 As a professional organizer, I've helped people organize their homes and offices—and their cars. One challenge drivers have is finding a good place to keep things like smart phones and sunglasses close at hand. (Hopefully, no one is texting while driving, but there are other reasons to keep a smart phone nearby; I need mine to hear my turn-by-turn driving instructions.)

Here's one solution to that challenge: The StickyPad from HandStands is one of several non-adhesive, non-magnetic pads that goes on a dashboard. There's an interesting balance here—the pad should be sticky enough to hold items even when the car is taking a sharp curve or coming to a sudden stop, but not so sticky that it's hard to remove items when the end-user wants to. And here's one drawback: Unless the end-user moves the pad around, the part of the dashboard covered by the pad won't fade uniformly with the rest. 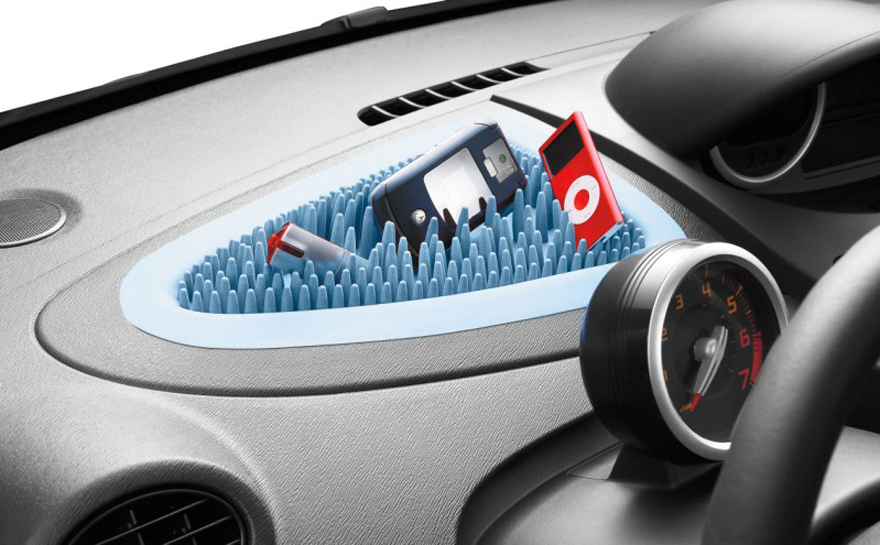 An alternative dashboard design is the "grass mat" that came with the Renault Twingo II. It seems like a cool idea—but at least one reviewer, Ivo Kroone, said the grass mat was better in theory than in practice. Kroone found it "annoying trying to fish small objects out from amongst the stalks." And it seems that larger items didn't fit well, since Kroone left them just "sitting on top." The positioning behind the steering wheel was also problematic for Kroone.

Another way to keep things close at hand is to make use of the sun visor. We've praised the Cocoon Grid-It products before, but the sun visor organizer is worth some additional attention. The Grid-It can hold a wide range of items; the one complaint I've seen is that the Velcro straps are not long enough to go around a large sun visor. 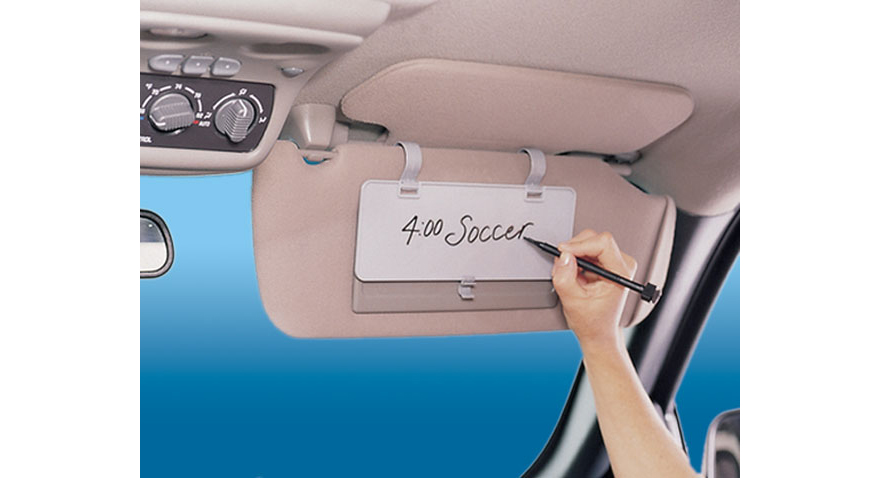 Sun visors have other potential uses, too. The Visor Notes from Vertically Driven provides a white board for any information a user wants to see or note, when stopped. There's a holder for the dry erase pen, and the cap of the pen holds an eraser. This product uses clips to attach to the visor, rather than the straps that many visor-mounted products use—and unlike many other products, it flips up so the vanity mirror is still accessible.

Personally, I use one cup holder for my water bottle and one for my cell phone in its protective case—but I never have a good place for tissues. That's the problem this visor accessory addresses. It also holds CDs, for those users who still play CDs in their cars. This product holds standard size tissues, so no special purchases are needed.

A visor can also be used to hold a travel-size tissue pack, using this tissue caddy design. Replacing the tissues couldn't be easier—you just pop in a new package. 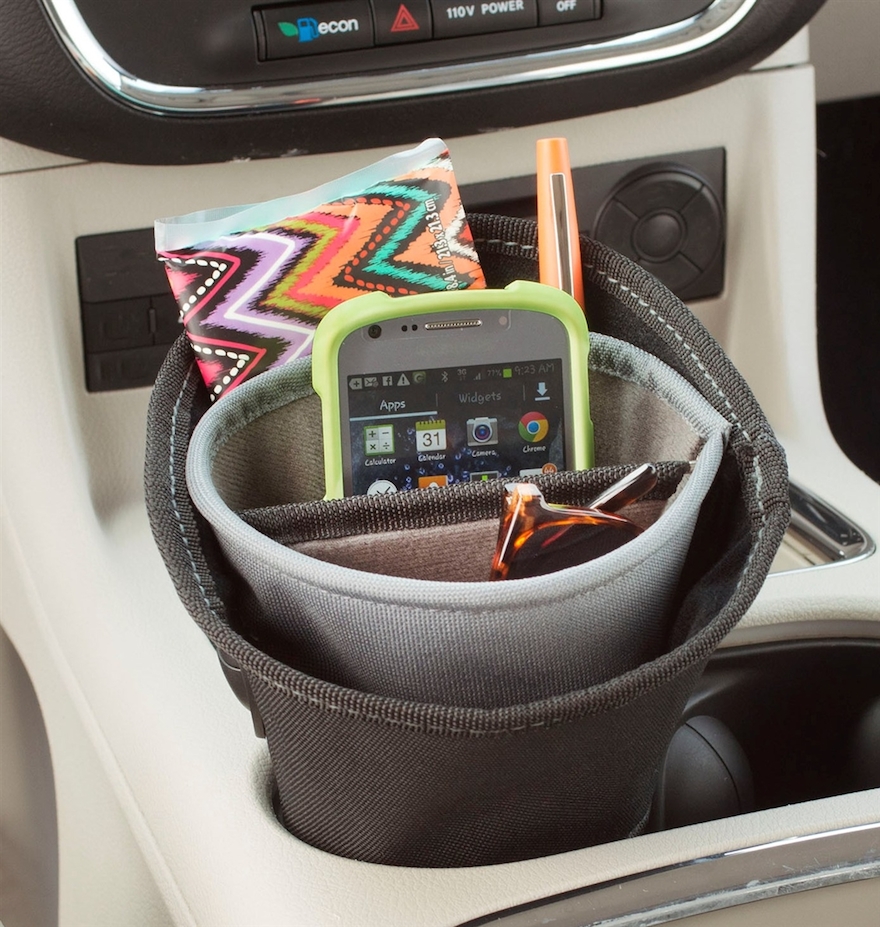 Yet another sometimes-underutilized space is the cup holder, and the High Road Ultra DriverCup takes advantage of that. The DriverCup has four lined pockets to protect the end-user's phone, glasses, etc. One design issue I see here is with cars like mine, which have two cup holders right next to each other; putting this in one would make it difficult, if not impossible, to use the other one. 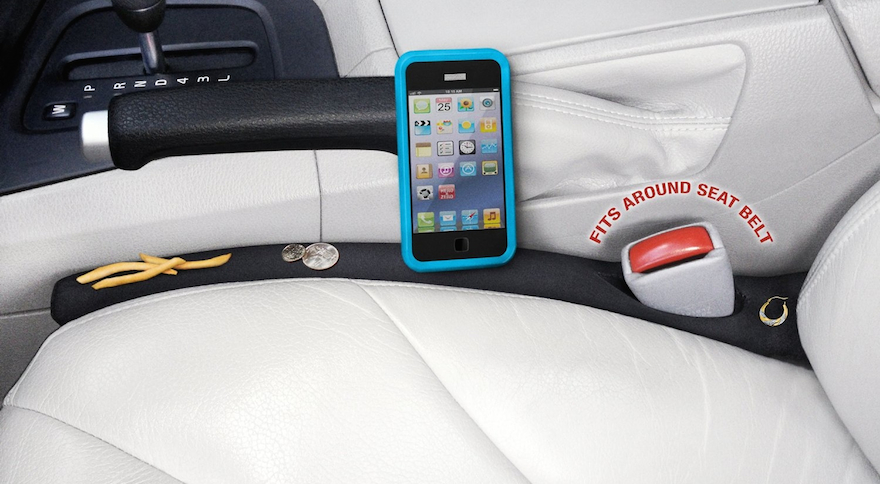 The Drop Stop addresses a different kind of problem: having things fall down between the front seat and the center console. Sometime a simple idea can be a huge help; I know people who rave about this product. 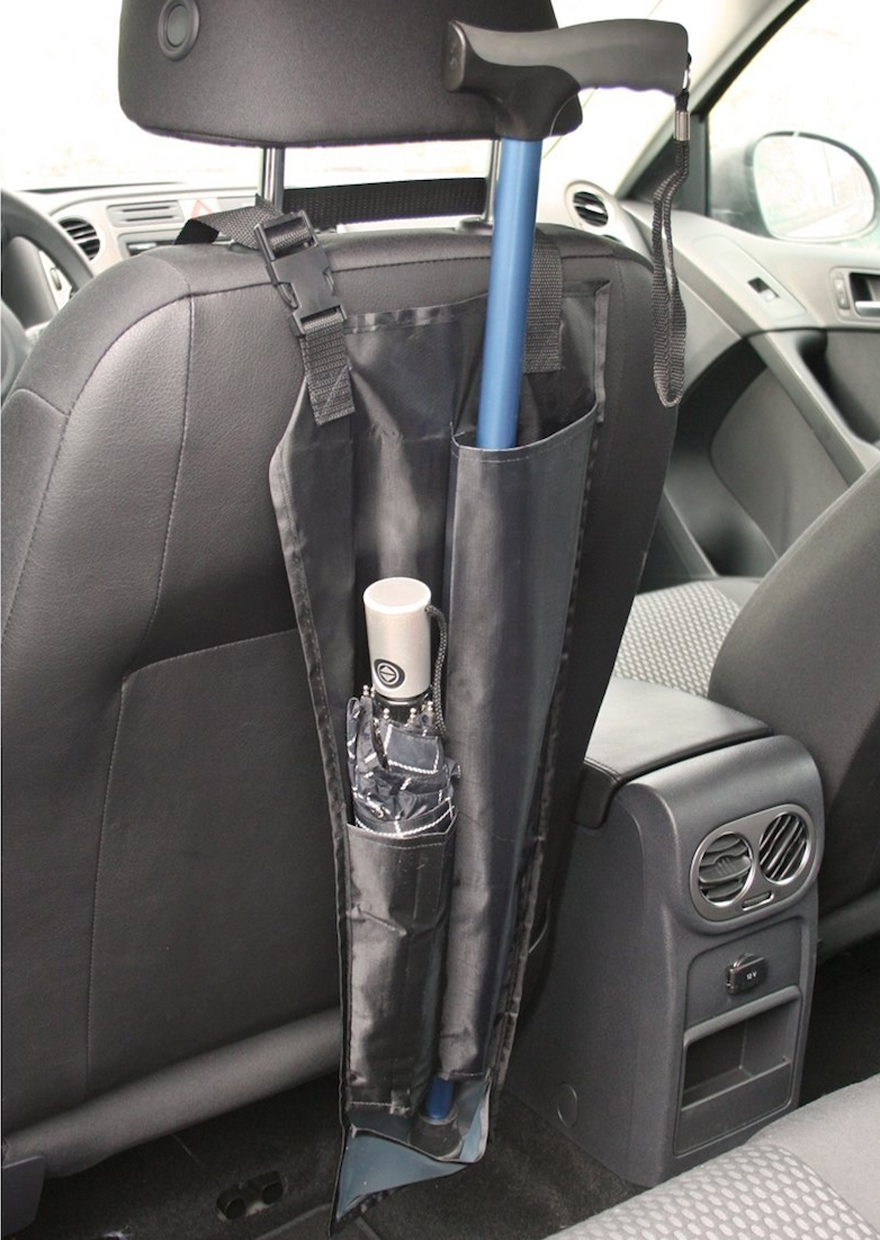 Moving to the back seat, there are plenty of seat-back trash cans, and organizers with multiple pockets—but designers have also created specialized designs to tackle specific storage problems that drivers face. This umbrella holder can accommodate collapsible umbrellas or large ones, as well as canes or snow brushes—all items that are sometimes awkward to stash away in the car. There's a bottom pocket to catch drips. 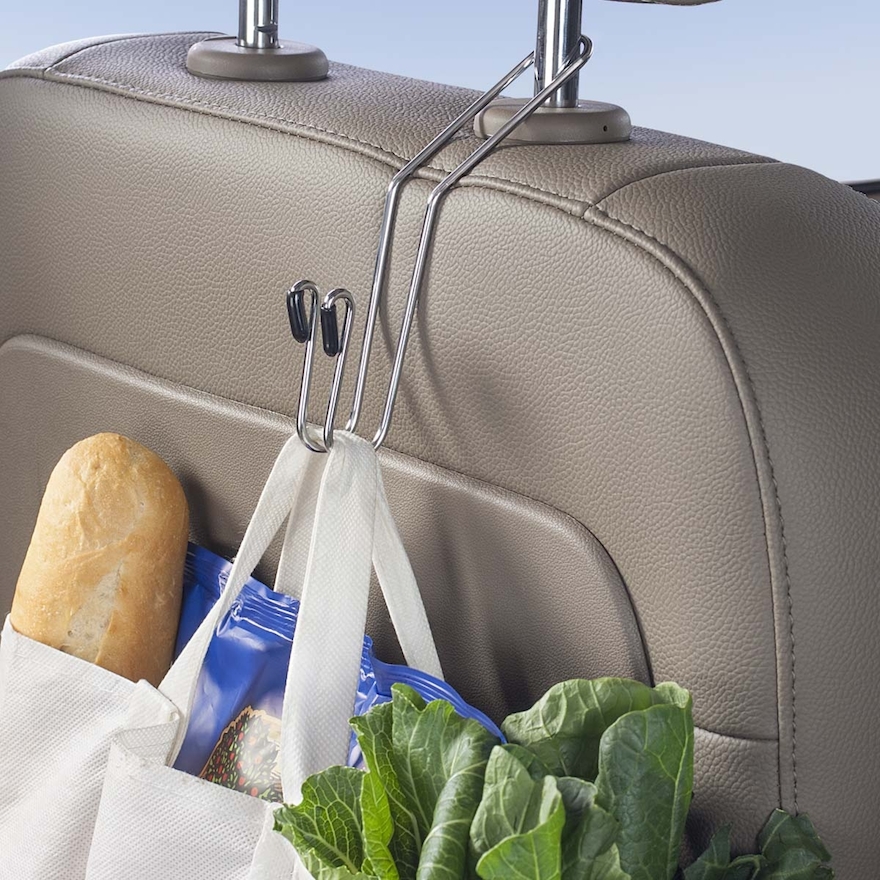 Here's another simple product that's quite useful: hooks that end-users can hang grocery bags from, keeping the bags upright so things don't fall out. And these are no wimpy hangers—each one holds 20 pounds.

Designing for Drivers: Organizing the Car