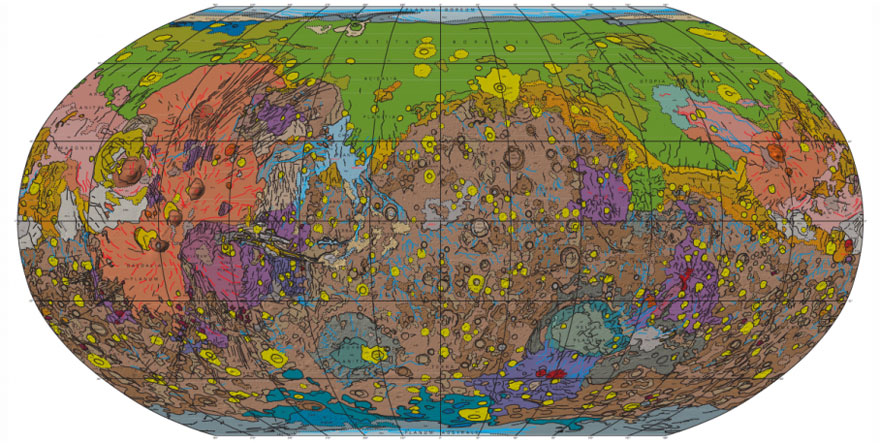 If you're anything like me, you've hit midsummer without noticing, your thighs are sweat-glued to your chair, and you aren't taking a tropical vacation within the next decade. If the heat and business as usual are getting you down, join me on a virtual tour of a cool and exotic locale on the cusp of hitting it big: Mars. And what better to inspire your fantasy travel than a cool map of the region and its history?

After centuries of squinting at that tiny red blip on our starry radar, we've gathered some increasingly good intel on the terrain and climate of Mars. The high tech ex-pats living there have been sightseeing for over ten years and the planet has a host of new snooping satellites. However, we haven't had new maps made since the late '80s! While everyone loves a good old map, old maps won't do you much good on the ground. Thankfully the United States Geological Survey has finally crammed nearly 30 years of new data and imaging into a beautiful new map [PDF].

While the last large Martian mapping effort predated digital techniques and required hand-plotting, the new one has a lot of high-tech heft behind it. This geological map was compiled using satellite photos, topological and soil information from rovers, and super detailed laser altimeter data. The result is a map that clearly breaks down the surface composition, topography, and (maybe most importantly) age of the red planet's diverse regions. As the map abstract puts it, the work is "based on unprecedented variety, quality, and quantity of remotely sensed data acquired since the Viking Orbiters." As I'd put it: It leaves previous maps in the dust.

The map is color-coded for geological age and terrain features, helpfully highlighting very old and very young land forms. The ancient areas in particular are of importance to scientists because of their connection to a potentially aquatic era in Martian history. Where water has gone, so may have followed life! Gaze through the late Hesperian greens of the Utopian lowlands, deep reds of Noachian troughs and valleys—some many kilometers across, and try uselessly to imagine the staggering height of Olympus Mons, the tallest mountain in the solar system. Talk about epic sightseeing.

For cartography enthusiasts or folks who like words more than pictures, this project pamphlet [PDF] goes into great detail on the methods used and the geologic periods shown. Zero mention of the Face on Mars though. A glaring oversight.