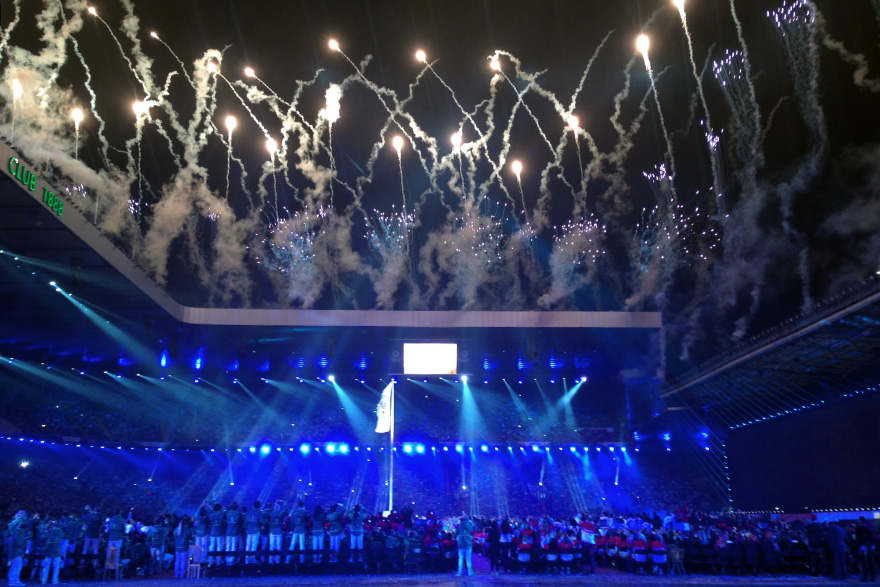 Underway as of yesterday, the XX Commonwealth Games in Glasgow have been drawing lots of comparisons to the Olympic Games of London 2012. Some of this commentary has been plainly insipid, while others have been downright mean. Lyn Gardner's review of the XX Commonwealth Games Opening Ceremony review was cruel and nasty, the way New York City fashion editors take pot-shots at Dallas by publishing images of big-haired women in loud dresses when covering social events in the Lone Star State.

While this may all come down to the "Scottish Cringe" (a national trait of self-deprecation), the Opening Ceremonies at Celtic Park on Wednesday night raise the valid question of how one distills culture and values into a stadium floorshow? 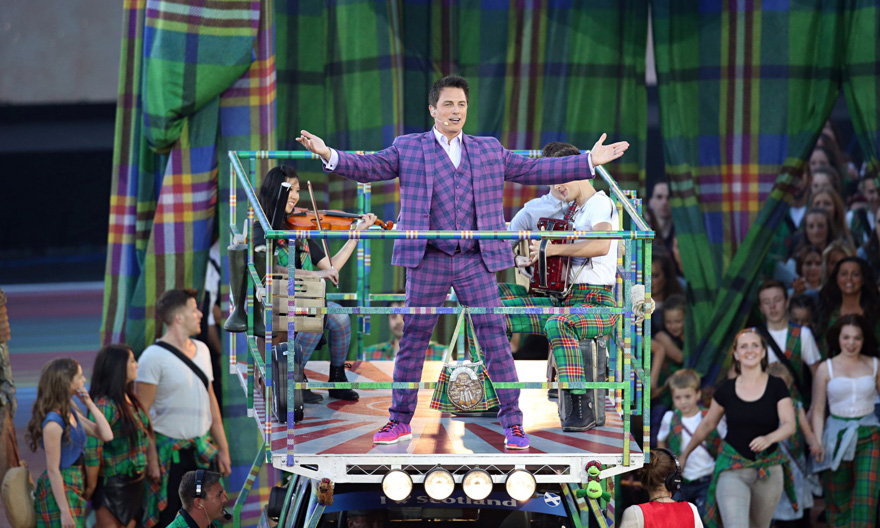 To be sure, there were several cliché moments like giant dancing tea cakes, an inflatable Loch Ness Monster and John Barrowman's costume of purple tartan. But there were also some inspired moments like the Scottish Ballet's touching duet to a muted version of the Proclaimers' "500 Miles"; the Scottish terriers accompanying each nation's athletes; and the gay kiss in the opening moments. This last gesture was an unequivocal statement to the 42 participating countries that have laws against homosexuality on their statute books: These Games (a.k.a. The Friendly Games) are a celebration of equality and diversity.

But aside from the impossible task of portraying a nation's historical contributions in a one-hour spectacle (London 2012's supermodels and Sochi's weeping bear seem farther from the mark than highland dancing on whisky barrels), there is some stellar design work associated with the XX Commonwealth Games at Glasgow 2014. 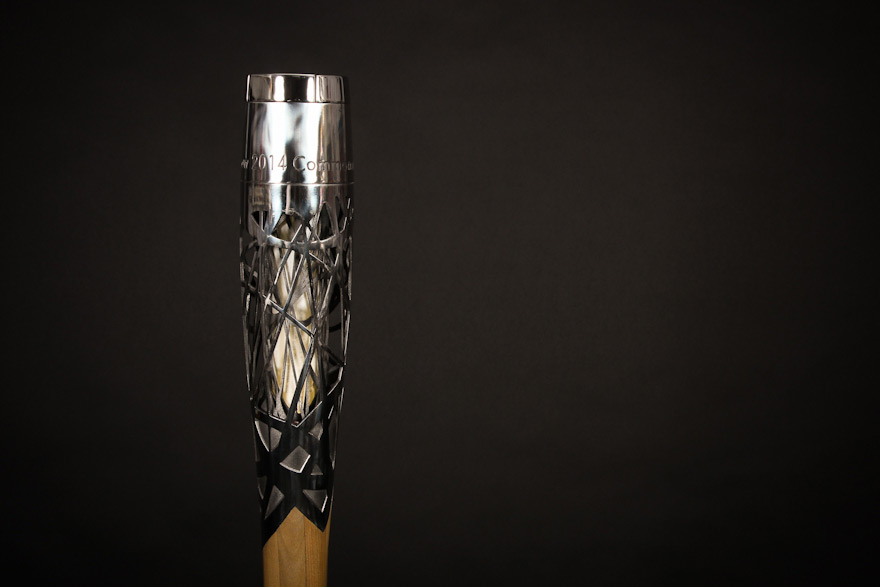 In addition to the Queen's Baton, which we reported on last October, the designs of the medals, podiums and medal bearers' costumes all have a quality of elegant abstraction as they contemporary updates to traditional representations of Scottish culture at the medals ceremonies of the Glasgow 2014 Commonwealth Games.Taking his design cues from 4C's design for the Queen's Baton, the medals were designed by jeweller and Glasgow School of Art lecturer Jonathan Boyd. Boyd worked on the designs with a team from GSA's Silversmithing and Jewellery Department: Helen Marriott, Andrew Lamb, Anna Gordon, Nigel Munro, Yusuke Yamamoto, Satoko Takemura, Rhona McCallum, Malin Winberg, Shona Guthrie and Michael Pell. The medals were created by a 15-step process combining 3D printing and hand-finishing techniques that make each one truly unique. 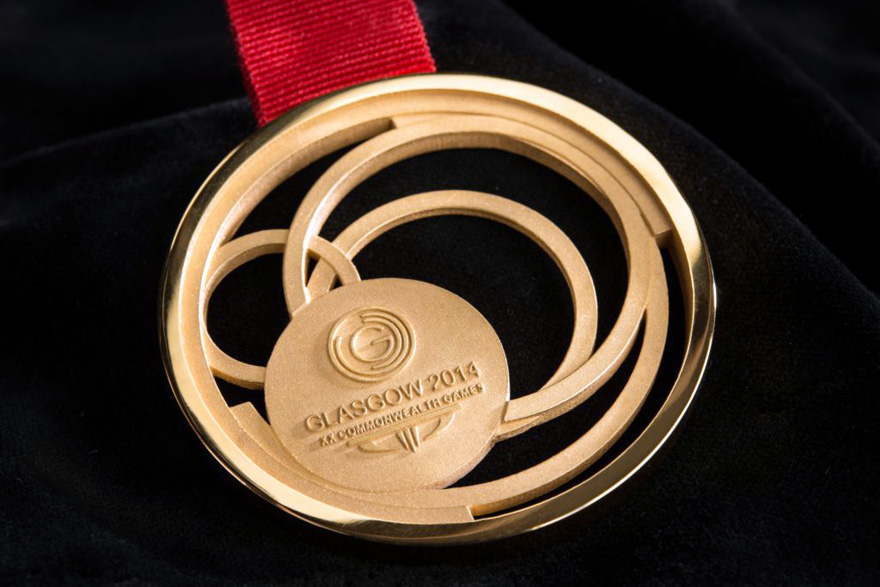 Likewise, woodworker and interior designer Paul Hodgkiss, the designer of the wooden podiums, trays and quaichs (traditional Scottish two-handled drinking cups), further alluded to the Glasgow Style with his own unique spin. The podiums on which the athletes of the Commonwealth Games receive their medals have been crafted from fallen trees around the host city. Mr. Hodgkiss and his team sourced the wood from fallen elm and sycamore trees from local woodland with help from Glasgow City Council's land and environmental services. Elm was used for the gold section of the podiums, while sycamore comprises the silver and bronze sections.

Kerry Nixon designed the dresses worn by the female medal bearers. The especially commissioned 'Glasgow 2014' tartan—designed by a 15 year-old competition winner, Aamir Mehmood—was modified with a slight curvature so that the stripes of the tartan would still appear straight despite any refraction caused by the form of the dress. This specialized version of the tartan was printed onto the silk fabric for the dresses, piece by piece at the Glasgow School of Art's Centre of Advanced Textiles.

Ms. Nixon also styled the male medal-bearers' kilts with the support of Harris Tweed, which produced the bespoke fabric.

So let the snarky London columnist cousins take aim at the Commonwealth Games, Glasgow and her Opening Ceremony. As subjects to the crown, we are all rather tyrannized by public opinion at one point or another. As one member of the Commonwealth Games Federation put it, "We're the friendly games; not the Hollywood Games! We could have spent £20m more on the Opening Ceremony but then that would be £20m less that went into sports development and legacy." So, while the fumblings of Sir Chris Hoy with HRH Prince Tunku Imran may have been a typical crisis of confidence for a Scotsman in the face of the Crown, as a nation, the Scots' Gallus—their cheeky, self-confident, irreverence—brightly shone through Wednesday night's festivities and it seems that even Her Majesty was amused. Meanwhile in a broad stroke of hubris, British Prime minster David Cameron has, today at Glasgow's Emirates Arena, yet again suggested to IOC president Thomas Bach that London could step in for troubled Rio to host the 2016 Olympics.