In the Details: These 'Kinetic Boots' May Eventually Save Marines From Lugging Around More Than 15 Pounds of Batteries

On any given day, many Marines carry more than 15 pounds of batteries along with all their other rations and gear. Add that to the fact that they're mostly on their feet, constantly moving, and you have a recipe for fatigue. But what if you could harness the energy from their movements and the weight of that gear while also decreasing the amount of poundage these Marines have to heft? That was the idea that brought together Lockheed Martin and STC Footwear to design and develop a pair of boots that capture the energy from all those footsteps and turn it into usable power.

The Kinetic Boots were announced early last May at the Marine Corps' Experimental Forward Operating Base (ExFOB) event, where Marines demonstrated their ability to generate around three watts of power after an hourlong walk, enough to charge an iPhone 5 three times. This just a start—Lockheed Martin and STC anticipate that the boots' have the potential to generate nearly twice as much power after further development.

"There were two or three key challenges that we identified on day one," says Michel Bisson, CEO and Chairman of the Canada-based STC Footwear. "The main one was that we wanted to use only the wasted energy generated when the person walks or runs. It was very critical for us that no additional work be required by any part of the body (i.e. joint) other than carrying the two to three ounces that the system weighed." Lockheed had previously explored solar-power chest panels and helmets, but those devices added significant weight, and STC was determined to avoid that trap. 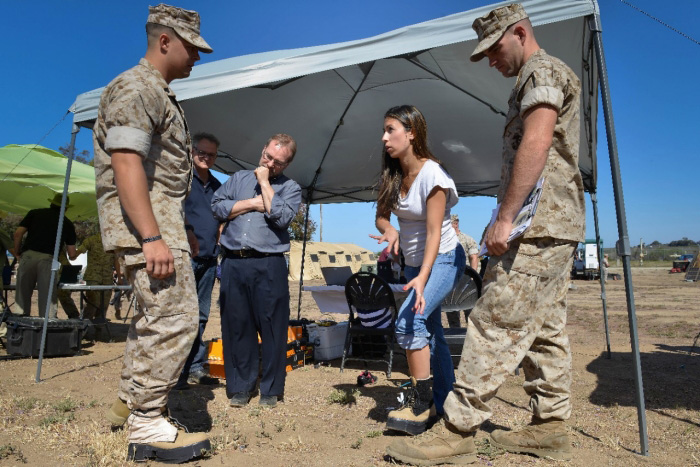 "The second challenge was that the system should be 'invisible' to the wearer," Bisson says. "This means the person has to forget that he is in a very futuristic boot and that he is harvesting energy." Indeed, no one would mistake the first edition of the boot for a sci-fi movie prop; if anything, the platform sole slightly echoes disco shoes of the seventies. Lockheed Martin plans for future iterations to be "ruggedized" in ways that will help them better combat the elements like dust and mud, while also standardizing the components' positions to increase their reliability.

The third key issue was finding a way to efficiently convert energy from walking into electricity. "We're hoping it can eventually become a total power solution and eliminate the need for most batteries, but right now the focus is on increasing the power output and efficiency of the system," says Rebecca Schwartz, nanotechnology lead at Lockheed Martin Information Systems & Global Solutions. "Once those are optimized, we'll be able to evaluate the power distribution plan for the end user that will be beneficial and eliminate battery weight as much as possible."

While Lockheed Martin can't divulge too many "sensitive details" about the boots' internal components, piezoelectricity is at play, as the boots collect kinetic energy from the natural movement of a footstep. "So when you think of all the parts of a footstep—you have the compression, the lift of the foot, the movement to the next step—all of that motion creates kinetic energy that we're now able to capture using the boot's internal components inside the sole," explains Schwartz.

Once the energy is generated, a connector is used to convert it to usable power compatible with whatever system it is charging—for the user, Schwarz says, it really is as simple as plugging your device into a wall, but the harvester replaces the outlet.

"Ultimately, we want to generate enough power for it to connect to multiple systems and reduce the need to carry multiple batteries and battery backups," Schwartz says. "Another option is using it to recharge batteries so that there is constantly a battery being charged and ready for use. This is not a simple task and it means being compatible for multiple types of systems. If we want to simultaneously power multiple systems, we also need to consider the loss during power splitting and the whole chain."

Of course, Lockheed and STC are not the only ones experimenting with energy-generating footwear. SolePower raised more than $60,000 on Kickstarter last year for its power-generating insole, and DIY types can even retrofit their own shoes to generate small amounts of electricity. But the fact that Lockheed Martin is exploring the technology for the Marines is significant; as with many other innovations in the military sector, the consumer goods market can expect a trickle-down effect. STC's Bisson envisions endless possibilities for the technology, such as long-distance runners or hikers who could power their phone or iPod regardless of where they are or how long they've been on the move. And Lockheed Martin hopes to expand this technology to other wearables to power future devices that require constant charging.

In the Details: These 'Kinetic Boots' May Eventually Save Marines From Lugging Around More Than 15 Pounds of Batteries