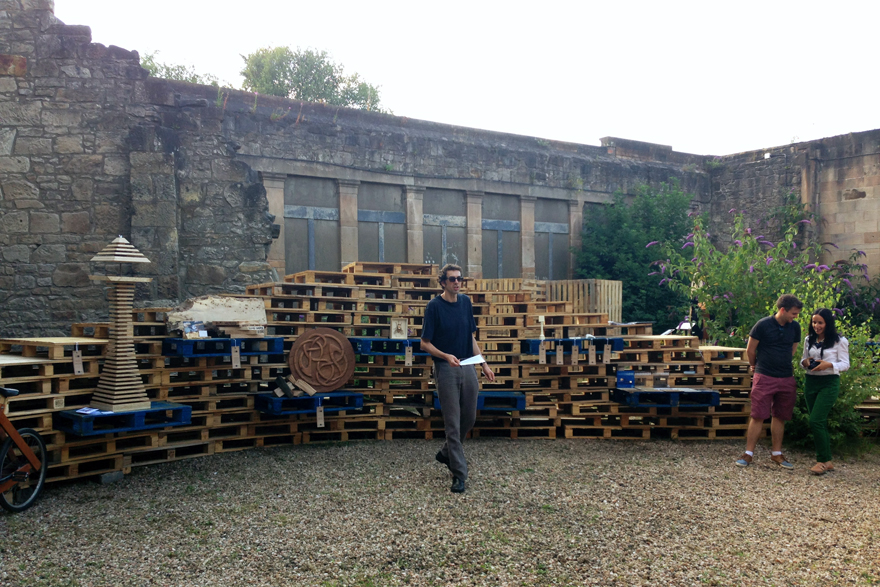 On Friday, July 25, the Scottish Ecological Design Association launched the latest issue of their magazine, which is published two to three times a year, at Greek Thomson's Caledonia Road Church in Glasgow. Local leaders in sustainable design presented their work, from MakLab (a turbo-charged version of your neighborhood fab lab) to the Glasgow Wooden Bike Project and GalGael Trust's covetable reclaimed lumber, among other noteworthy projects.

First up was Oliver Gooddard's "Let it Bee." His beehive and integrated apiary made of sustainable timber ensures that honey stores are kept in sanitary condition by segregating the queen's chambers from those of the worker bees. Based on years of beekeeping experience, Goddard abides by sustainable cultivation practices: Rather than selling all the honey from the bees and feeding them sugar during the winter, they harvest only what they might use and allow the bees to keep the nectar they've worked so hard to create for the long winter months. 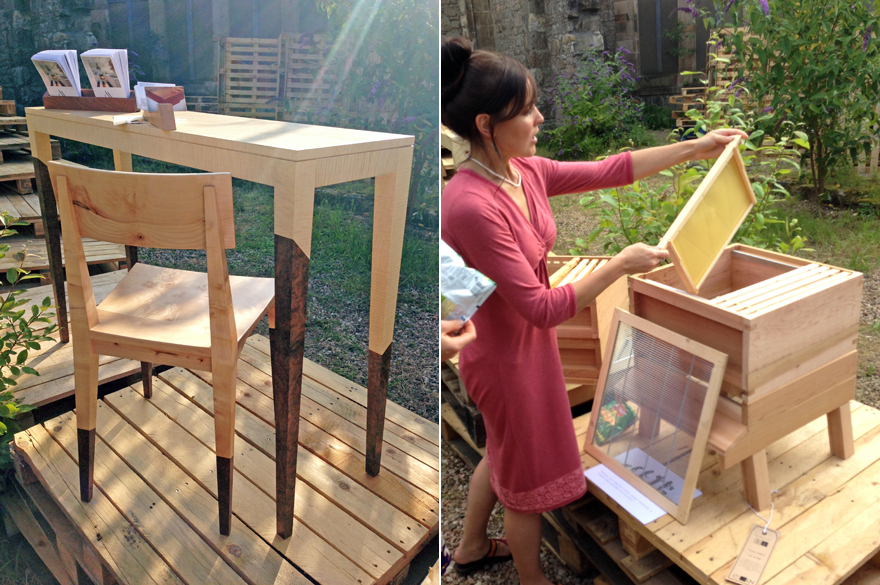 Another stunning installation was the dining set "Sexy Legs," a walnut and sycamore ensemble by cabinetmaker David Watson. Each piece is finished with an alternate set of burr walnut or fiddleback sycamore "stockings." From his Clyde-side workshop in central Glasgow, David and his team of skilled craftsmen manufacture high-quality furniture sourced from only certified sustainable forests. 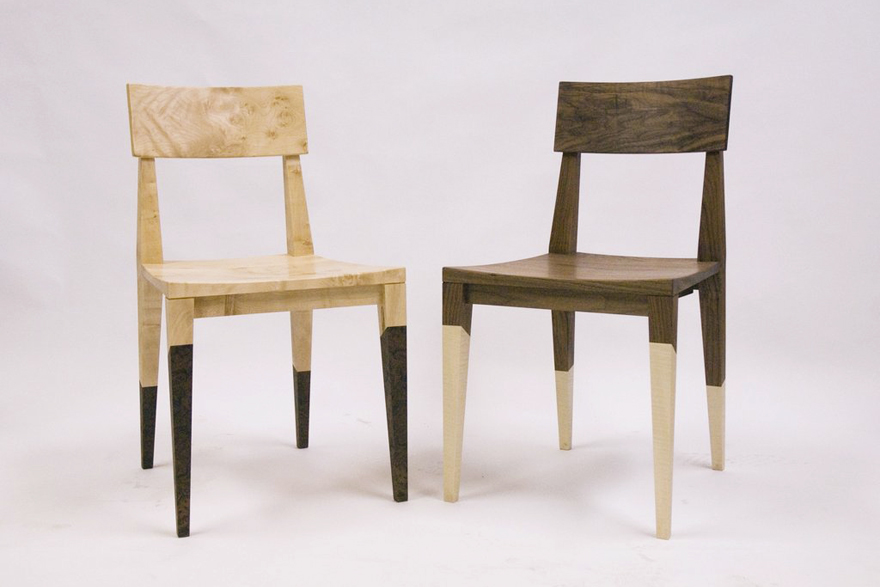 But perhaps the most impressive exhibit was a team effort from a Scottish-Italian, husband-and-wife studio. Venetian expat Annalisa Simonella has created a stunning and extremely stylish collection of transformable couture. Simonella employs multifunctional design along with interactive textiles and technologies to create versatile garments that are unique, stylish and slightly futuristic. Her Nijo Modular Fashion System is a "responsive and responsible" collection of garments. Responsive, because the pieces designed to respond to the climate and the immediate context, allowing the wearer to respond to the increasing complexity of living in an urban environment and the variety of activities we face in our daily lives. Responsible, because they are designed to be durable and timeless. The Nijo Modular Fashion System is 'holistically' sustainable. Not only are all materials sourced following ethical principles and locally produced, they are also meant to be "investment pieces," to be worn and cherished for a long time thanks to the high quality materials (organic cotton and raw silk woven with hemp fibers), superior tailoring and a timeless sensibility.

The garments are displayed on husband Brian Loudon's retro-futuristic flat-pack mannequins. Using a Kinetic to 3D-scan a vintage tailoring dummy's exact dimensions, Loudon imported the model to Rhino 3D and used Grasshopper to slice it into flat profiles for fabrication. The mannequins were CNC-machined out of 1/4” plywood at Glasgow's MakLab. Loudon's design services firm Loud1 Design did the surface modeling for the Queen's Baton for the Commonwealth Games by 4C Design. (He was also the mastermind behind the puzzle mechanism in the baton. Loudon says that he was inspired by karakuri, the Japanese art of puzzle boxes that also greatly influenced Charles Rennie Mackintosh during his day, not the least because it was used as a method for teaching Japanese carpenters their craft.) 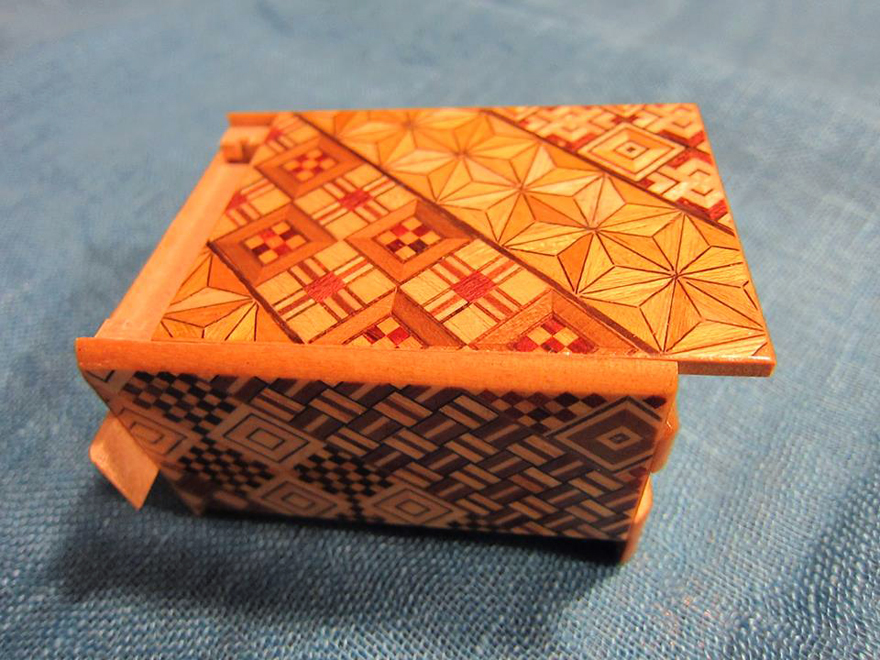 The event also marked the grand re-opening of the Alexander "Greek" Thompson's Caledonia Road Church. Located in Glasgow's former immigrant/industrial ghetto, the Gorbals both the Church and its surroundings are currently benefiting from massive regeneration efforts. 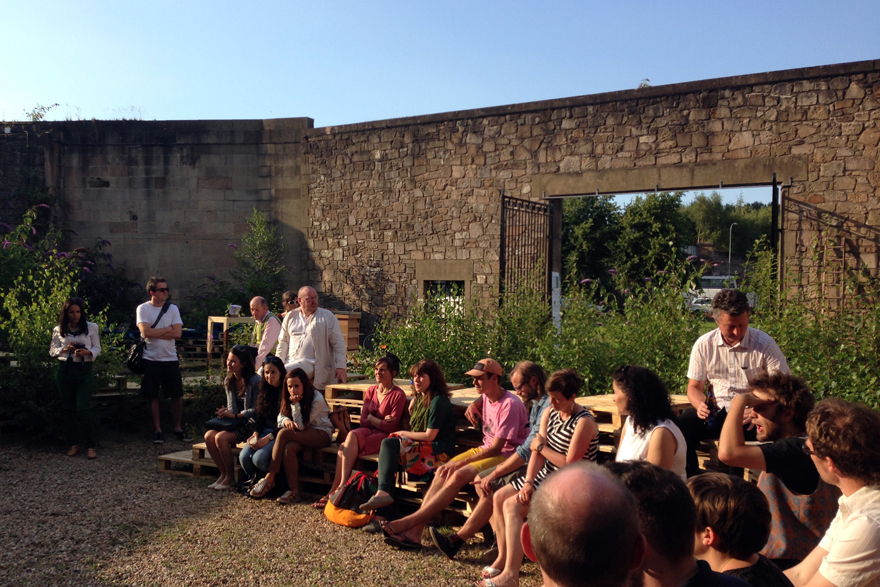 Thomson was a highly regarded architect throughout the nineteenth century and was often described as the rising architectural star of Glasgow in his day. He is considered to be as influential as Charles Rennie Mackintosh throughout the Victoria era and again from 1950–60 when his work was revived. Thomson's work is very distinctive, drawing on eclectic influences from Greek, Egyptian and Levantine architecture. 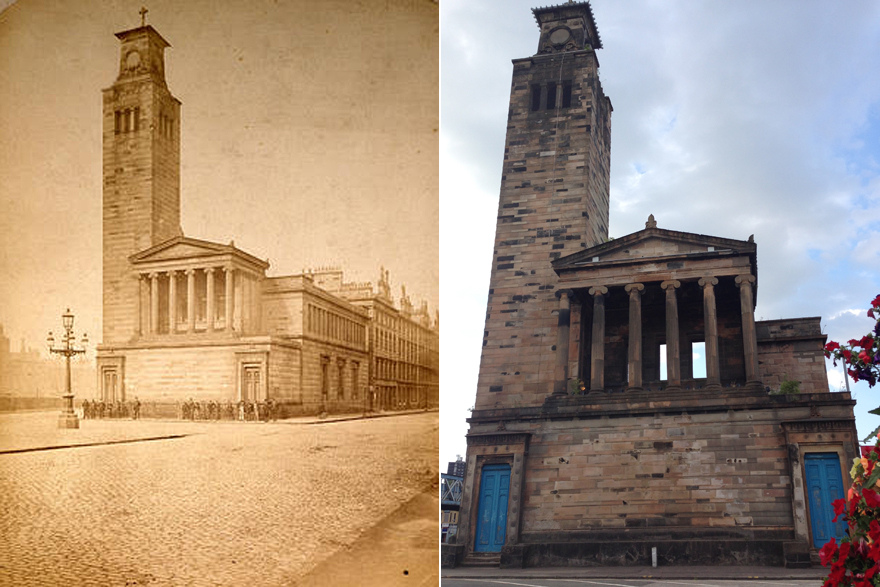 The open-air building has been reopened to the public just in time for the Commonwealth Games. The SEDA magazine launch is one of a series of planned events over the coming year, which have come about through a collaboration between Graham Hogg, of Lateral North; architecture students Frankie Murphy and Charis Cheiridou; and the Wave Particle artist collective from the Gorbals area of Glasgow. "The building is hugely significant within Glasgow and has lain derelict now for over 50 years. We want to restore it for the community. No one has ever had the opportunity to go in so we want to open the gates for local people to enjoy," said Graham Hogg, a local graduate set on bringing the ancient stone back to life.