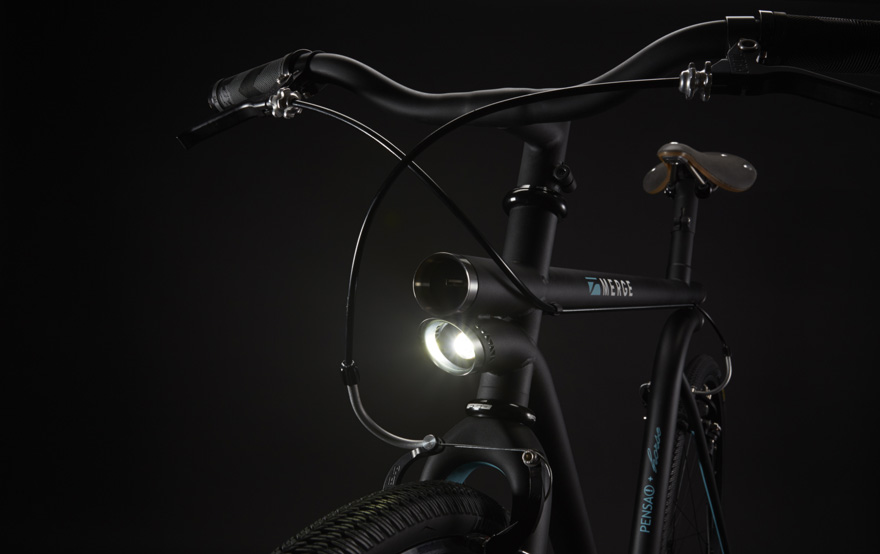 Today saw the unveiling of the collaborative bicycle designs that are going head to head in the third edition of the Oregon Manifest, in which five teams in as many cities set out to create and craft the best urban utility bike. As of this morning's launch, the public is invited to vote on their favorite one, which may well be produced by Fuji Bikes in the near future. We are pleased to present exclusive Q&As with each team so they have a chance to explain why their bicycle is the best before the voting period closes this Sunday, August 3.

Core77: Did you and Thomas know (or know of) each other before the collaboration? What was the matchmaking process like?

Mark Prommel (Pensa): We had seen Horse Cycles on various design and local maker blogs, and were already really into his work. When we were invited to participate as the NYC representative for The Bike Design Project, Thomas Callahan was definitely at the top of the list of bike craftsmen we were interested in talking to. After meeting a few builders, the choice was easy.

One of the things that really made this relationship work well was the fact that Thomas is an established designer in his own right, and we at Pensa are also accomplished makers and fabricators. So it wasn't just a "we design it / you build it" relationship—it was a fully collaborative from the first day. All of our concepts were born out of our first few weeks of open collaboration workshops. Thomas was very open to our approach of establishing the big picture story of the bike first, ensuring it was unique, compelling, and based on real insight about the New York City urban rider. We had to make sure that we were looking at the full range of possibilities for the bike and that the foundation of our concept would have enough layers to make the end result truly special. In developing our early concepts together, Thomas lent a wealth of experience and expertise that prevented us from going down paths that would have been wrought with insurmountable challenges.

We thought for some time about modular solutions. Attach the utility you want when you need it, and take it off when you don't. But we kept rejecting these concepts. How am I supposed to know when I will need certain features on my day to day rides? When and how do I decide to attach them or leave them home? We eventually settled on the notion that the bike needed to have every function, from cargo to lighting to security to fenders, right there at your fingertips, ready to spring into action at a moment's notice, but also able to disappear when not needed. We felt that in a dense urban environment like New York City, we had to offer the option of being able to ride hard and maneuver easily on a simple, streamlined, stripped down bike at any time.

The concept came together in a few rough sketches where we were playing with the terminations of the top, seat and down tubes. With large radius bends, we started illustrating these tubes passing through their normal termination points. Then these tube ends became functional access points. At first glance, the frame has classic lines and proportions, but these simple refinements give the frame a striking appearance that draws you in to look closer and discover the functionality inside. It was important to us that the bike didn't look like anything was missing when it was stripped down, a cohesive whole in any state. We finished off the open tube ends with machined stainless details that create a refined sculptural end cap for each tube.

In a utility bike for New York City, we couldn't see having big platforms and racks hanging off the front and rear of the bike, which often just sit empty. They get in the way both on and off the bike: When navigating tight, crowded spaces when riding and when carrying the bike up and down the narrow stairs of your fifth-floor walkup. They also affect the bike's center of gravity and ride quality. This didn't mean we were all about creating a bike for aggressive riders who are hard-charging and darting in and out of traffic, but rather creating a bike that inspires confidence in its rider that he or she can be ready for the challenges ahead when navigating crowded and unpredictable streets. 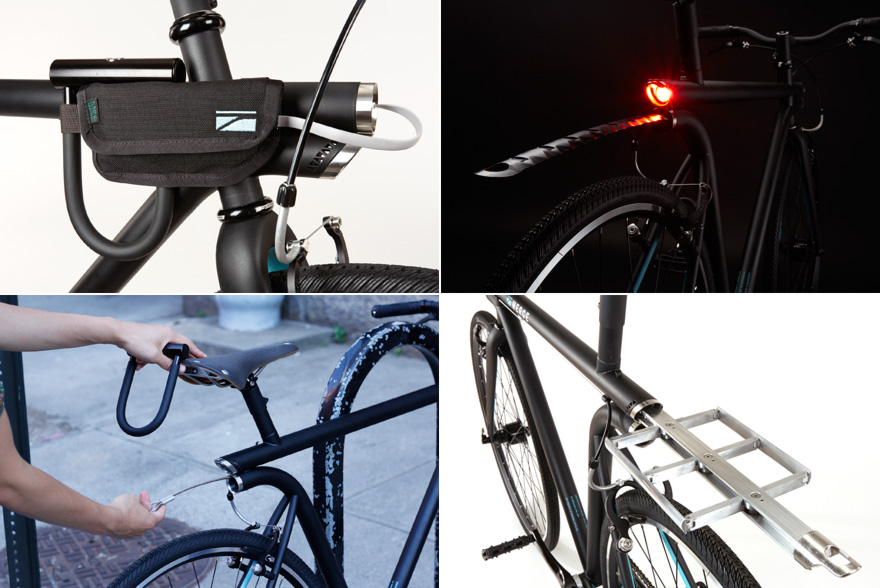 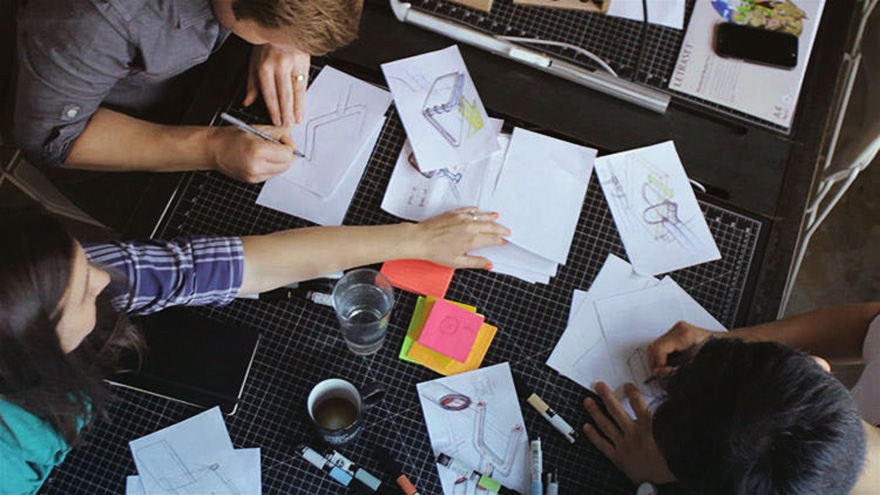 Besides environmental factors such as weather and road conditions, how did the backdrop of New York City inform the design of the bicycle?

The name of the bike is MERGE, and that name was inspired on many levels by New York City. As I mentioned, we wanted to merge the various functional features of the bike into a cohesive form, but fully integrated in a way that we had not before seen. But we also took other inspiration from our city. It is full of vibrant and adaptive spaces. If you look at the bird's eye view of Manhattan, Broadway cuts through and merges with the avenues at the various Broadway triangles, Times Square, Madison Square, Union Square, etc. These spaces are alive and vibrant and constantly evolving. We were trying to imagine a bike that could do the same. The bike should seamlessly merge with the flow of traffic, merge with your day to day changing needs, merge within your apartment space, and merge with your riding style.

If we felt that we needed to create something custom to enhance our design from a visual or functional standpoint, we did it. The frame is fully custom. The handlebars are a custom welded assembly in order to be more seamless, clean and minimal. Thomas believes in creating steel frames with carbon forks for a great feel on an urban ride. There is a particular ENVE fork that he likes—it allows for a range of tire types—and we thought it felt perfect with our design visually as well, so we didn't go custom there, except for the paint. As for specific innovations that could stand alone, we have talked briefly about the potential for offering our top tube as a complete assembly with integrated lighting and USB charge in the front and an integrated seat post to allow for the spring loaded, retractable rack with integrated lighting in the back. It would likely have to change quite a bit, but could be possible. One of the other components that we love on the bike is the smartphone and U-lock holster that hugs the front of the frame. It was developed with Rob Nelson from MER bags. He is another local designer and maker with beautiful hand-crafted work. 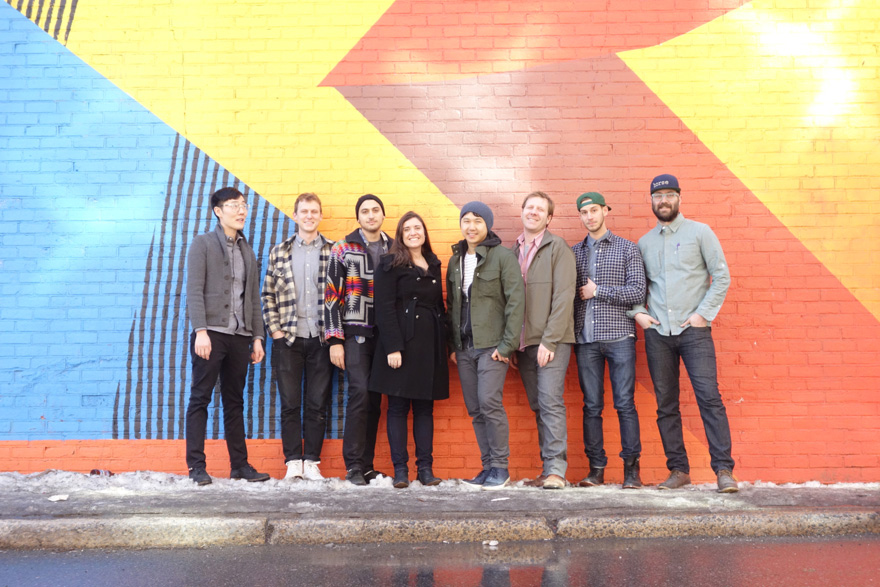 Stay tuned for exclusive Q&As from each of the teams every day this week—then you can be thoroughly informed when you vote for your favorite one by the August 3 deadline!