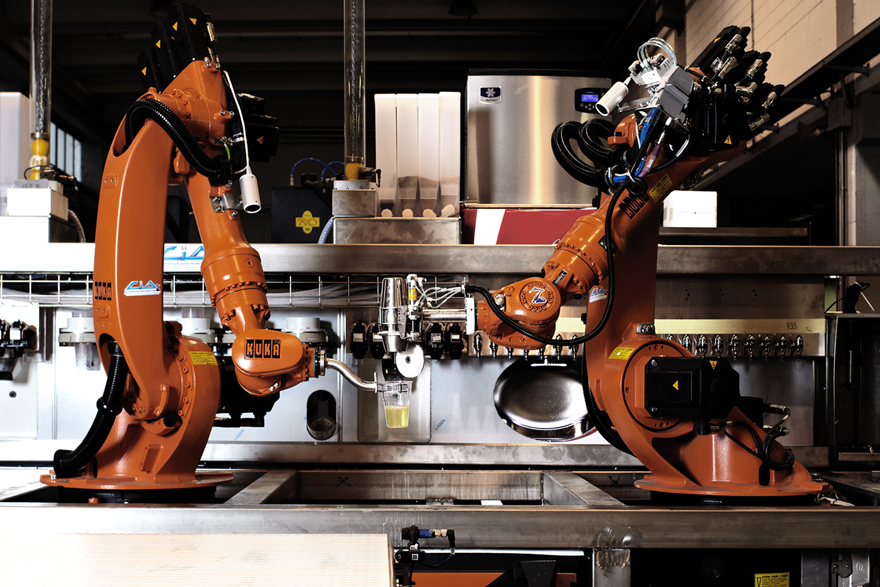 With artisanal cocktails in vogue these days, it seems as though a new speakeasy is opening every other week here in Brooklyn. Now that reclaimed wood and Edison bulbs are de rigueur, Makr Shakr offers a rather more futuristic alternative to the dandily bow-tied, impeccably mustachioed barkeep. Sure, their slogan is an open-ended question—"What could you make with the power of three robots in your pocket?"—but surely a stiff drink is among the top responses. The drink-slinging robots were unveiled at the 2013 Milan Design Week and also made an official installation debut at the Google I/O on May 15, 2013. Getting the project ready was a team effort from groups at Pentagram and the MIT Senseable City Lab. 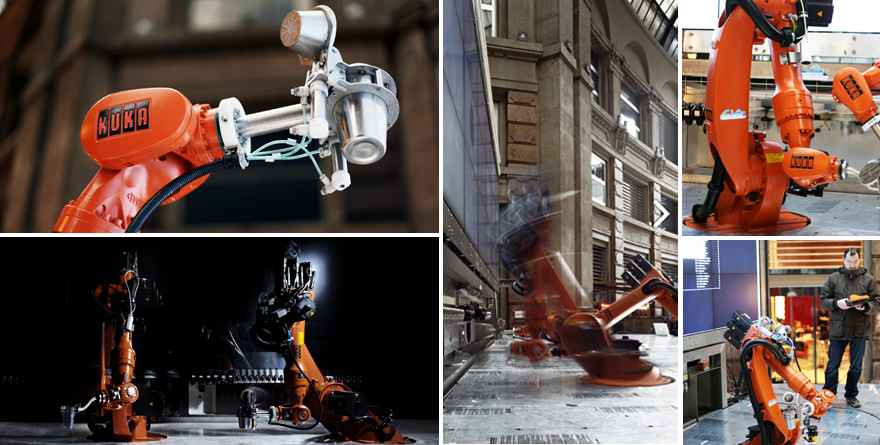 Makr Shakr features three robots that make the drinks, but orders were taken via social media, and eventually the team developed an app for easier ordering and recipe sharing. "At the installation [in Milan], the data was coordinated through the app, and users could also share their drink orders through Facebook and Twitter," says Pentagram's Ken Deegan. "Each user's avatar became part of the data visualization showing the orders, where it was grouped and visualized alongside other users and their drinks."

Considering that data collection happened in Milan and the subsequent event at Google occurred a short week after the initial installation, there was little time for fine-tuning. But the toughest part wasn't the time crunch: "Conceptually, the design challenge was transforming something as ordinary as ordering a drink at a bar into using an app to order drinks from robots, and have it be an enjoyable and seamless transaction," says Deegan. 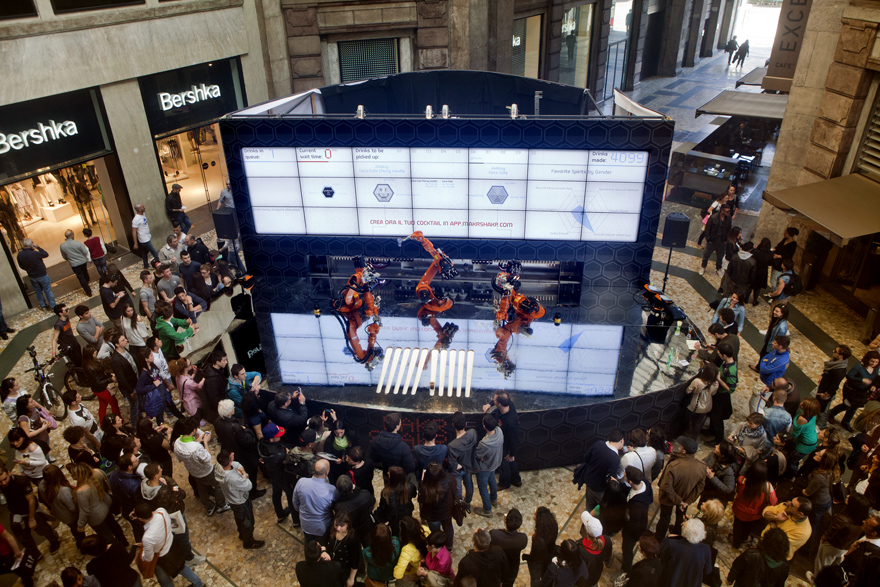 It sounds like a scene straight from a sci-fi film—and, honestly, it looks it, too. Check out the video to put it all into perspective:

Never fear, bar patrons and tenders; Makr Shakr isn't looking to replace you or cheapen your social experience in any way. "For Pentagram's part, we can tell you that our team has been in many, many cocktail bars and love our local mixologists," Deegan shares. "We mentioned the project to a few of our barkeep friends and they said, 'Are you trying to steal our jobs?' But Makr Shakr is not really about replacing bartenders; it's about creating an entirely new experience." And a new experience it is—not only are the robots mesmerizing when not in use, the movements were patterned after ballet dancer Roberto Bolle and choreographer Marco Pello making them a sight to be seen.

Instead of focusing on the interactions among drinkers and robots, the team took note of the drinkers. "Chats with the bartender may have been lost, but social interaction among the people in attendance was gained," Deegan says. "The installation was a spectacle, and the audience was enticed to talk to each other. The movements of the robots and the flow of the data visualization display were hypnotic. People start paying attention to what drinks are being made and getting ideas for their own drinks, which is the point of the whole exercise. We've all become accustomed to seeing screens in bars, but nothing like this." 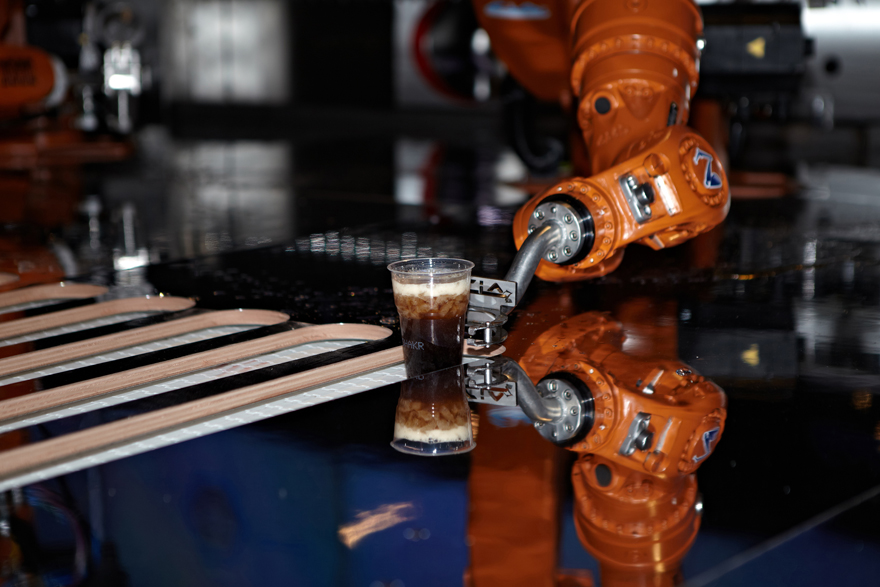 MIT Senseable City Lab director Carlo Rotti calls this kind of social consumption dynamic an activity in "design, make and enjoy." The data collected at the installation can be visualized in a myriad of ways: age, gender, ingredient preference, etc. "It was about mixing technology with human interaction, to look at how a group of people can be creative together," Deegan says. Seems like all of the hard work paid off—the project ended up being named a Professional Runner Up in the Interaction category of the 2014 Core77 Design Awards. The only thing the team would have changed? "If only we could have had the robots make a drink for the judges." 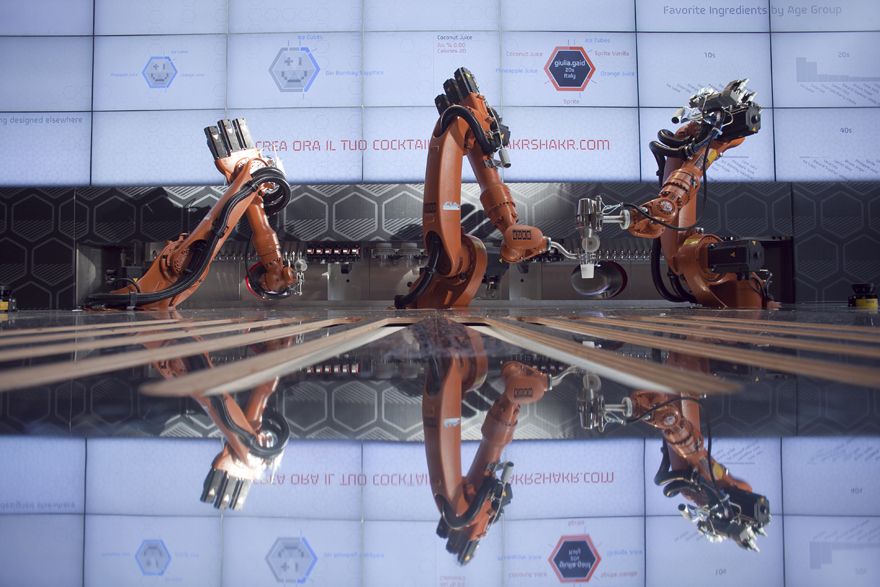 Check out a full list of this year's honorees here