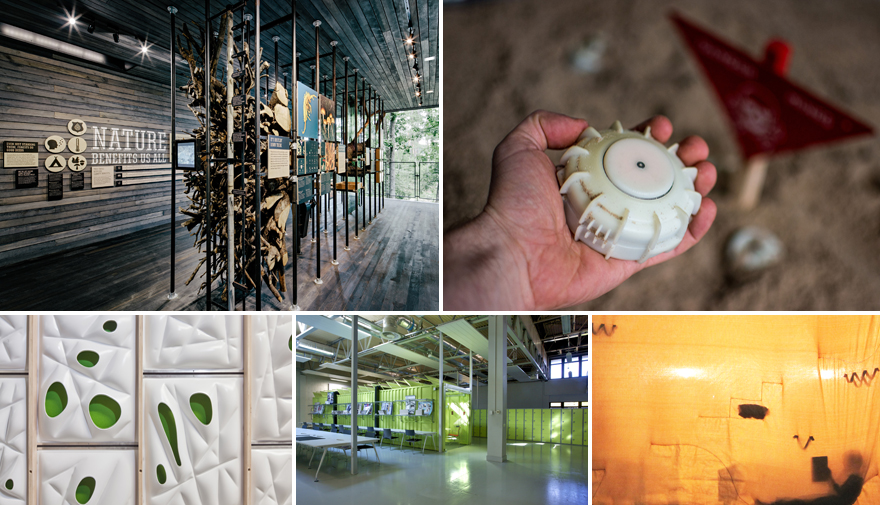 From permanent installations to temporary structures, perhaps no area of design reflects our current cultural disposition more than the deesign of space itself. This year's submissions for the Interiors & Exhibitions category of the 2014 Core77 Design Awards did a fantastic job of reminding us of the many ways it can be interpreted. The jury team, led by Geoff Manaugh, recognized a dozen entries this year, from thought-provoking student concepts to impactful improvements to extant spaces. 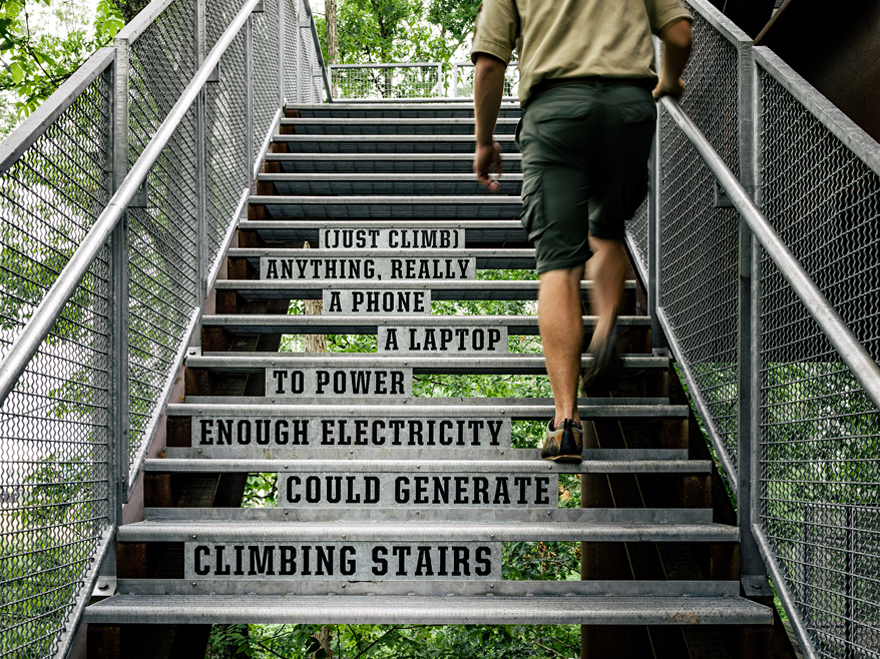 Volume Inc. and Studio Terpeluk teamed up to bring sustainability to an organization known for its commitment to tradition. Not only does their Sustainability Treehouse for the Boy Scouts of America place visitors in a sustainable environment, it also tells a story through important facts and suggestions. "While the project risks falling into kitsch or even cliché, it nonetheless manages to be an imaginative and highly inspiring sequence of spaces for just the right age of user, the young Scouts who are its intended audience," says Jury Captain Geoff Manaugh. "The Treehouse also brings a message of sustainability—of personal responsibility, recognition of one's own environmental limits and respect for the needs of others, both now and in the future—to an organization that might normally skip that message in favor of the Boy Scouts' traditional focus on masculine self-determination. That makes this an important yet playful space, and one that's beautifully designed both architecturally and graphically." 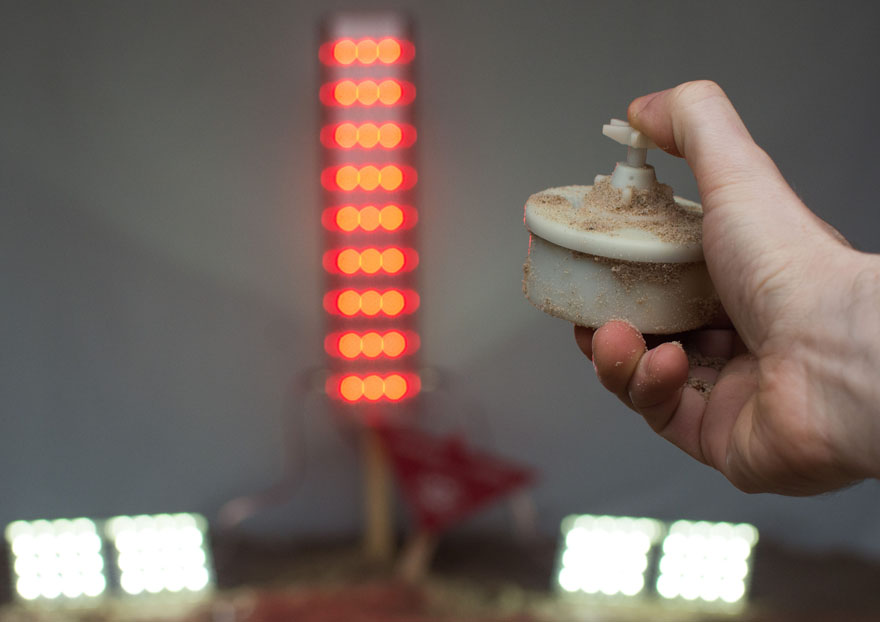 Student Winner: Blastproof: A Hands-on Exhibition about Humanitarian Mine Removal, by Chris Natt

Landmines are but a vicarious news item (or metaphor) for most of us, but they are a daily reality for residents of war-torn nations. Royal College of Art student Chris Natt brings us an interactive look into the daily lives of the people responsible for removing the weapons from conflict-affected areas. Throughout the exhibit, visitors can interact with electronic replicas of the devices and experience the visuals that go hand-in-hand with the explosives. "Fascinating R&D with a critical subtext: Reactive training tools that enhance the perception of mine hazards," says juror Hayley Eber. "The museum-based detonation triggers a range of auditory, visual and tactile stimuli to communicate the event. It would be great if the installation could find a permanent home, and the prototypes went beyond 3D printing." Fellow juror Jake Barton appreciates the attention to the sensitive material: "It's really, really hard to make something that horrific be both experiential, impactful, and also respectful. I think it's the right mix and a great achievement."

» Learn more about Blastproof: A Hands-on Exhibition about Humanitarian Mine Removal 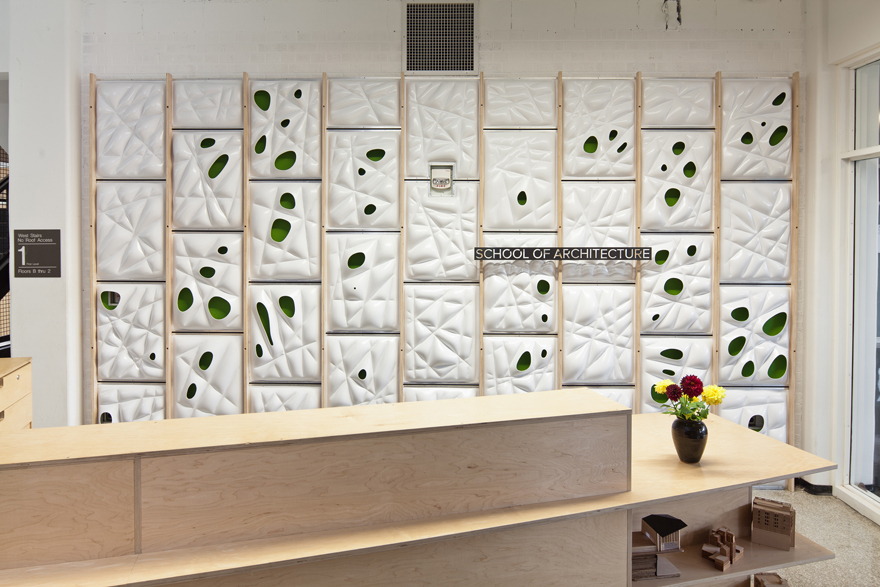 Professional Runner Up: Breaking the Mold—VarVac Wall, by HouMinn Practice

It goes unsaid that an architecture school has to be housed within a memorable structure. The University of Minnesota School of Architecture looked to HouMinn Practice to give them a front office worthy of a a few photo ops. The VarVac Wall works specifically with sound—some sections of the wall absorb it while others reflect noise. The ultra-textured surface is made of vacuum-formed panels that are either solid or perforated, depending on their function. "This strikingly realized tweaking of a relatively common manufacturing process shows at least one way for new architectural designs to be realized in the tooling and fabrication stage, where aesthetic results—and these wall panels are definitely gorgeous—emerge less from a designer's own palate and more from the materials themselves," says Manaugh. "On a technical level, as well, this system points toward intriguing future overlaps between the realization of architectural systems and the production of industrial products." 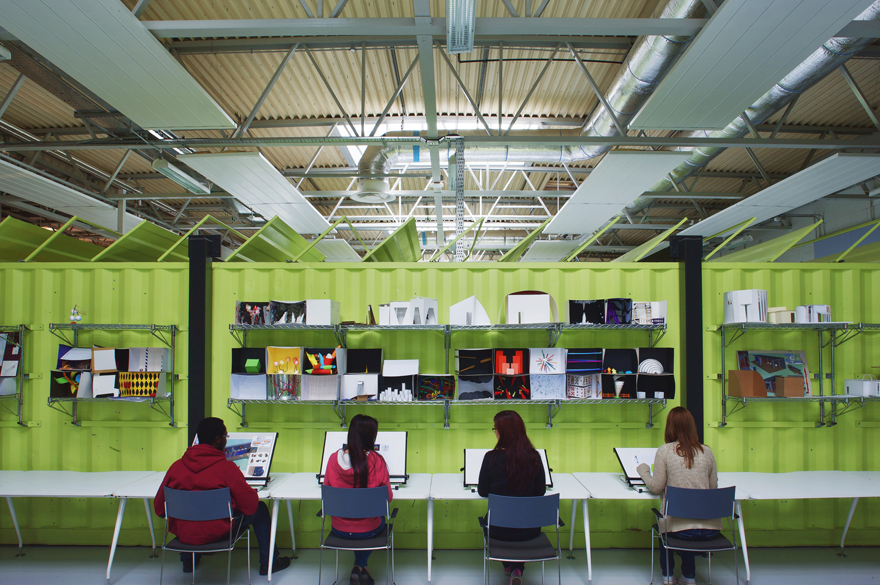 We live in a time where shipping containers are finding more applications—or at least more media exposure—as trendy space solutions beyond the shipping industry. Marc O'Riain of the Cork Institute of Technology (CIC) and Neil Tobin of RKD Architects have incorporated a series of containers into an open office space plan. Architecture Factory turns the CIC's Department of Architecture into a collaborative space despite the claustrophobic size constraints of a single shipping container. Jurors Yen Ha and Michi Yanagishita appreciated this contrast: "The project presents a different approach to shipping containers by using them not just as containers, but as walls and dividers of space. A great project that defines space without creating barriers, providing visual interest and continuity." 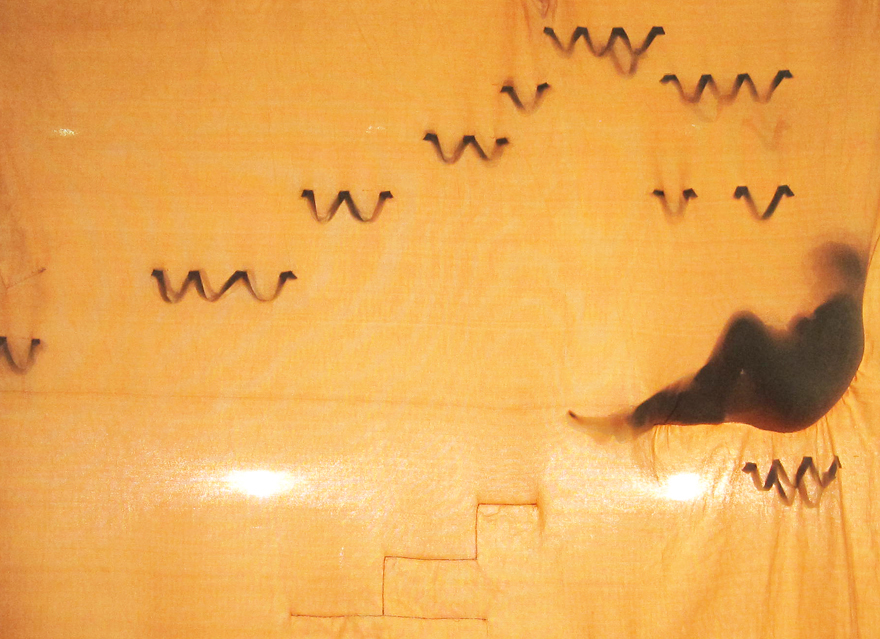 Our living spaces are becoming smaller, but at least our floorplans are keeping up with the trend and more creative ways to embrace (and use every inch of) the space we have are popping up. You won't want to make a permanent home out of Bezalel Academy of Arts and Design student Tanya Shukstelinsky's Cocoon, but it is an intriguing look at the way our public spaces define our personal territories. The structure is made of textiles sewn together to create stairs, sleeping areas and other living areas. The jury team had a few situational suggestions for this design: "the implications for things like tent design or portable camping shelters—let alone children's play rooms—are fascinating to consider," says Manaugh. Ha and Yanagishita had another idea: "Cocoon reduces the idea of what it means to be in a space to the bare minimum. Definitely the new hammock for start up tech offices." 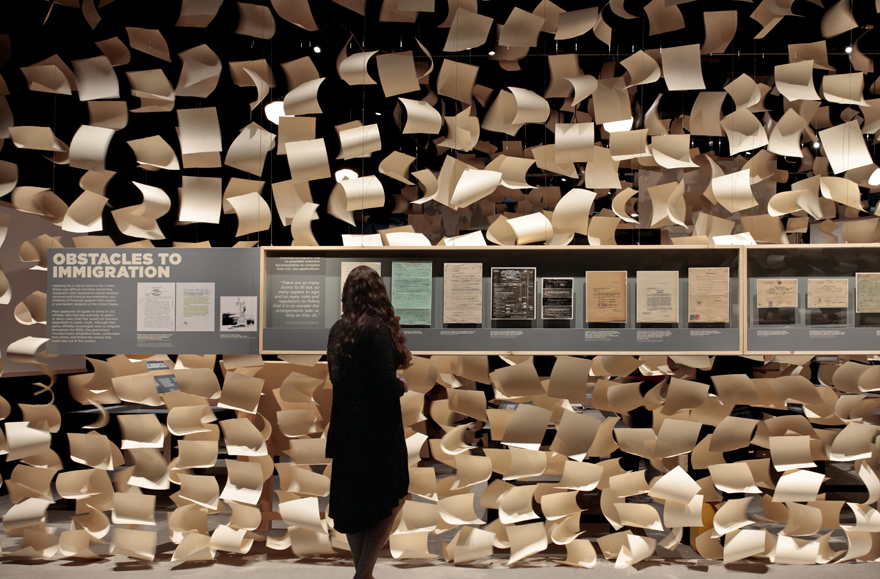 Professional Notable: Against The Odds: American Jews & The Rescue of Refugees 1933-1941, by C&G Partners

Reliving a tragic incident isn't easy for anyone, whether you were directly involved with the event or have only read about it in a textbook. C&G Partners's work for the Museum of Jewish Heritage, Against The Odds: American Jews & The Rescue of Refugees 1933-1941, is one of those delicate subjects. This exhibit shares the stories of Americans who overcame obstacles to help European Jews against the oppression of the Nazi regime. "A compelling and very smart use of a basic material—the cascades of paper that frame and divide this exhibition space—conjures a haunting atmosphere of rich and appropriate references for a museum of Jewish refugees: the difficulties of achieving political documentation, the lost and scattered pages of a history interrupted over the centuries by pogroms and violence, and the literate impulse and diasporic folktales so central to the 'People of the Book,'" says Manaugh. "A beautifully yet subtly realized exhibition." 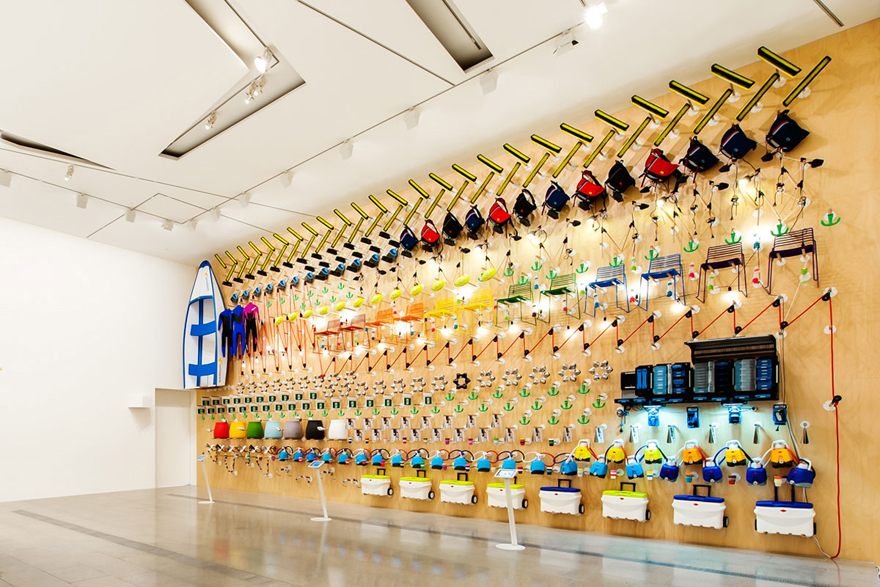 Turning 700 objects into a cohesive representation of Melbourne's design community isn't an easy task. The National Gallery of Victoria commissioned designer Carter LeAmon to create the Design Wall. which consists of 40 repeated objects designed by 21 local design studios. The installation gives locals and tourists alike a look into the area's contemporary design style of the moment. "The simple and environmentally-sound mounting system allows for open-ended curatorial narratives, with high visual impact," says Eber. "The scale and format of the wall installation challenges the didactic nature of the piece, which is then accompanied by a digital interface. The election process of objects is also carefully considered. And it looks great!" 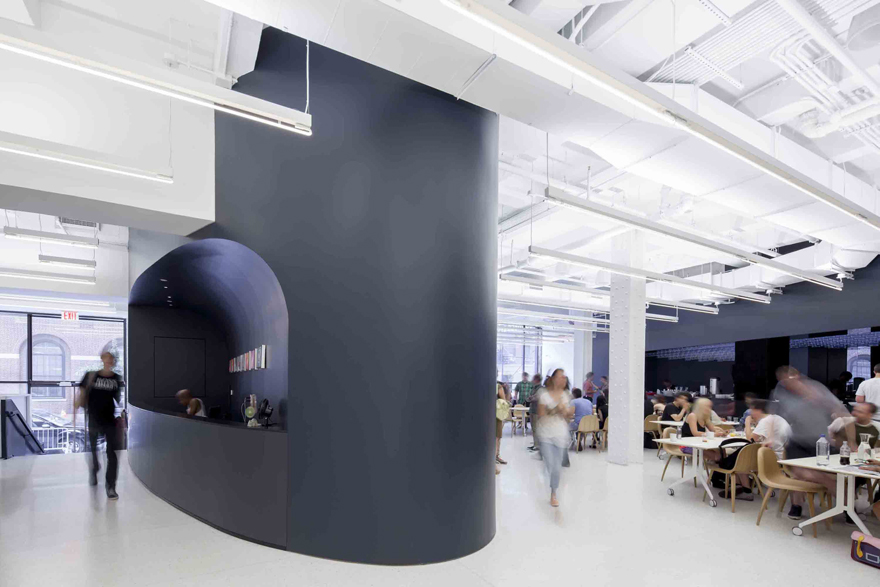 Red Bull has long championed athletes and artists on the cutting edge of their craft, and the newly opened Red Bull Music Academy fits right in with the brand's bold, youthful brand. INABA Inc. completely transformed the stereotypical classroom environment within the walls of the Red Bull Music Academy New York, complete with dramatic walls and lighting, to come together as the ultimate collaborative working space. Barton notes the space's ability to take interior design to the next level without going too far: "I like the variation in the learning spaces, and the right mix of over-the-top hip and actual function." 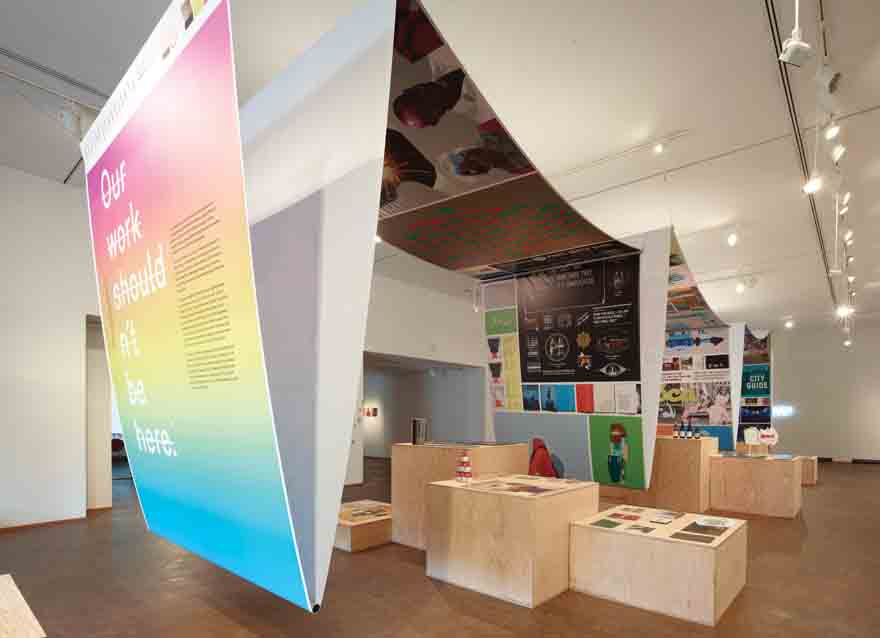 Volume Inc. took their retrospective exhibition at the Western Gallery at Western Washington University to new heights by turning their work into the very framework of the display. Masters of Design: Volume Inc. used the displayed designs—which were printed on banners and posters—to guide visitors from one piece of work to the next (with a few interactive elements thrown in for fun). "[It's] an ingenious way to make an intimate architectural space out of the exhibition content itself, suspending what would normally be wall-text as a colorful and playfully immersive canopy for gallery visitors," says Manaugh. 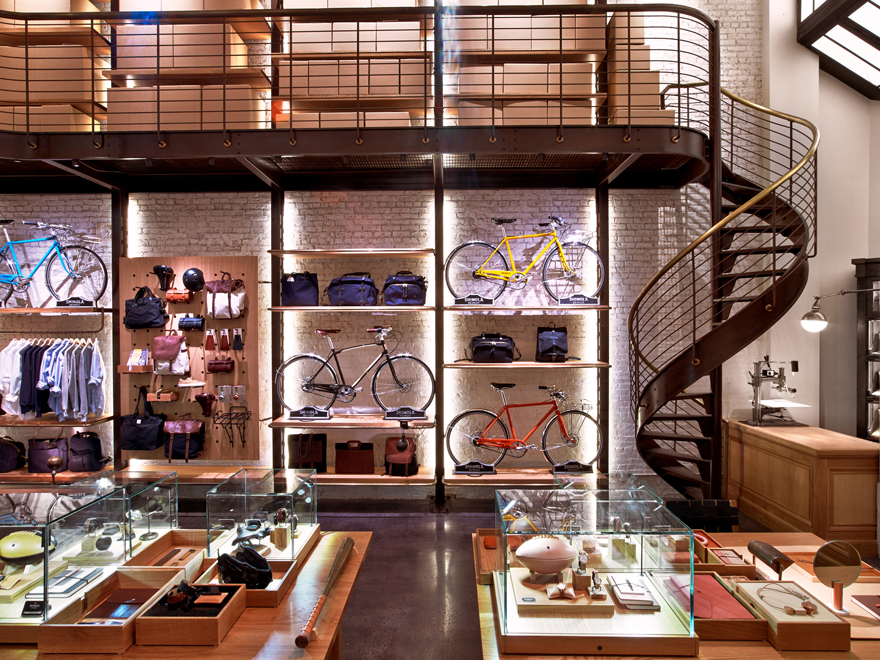 Shinola is well-known for their gorgeous American-made goods—wallets, leather products, journals, bikes—so the retail space that houses the best of their work has to be just as appealing. Rockwell Group took on the challenge and turned the flagship space into a two-story structure that includes the shop and a café on the first floor, complemented by a showroom and storage space on the second story. "This bare bones but fundamental rethinking of what a bike shop should be results in a space that could easily be mistaken for a museum or art gallery," says Manaugh. "It looks less like a space of retail exchange than a quiet and pretty beautifully realized room dedicated to the future of personal transportation." 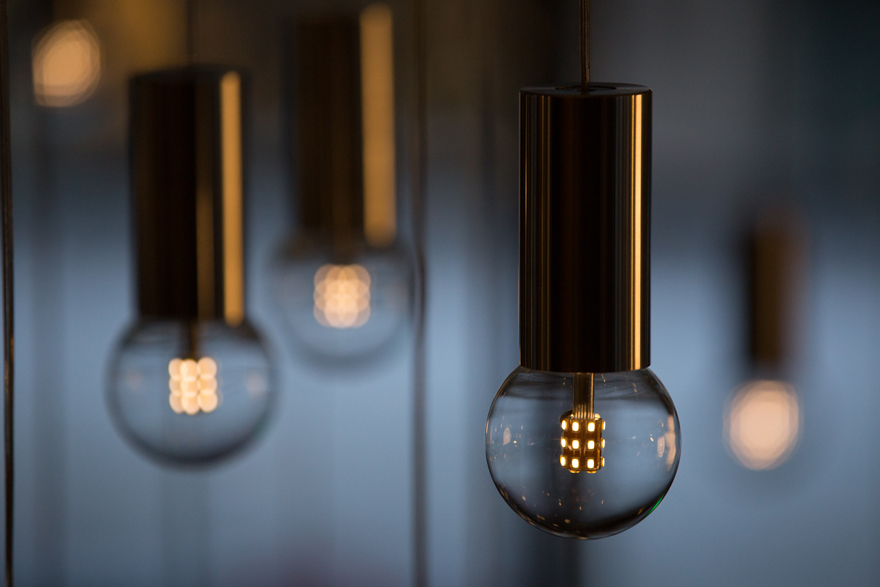 The Edison bulb is a work of art on its own, but pair it with 99 others and we've got a site worth seeing. "Edison" is an interactive light installation located in The Epiphany Hotel (a Joie de Vivre property) in Palo Alto, California. IDEO created the 10×10 foot installation, which spans the hotel's two-story mezzanine area, from the floor to ceiling. The bulbs' brightness and vertical position can be individually controlled and the sculpture as a whole pulls code that visualizes various data points, including crowd-sourced code the surrounding area. "The technological aspects of coordinating of this piece we found astounding," says Ha and Yanagishita. "We liked the multiple layers of meaning behind the bulbs, the design and the effect that it is designed as an open-source installation."

Professional Notable: The Binoculars, by Tellart and Google Creative Lab

Also recognized in the Interaction Design category, the Binoculars at the Sydney Opera House, are an excellent example of exhibition design as well. Developed by Tellart and Google Creative Lab, the interface offers glimpses of well-known landmarks from around the globe via hi-res, 360° scenes, thanks to Google Street View. "These street-mounted tourist binoculars act as long-distance periscopes for looking at landscapes and geographic landmarks halfway around the world," says Manaugh. "It's a great, collaborative combination of technology, pop-up exhibition, and everyday tourist draw."

» Learn more about The Binoculars