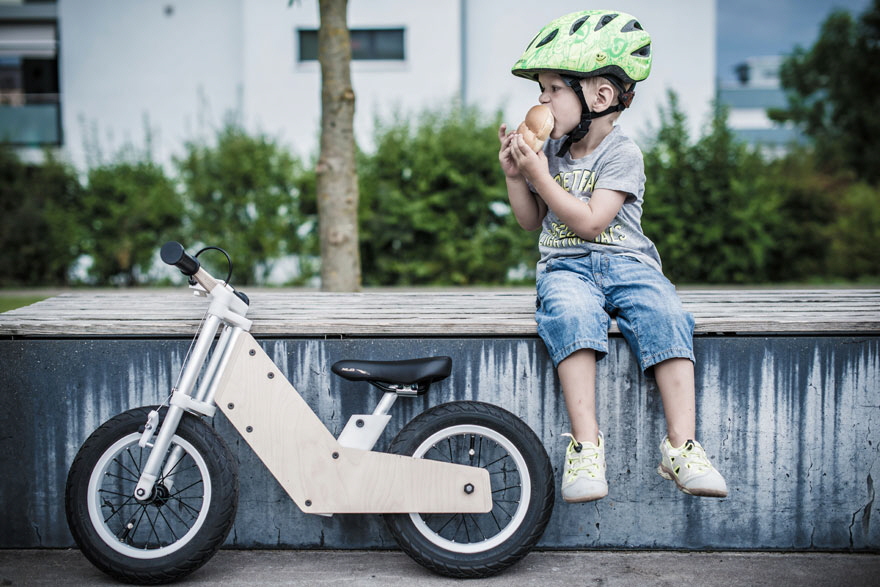 Amid all the flashy concept bikes up for consideration during the Bike Design Project, this little guy managed to catch our eye last week. Miilo is a balance bicycle for kids around 2 or 3, designed to grow as fast as they do. The slick flippable frame was designed by Andreas Bhend, who has previously gotten our attention with his IKEA hacks and another adorable bike idea.

Like those other projects, he's working in well-traveled territory but manages to bring a few elegant little moves to the subject that make even this hardened bike heart skip a beat. To start, this isn't just another pedal-free bike for tiny bumbling humans. Balance bikes in general are a great start for kids. In my humble opinion, they're entirely better for getting a tot cycling than transitioning onto and then off of training wheels, because they teach internal balance and mechanical control at low speeds and without building reliance on an awkward crutch. Many balance bikes now take rapid child size change into account, and come with a main frame that starts low and can later be reversed for a higher riding position. Miilo offers that feature in a shape that does a good job at maximizing the difference between low and high.

Going a couple steps further, once flipped the Miilo allows you to add a crankset and chain with a bolted on sleeved insert, turning the balance bike into a... bike. That simple costume change is the clincher. That said, another favorite feature is the sturdy and extendable double front end, which (unlike some designs) uses lightweight aluminum in a well-reinforced and small user-appropriate design. While it mimics larger mountain bike forks in a kind of adorable way, it also dramatically increases the height of the front end without making handle like a floppy nightmare. Also charming: the totally useful yet rarely seen front brake. Turns out kids like to stop too. They also really like going fast, so you ought to at least give them the tools to manage their bad ideas. You'd need a longer brake cable in order to extend the handlebars, but I hear you can get those without too much hassle at a "bike shop." Meanwhile, you could get about three bikes' worth of riding without forcing a kid onto something that doesn't fit. Fun!