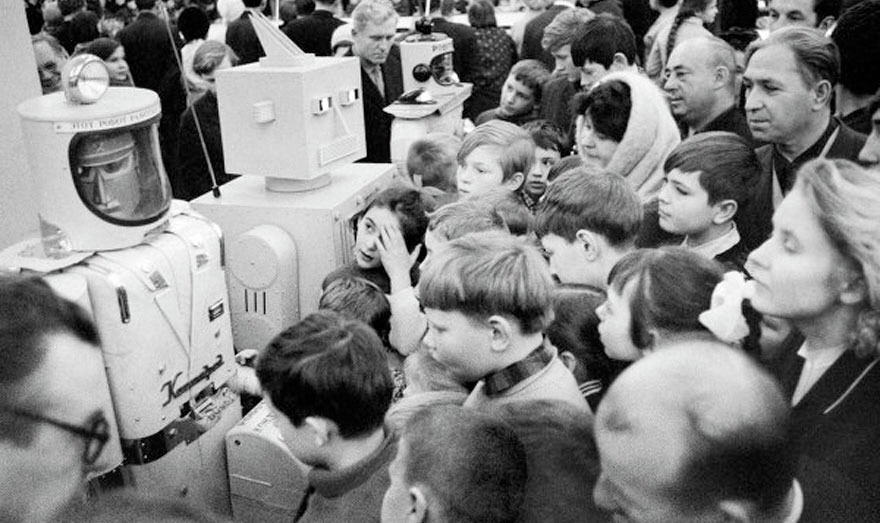 Integration of robots into our daily lives is growing, and fast. Siri's stilted guidance is no longer surprising, your toothbrush can track your behavior via bluetooth and there are virtually no tasks left without an according app. Though the recent Turing Test dust-up was mostly hot air, it highlighted the world's continued fascination with artificial intelligence and proved that we have come a long way towards their eventual uprising.

Questions about quantifying digital intelligence and the ethical boundaries about sentience are being left to specialists, while the rest of us discuss how adorable a robot needs to be before we become emotionally attached to it. We're still pre-Jetsons and a reasonable stretch from I, Robot, but accessible technology and information are bringing robots into new niches all the time. Automation and smart technology barrel on behind factory doors and inside our phones, but we're most interested in how robots serve—or seem like—us. Fortunately charismatic digital dudes abound. Here's a handful of our favorite recent robotic friends and trends.

Newscasters are are a stiff and inhuman breed, as close to pod-people as you can get on live TV, so it's understandable that robots would look up to them. As per usual, we have Japanese developers to thank for some of the profoundly weird members of the robotic working class. These beautiful super-humanoid ladies are cool and collected enough to crack a hard interviewee, and even crack jokes when they flub a line or get a glitch. Maybe a justification for the cold voice, immobile hair and plastic smile would help viewers relate.

Does your baseball team suck so much there's no reason for you to show up? Even if they haven't won anything in years, a true fan can't let the home team play to empty seats. Rather than conspicuously miss the game, fans of South Korea's Hanwha Eagles can rest assured that their share of cheering, chanting and crying is being handled with calculated aplomb. The Hanwha Fanbot is a robotic stand-in that holds your spot, and also holds forth with the required hollering, even if you're out on the road. Upload your own face and stream along at home so that, at least virtually, you can bear witness to yet another boring slaughter.

We've been promised motherly cleaning bots for generations, but only recently has the at-home robot trope transitioned from eerily subservient domestic helper to a desktop assistant. Jibo wants to help you stream video with distant family, while also recalling that delightful recipe and managing your texts and emails, all while plopped firmly on your counter. Finally, a solution to the odd-man-out family picture scenario! Bonus, Jibo looks like it was designed by the Totally Heartwarming Robot Department at Pixar.

In case that was all too practical and approachable, here's a terrifying robotic nose and throat for good measure: