Bike Cult Show 2014: Bryan Hollingsworth of Royal H Cycles on Saying "Yes" to Clients, the Decline of the Fixed-Gear and Much More 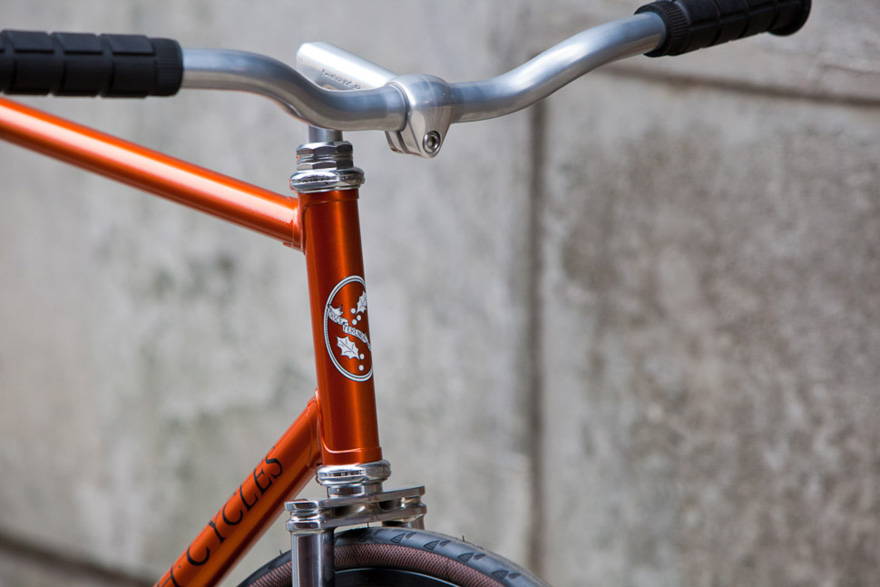 Once again, Core77 is pleased to be the media partner for the Bike Cult Show, which will once again bring the very best custom framebuilders in the Northeast region to New York City this month. Set to take place on August 16–17 at the Knockdown Center in Queens, the second annual Bike Cult Show promises be bigger and better than before. In anticipation of the event, Bryan Hollingsworth of Royal H Cycles shared his story.

I grew up riding on the beautiful roads of northwestern New Jersey. No one believes me when I tell them this, but it's true. My first bike-related memories involve riding up and down our dirt road on an old Raleigh Rampar coaster-brake-equipped "BMX" bike. I wasn't a daredevil, though, so I was happy when I upgraded to another hand-me-down, my mom's 10 speed Super Grand Prix, so I could focus on getting places. I definitely inherited my love of bikes from my family—I did my first century with my parents and uncle on my 14th birthday, and my mom and sister have biked cross-country. Barring a brief lapse from riding after I got my driver's license, I've been riding with my family for as long as I can remember.

I studied to be an engineer, but had a hard time finding the right job. The pay was good, but the work was divorced from practical applications and [the results were] anything but beautiful. I saw an ad for the United Bicycle Institute and put it together that perhaps it was possible to build the machines I'd found so beautiful my whole life. I kind of assumed that bikes were either built by ancient Italian men or made in factories overseas up until that point, and though it seems obvious now, it opened my eyes to a lot of custom American builders who were doing interesting things with steel. It was a bit of a risk, but I enrolled and headed out to Oregon.

Long story short, I loved the course, crashed my car and decided to go car-free, gave up eating animal products after long talks in the dorms with Jordan Hufnagel (we were in the same UBI class, along with Taylor Sizemore), and came back changed and ready to live the bike-building lifestyle. I was an outsider to the industry though, so I applied incessantly to Independent Fabrications and Seven Cycles, and ended up landing a job at the latter. 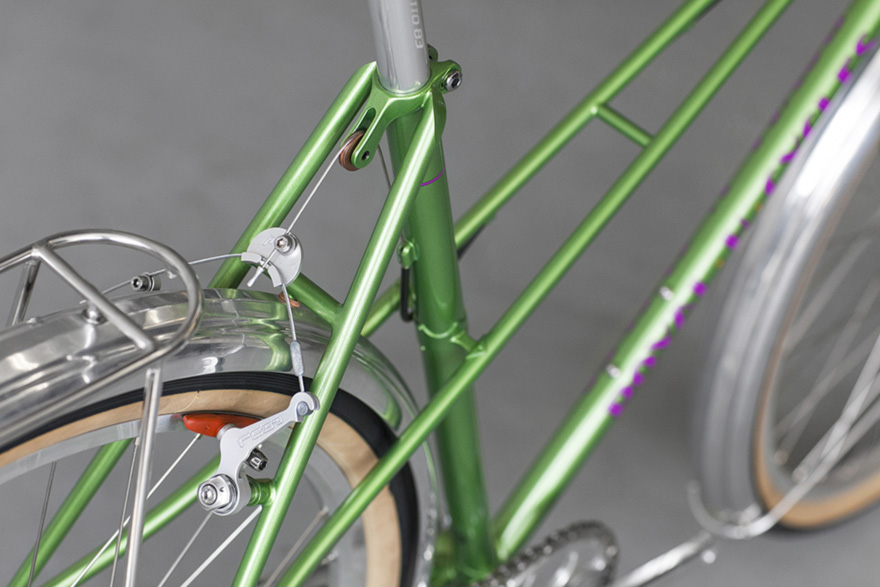 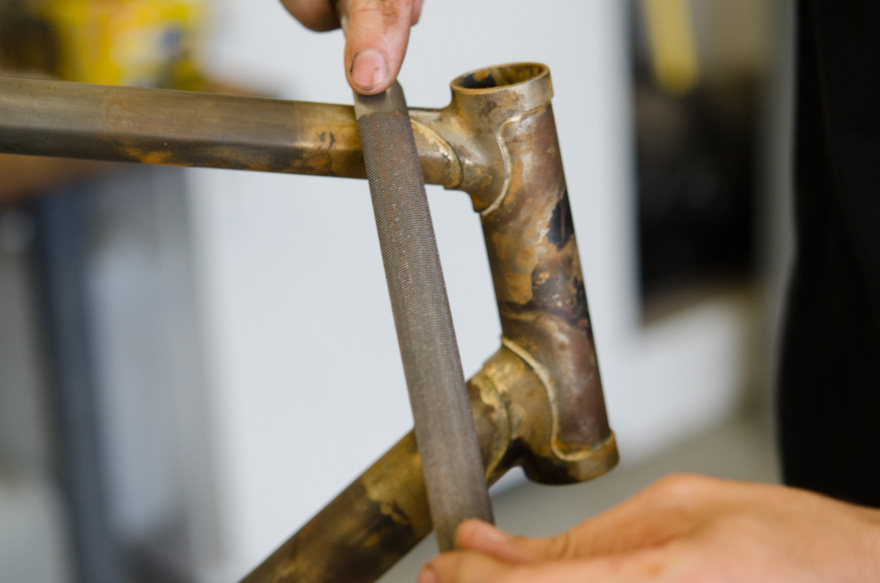 What was supposed to be a brief segue to my own company turned out to be an eight-year tenure. Seven opened a lot of doors and definitely introduced me to almost everyone in the Boston building scene, and was an amazing place to work with a great team on the production floor and in the office. I talked it over with Rob, the owner, and he said I could stay on part time after starting Royal H Cycles, which definitely made the financial side of the startup easier. At Seven, I met Marty Walsh of Geekhouse, and we immediately became good friends. I took a corner of his shop for my first frames, along with Ian Sutton of Icarus, who also worked at Seven. It was three young builders in a shed in Lower Alston, and some of the best evenings of my life. From there, Ian and I moved into a shop in Somerville together and turned out some great bikes. Now he's moved to Texas, and I'm back in Marty's shop in Boston. (Something about working near other builders, I guess.)

It's been five years now and I haven't had a boring day yet! I also don't think I've ever had two days that resembled each other in any way. As a sole proprietor, you're doing everything, so it's hard to get burned out on any one aspect. You can file lugs for a whole day and then spend the next sending emails and following up on leads in the office without even getting onto the floor. All aspects of the business are important, so it's hard to get bored I think. A continual challenge I apply to each frame is efficiency—building quicker, more accurately, and with less clean up. The better the machining and brazing, the faster the frames finish up, and each one is a challenge in that regard.

Another constant challenge for the steel builder is keeping up with the industry—making bikes that accept the rapidly changing parts market. Many of the off-road bikes I've built this year incorporate tapered steerer tube carbon forks, and getting that to look nice on a lugged or fillet-brazed frame has been a fun challenge. 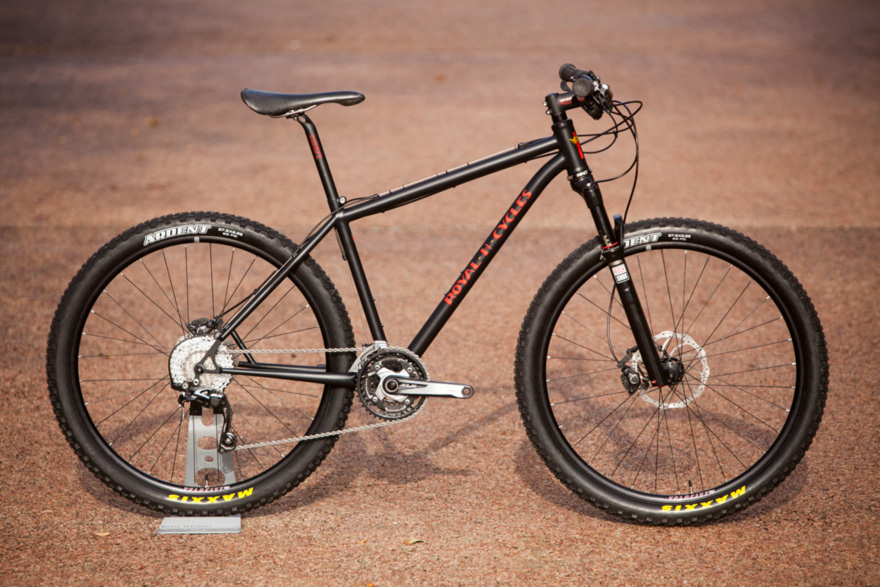 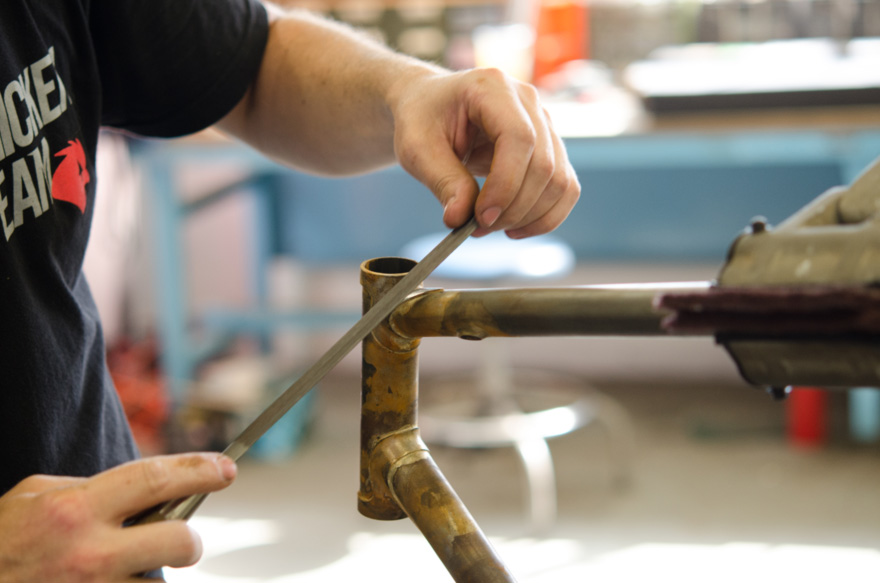 I'd always loved steel bikes, but with the introduction of aluminum and carbon fiber to the racing world, the evolution of the steel bike was somewhat stifled. Those newer materials have their place on the race course, but I'm inspired by the builders who were pushing steel in new directions in the 80's and 90's, and look to pick up where they left off. Garish graphics notwithstanding, Zunow bikes are incredibly unique. Of course, it's hard for a lugged builder to not be influenced by the Italians, and Cinelli and Rossin are some of the best examples of creative approaches to framebuilding. I look to the American masters as well: Richard Sachs for refinement of technique, and Bruce Gordon for some of the best-looking lug cutouts.

Similarly (and again as a sole proprietor), I deal with clients for the entire process. A lot of my lowest points come after saying "yes" where perhaps I shouldn't have. In the end, though, despite taking on more work than I had anticipated, the demanding clients push me towards better frames. For example, I recently completed a fully chromed randonneuring bike for which the customer really wanted something that looked like it was from another era, and supplied a lot of the vintage components for the build. It required a history lesson in bike components on my part—many hours on the internet and studying old Rebour drawings to try to piece together how these old parts mounted to the frame. The end result was amazing though. It looks so authentic I've come across pictures of the bike online and not recognized it.

The most obvious change in the custom market since 2006 has been a decline in the popularity of the fixed gear. Which is sad for a framebuilder, as the uncluttered nature of the frame really puts a focus on the frame construction and joints. I guess everyone collectively remembered how awesome it is to coast on downhills. The first two bikes I built were track bikes, and they still see action from time to time. The hot bikes now are definitely randonneuring and cyclocross bikes, which are excellent choices for a custom bike, as they are tremendously versatile—with a change of tires they can be either off-road machines or basically road bikes.

The number of custom builders has also definitely increased. Some have come and gone, a testament to how hard it is to make a living doing this. I'm of the opinion that most small builders have very distinct aesthetics and specialties, so I think the general growth of the industry raises awareness for the custom world and is good for everyone—the rising tide raises all ships. I definitely get fewer shocked looks at shows when I explain my pricing! 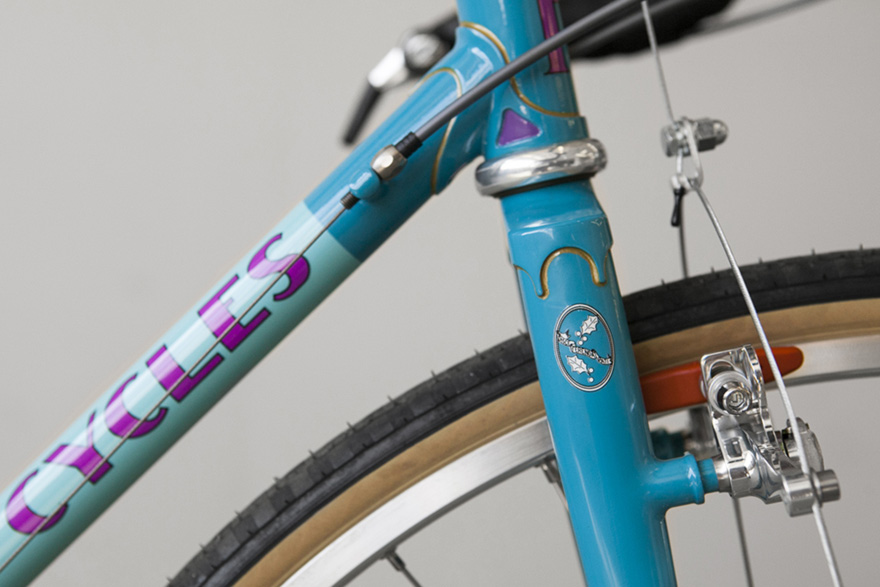 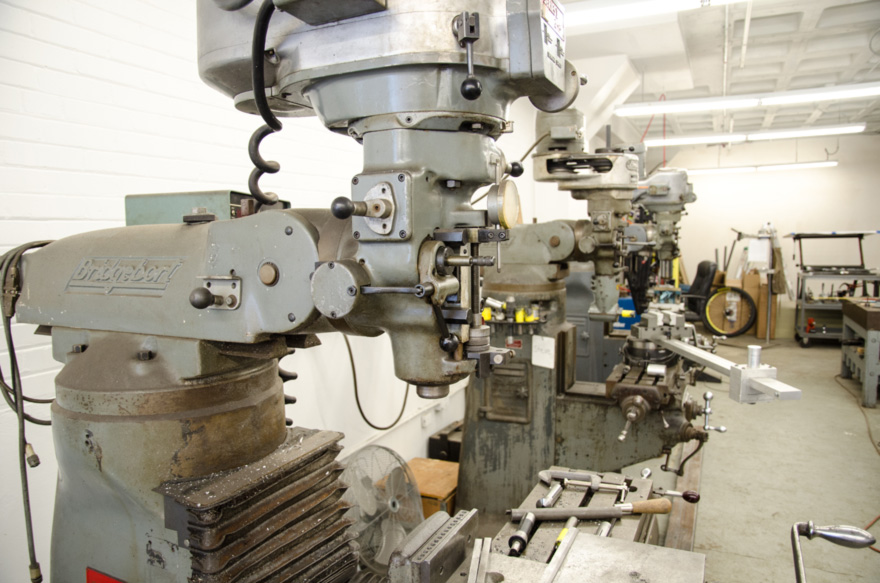 Outside of the bike world, one of the biggest inspirations from me has been wood furniture. It's another thing that runs in the family: My grandfather was an amazing furniture builder who has built countless pieces. I didn't get the woodworking bug—my sister and uncle fall into that camp—but the attention to detail is undeniable. The difference between a good piece and an exceptional one, whether it's a bike, furniture or otherwise, is in the finishing. He's definitely been inspirational in that respect, even if the design elements of colonial furniture don't shine through on Royal H frames.

One of the biggest things I've learned about framebuilding is how little framebuilding actually goes on! At first, I would rush through everything to get to the brazing—the best part, I thought! Now I have a better understanding of how important proper setup and machining is. Do that right, and the finish work is easier as well. It's easy to put off the other no fun aspects of running a business—taxes, following up on leads, marketing, advertising, etc.—but they're all essential. The real lesson, though, has been to be flexible and keep your head on a swivel. You never know where that next sale is coming from. I'm continually surprised by that! I guess that's pretty universal, framebuilder or not! 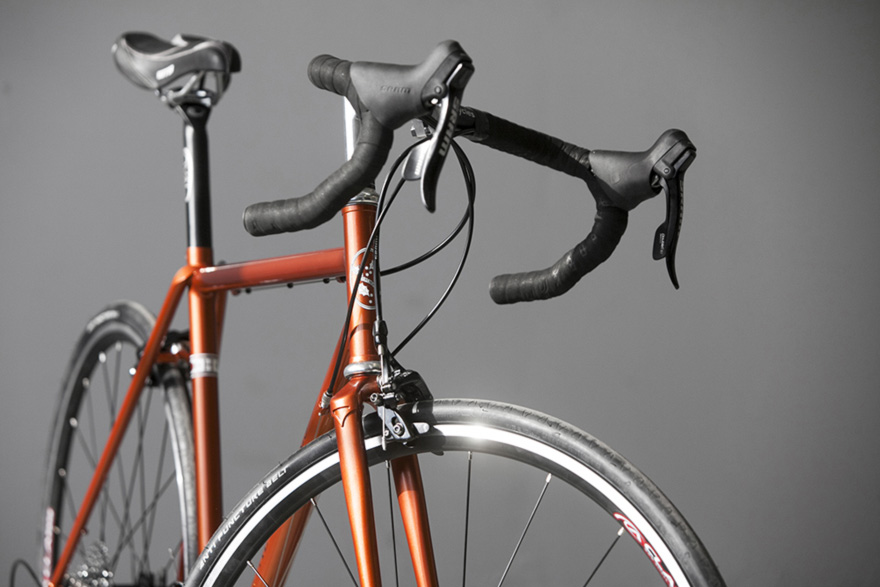 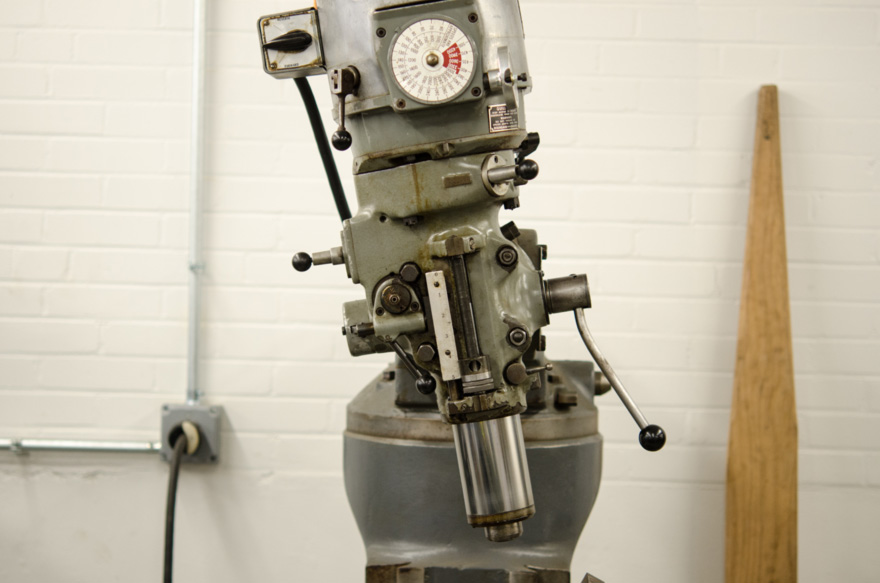 Check out the Royal H Cycles booth at the Bike Cult Show, August 16–17 at the Knockdown Center in Queens!

Bike Cult Show 2014: Bryan Hollingsworth of Royal H Cycles on Saying "Yes" to Clients, the Decline of the Fixed-Gear and Much More