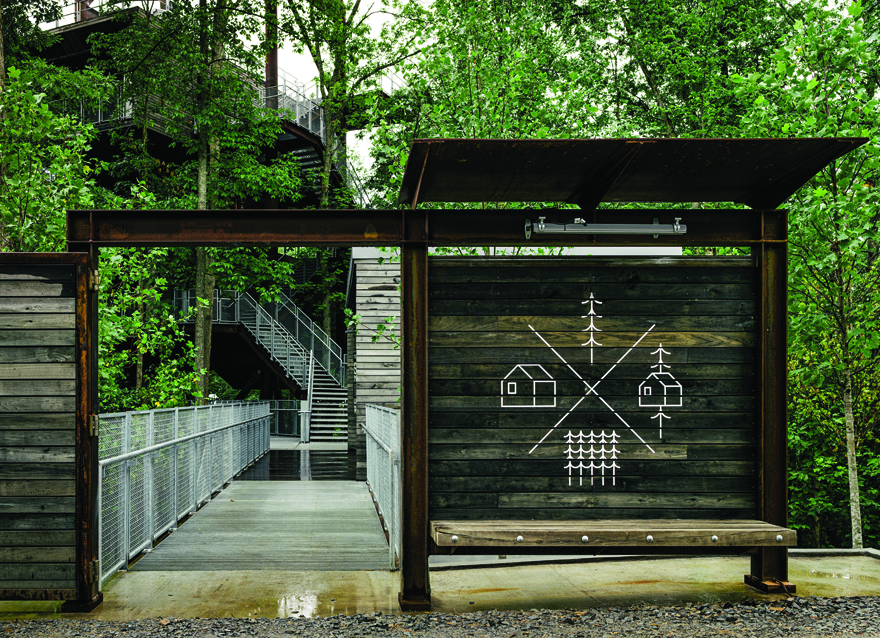 When you think about the Boy Scouts, activities like canoeing, fire-making and nature-inspired survival hacks are more likely to come to mind than an interactive gallery space on living sustainably. But the latter is as much in keeping with the organization's mission to "combine educational activities and lifelong values with fun." Thus, Volume teamed up with Studio Terpeluk to create the Sustainability Treehouse, an exhibition that shares a story of sustainability through the very way the treehouse runs—the structure is powered by wind and solar energy; rain-capture provides the water supply; and the building's waste is recycled.

"There were a lot of moving parts with this project that required many collaborators," says the Volume team. "There were architects, builders, content developers, writers and filmmakers on the project in addition to our core design team. Organization and quality control were key. Ironically, the creative process—at least in terms of client approval and such—was surprisingly smooth. They were enthusiastic about our proposed solutions from the get-go." 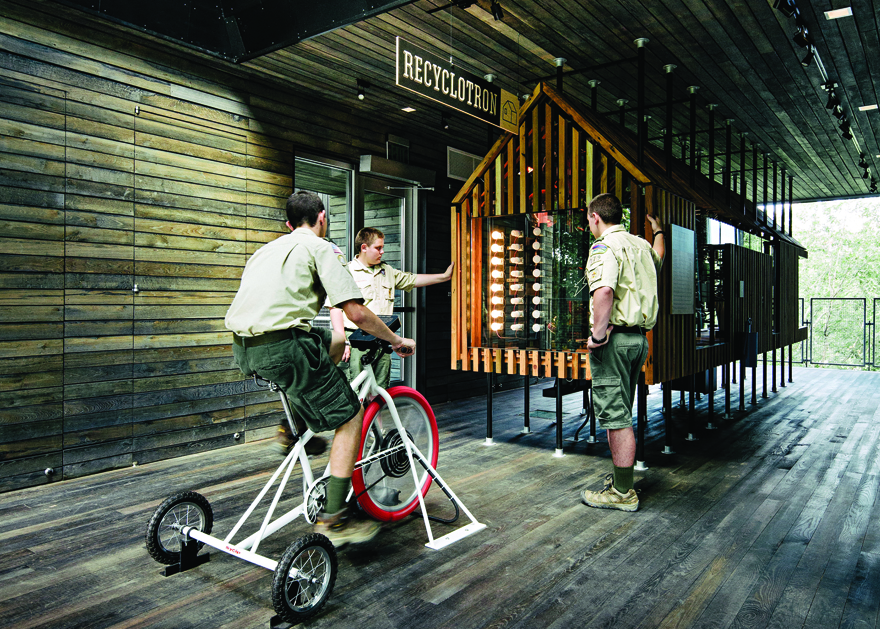 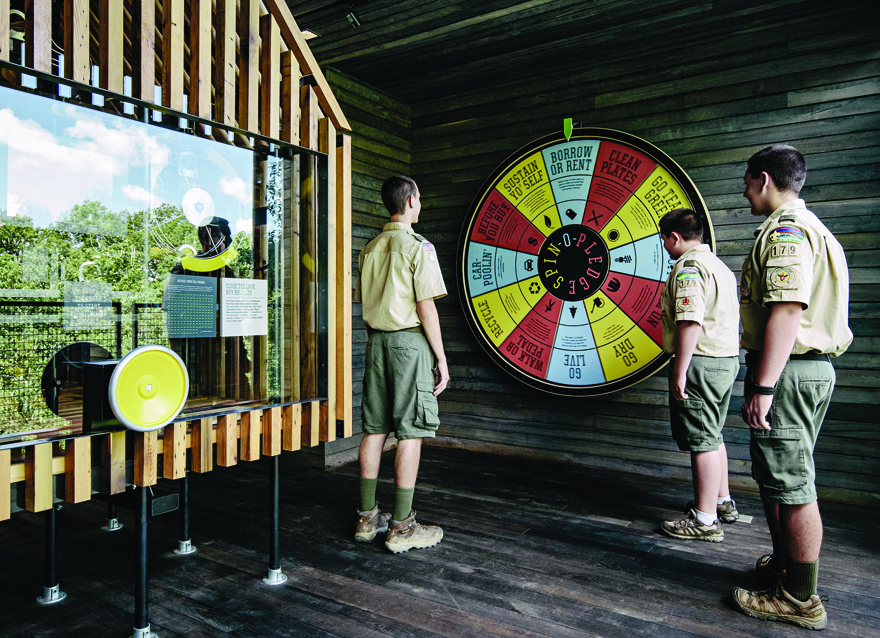 The treehouse is located at a magical place called the Summit, an adventure center that spans 10,000 acres and hosts practically any outdoor activity you can imagine (whitewater rafting, zip lining, skating, biking, climbing) for millions of people involved in the Boy Scouts. Taking in the site for the first time turned out to be one of the biggest surprises the project had to offer:

I can tell you about our first time visiting the site which is very remotely located in the hills of West Virginia. Flying in low over these hills we were surprised to see that in fact the mountain tops had been removed. This made us feel better about the mission of the Scouts to provide a new economic model that would restore the land here and provide other opportunities to the local community. Anyway, the second surprise involved the size of the site itself—they basically were building a city including all the infrastructure needed (if I could count the number of time I got lost on the dirt roads throughout the site that were rerouted on every visit...). We were first told that if you see one of the massive tractors or dump trucks coming pull over and get out of their way since they can't see you—we heeded this advice as the wheels on these things were over 6 feet in diameter.

The finished product incorporates a theater area for screening short films, interactive activities for visitors (including a rad lesson in energy from the bike-enabled Recyclotron) and walls bedecked with factoids throughout. Despite the wide perception of the Boy Scouts as somewhat traditional or staid, the Sustainability Treehouse presents information in a refreshing way, and the exhibition literature is said to be downright funny at times. Here's a peek at one element of the exhibition in action: 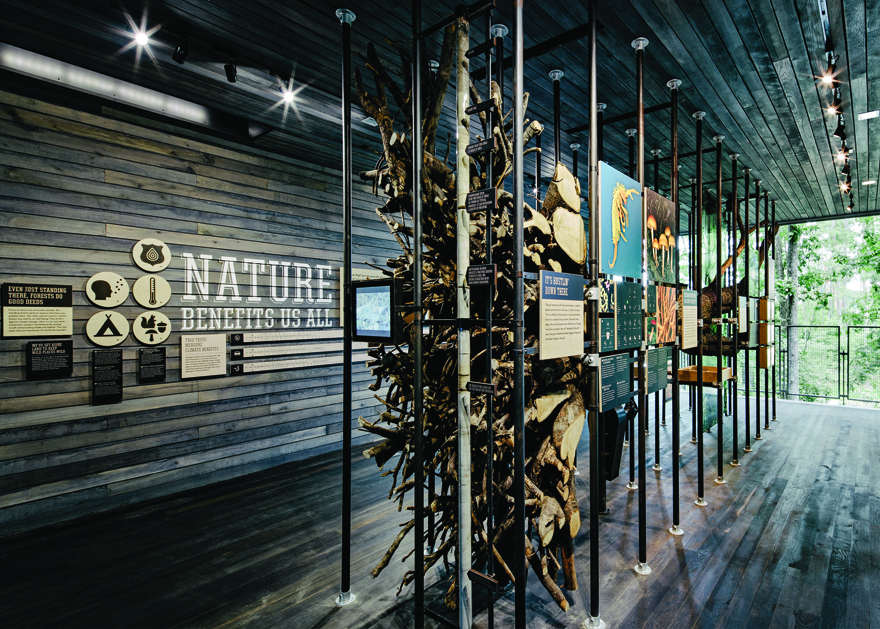 Not only did they exercise painstaking attention to detail in planning the treehouse, but the design teams braved poison ivy and Lyme-transmitting ticks to ensure that it was perfect down to its very last elements.

On the first visit we'd already planned an exhibit to suspend a tree horizontally and use it as a model for how our buildings could function in a more self-sufficient way (like a tree). We we aware of several stands of trees on the site that were slated for removal—note that none are "heritage" trees as most of these had been removed by the 1920s. As designers, of course we weren't going to select just any tree. What species would look the best? What should the texture of the bark feel like and will it remain tight enough as the specimen dries out so that it doesn't fall off? Will it fit into the room and how do the branches look? Could we even get into to remove the tree with its roots intact?

This process ended up with us hiking the entire 16 sq. mile site with a forester all day (who partly enjoyed this unusual day of work and partly thought we were insane) looking for just the right specimen while deciding the requirements as we went. After selecting a tree we'd have to wait six months before cutting to make sure the bark was stable. Then came the task of trying to accurately measure the tree and its features so that we could decide how to outfit it with the exhibits we'd planned (a 3D scan was out of the question). Finally, there was the delicate preparation and preservation of the tree. We only had one so there was no margin for error. The complexities of this seemingly simple idea continued until the final installation where it was carefully craned into a small opening 50 feet off the ground. Nothing is easy as the saying goes. 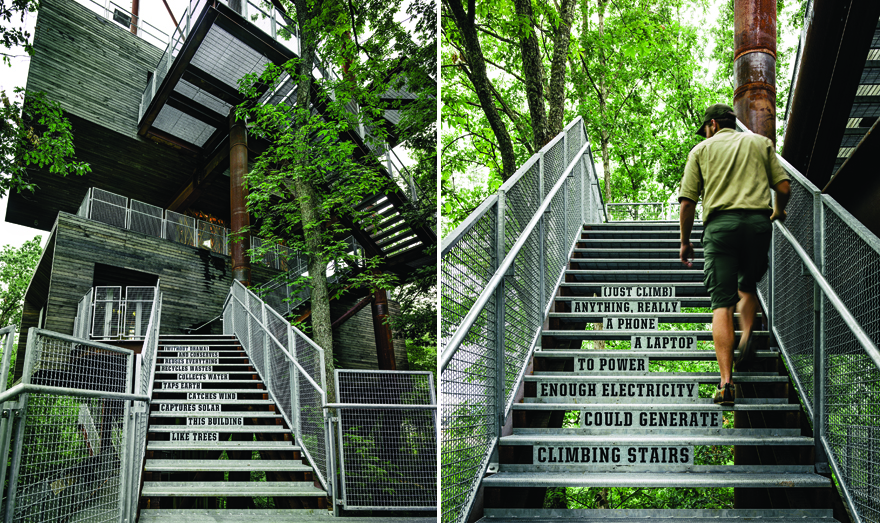 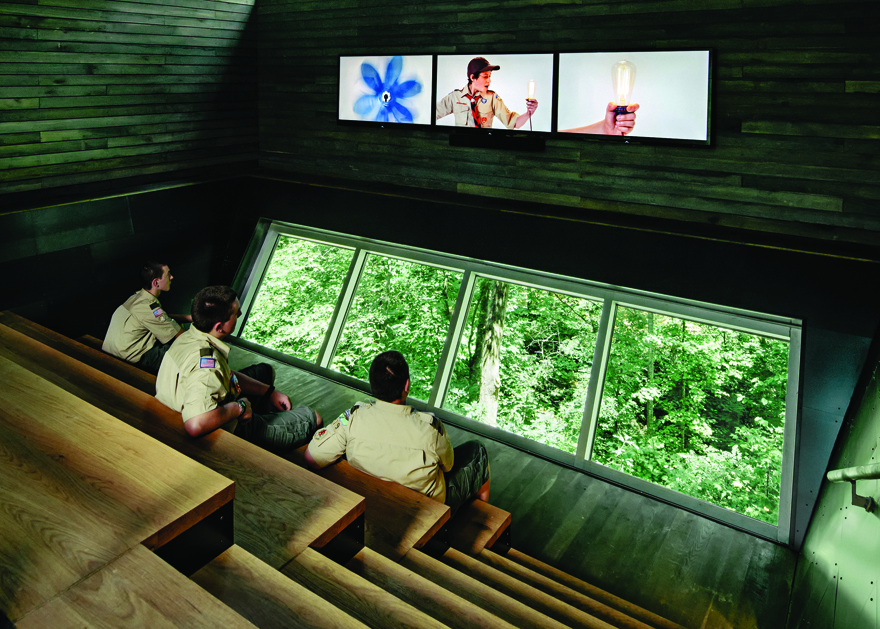 The treehouse has been well-received by visitors and design aficionados alike, including the Interiors & Exhibitions jury team of the Core77 Design Awards, who saw fit to name the Sustainability Treehouse as this year's Professional Winner. But the project's biggest fan is a little, um, unexpected. "There was Chuckles, the 3-legged bear, who ate 10 honey-baked hams at a donor event while everyone was out touring the site—but that's a story for another time." 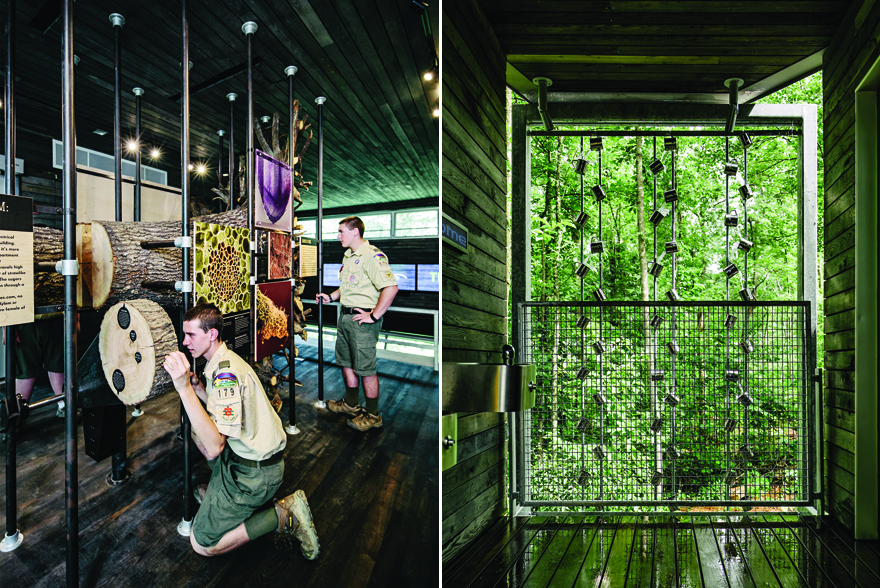