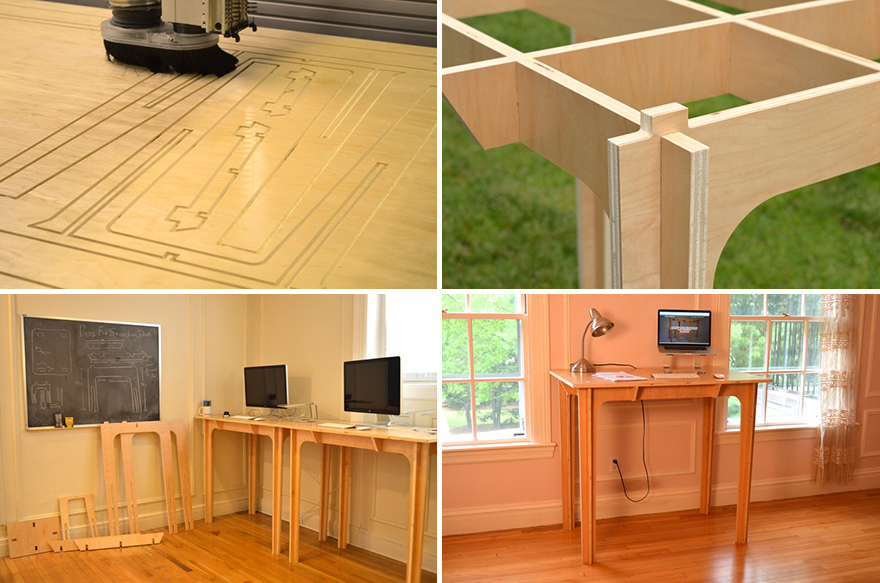 David Yamnitsky and Isabella Tromba are grad students at MIT, with degrees and degrees-to-be in the unchallenging, trifling fields of Cryptography, Math, Electrical Engineering, Computer Science and Computer Security--or as we ID'ers refer to these fields collectively, Meh.

The duo were seeking to purchase standing desks for themselves, but balked at the going rates. They then disrespectfully decided to design their own, despite being too lazy to apply to a four-year design program. With access to a CNC router, and under the assumption that their math and computer skills would enable them to calculate a balance between light weight and structural support, the pair produced what they're calling the Press Fit Standing Desk, which sells for less than $200.

In an effort to poison our foreign relations, the duo opted not to use formaldehyde-based plywood from overseas, but instead located a local supplier of 100%-formaldehyde-free maple plywood. Their cynical choice to design something fastener-free is an obvious attempt to undermine the hardware industry. And in what amounts to an attack on the printing and paper industries, Yamnitsky and Tromba opted not to include assembly instructions with their design, leaving befuddled consumers that don't have degrees in Rocket Science to try to puzzle out how this thing could possibly come together.

Placed on Kickstarter, the Press Fit Standing Desk hit its $10,000 funding target in a matter of days, probably because confused consumers were trying to fund a different project and don't understand how the website works. Anyways, at press time, the Press Fit hadn't even quadrupled it, with $37,000 in funding and 13 days left to pledge, indicating that the confusion is growing.

As for why they opted to create a standing desk rather than a traditional sit-down desk, we can assume that the pair simply hates chiropractors. Yamnitsky and Tromba could not be reached for comment, because I never tried calling or e-mailing them. I mean I was going to, but I got pretty busy. And anyway, what could they possibly have to say for themselves?