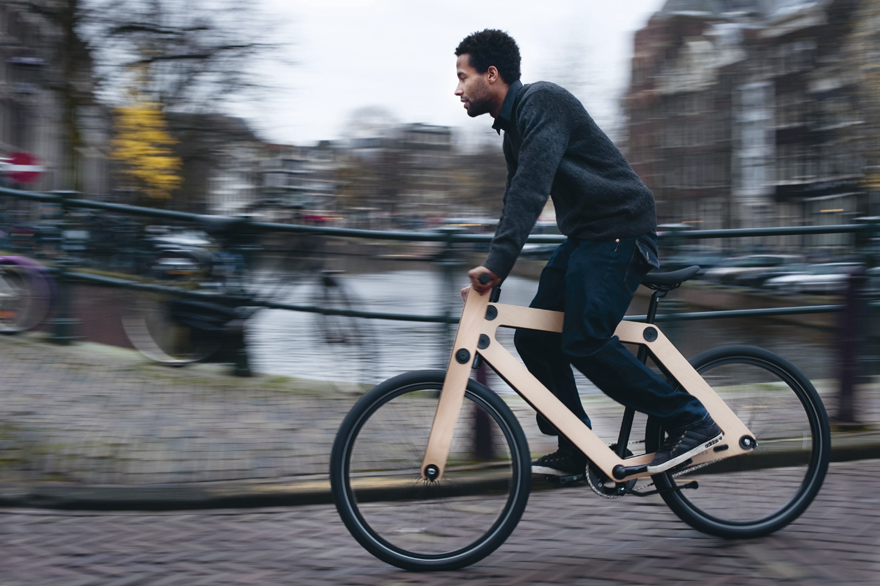 Flat-packing has spread its proverbial wings and flown to all corners of the globe, thanks largely to a certain Swedish furniture company. It's said that Erie J. Sauder invented flat-packed furniture in 1951, but it wasn't until 1956, when draftsman Gillis Lundgren faced a transportation dilemma, that the method really took off. Legend has it, Lundgren needed to fit a table into his car so, of course, he unscrewed the legs and put the table back together at home. The really lucky part for design connoisseurs around the world? Lundgren was an employee at IKEA. And so the flat-packed IKEA furniture we all know and love was born.

In the same spirit, Sandwichbikes arrive at your door ready to be assembled. With a few basic tools, Basten Leijh's bike design is ready to ride. As simple as the assembly may be, there's a lot of history and trial-and-error innovation behind the Professional Winner in the Transportation category of the 2014 Core77 Design Awards.

But putting the pieces together isn't just a means to an end, according to the design team: "The Sandwichbike doesn't just provide sustainable materials it also encourage sustainable use. We believe that when something is build with care ensures handle with care as well. Every step in the manual doesn't just bring you one step closer to your own Sandwichbike. Your commitment and appreciation for the design and quality will grow every step as well."

The Sandwichbike concept began in 2006 at a bicycle design competition in Taiwan. Bleijh Industrial Design Studio wanted to examine material use, manufacturing and distribution in bike designs with their entry. "Bleijh designed a bike made out of two wooden plates," says the design team. "Apart from the obvious advantages flat packing has for shipment, the use of two wooden plates gives freedom of printing and cutting techniques, making it possible to give each bicycle its own unique identity." Turns out everyone else loved the design as much as Bleijh did—the bike took fifth place in the competition. 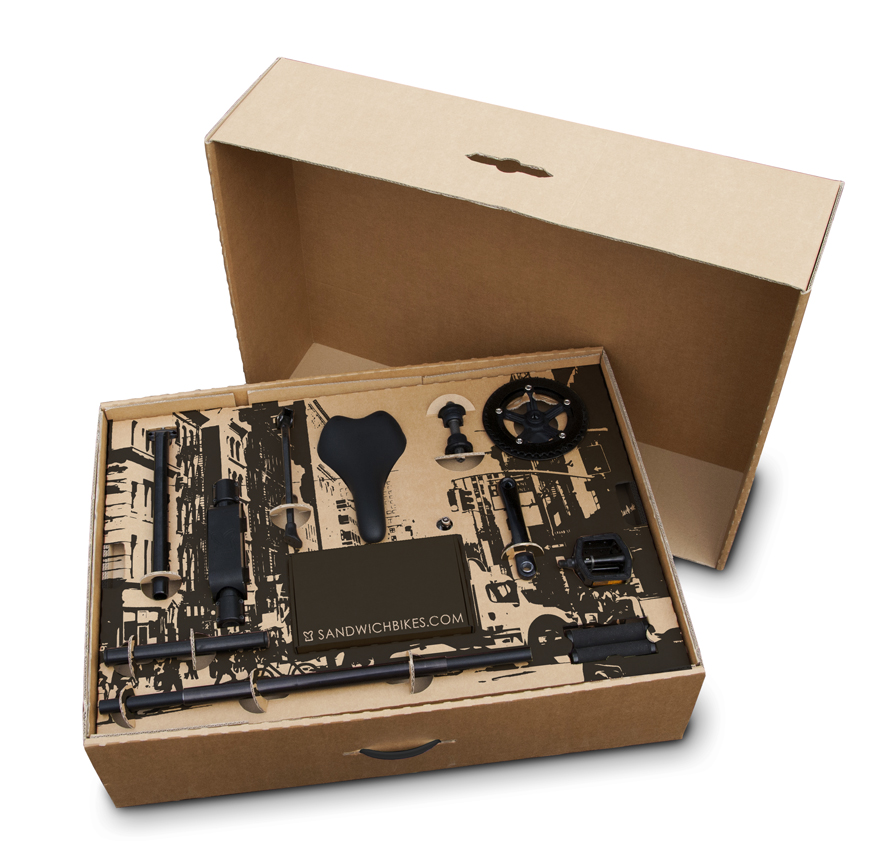 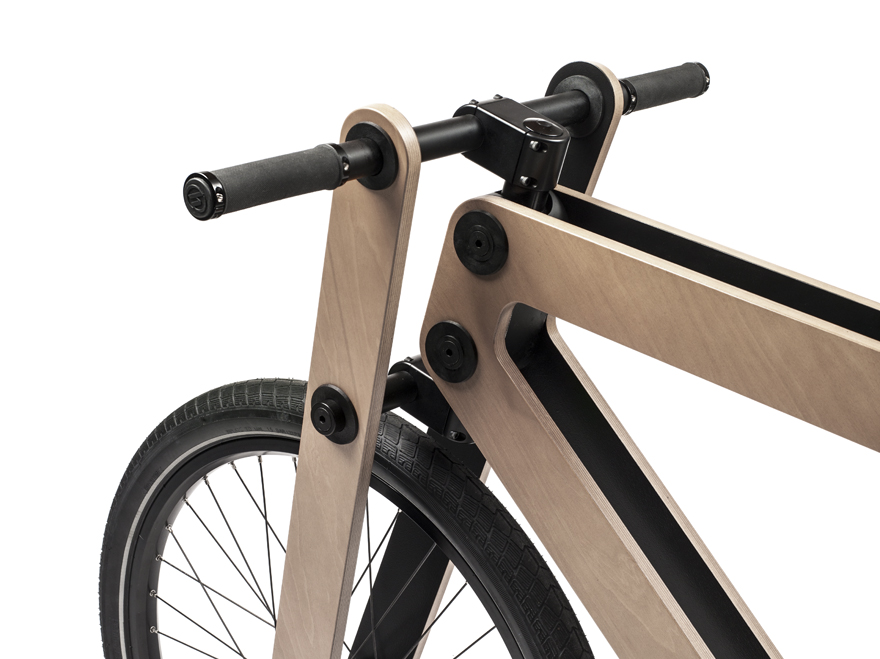 They made a full-size version of the winning 1:3-scale bike they submitted to the competition and exhibited it in Milan. While positive hype was just what they were looking for, Bleijh also had to deal with what is surely many designers' worst fear: "The prototype—and with it intrinsic knowledge of the bike—was stolen at the exhibition."

A new prototype was made—along with improvements to the original design—but the Sandwichbike didn't get its moment in the sun until 2010. The buzz around the concept had held strong, motivating the team to finalize the idea and make it available to the masses. You can now order your very own flat-packed bicycle on their website. 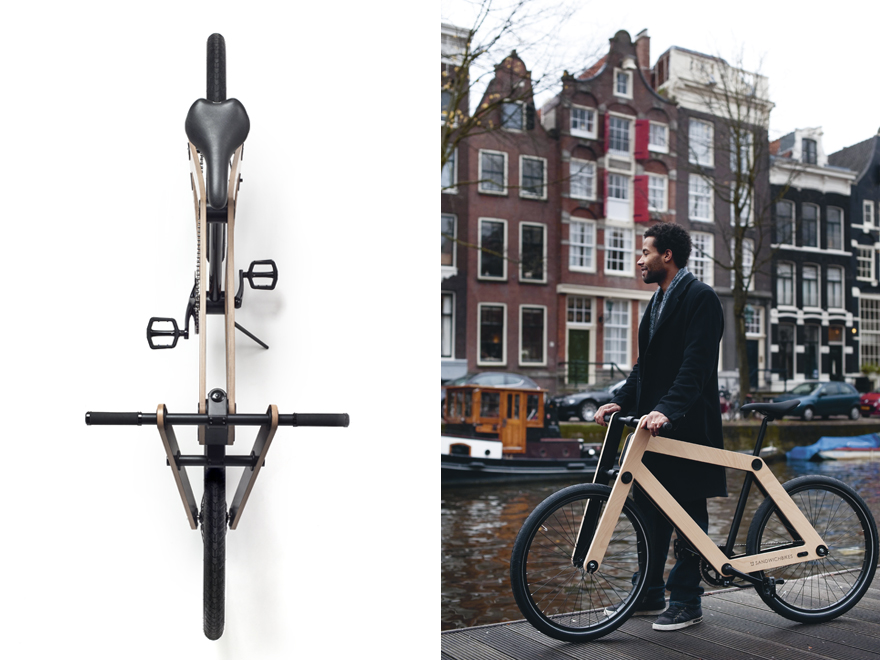 The aesthetic of the bike is intriguing, to say the least. Leijh's design scarcely resembles the tubular steel varieties we're used to seeing; nor is it like the bamboo bicycles that we occasionally come across. While it offers a radically different look, the Sandwichbike nicely captures the principle of self-sufficiency at the heart of cycling: "Assembling your own Sandwichbike will wake up the craftsman in you," says the team. "You'll learn bike basics when it comes to assembling and how take care of your self-assembled bike." Because there's nothing a cyclist enjoys more than digging in and learning just what makes their bike tick.