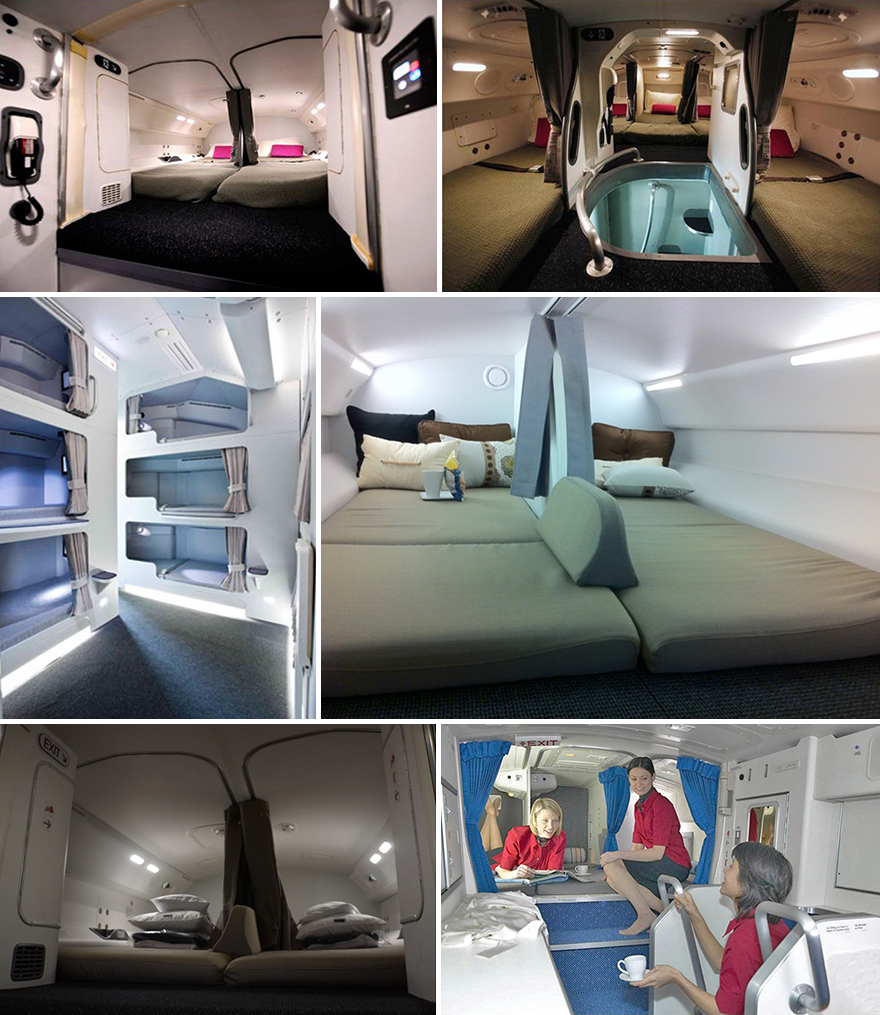 On long-haul flights, both flight attendants and pilots need to take breaks. Yet airplane designers are of course forced to cram cabin crew rest areas into confined spaces, to leave more room for revenue-generating passenger seats. So how do they manage it, and what do these spaces look like?

Crew Rest Compartments, or CRCs, vary in design from plane to plane. Boeing's enormous 787 has this pimpish loft space nestled above the passenger compartment, where up to five flight attendants can catch some shuteye: 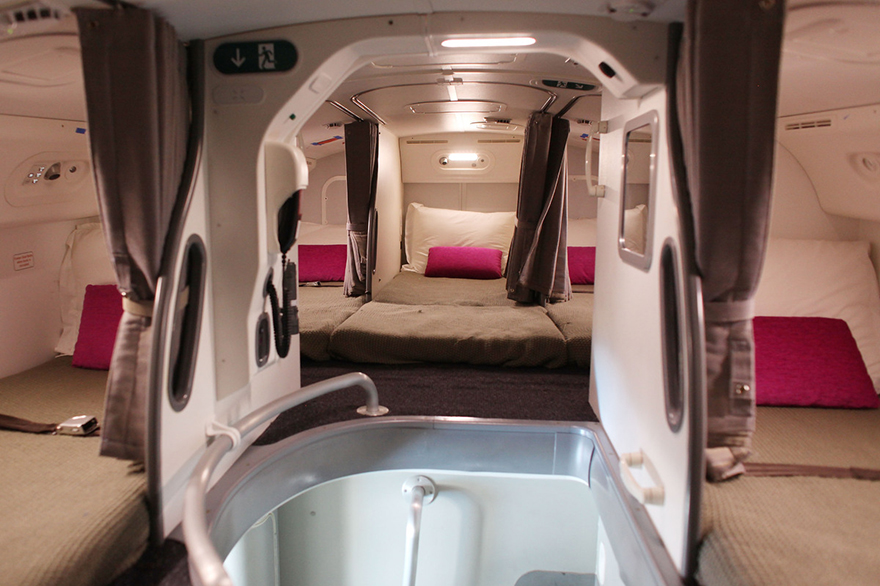 The photo above is of the space as it exists in an actual airplane. If we look at the design-phase mockups, below, we can see the designers initially had a slightly different idea: In addition to the cleaner, clutter-free surfaces, the place is well-stocked with pillows in an effort to promote cabin-crew pillow fights. 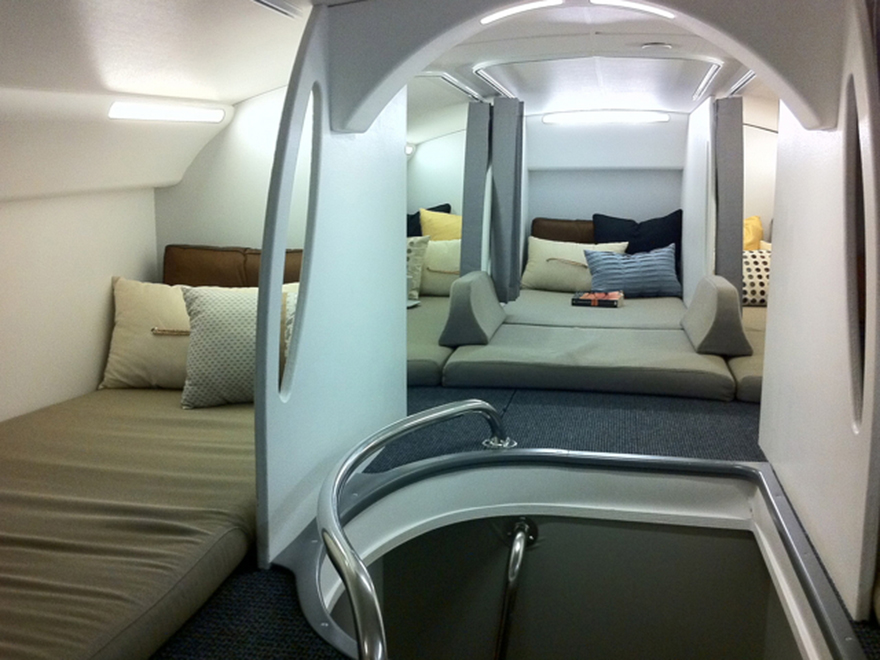 The pilots have their own separate sleeping compartment. It features the same privacy curtains suspended from ceiling-mounted tracks that you see in the flight attendants' bunk room. 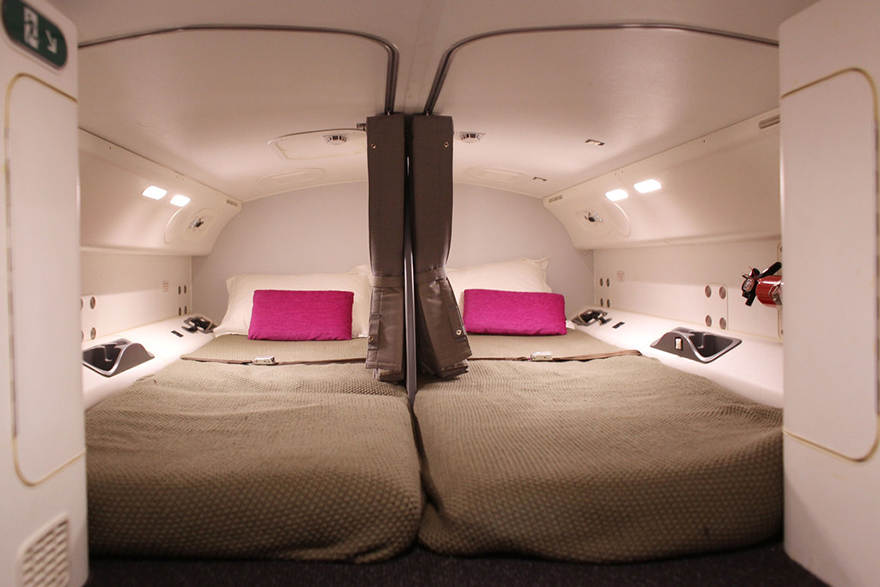 In this photo, shot by The Flying Engineer, we see the 6'3" Captain Pat Bearce is able to stretch out in one of these comfortably. 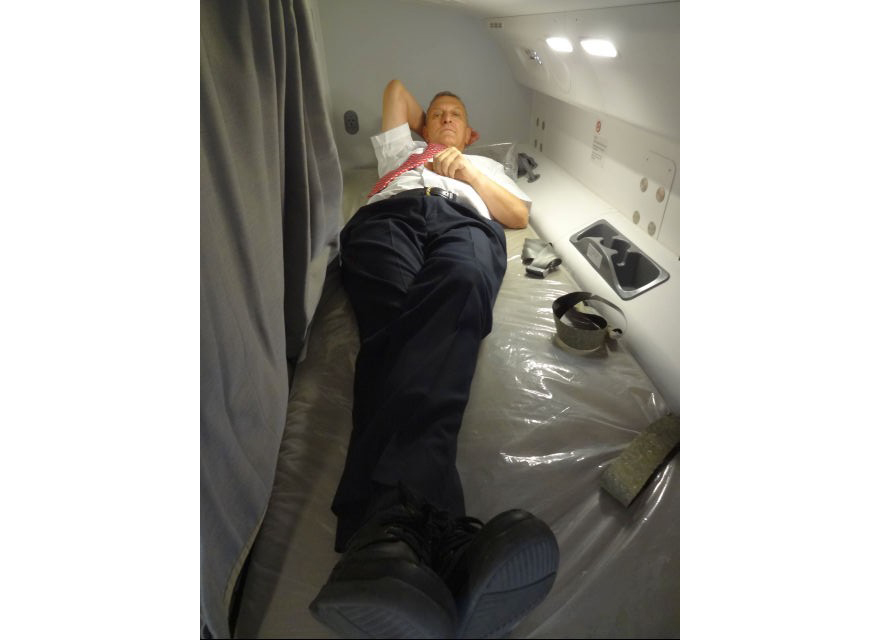 Here's video from a different pilot showing more details of the pilot's CRC. (It's distressing to think that this man has the responsibility of piloting a 787 yet cannot hold his phone in the proper orientation to shoot video.)

Placing the CRCs near the top of the aircraft seems to be the current favored design approach, though it was not always this way. Airbus, for instance, used to place the CRCs in their A350s beneath the cockpit and passenger cabin, respectively, then decided to move them above (to increase cargo space) when they transformed the plane into the wide-bodied A350 XWB.

Here we see the A350 XWB flight attendants' area, which sleeps six... 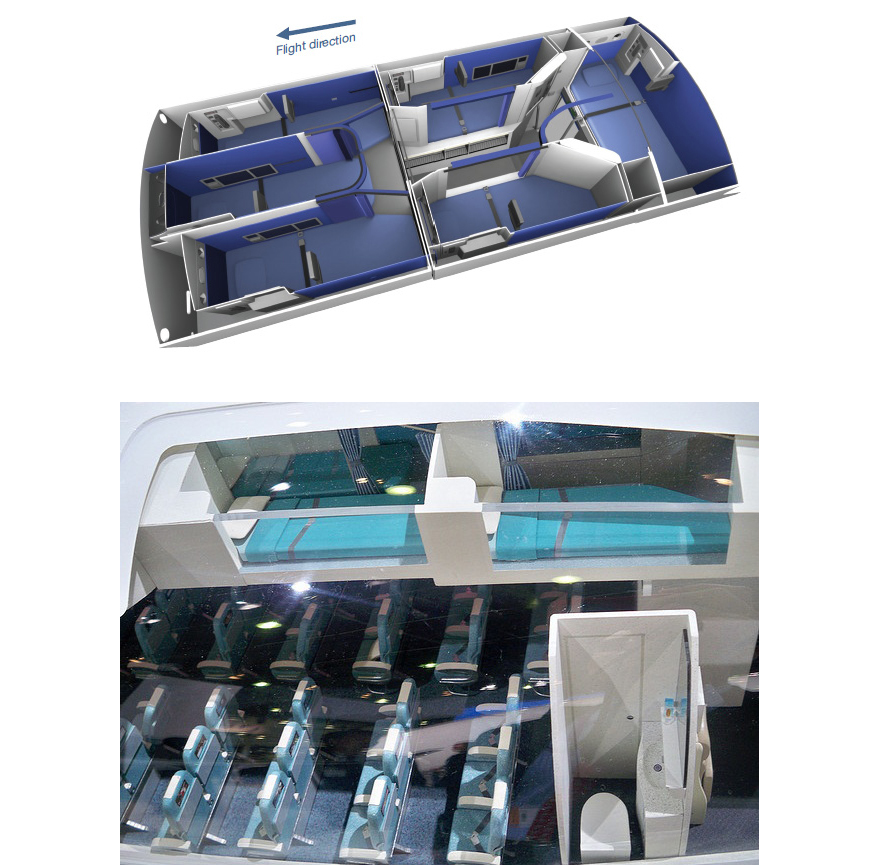 ...and the two-berth pilot's area, below. Note how they've cut a little valley in between the foot of the two beds to provide access area in the tiny space. Also note that there's a comfy chair on the lower level where one pilot at a time can sit down and enjoy a nice cocktail. 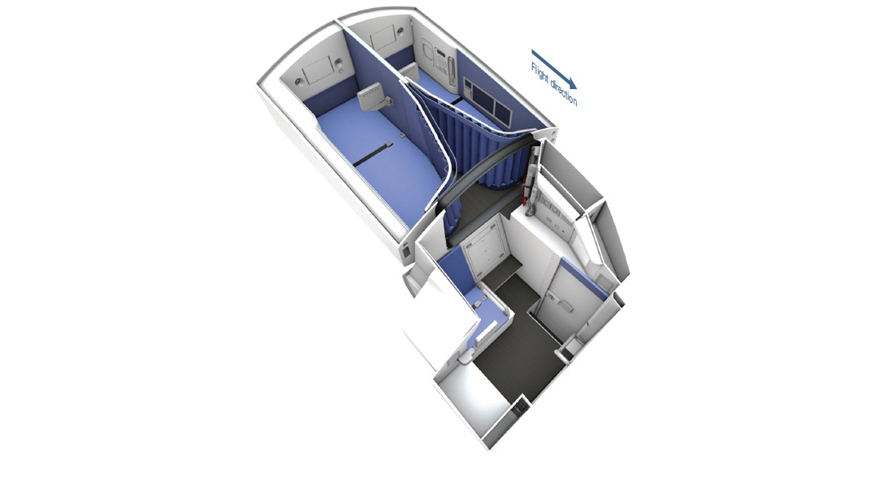 If we shift back over to Boeing—whose interiors are primarily designed by Teague, by the way—TravelSkills founder Chris McGinnis reveals that "The 8 Best Beds on a Boeing 777" are not in the passenger compartment, but in the CRCs:

The pilots' CRC looks a bit more austere, but they've each got a lounge chair, with the beds behind: 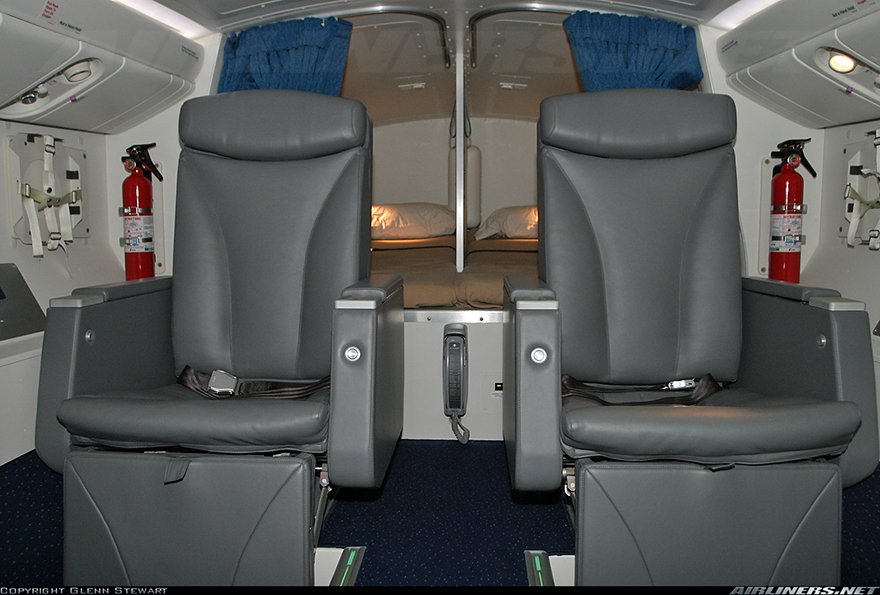 Many of you are probably wondering what the CRCs look like in Airbus' mammoth A380. Designed by Diehl Aerosystems, they're as gargantuan as you'd expect, sleeping no less than 12 by stacking the bunks three high: 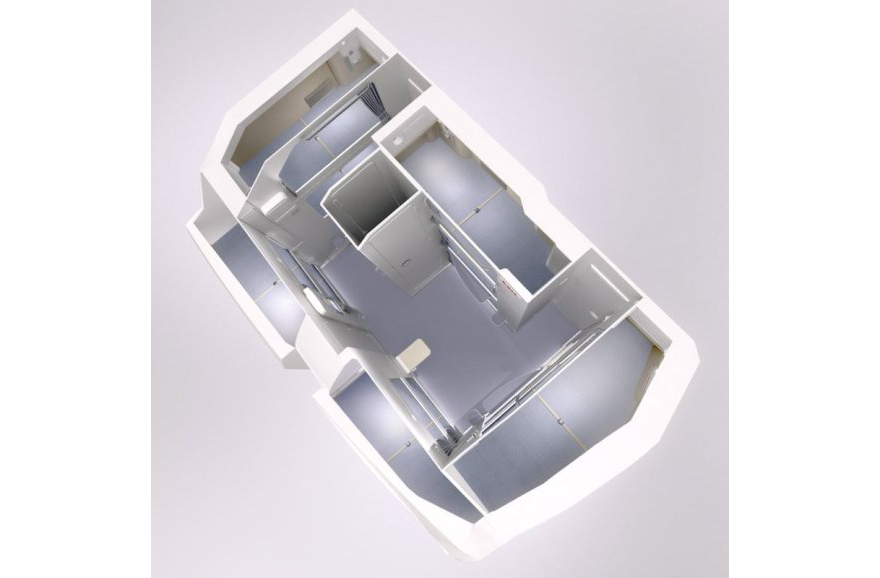 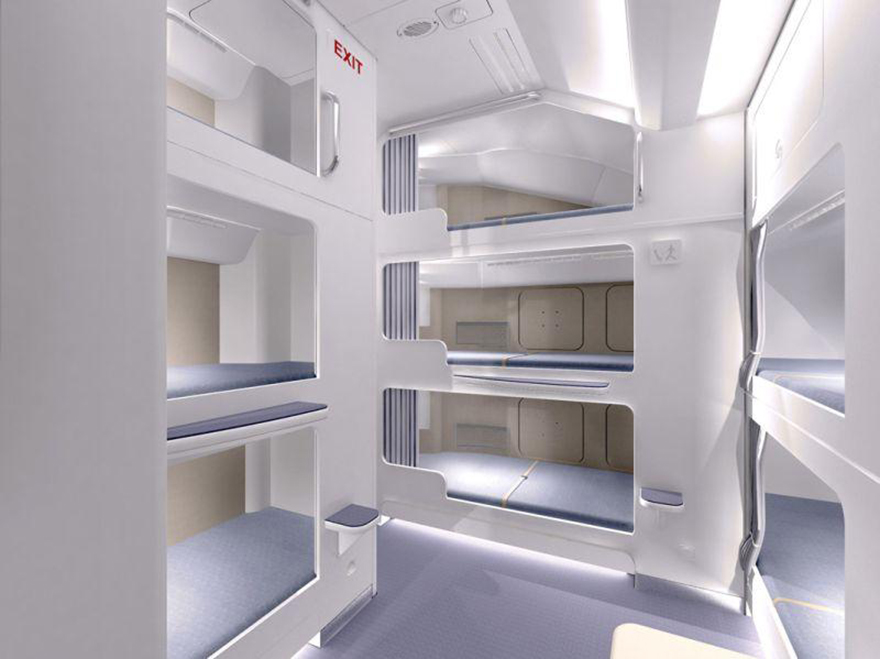 Going past the renderings, here's the real deal as kitted out by Emirates and shot by blogger Sergey Dolya: 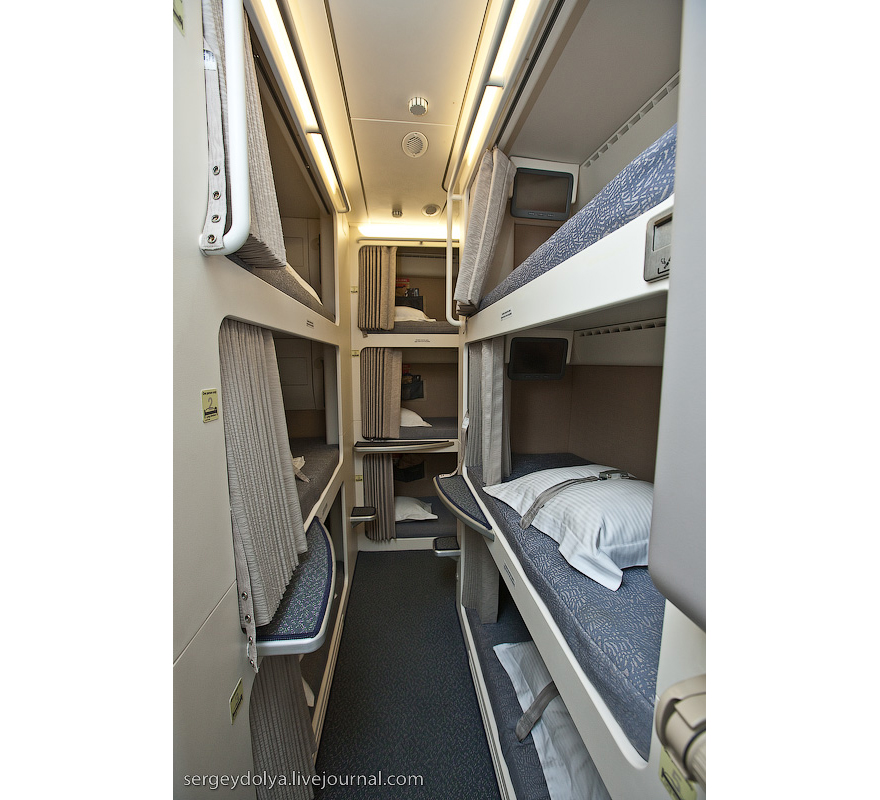 I was not able to find shots of the pilots' CRC on an A380... but I picture it looking like this: 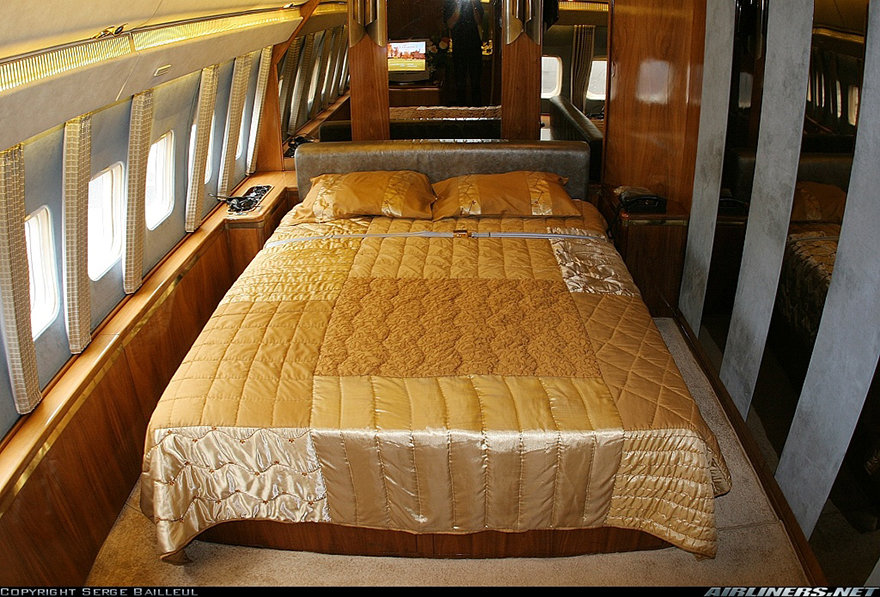