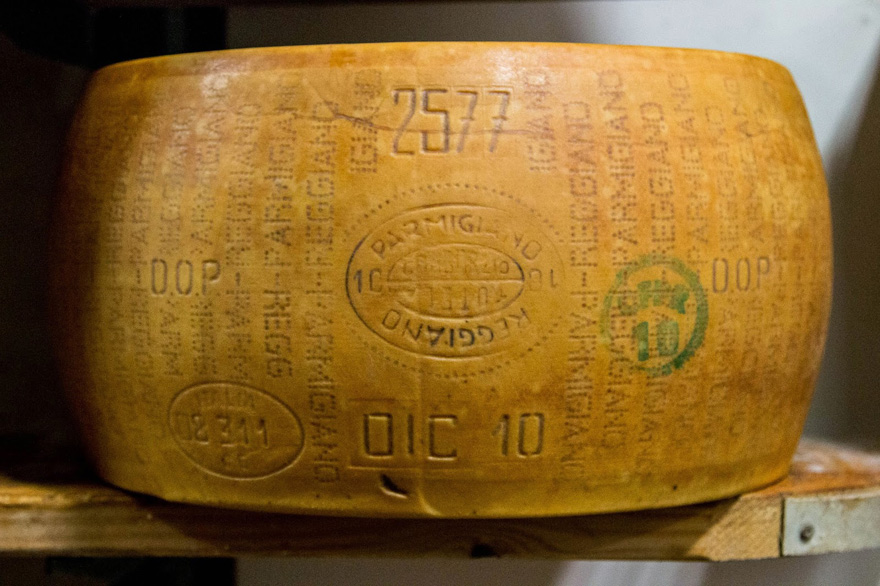 Cheesemaking is a millennia-old industry, full of straightforward food science as well as dark corners of tradition and biological happenstance. Understanding the variety of traditional cheese production can make for a very long grocery trip, but some of the salient details may have escaped you by hiding in the packaging. Many cheese counters prominently display the reserve wheels of cheese that haven't been parceled out into dinner-party-sized chunks, and almost every counter sells wedged cheeses with clearly visible rinds. This isn't just to conjure delicious old-world charm. If your cheesemonger is nowhere to be found, or if you're generally foodie-shy, here are a few fun facts you can find built into the hard rinds of fine cheeses.

Country of origin. Like many wines, some types of cheese are regionally specific. Parmesan, or Parmigiano Reggiano (the so-called King of Cheeses), hails from a land of salty paternalism—Italy and Italy alone. Because by law it must be produced in the provinces Parma, Reggio Emilia, or Bologna, that wheel of cheese must sport at least one prominent D.O.P. stamp to be legit. On French products you'll see an A.O.P (possibly A.O.C), and regional American makers (like those using Wisconsin milk) use their own stamps too. Some cheeses give more subtle clues, like Spanish Manchego which virtually always has a basket-weave rind, having been historically pressed in grass baskets traditional to the La Mancha region where it is produced.

Cheese type and region. Though we rely heavily on our local cheese counter for proper labeling, most rind-bearing wheel-born cheeses do what they can to clear up the basics. It's very common for the basic info about type, brand and region to be carefully written in multiple orientations around the perimeter of the wheel, so it can be seen even in small segments. Bold dotted-line letters are often used, likely because stamps and dyes used on living, breathing cheeses tend to become less distinct as the rounds age, like that tacky text tattoo you got in college. Certain shapes often correspond with cheese type too. Pecorino Romano often uses a repeating dot pattern, along with a sheep's head icon within a dotted diamond. Grana Padano is completely covered with ovaloid "lozenge" symbols and four-leaf clover icons."Producer number." Seen at the lower left of the image at top, this serves to identify the exact farm, dairy or cheese factory where the wheel was produced. While most of us aren't so refined as to have tastes down to the specific bio-regional origin of our cheeses, knowing the source can, again like wine, provide insight about flavor and make you sound like an impressive know-it-all. You don't really need this one, just use the word terroir and call it good.

Date of "fabrication." This one is big and a big deal. The month and year of initial production are very useful in figuring out the overall nature of the cheese. The origin date is marked large in at least one place, often multiple times around the wheel. If you're looking at a section of cheese without this vital data, scan around the section for siblings from the same wheel that may give you a hint. In almost all rind-bearing cases, the older the cheese, the deeper, drier and more pungent the flavors.

Quality and Certification markers. The different designation markings above are indicators about age, quality and use, hot-stamped into the rind of the cheese after inspection. The first of the stamps is on a standard run parmesan: meets the standard features of the type, and will be best after it hits two years old. The "Extra" (or less contemporary "Export") designation is an additional high quality marker, given after a cheese hits a year and a half and meets high standards for export. "Mezzano" is a mild young buck, best eaten within its first year and scored through the stamp and all the way around the wheel.

Early in the cheese making cycle, around two days after the curd has first been separated and put under pressure, the baby cheese is released from its mold and marked with the date. Fast-forward one year, and a cheese honcho inspects every wheel with a special cheese hammer, looking for surface imperfections and listening for bad cheese vibrations. If a wheel passes muster it's given a certification brand, and left to weather out its days before trundling off to a deli counter near you. If it didn't make the cut for a stamp like these, most almost-there parmesans are sold for grating or other less gourmet ends to the endless shame and chagrin of its parents.

Most of this information is required by law for export, and must be preserved when breaking down a wheel. Traditional cheese-cutting is done in such a way as to maximize the identifying markers while showing off the grain and qualities of the cheese itself. For good measure, here's a look at how cheese wheels are traditionally parted out that managed to go viral last week, because sometimes the Internet is a sweet and tasteful place after all.