How a Failed Kickstarter Campaign Returned, Succeeded, and Spawned a Transportation Subculture 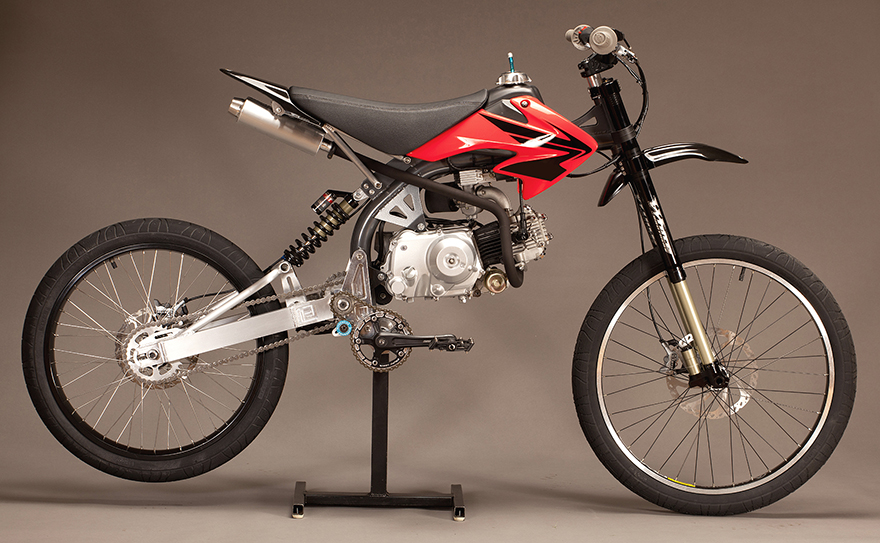 Price inflation doesn't usually make a physical noise, but it did in 2008, in Cam Woods' neck of the woods. As gas prices rose to $4.50 a gallon, California-based Woods noticed that less folks were driving and more folks were buzzing around town on mopeds and motorized bikes. "All of these bikes were using 2-stroke engines that sounded like chainsaws on steroids," he writes. "I thought the forest was being cut down."

Woods reasoned that there must be a quieter, cleaner alternative than whipping around on a smoke-billowing two-stroke engine, and as a bicycle/motorcycle prototype builder for nearly two decades, he was in a position to do something about it. His work background made him well aware of a certain ubiquitous and tiny (50cc) Honda motor with a very long history:

The Honda 4-stroke horizontal OHV motor is the most popular and most copied engine in the world. It was first introduced in the Honda Mini-Trail 50 in 1969 and is still being used today almost unchanged in the CRF50. Companies in China have been making copies of the Honda engine for years with all kinds of variations in design and displacement, but all have the same motor mounts as the Honda. The copies of the Honda XR50 spawned a whole group of minibikes called "pitbikes." The amount of aftermarket performance parts for the Honda XR50 and its pitbike clones is endless.

Woods figured that the ubiquity and affordability of the motor—you can buy them used and inexpensive on Craigslist and eBay, and a new Chinese-made 50cc Lifan clone can be had for a little over $200—made it the ideal DIY snap-in powerplant. He then Frankensteined together a bike using off-the-shelf mountain bike parts connected to a custom frame and swing arm of his own design, and mechanically solved the problem of having both a motor and pedals capable of driving the rear wheel. 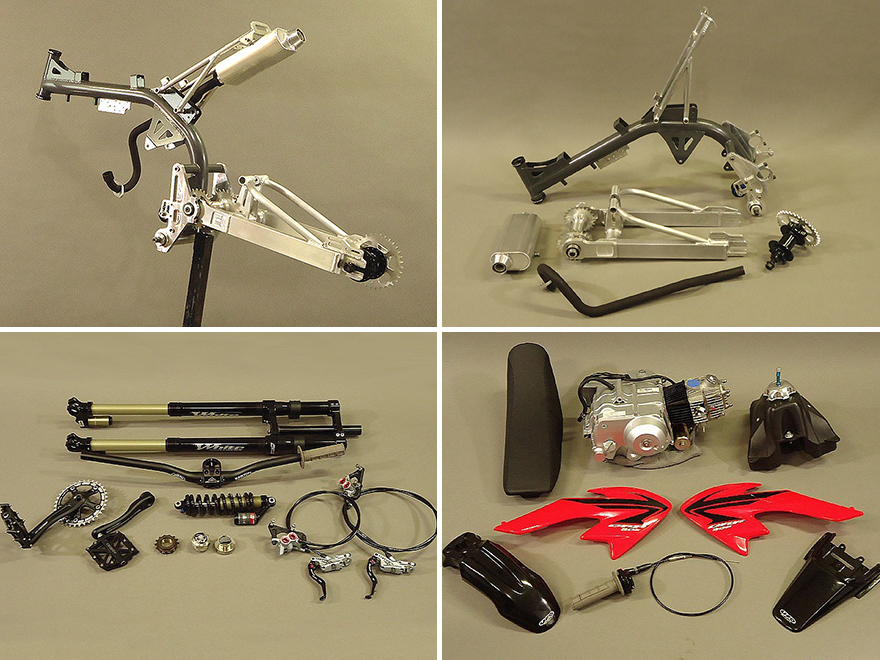 Woods dubbed his invention the Motoped Motorized Bicycle. It was reliable, lightweight compared to a motorcycle, and slightly heavier than a two-stroke but a lot cleaner and quieter. It was also pretty efficient, delivering 120 miles of travel on a single gallon of gas. And swapping in larger motors was also possible; popping in something closer to a 150cc meant you could go as fast as 65 m.p.h, though the mileage dropped down to closer to 90 miles per gallon. 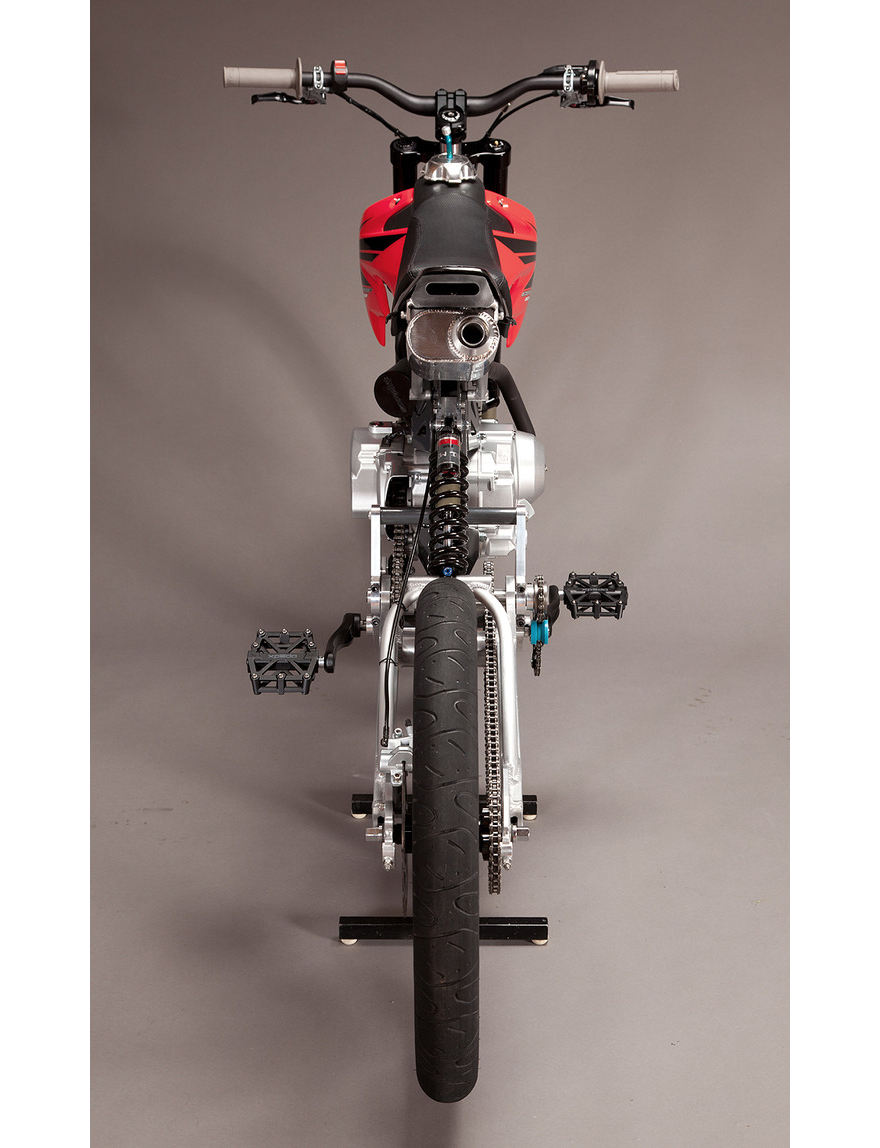 Woods began selling Motopeds in small batches, but the bikes were expensive. Calculating that he could get the price down with a larger order, he posted a Motoped campaign on Kickstarter. The cheapest-possible buy-in for just the custom frame kit ran $970, and for the rolling chassis, which contained everything except the motor (which he reasoned it would be better for the end-user to purchase the motor separately, due to the variety of existing versions and their own preferences) rang in at $2,720.

At $160,000 in funding, this first campaign wasn't exactly a flop, but it was 90 grand shy of the $250,000 he needed to make it happen. On September 6th of last year, the project page had the ignominious "Funding Unsuccessful" stamped across it.

Undeterred, Woods went back to the drawing board, redesigned parts of the frame, and most importantly found a new, cheaper manufacturer. By November he launched a second campaign. This time the DIY kit came in at just $599, and early backers could get the rolling chassis kit for $1,500. His overall target was also much lower, at $80,000.

By the campaign's end in December, it had pulled in $378,935 and had "Funded!" stamped atop the project page.

Today, less than a year later, Woods runs Motoped as a company, still selling the Frame Kit for $599 and the rolling chassis kit for just under two grand. The Motoped Facebook page has nearly 200,000 likes, while an ancillary Motoped Build/Ride Facebook page has instructions on how to build the bikes out and is filled with members—more than 3,600 at press time—swapping photos of their own build-outs and how-to tips. This Motoped subculture appears vibrant. 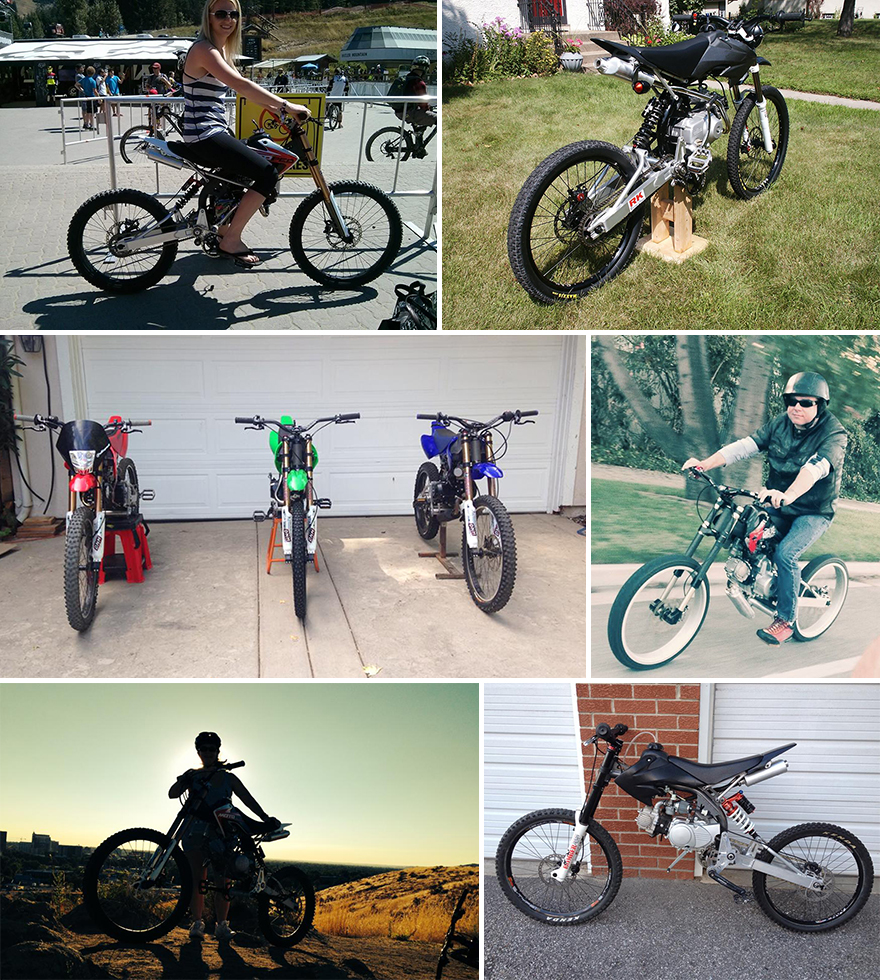 But though Woods' persistence paid off, there's still more work to do and not all is rosy. Backer comments made on the second Kickstarter campaign's page, dating from earlier this year to this very month, contain a litany of complaints related to shipping problems, with few of them answered (at least directly and publicly). One of the most damning comes from a Clayton Williams, who wrote on July 12th:

This is getting really frustrating as it's been 2 1/2 months well overdue. Not even any discounts offered, nor granted when asked. Others whom have ordered off the website, have well in advanced received their kits. Very unpleasant communication. Very displeased.

Please let me know what's going on, with my so-called package. Again I'm feeling duped. Paid in December, promised in April, delayed until who knows. Unacceptable.

I'm not understanding how the ones whom have rushed with payments to form production of a products have been treated so poorly. I paid $2,600.00 for a full kit, and those whom have paid only 600.00 are receiving their products well a head of those of us that paid the big bucks.

So, a lesson and reminder for would-be Kickstartees. If you believe your idea is sound and the campaign fails, go back and see how you can re-work it to try again. And if you make it, don't forget about the folks who helped you get there; see if you can anticipate in advance the inevitable manufacturing cock-ups, and plan how you're going to handle them.

How a Failed Kickstarter Campaign Returned, Succeeded, and Spawned a Transportation Subculture