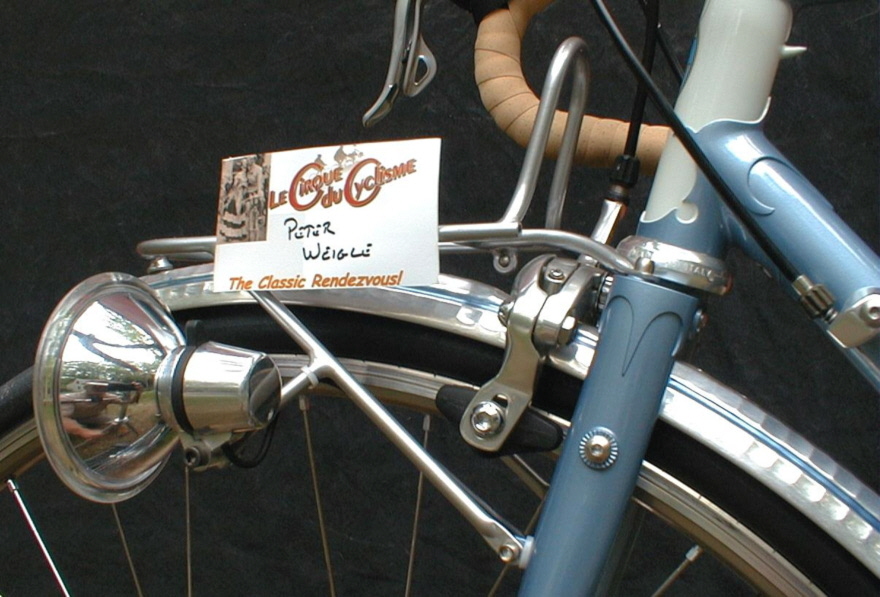 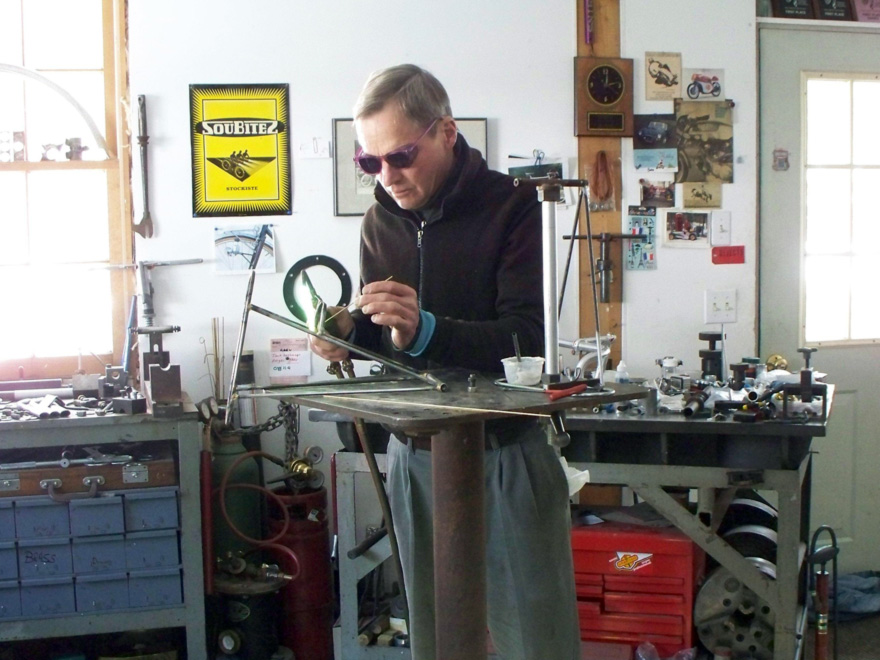 Once again, Core77 is pleased to be the media partner for the Bike Cult Show, which will once again bring the very best custom framebuilders in the Northeast region to New York City this month. Set to take place this weekend, August 16–17, at the Knockdown Center in Queens, the second annual Bike Cult Show promises be bigger and better than before. Earlier this week, we heard from new kid on the block Mathew Amonson of Airtight Cycles; the subject of our fourth and final builder profile is the venerable J.P. Weigle, who has seen fit to chronicle his storied career in a photo essay.

If you like what you see here, head over to Knockdown Center this weekend to see these works of art in person at the Bike Cult Show! 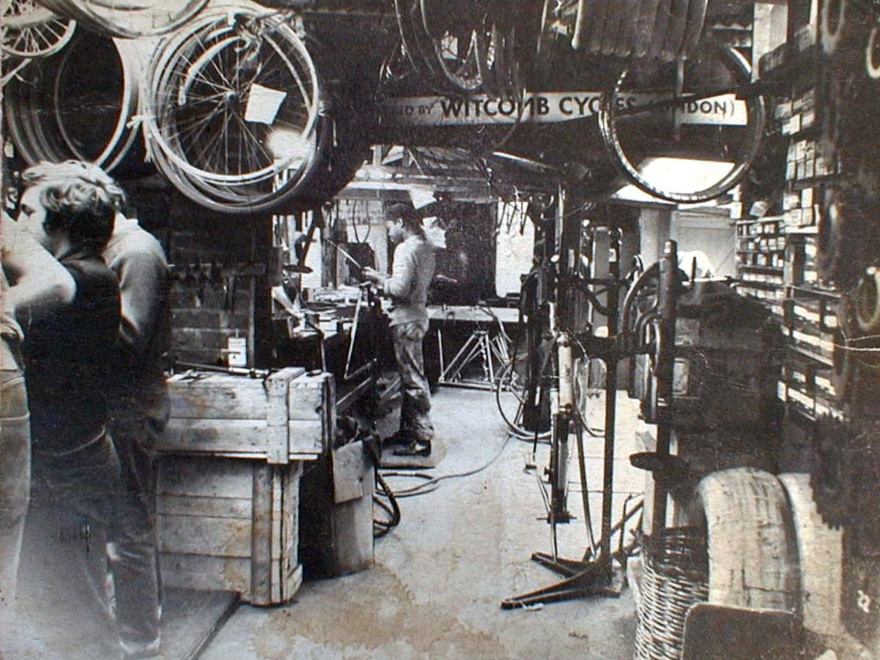 I never dreamed about being a frame builder—in fact, I had no idea such a person existed. In 1972, a friend encouraged me to interview for an 'interesting opportunity,' and three weeks later I was standing in this shop in Deptford, England. The shop was old, old school: No jigs, no machinery, no alignment table etc. We drilled vent and pin holes with hand-spun twist drills. Hacksaws, files and elbow grease got the job done.

After a seven-month stint, I came back to the States. I worked in a small frame shop, Witcomb USA, along with Richard Sachs. I rode and raced my bike as much as I could. I made this bike for myself in England; this road race, at left, was a hilly one up in Vermont.

At right, a few of the mid-years crew at Witcomb USA. That's Chris (Fat Chance) Chance on the left, Fred Widmer in the center, and me at the right with my Clockwork Orange haircut.

Witcomb USA closed its doors in '77. My plan at first was to get a real job... but instead I bought one of the Witcomb jigs, some of the tooling and some material inventory. This photo was taken at my first shop, a Quonset hut at a local airport. I had no phone, so I used the payphone over at the field office. Customers took quite a chance driving there, wondering if I'd be there or not.

This mixte touring bike was one of the first bikes built in my new shop. Fenders, Ideale saddle, hmmm... 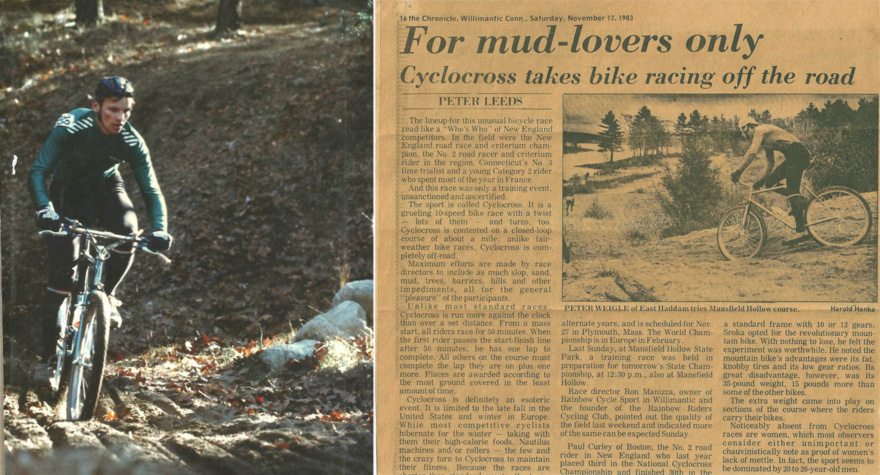 In the early 80s, a friend from California told me about a 'mountain bike' he had just purchased. He sent photos of his Ritchey and some sketches. I made my first mountain bike in '82 and rode it everywhere. I went to Fat Tire Bike Week in Crested Butte, CO, in '83–4. All of the MTB luminaries were there and it was ground zero for that sport. Moab was just a dusty place in the desert at that point.

Racing soon followed. The early days were real grassroots affairs—nobody knew much about the sport, so sometimes we made things up as we went along. No one knew what to wear at these events either... you might see a classic Brooklyn jersey next to a racer in cut-offs.

I also used my lightweight specials in cyclocross events, which was legal back then. At the 1988 National Championships, I won the Vets race in fine style. 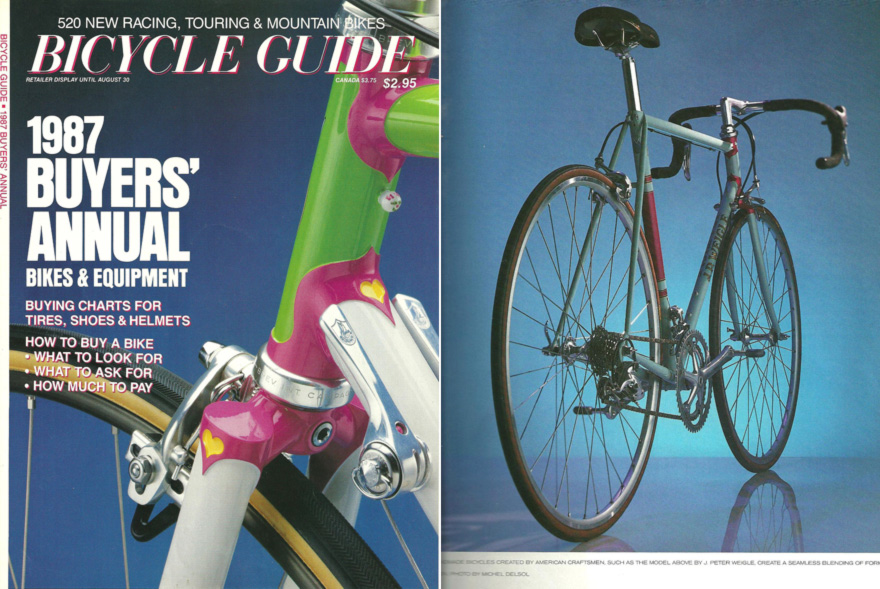 Even though mountain bikes were my newfound passion, I still made my share of road frames. This bike was displayed in a show and was also selected for the cover photo at left. I was just learning how to do these three-color schemes and was having trouble. I used a tooth pick dabbed in paint to touch up my mistakes... and I used the same 'tool' to paint the clown's face on the back of the pump bump. ;~)

And on the right, the 'money shot' in a Cigar Aficionado article. I called this bike 'French Reminiscence'—all it needed was fenders.

My first French bike was given to me after it was pulled from the scrap pile at a transfer station. Here it is, tongue-in-cheek at Mike Cone's Bicycle Classics show in 1996. This is way before Mike bought the Herse name.

At the same time, I was collecting cool fenders. My first pair was an alloy Frejus job with their name embossed in the alloy. I also collected some French and very early Honjos. 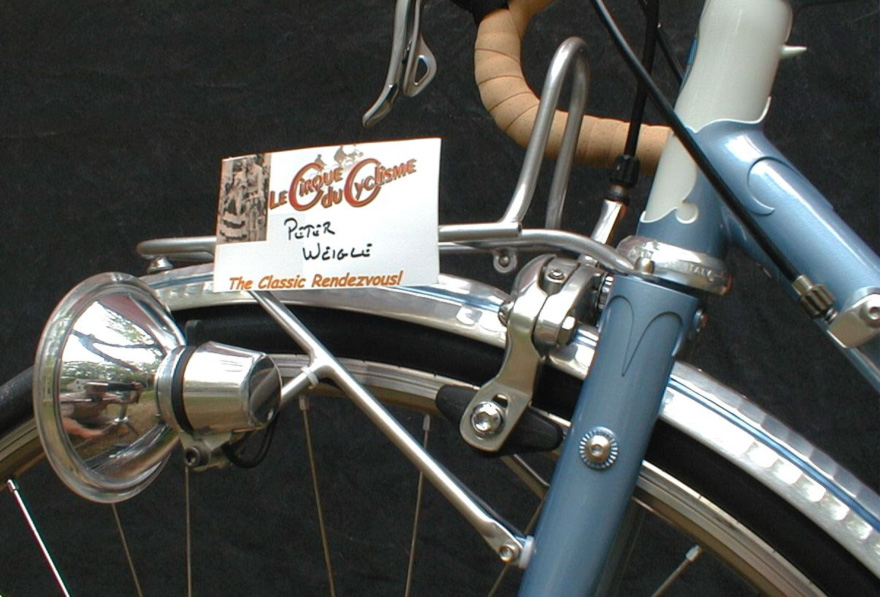 I started building this bike in 2002 to bring it down to the Cirque du Cyclisme 2003 event. Back then, most of the players were collecting Masi, Cinelli, Hetchins and the like—hardly a French bike in sight. This French-inspired randonneur bike proved to be very popular, winning the People's Choice and Best Neo-Classic awards.

Vintage Bicycle Quarterly was about to go to press with the first issue, and since that time there has been a tremendous revival for this style of bicycle. 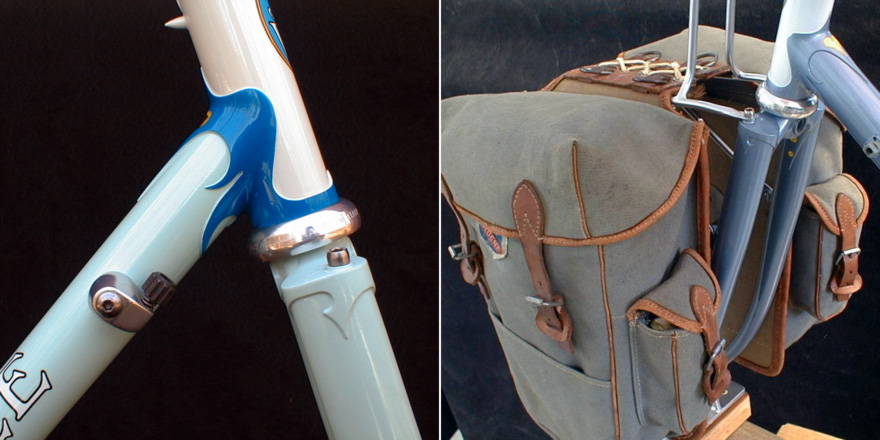 At left, my 2004 Cirque entry, featuring my Burlesque lug pattern. I was in an experimental mood at the time, trying lots of different shapes and colors.

At right, a front-end mock-up that was displayed at an early NAHBS event. The Sologne bags are vintage items and highly sought after. 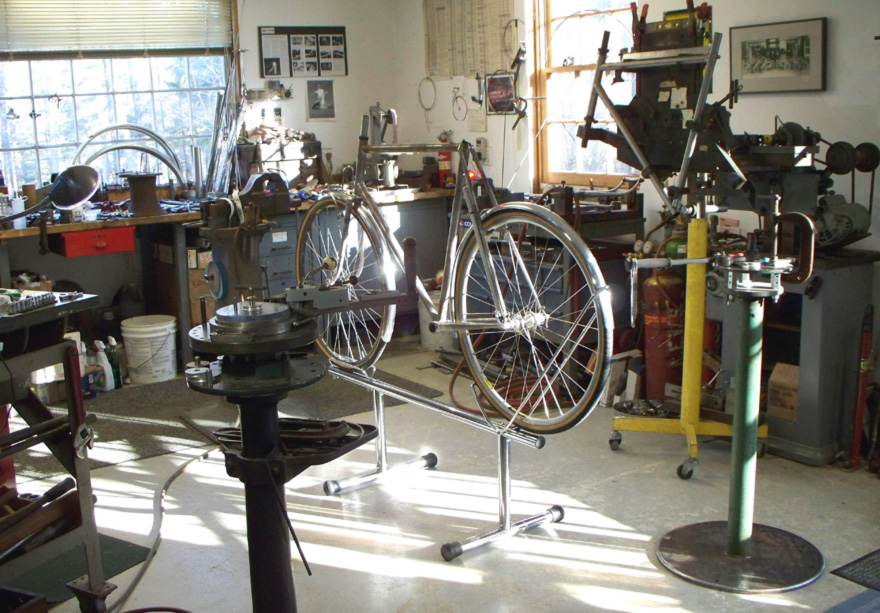 Morning light in the shop, a good time for contemplation for the day's creative endeavors. 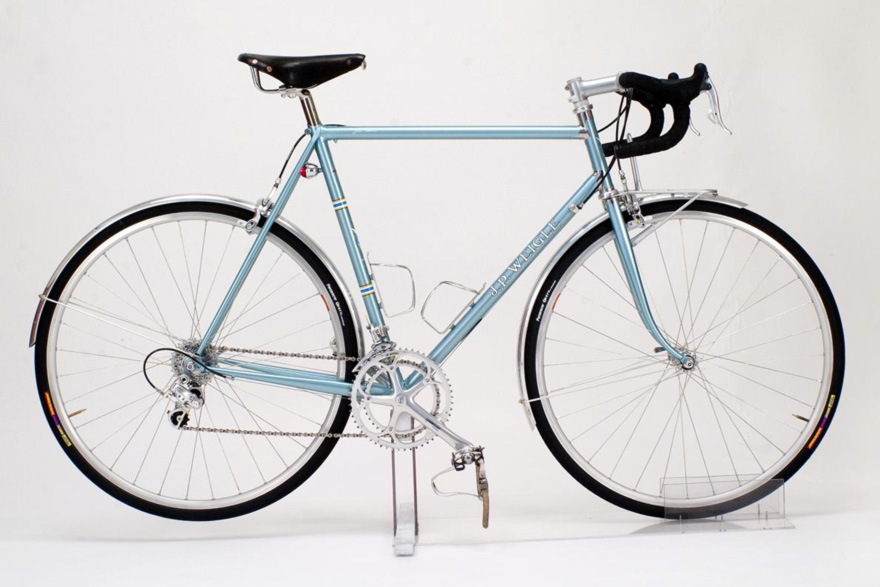 Best in Show - Cirque du Cyclisme 2006. This bike was simple, clean, with nothing to spare.

The Cirque gang have treated my bike so well. I owe a great deal of gratitude to Dale Brown for hosting the early events and Wayne Bingham for the latter ones, and to the people and the judges for honoring my creations... and treating me so well, a big thank you to all.

Examples of lug shapes that pull in lots of elements from several periods. I don't sketch or draw anything; the tools are guided by my hands and eye, and the shape emerges. 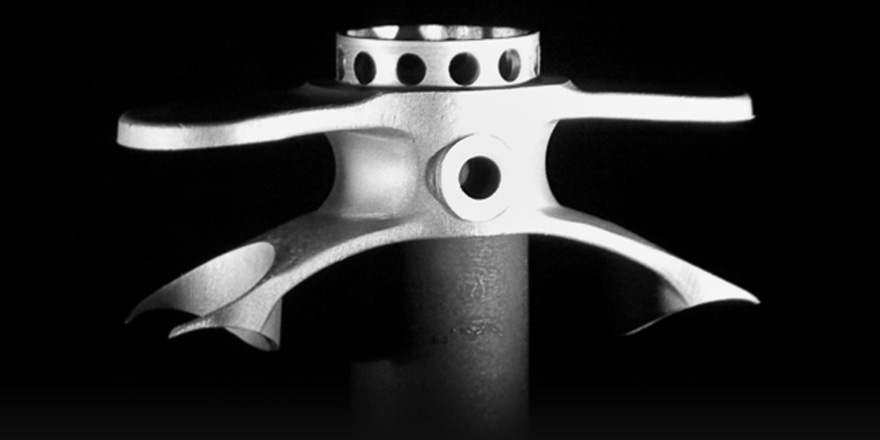 Someone looked at a photo on my Flickr page and commented that "sometimes the line between creative art and a functional piece seem blurred"—his words, but I like them. 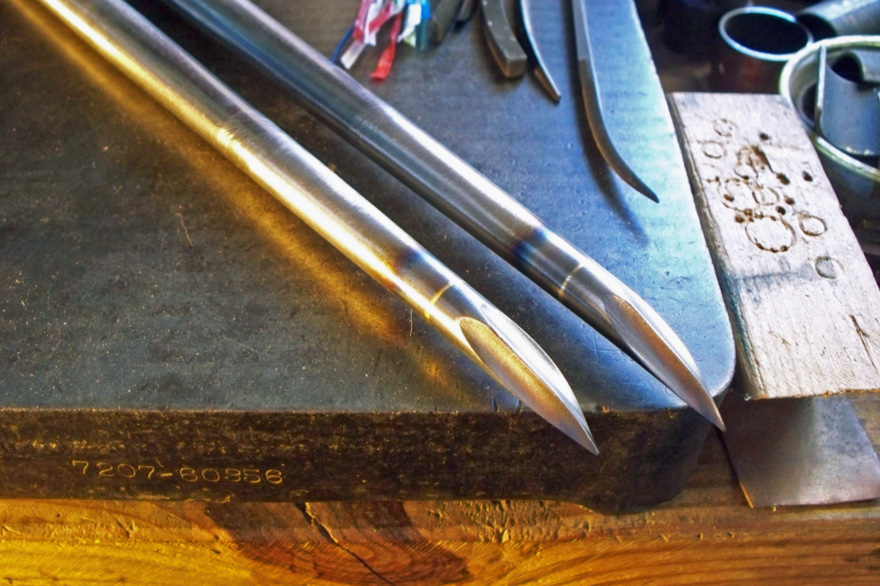 It's all in the details for me; small things matter. 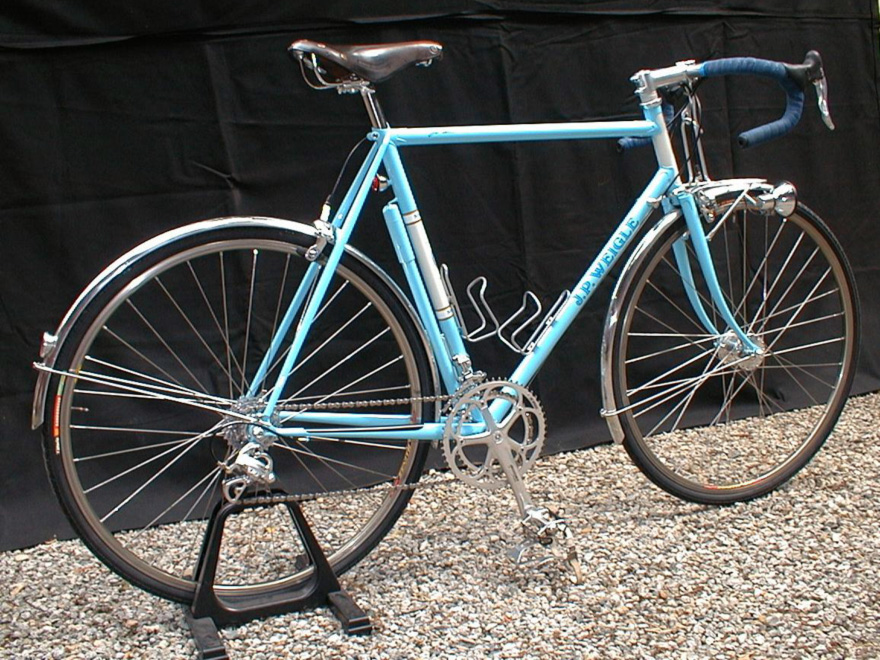 This 2005 Randonneur that was reviewed by Bicycle Quarterly. I was anxious about sending this out to be tested, but she held her own and did fine. I visited BQ headquarters in Seattle that year and got to ride with Jan and Mark, a most enjoyable and exhilarating time. 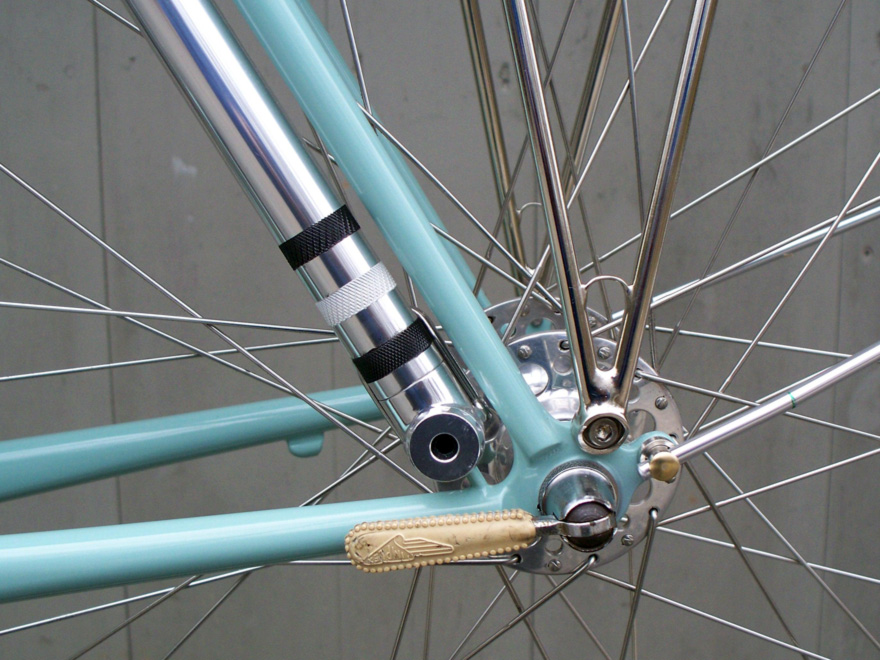 Stays, pump and dropout details—a lot of things happening in this photo, and they all have to work well together to get the look and function desired. 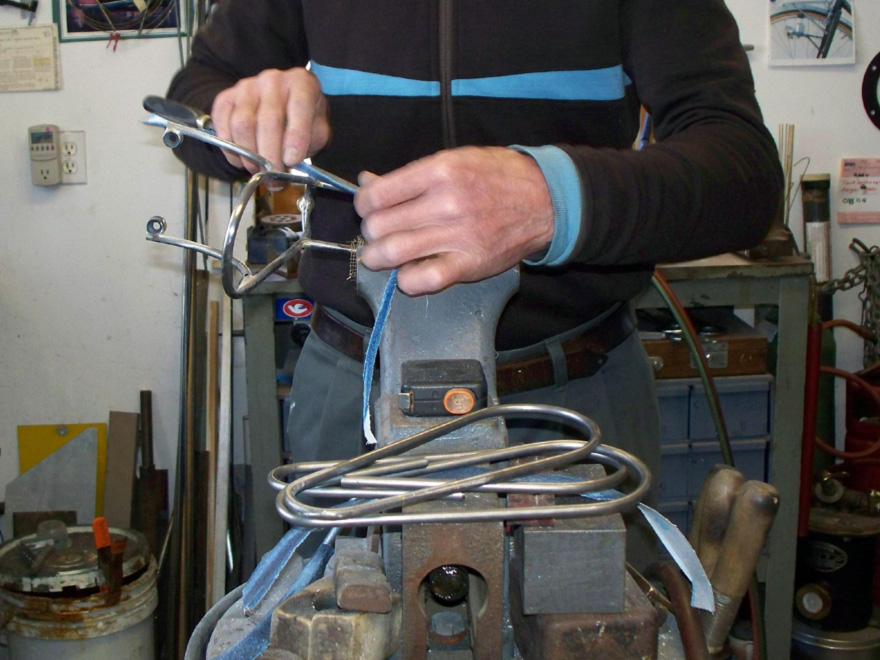 This has become my signature rack shape. It was inspired by the early work of Jo Routens, and has evolved a bit since that time. It is classic, elegant and timeless in my mind, and I love holding one in my hand when finished. 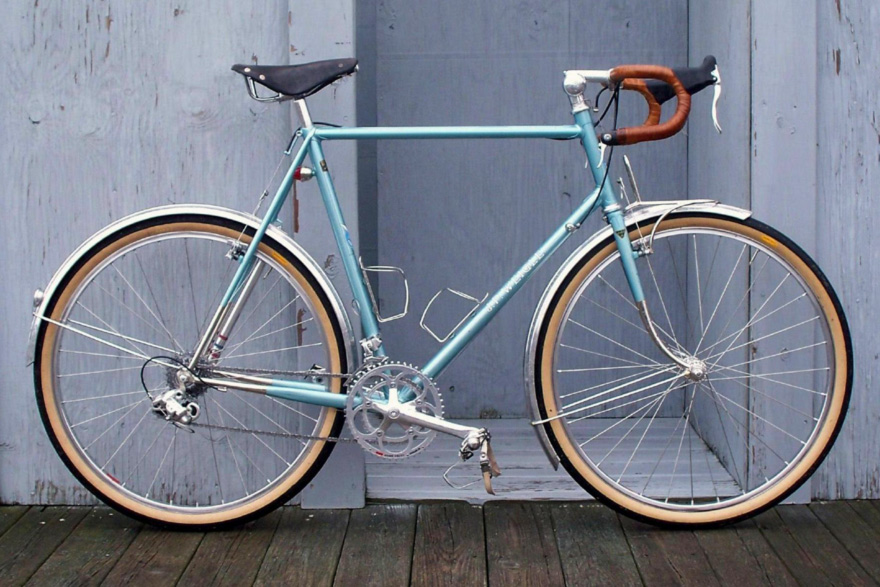 This aquamarine bike was a favorite of mine. I loved the color and would never tire of it, the bike was also wonderful to ride. It now resides in a nice collection. 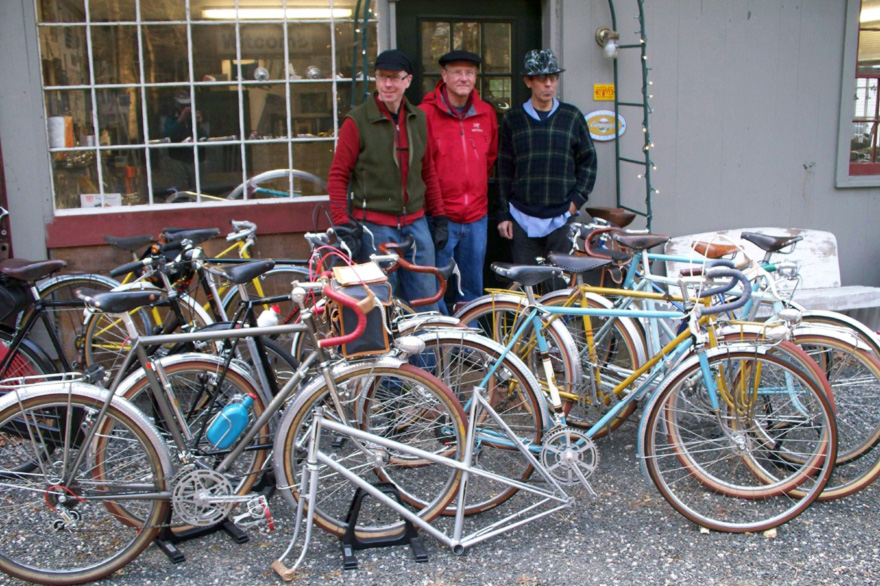 This was a simple get-together of friends who wanted to show me the French bikes they had purchased. After posting this photo, many asked that if I would have another get-together like that could they attend. And that's how French Fender Day began... 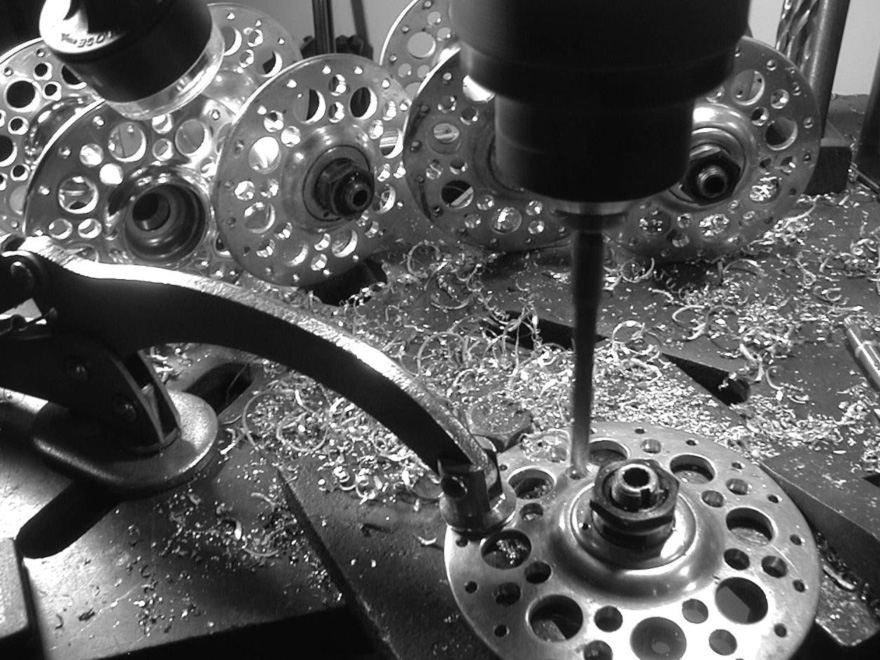 Not all of my work is filing and brazing frames—my creativity steals me away sometimes for projects like custom drilling Campagnolo hubs for decorative and classic appeal... 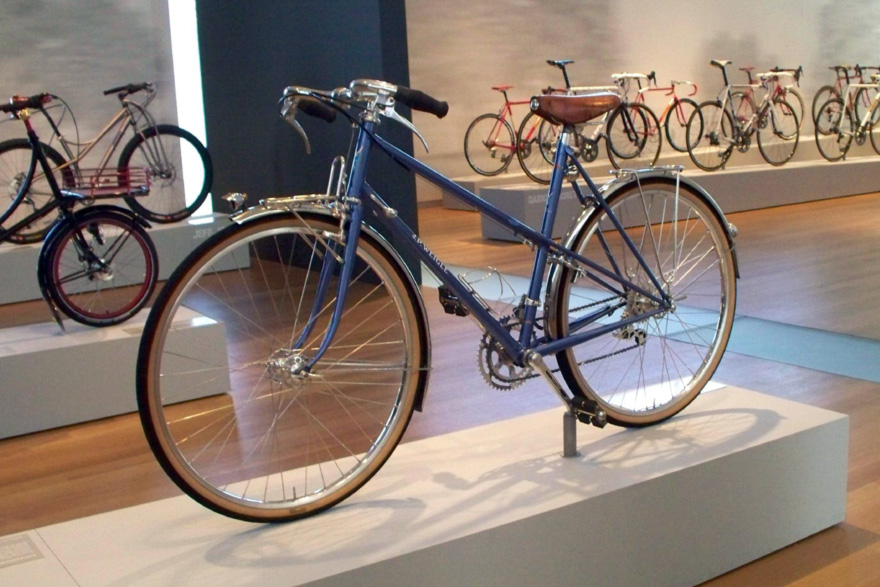 The Bespoke Bicycle exhibition at the Museum of Arts and Design in 2010. Six builders displayed their work. It was a real honor to be included in this show—I was told tha 92,000 viewers visitors the gallery in the three months. 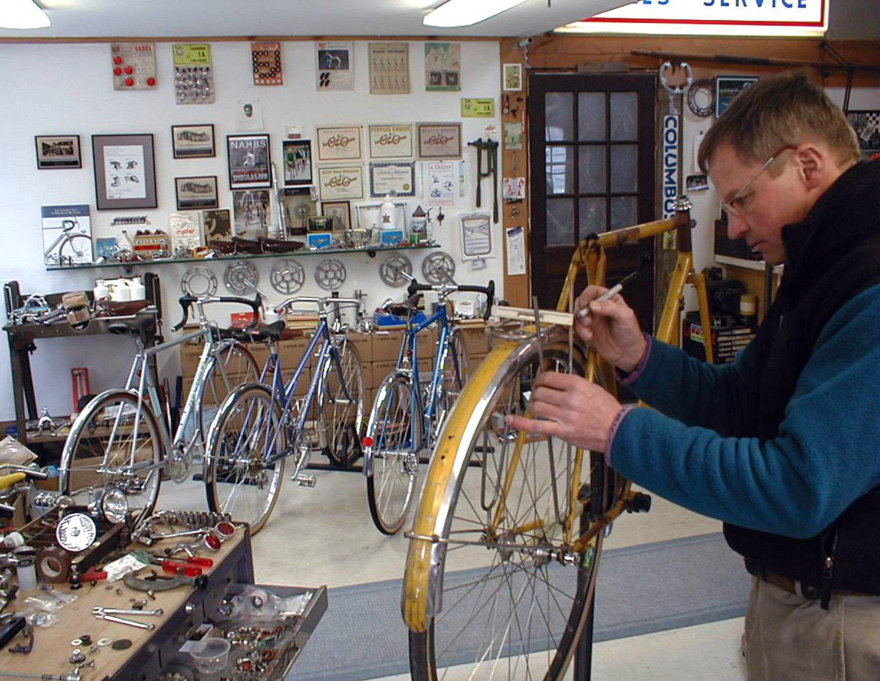 Restoring a French classic is part of the work I do in the shop. This one was a period-correct restoration. 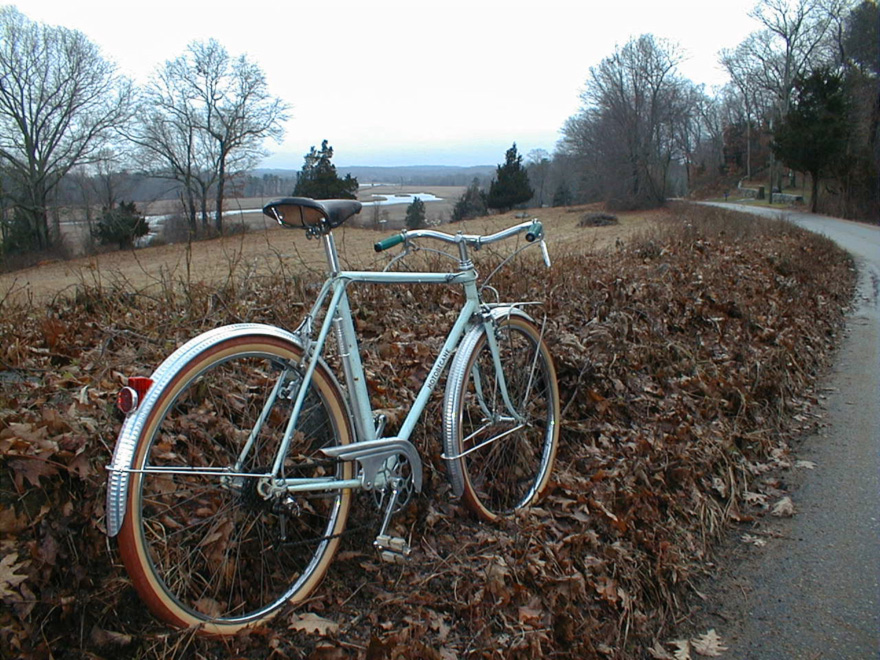 This Motobecane was a wreck when it showed up here. Unlike the period-correct bike, this was to be one of my 'creative restorations,' making it up as I went along and pulling it all together in a cool package. Here it is shown on one of the beautiful roads near my home; I know I'm lucky to live in such a beautiful place. 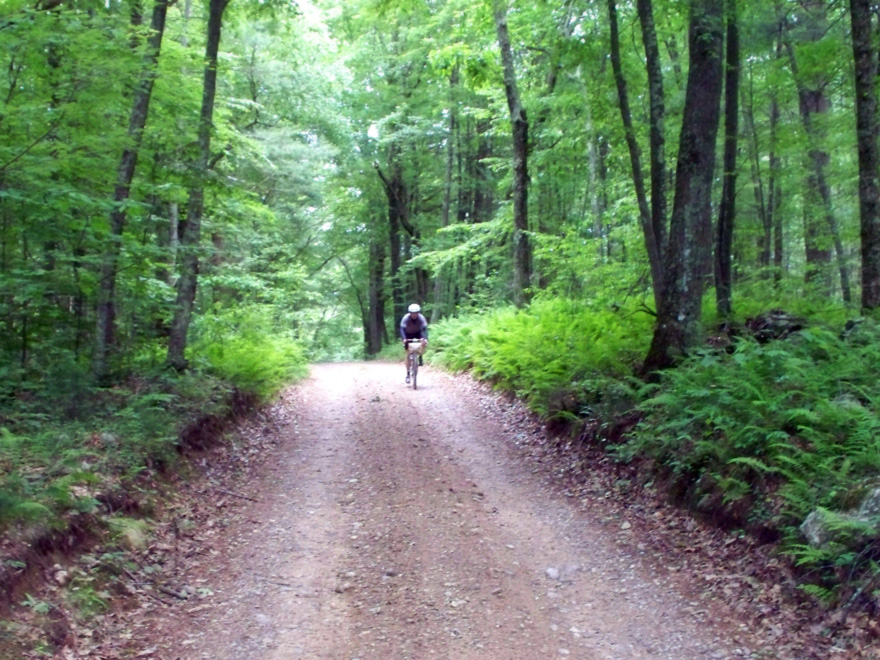 Riding my 650b bike in the 'Emerald Cathedral.' I find peace and a sense of well being when I'm on my bike, I'm proud of the work I do.