On Saturday, August 16, Ford and IDSA brought us the third panel discussion in a series on 'Designing Innovation.' We've been following along as the two organizations have brought together some of the biggest names in the design world to discuss and hash out real-life design topics onstage. While this panel's theme loosely focused around designing customer experiences, the four designers onstage took us into the inner workings of their own designing processes and shared the ways they incorporate their customers into the creation of their future products. Read on to see what Modern Edge CEO Austen Angell, Dell VP of Experience Design Ed Boyd and Ford Motor Company Exterior Design Manager Kevin George had to say on involving the consumer in today's design feats.

The Challenges of Customer-Led Innovation

The conversation began with a backgrounder on the panelists' respective companies and how each one approach predicting the future of design and technology. Seeing that all of the products have some sort of production timeframe, it's important for the design teams to nail down an idea and time it out to fit the needs of a group of consumers. Boyd shared some insight on the timeframe his team considers: "We look about three generations out and think about where technology will be and how will we solve these problems. You're looking at anywhere from six to ten years out." Ford's Kevin George discussed the practice of using consumer's own descriptions for the cars to lead future automotive design projects. When working on Ford's newest release, the Edge, two words stood out and informed the design direction of the recently launched car. "We take the words that they use to describe the car—some said dominating, some some accommodating. Very different. So we said, why don't we blend them?"

Finding the sweet spot in terms of a timeframe or design skeleton is one thing, but the real challenge comes with translating consumer insights into something innovative that the designers can stand behind. Angell had some words on designers' intuition that stuck with me for the duration of the panel discussion:

You need the rigor of academia, the rigor to have the proper amount of skepticism about your own assumptions, but we also recognize that there's part of the investigation that needs to take some risks. Designers have this intuition. It's marrying those two that we think produces some tangible results with the right amount of credibility that people can act on.

As exciting as it may seem, the toughest critics might be within company itself. "As a large company, if you talk about blowing things up, it's pretty challenging," says Boyd. "At Sony, we were holding on to legacy business, but I think today you need to be willing to blow that up in a really objective way. Every new idea that's very disruptive and different starts with a lot of anti-bodies before it's adopted." 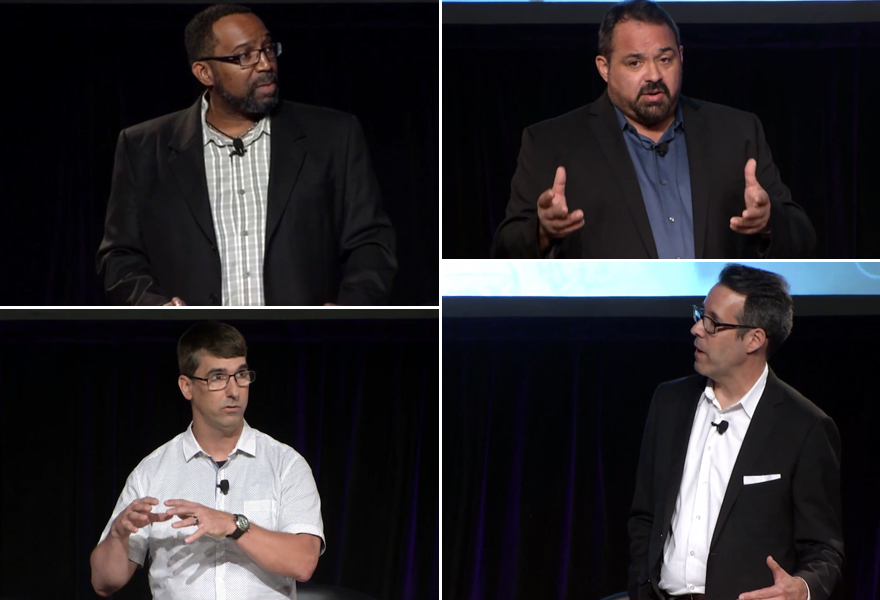 Once you have the feedback and the company is all in, where do you go from there? George shared one of Ford's methods on incorporating the customer into the design process with the audience: "After all the typical research is done, we send the designers to interact with the customers. We go in and say, these are the designers; they work on the car. Instead of reacting to their sketches, why don't you help them create a sketch? They get up out of their chairs and they're enthused again." It may seem risky in terms of efficient time usage and setting up expectations, but sending designers in to toss around design ideas with everyday car buyers has proven more than worthy of a practice. Before taking playing out their designs as physical models, the designers go back in and have another chat with the public. It turns out that these consumers know what to look for.

We went in with [a sketch] and used Photoshop and said, "What's wrong with it?" Someone said, "Well, the grill is too big." Now the grill is smaller. I mean, it's beautiful. They get it. It's amazing to me how astute these everyday customers are. We don't recruit people who are necessarily design aficionados. For some products, we recruit the average type of consumer who might walk in the dealership and they really really say things that are astonishing to me. "Well, the proportion of the sheet metal above the wheel makes the tire look too small." And we're like, how did you know that? The culture really does value design a lot more than they did when I first entered the industry.

George's sentiments on this transparency alluded perfectly to a point Angell made throughout the discussion. "It's all about getting away from the old world design of 'we're going to perform magic, stand back,' and into this new very collaborative, open transparent language," he said. "We've got a bag of concepts here and we're just going to dole them out like magic. But now the magic is this process of collaborating. It's much more transparent so words like faith and intuition are challenging. But every other single discipline, whether it's research or engineering, they have words like 'hypothesis.' So we often refer to concept sketches as hypotheses. We can take these and go and test them. The amount we test them is the amount of risk your company is willing to take." 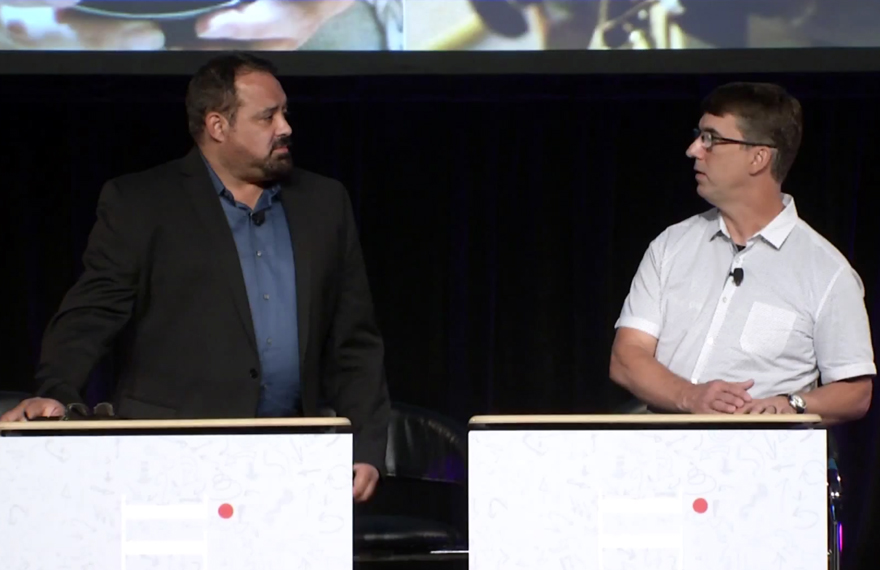 It comes down to knowing what the consumers want before they know in order to keep their involvement in the design process efficient and effective. Successfully predicting what's going to become a necessity in the panelists' respective industries was a hot topic throughout the discussion. Boyd had some words on the ever-evolving nature of tech design. "As a designer designing technology-based parts today, it's changing at that rate which sounds kind of daunting and confusing, but it's actually amazing because I was tired when I was younger of saying 'Well, one day we'll be able to do this...' Now it's happening so fast that I'm like, we'll be able to do this and we'll be able to do it in six years."

George shared a much more concrete version of the future, specifically citing autonomous cars from a question yielded from Boyd in the discussion: "There's been a lot of talk about autonomous vehicles," he says. "We have a lot of features now that are starting to bridge the space between you driving and the car driving. We have a collision avoidance system that we're testing right now. It was actually a part of the Edge concept. It's not on Edge production, but Edge production is going to have a collision warning system. It's using the sensors that you already have on the front of your car and a camera. It's looking down the road and if it's seeing anything that might become an obstacle, it starts tracking it. If it does see a trajectory that's going to be a collision, it starts warning you. The system that we had on the concept car will actually steer the car for you—brake, steer the car and put it back in the lane. It's amazing what that system that's in test development can do." 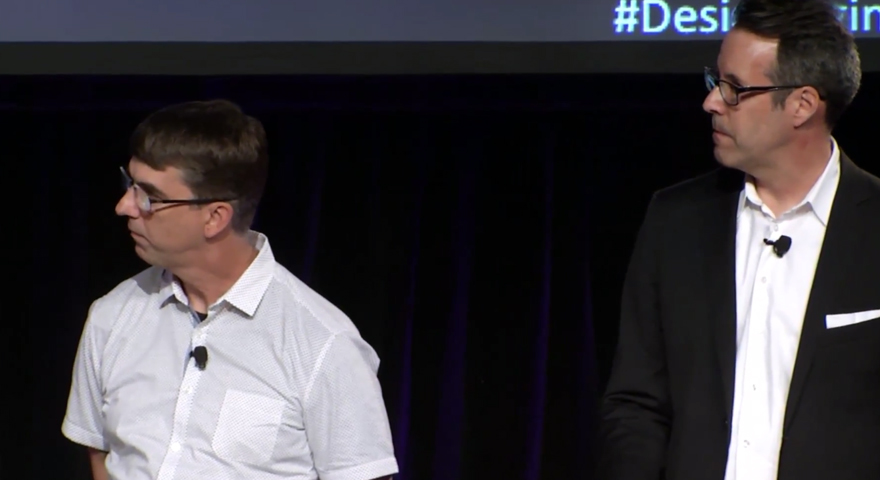 After hearing Boyd and George's thoughts on the future and what it holds for autonomous designs in terms of capabilities, Angell brought up an important player in the phenomenon: the driver. "One of the things that we found that when you take away the need for the driver to be the driver, it's not about what the people are going to do. It's really about what happens when the dynamic changes between the people and the car. All of the sudden it goes from one person being in charge, a pilot, who's in control and now you have an environment where the dynamic has shifted and people can choose to be completely democratic. That relationship is what I think is so fascinating about the opportunities that designers have to apply research."

And just as we've made the transition from a much more "magic" way of introducing design to completely immersing ourselves into the thoughts, suggestions and feelings of consumers, we're looking to a future where the the public will ultimately be playing a much smaller role in the actual function of their products. All we can do is wait to see what comes out of the woodwork—and offer our opinions as consumers whenever we have the chance.

If you missed out on the live-streamed discussion, give it a watch below and share your thoughts in the comments.