Beaming Free Info from Space: Geoff Baldwin On 'Outernet' and Why Code And Theory Does It All, Part 2 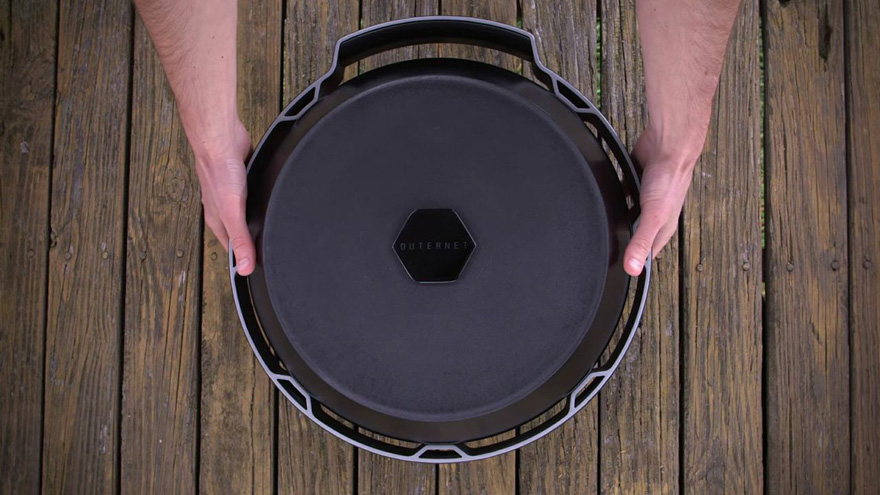 This is the second half of a two-part conversation with Geoff Baldwin, head of the new-ish Industrial Design department at Code and Theory. Read the first part here.

Geoff Baldwin: This whole industry, everywhere I've been, it's all about good people. Sayed [Karim], the founder of Outernet, I used to work with him at IDEO, where he was our tech guy, which is the best story ever: The IT guy at IDEO is trying to win a Nobel Peace prize! He was the best IT guy, he'd fix your computer super fast and was so responsive, because he just wanted to get done being an IT guy so he could go back to the shop and build shit.

I kept in touch with him, he went from IDEO to NPR to an investment firm that invested in news and information startups in developing countries. He was living all over the world and saw this problem: Yes, people need the Internet, but maybe they just need information. Back in March or February, I got an email asking if I knew anyone who could help him out with hardware. What he needed was a concept car and a vision. He was starting to get funding, but needed something tangible that people could hold onto and believe in. That's where it started.

Did C+T do the entire physical development of the Outernet?

Yes, and I think it should be understood that the project is still at a very gestational stage. [Sayed] is trying to do something incredibly ambitious that requires tons of capital and people being interested, so what we were doing here was creating that concept car and vision—if people can't get it in two minutes, they're not going to get it. But in order to create that concept car, we had to do some intense nuts and bolts engineering. We did this incredibly rapidly, as a six week project. Instead of staging it as the product, then the story and then... it was all at the same time. We brought Sayed in for a week, he was basically living with us. Sometimes we'd kick him out and he'd sit in the hallway and do... whatever he did.

He had collected so much knowledge about satellites and how they work, a ton of work on that back end, so we got him in and got his input on the technical basics and problems to solve and constraints. But in addition to getting a lot of hard information we also got the basis for the story. In a way the story, the fluffy-message fun part started to drive the really hard, critical engineering. 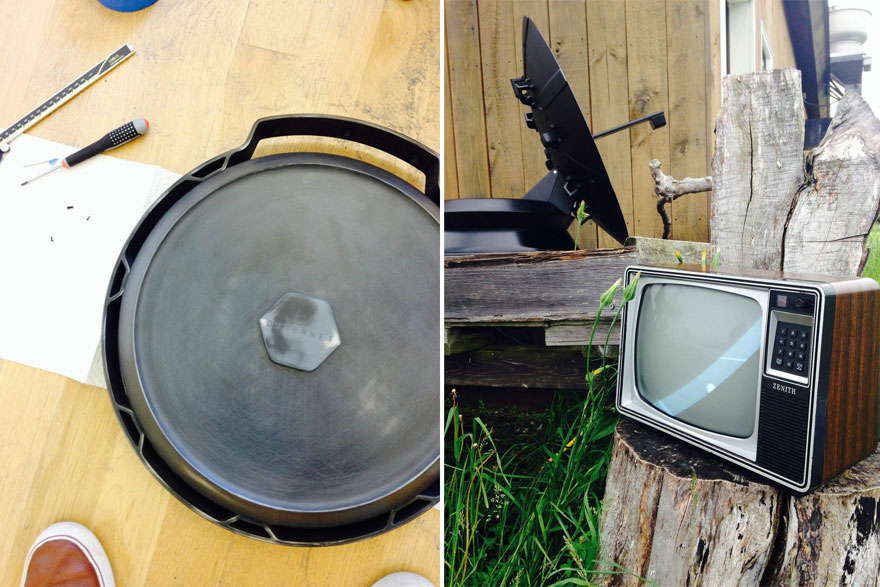 What's an example of the story driving the design?

One of the big conversations we had was "Does this satellite need to reposition itself?" to focus on a satellite over here versus over there. Early on, being a pragmatist, I was like "No! Just pick it up and point it."

This project has such a high ambition, to provide information to people who don't have it, to make information more democratic. You could drop these things in North Korea and people might learn that Americans don't eat babies. It could overthrow dictatorships! Amazing stuff. But what if you're a farmer in a rural, isolated part of Montana? I'm from Kentucky, where some people still don't have power. If you're a farmer in an isolated part of America, you use Outernet to get information about weather, to sustain your family and business, your kid uses it to do homework, and as a family you might use it to watch television at night. This hardware is how most of the world gets basic broadcast television. That humble use case told us, yeah, this thing does need to reposition itself. So now we need to account for that, so that the concept is based completely in reality, this isn't vapor.

At that point, we set out on a rigorous effort to figure out not only how we're going to fold this satellite dish up in a clever compelling, realistic way, but also how it will drive itself to reposition. We came up with some crazy stuff. There were two days where we were obsessed with making it into a balloon! Then we asked what happens when the wind blows... on earth, it might move by inches but in space it's missing by miles! So we came back to very pragmatic things. I'd walk around the office with [this prototype] and when people would ask what the hell it was I'd tell them "It's a satellite dish!" It's actually a vegetable steamer, but they had no idea because no one in NY steams their own vegetables. It became a big piece of inspiration for us for how we were going to collapse this dish. It was instantly a form we could draw from. It's super flawed—it isn't parabolic, these things are overlapping, it's not completely smooth—but it gave us a place to start, and let us build this [LATER PROTOTYPE].

This project started at the end of the winter, so all the sleds were on sale, so we took that shit apart and built a proof of concept for how we could use [that shape] and also make it parabolic. As we're doing this, we're figuring out the story, the story is driving the engineering, the engineering is starting to figure itself out, we're building out the mechanisms inside this thing because we don't need to but we have to. Eventually we start to end up with realistic-looking parts, and at that point the I.D., the physicality of the device, started to drive the way we'd film the video and script at the very end. Each moment fed on each other and had to happen together; otherwise the product and story wouldn't be cohesive. After designing as much as you can, the most important thing is making stuff. 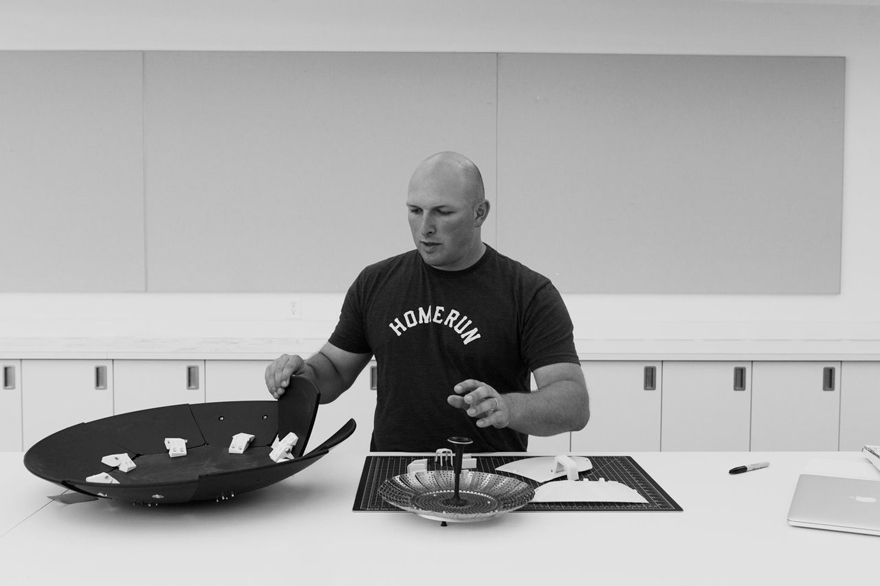 Any examples of that philosophy in your work at C+T?

Well, the relationship with Outernet is still unfolding, so there's that. One of our first projects after Comcast was a product called Prong [previously on Core77]. They developed a Kickstarter product, an iPhone case with flip-out prongs you can plug directly into the wall. They approached us after being successful on Kickstarter and fulfilling their orders after they began getting inquiries from big box retailers who thought their product was a great idea but thought it needed polish, some portfolio longevity. They came to us for two things: to redesign the product to address some user experience issues and aesthetics, and also pave a roadmap for new products for them. It was a moment where they went from a clever Kickstarter project, and became a real brand that can innovate around those insights.

We just recently were on the backend of that project with Prong, designing their new case. A key update on the new case is that you can remove and use the phone while the battery case is plugged in, which wasn't a feature on the old one. The first thing we did was guide them as a design partner, but for the last four months we've been acting as their manufacturing liaison with factories and partners in China. As we speak our lead Mechanical Engineer is downstairs doing parts analysis on first parts we just got back from China. Like I said: if you can't do all of it it's not worth it, if you don't make it don't bother! 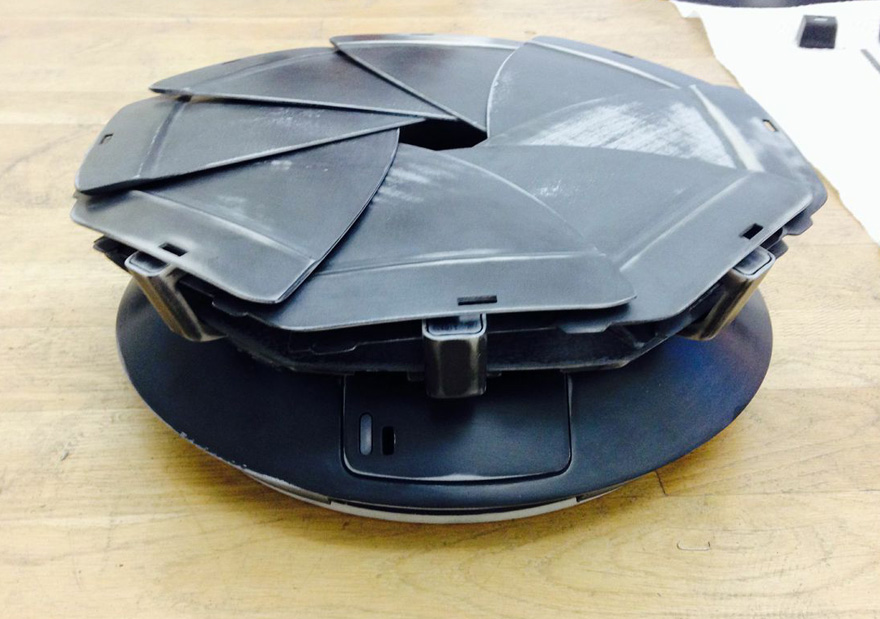 That becomes a gigantic process, what's your favorite part?

I remember when I was an intern at 19, I realized only 10% of my time was spent sketching sexy shoes, and the 40% up front is figuring out what to work on, and the other 50% back-end was making sure it turned out the way you wanted. To do the cool sexy part, you have to embrace the hard parts, so I've come to love all of it in some maybe masochistic ways. The thing I like the most is doing things everyone else does in ways they haven't before. Whether it's designing a commodity like nail polish or starting an industrial design group, doing it in a new way.

A lot of the industrial design firms I've worked with have added digital people, there's a realization that "Oh shit, all our products have screens, we should get behind those screens." But ironically that pendulum hasn't really swung back, digital groups aren't thinking about the fact that all their work has physical touchpoints and they should get hardware guys. To me they're equally interesting.

At CES last year I was talking to Scott McManigal, the Vice President of Design at Vizio, and I remember telling him, "It's crazy that Code and Theory might want to design a tablet for you—but everyone working downstairs on the projects we've traditionally worked on over the last decade have shaped the ways people use your product!" By adding some veterans like myself, we become viable for handling those projects in a totally different way. And then we're working with Burger King about food innovation! We're not doing traditional work for boutique start ups or traditional industrial design work. Completely divergent from digital topics. It's in every direction possible and it's really exciting.

Everything is a product we can make.

Beaming Free Info from Space: Geoff Baldwin On 'Outernet' and Why Code And Theory Does It All, Part 2