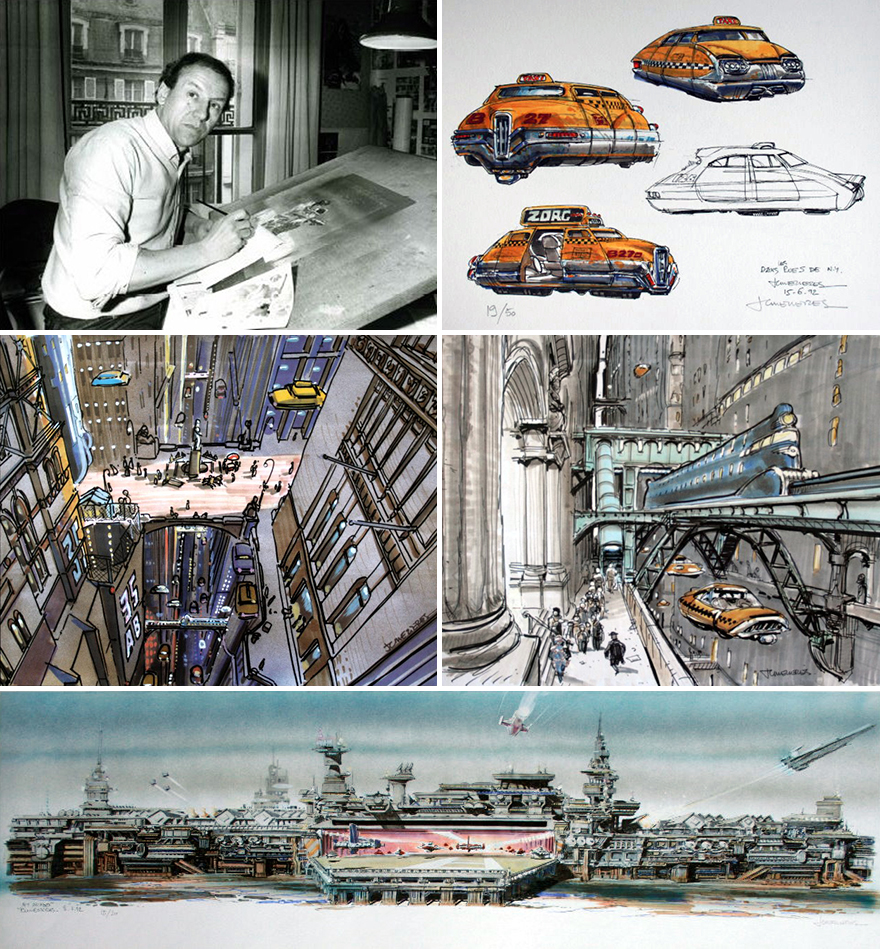 When you think of knockout sci-fi concept designers, you probably think of Syd Mead and/or Doug Chiang. Between Blade Runner, Tron, Terminator 2 and the later Star Wars films, both men have gotten their due. Their names also ring a little sweeter to us because both majored in Industrial Design, Mead at Art Center, Chiang at CCS. But for fans of this genre, there's another man whose name you may not know and whose work you should look at: Jean-Claude Mézières, whose background was not in industrial design but in illustration. And if you have seen the original Star Wars trilogy, you have seen the largely uncredited influence of his work (further down in this entry are the most egregious examples).

Mézières' background is as wonderfully confusing as it is interesting: Born and raised in Paris of the 1930s and '40s, entered an art academy at the age of 15. After graduation he did two years in the French army, seeing action in Algeria, and briefly worked as an illustrator upon his discharge. Then he became so fascinated by the American West that he hitchhiked across America in the 1960s to fulfill his lifelong ambition of becoming an actual working cowboy in Utah.

After wrapping up his cowboy gig and American adventures, Mézières returned to France—and started an influential science-fiction comic book, at a time when sci-fi was about as popular in France as being a hitchhiking cowboy was.

But Valérian and Laureline, the series Mézières started with childhood friend Pierre Christin, became wildly popular. It followed a time-traveling "spatio-temporal" agent and a female medieval peasant, cruising around having adventures in the 28th Century. Begun in 1967, it developed into a "space opera" with clear influences on Star Wars (as fanboys like this one and that one will tell you). 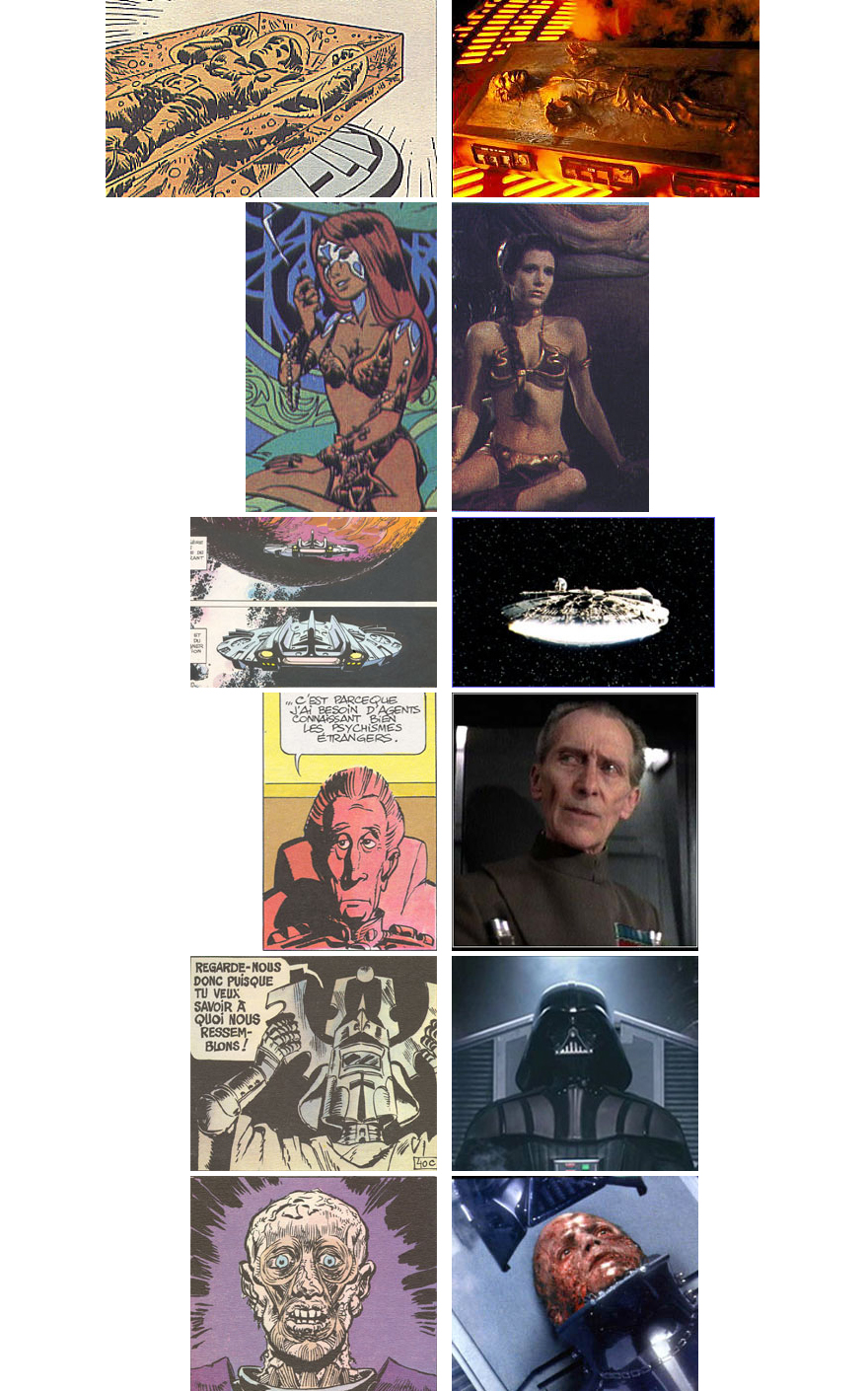 Valérian and Laureline continued for decades. One fan of the books was director Luc Besson, who contacted Mézières in the '90s to create renderings of a futuristic NYC for a movie project. The renderings reportedly inspired the production design of The Fifth Element, which heavily features the flying taxis drawn by Mézières for one of his Valérian books. 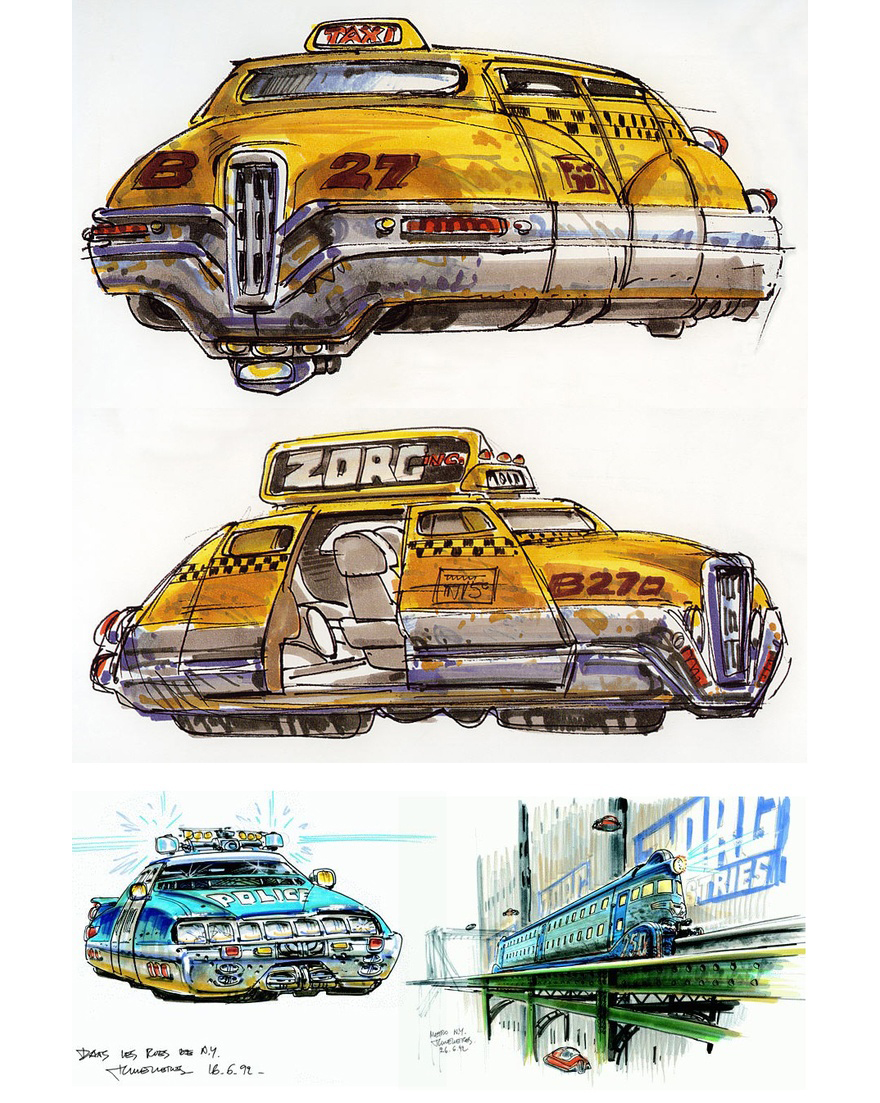 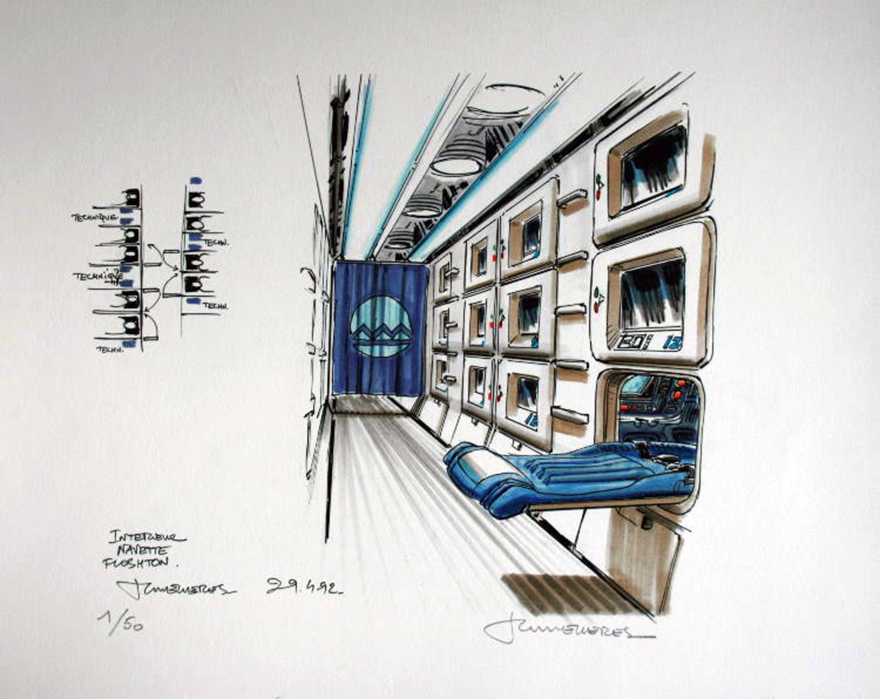 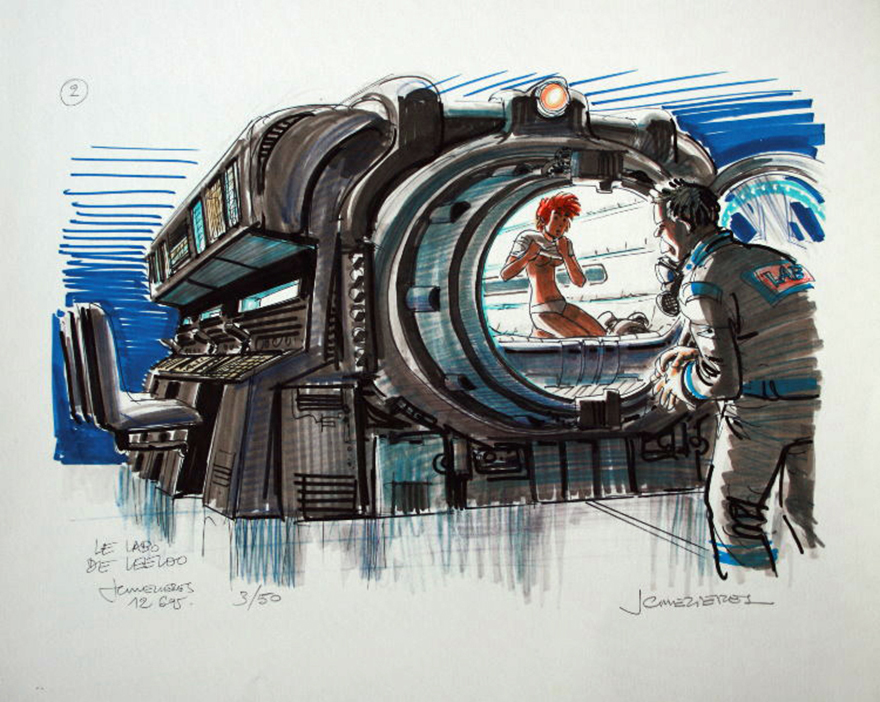 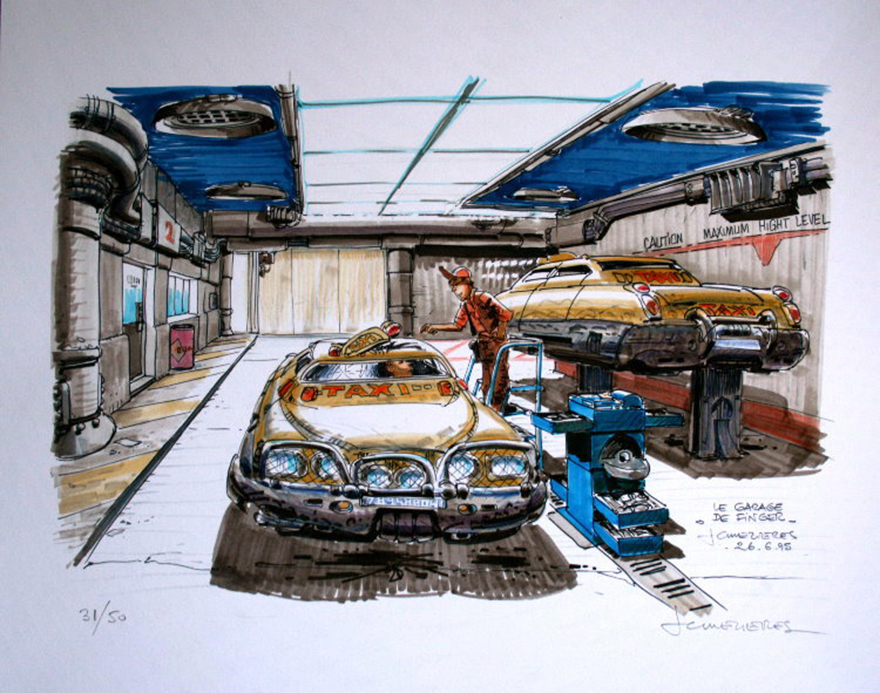 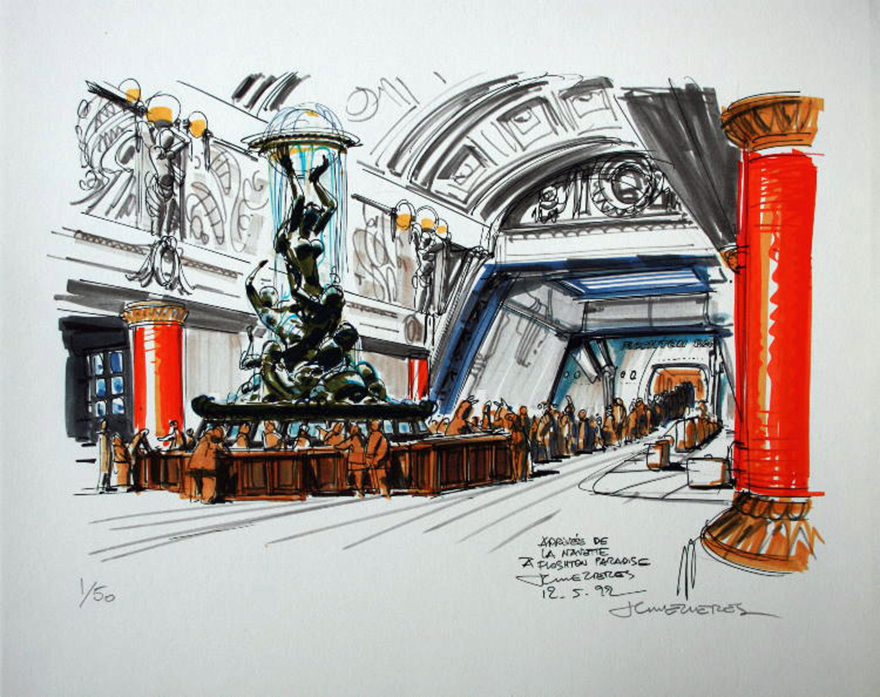 But Mézières was not hired as the production designer, and instead seems to have served only as an uncredited concept artist. Hollywood never came knocking on his door. Nor did Star Wars fans ever really give him a nod for his influence, nor hear of Valérian and Laureline.

In 1983, after having seen all three of the original Star Wars flicks and a fair bit of what he had inspired, Mézières released this single-frame comic in the French magazine Pilote. Sharing a table at a Star-Wars-Cantina-like bar are Princess Leia and Luke opposite Valérian and Laureline. 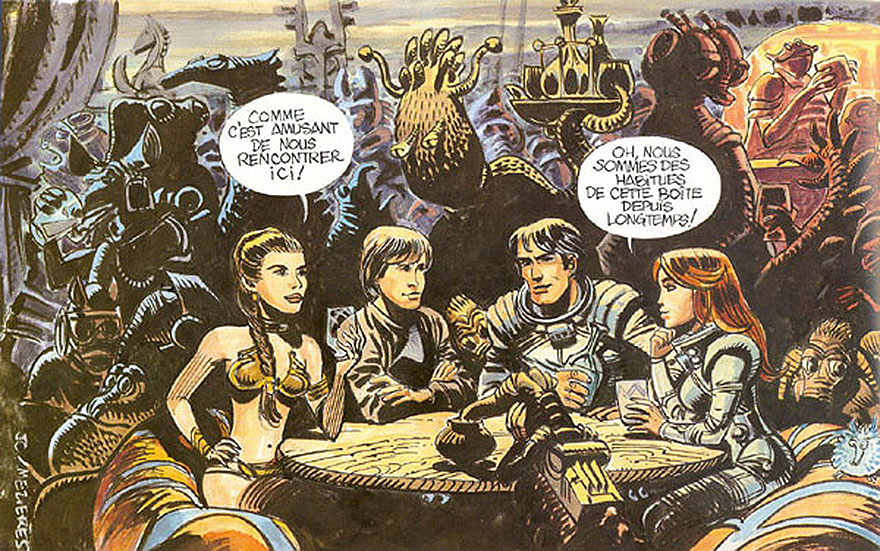 Laureline: "Oh, we've been around this place for a while."