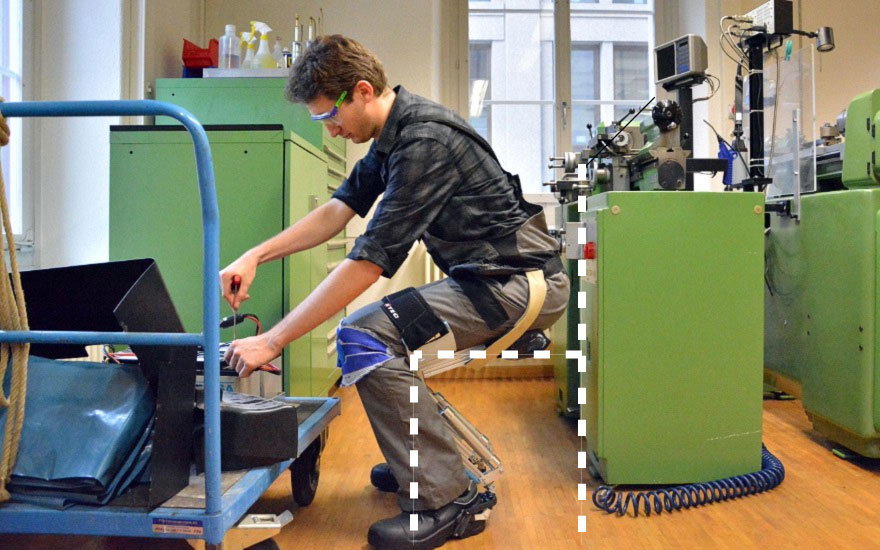 Editor's Note: A commenter referred me to Darcy Bonner's wearable chair, which inspired a brief history of this typology via the USPTO.

As anyone who has worked a job that requires long bouts of standing in one place knows, remaining upright for an extended amount of time takes a heavy toll on your legs and back, yet the best solution that we've come up with is the uninspired standing mat... until now. Some are calling it an invisible chair, while others are going with bionic pants—a matter of semantics, perhaps, but considering that the chair is a canonical example of industrial design, it's worth examining where exactly Noonee's "Chairless Chair" fits in the grand scheme of things.

"Based on robotic principles of Bio-Inspired Legged Locomotion and Actuation," the exoskeletal assistive device consists of a pair of mechatronic struts that run the length of the user's leg, with attachment points across the thighs and at the heels of the user's shoes. Hinged at the knee to allow for normal movement—viz. walking and running—its core innovation is the battery-powered variable damper system that can be engaged to direct body weight from the legs to the heels of one's feet.

Of course, the Chairless Chair is intended not for us deskbound office peons but for environments in which workers must stand in one place for long periods, if not entire 8-hour shifts. As the story goes, 29-year-old Keith Gunura was inspired by his experience working in a packaging factory in the U.K.; now, a decade later, he is the CEO and founder of Zurich-based Noonee. CNN, which duly notes the precedent of the one-legged Swiss milking stool, sums up these workplace health concerns (as does the Noonee website):

Physical strain, repetitive movements and poor posture can lead to conditions called Musculoskeletal disorders (MSDs), which are now one of the leading causes of lost workday injury and illness. In 2011, MSDs accounted for 33 percent of all worker injuries and illnesses in the U.S. with over 378,000 cases, according to data from the United States Department of Labor. In Europe, over 40 million workers are affected by MSDs attributable to their job, according to a study entitled Fit For Work Europe and conducted across 23 European countries.

Noonee's flagship product is reportedly going into trials at the likes of BMW and Audi later this year, but the use cases of the 5lb device (each 'leg' weighing in at 1kg) go far beyond the production line. (Insofar as it is intended for a broad audience, the device doesn't fills a different niche than, say, Ekso Bionics' robotic exoskeleton.) More portable than any stool or chair, less obtrusive than a walker and more supportive than those folding seat-canes, the Chairless Chair represents a heretofore unexplored intersection of paramedical assistance, ergonomics and, yes, wearability. 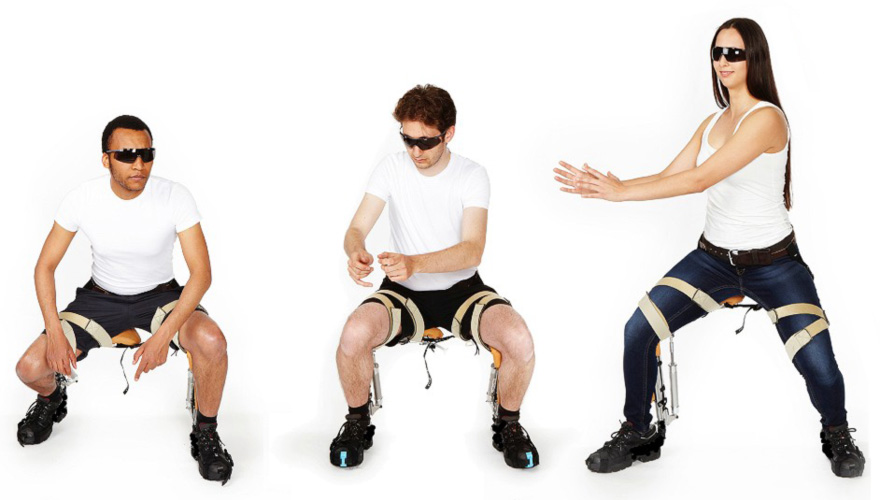 The point is that it's not so much an article of furniture but a seat—the seat of your pants, as it were—which is exactly what people are looking for when they want a chair. Thus, the misnomer is not only a good PR move but a subtle point about what design is: solving problems, as opposed to just making things.

See also: Who Knew? The Wearable Chair Was Actually Invented 37 Years Ago