Who Knew? The Wearable Chair Was Actually Invented 37 Years Ago 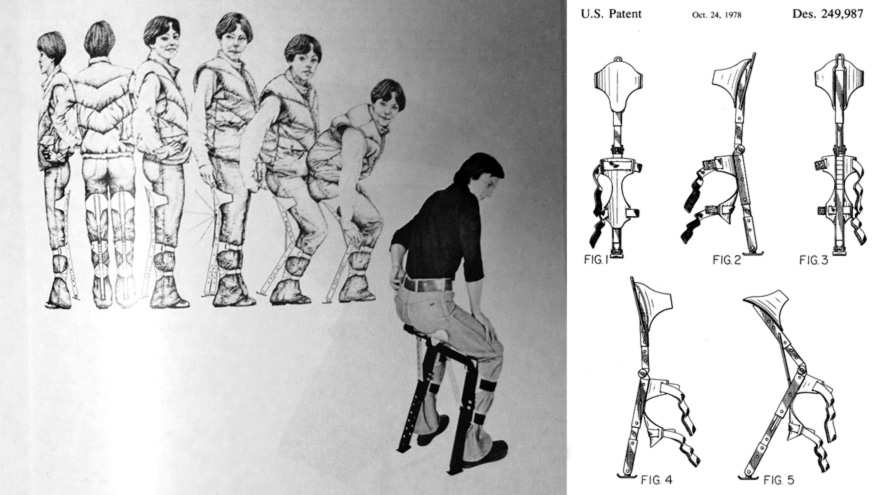 So it looks like the honor of Design Crossover Hit of the Week goes to Noonee's Chairless Chair, and while the mainstream media took to hailing it as a futuristic exoskeletal paramedical breakthrough, it so happens that the basic idea dates back to the late 70's. Upon seeing my post about it earlier this week, eagle-eyed reader Gary Cruce sent a note with a photo from an old exhibition catalog, indicating that the product may well have been invented several decades ago. "I doubt Noonee was aware of this earlier concept, but they may want to know of it as they work to take the product to market," Cruce writes. "The exhibit was at the Kohler Arts Center (yes the toilet company) in 1978, based in Sheboygan, Wisconsin. That show featured many studio furniture pieces including selections from Sam Maloof and Wendell Castle." Along with the image and anecdote, Cruce provided an all-important snapshot of the caption from the catalog; crediting the "Wearable Chair (1977)" to Darcy Robert Bonner Jr., it reads:

The "Wearable Chair" consists of two identical "chairs," one strapped to each of the wearer's legs. Bonner states that "It is important for the 'Wearable Chair' to be adjusted to each user. Just like a piece of clothing, if the chair doesn't fit, it will not feel good. When adjusted correctly, you can comfortably relax with all your weight on the chair.

"With the lower member of the chair strapped to the calf, a spring presses the upper member against the back of the thigh. As the user squats, the released compression bar pushes the leg of the chair to a locked position, thereby supporting the body. When the user rises, the lower member is unlocked and is retracted by a spring to its original position, where it will not interfere with the user's movements."

Curious to learn more, a de rigueur Google query revealed that Darcy Robert Bonner had actually filed a patent for his invention, which inspired this "more-than-you-cared-to-know" history of the wearable chair—a bit of rechairche du patents perdu, if you will—gleaned mostly via the USPTO (though tangential sleuthing reveals that one Darcy R. Bonner now heads up an eponymous architectural practice in Chicago). 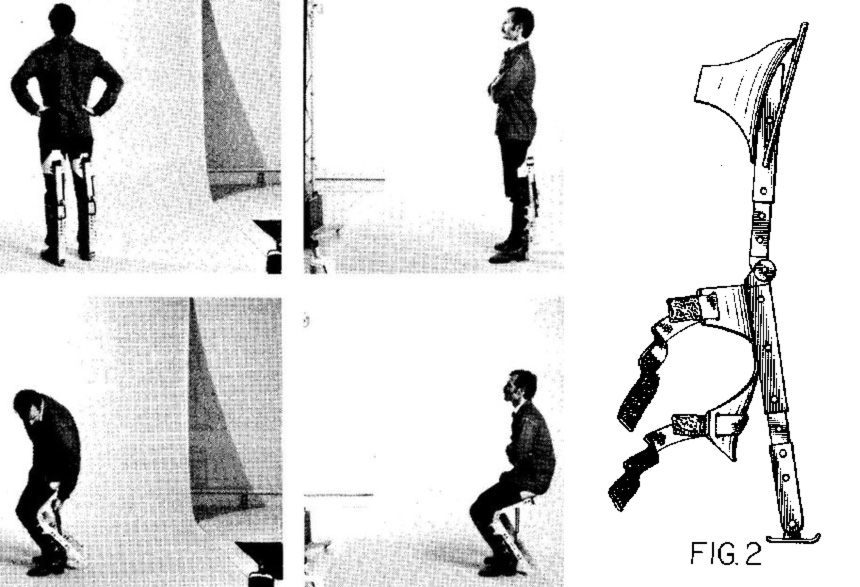 The original patent is simply entitled "Wearable Chair," which also happens to describe Noonee's product. Filed in 1977 and granted as D249,987 in October 1978, Bonner's initial design patent is described in Twitter-friendly terms as "the ornamental design for a wearable chair, as shown and described." Although this first iteration briefly resurfaced in the post-Google era in 2008, when the images above made blog rounds, it turns out that Bonner subsequently filed a second patent, US4138156 A, granted in Feburary 1979, which is far more detailed in tenor and scope. Where the former is classified as a "footed," "collapsible or folding" article of furniture, the latter is subject to an entirely different taxonomy of patent-worthiness. US4138156 A is a "device for supporting the weight of a person in a seated position including chairs, seats, and ancillary devices not elsewhere classifiable," specifically a "portable bottom with occupant attacher" (Subclass 4) with "occupant-arising assist" (Digest 10). (In the interest of due diligence, there are 148 patents in the former subclass and 353 in the latter; Noonee's Chairless Chair does not appear to be among them. Fun fact: "Digests" [denoted by DIG followed by a number] are considered secondary subclasses, which are used for indexing purposes only, i.e. as meta tags.) 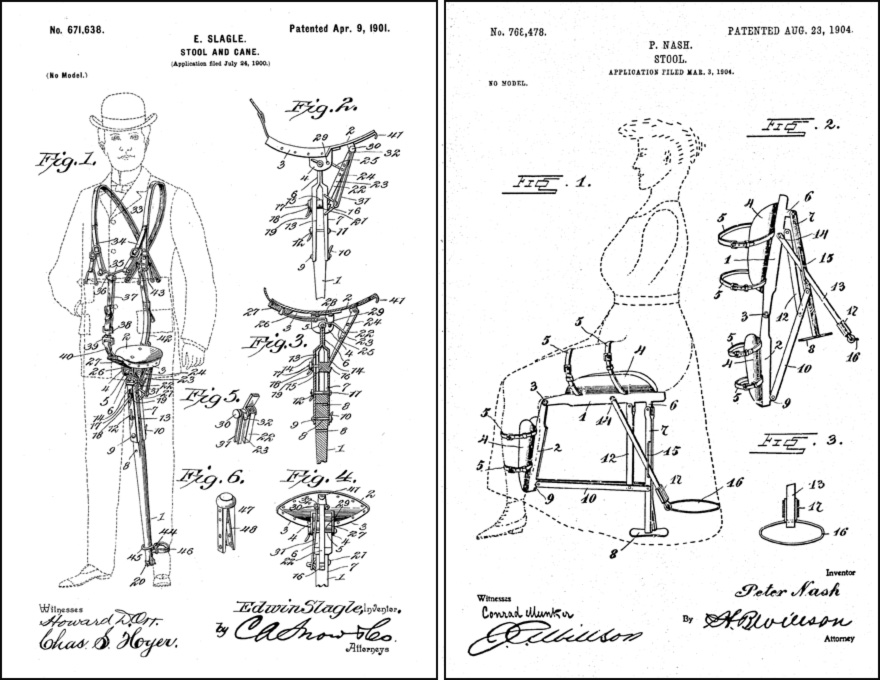 The U.S. Patent Office being the accessible archive that it is, I was curious to explore the prior art (extant patents that are interpolated in the one at hand) for the second patent, including a sort of ejector toilet seat (1953)—the schematic evokes a prank but it is of course an assistive device—as well as a couple of long superannuated patents: an extremely elaborate 1901 "Seat and Cane" (above left) and a 1904 "Stool" (above right). As kinky as the former device looks, it's actually intended for the very same purpose as the Wearable and Chairless Chairs, though it should hardly come as a surprise that humans have suffered from extended periods of standing since the dawn of industrialization. Per the OCR'd 1901 patent:

This invention relates to a combined stool and cane; and the object of the same is to provide simple and effective means for supporting a person while at labor or during the pursuance of those classes of vocations requiring an upright or standing posture or for other purposes, the improved device being in connection with supporting devices on the person of the user and transportable with the latter from place to place without interference with the free movement of the person carrying the same...

I was also interested to see that Bonner's patent 4138156 was cited as prior art for handful of Nike patents. I'll admit that my armchair investigation was summarily scuppered by the itemized technical jargon of Patent No. 7591919 ("Fluid-filled chambers with foam tensile members and methods for manufacturing the chambers") and the rest, though I would gladly be enlightened by anyone who can parse the legalese. 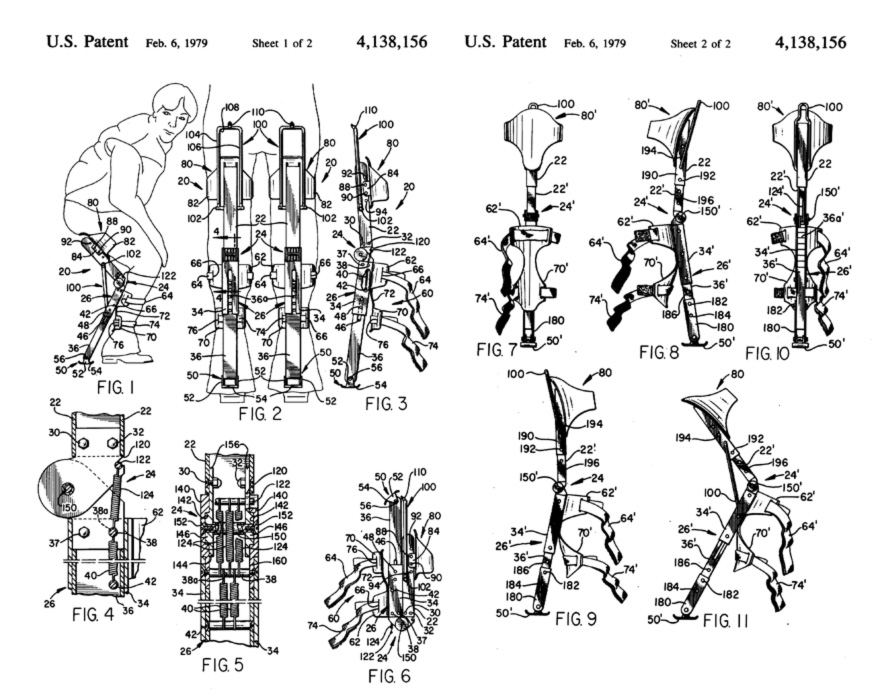 But I digress. As you can see in the images above, Bonner's 1979 "Wearable Chair" patent includes both a heavily annotated version of the drawing from the original design patent (right) and several additional depictions the mechanism of the spring-loaded "brace member" (left), which is explained in great detail. Meanwhile, the "Background of the Invention" section sets a clear precedent for the advantages and use cases of Noonee's Chairless Chair:

Numerous occupations and recreational activities require long periods of standing or use of the legs but do not readily permit the use of seating structure on which an individual can rest. For example, assembly line workers who must have freedom of movement from one workstation to the other normally have no ready access to a chair or other seating support during intermittent idle periods between work projects. Also, where seating is provided, it is usually not readily accessible to the worker but rather is located out of the immediate work area.

The same absence of any seating exists in numerous sporting events where the spectator or even the participant must move from one location to the other. For example, while observing a golf tournament or other similar event, a seating structure would be desirable but has not heretofore been practical. Also, hikers and campers having generally done without the luxury of seating simply because of the added inconvenience or the inability of carrying a chair in addition to other equipment.

Thus, a need has arisen for a simple and lightweight body support which is readily accessible to the user but which does not necessarily have to be hand carried.

Of course, Bonner's patents are long expired by now, and nor should these revelations detract from Noonee's mission in the least. After all, their innovation certainly has more to do with the actuated damper system—the startup reportedly "spun out of the NCCR Robotics lab at engineering university ETH Zurich"—than the concept itself, not to mention the incremental improvements in lightweight materials such as carbon fiber. That said, I'm a bit out of my element as it is, and I wouldn't know where to begin when it comes to plunging the depths of Geschmacksmuster, so keep those tips comin'.

Who Knew? The Wearable Chair Was Actually Invented 37 Years Ago