A Vibrating Fork, and an Anti-Vibration Spoon. Which Would You Rather Have Designed? 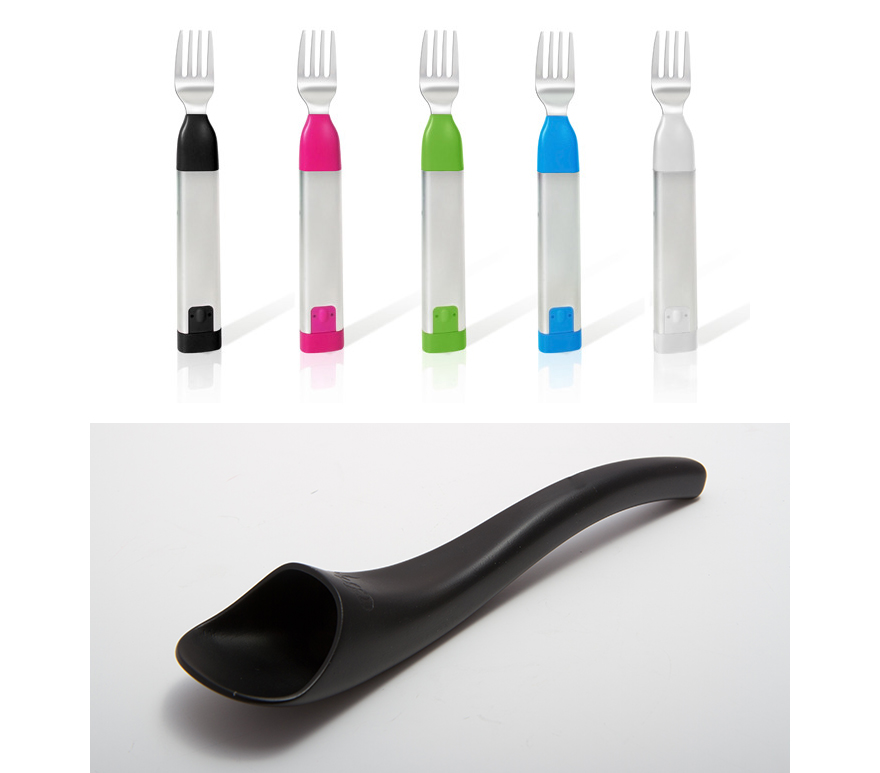 The phrase "First World problems" was trenchant the first time I heard it. Now five years later, with everyone braying it and hashtagging it as the laziest of punchlines, it irritates me. But I guess it won't go away, and that's partially because of objects like the Hapifork and the people who patronize it.

That ridiculous piece of silverware is supposed to help you "eat healthier, eat slower and lose weight by eating at the right time and at the right speed." The freaking thing senses when it's in your mouth, then silently counts off the seconds until it's in your mouth again; eat too fast, and it vibrates to remind you to slow down. It was successfully Kickstarted last year and is now in production. (You can read a New York Magazine article here from a writer test-driving one.)

Meanwhile, Glasgow-based ID firm 4c Design is working on an actually useful eating utensil. Working closely with a gent named Grant Douglas, who has "a combination of ataxic and athetoid cerebral palsy [that] has affected my hand control, speech and walking pattern since birth," 4c designed the S'up Spoon, whose particularly ergonomic handle and deeper bowl are meant to ease mealtimes for those with hand tremors.

"Eating in a restaurant would just be unthinkable before," Douglas told Design Week UK. "[The S'up Spoon] is a major breakthrough. I can eat Chinese with two portions of rice as well as ice-cream totally independently and with very little spillage."

Grant shares what his experience prior to the S'up was like, and why this design is a game-changer:

...Apart from people's attitudes, one of my biggest challenges has been eating, especially with a spoon; I have extremely limited use of my right hand and the level of control over my left hand is nothing like what non-disabled people have. I can manage to get whatever I want on to a spoon but by the time I get the spoon to my mouth the food is either on the floor, table, wall - anywhere apart from on the spoon. I can just about manage things like ice-cream or moist cake as they 'stick' to the spoon, but cereals, soups, peas and corn are literally impossible, especially when eating out. This has limited my choice in restaurants, prevented me from eating certain things at home or relying on others to 'feed me'. I hate being fed as you have little or no choice in what order you eat things and the only other people who are fed are babies or toddlers.

...Two days before Christmas I visited the 4c workshop and [4c industrial designer Mark Penver] gave me two prototypes of what is now the S'up Spoon. These prototypes have enabled me to have soup (on Boxing Day I had a whole bowl of soup without spilling a drop); my breakfast has changed from toast/crumpets to Weetabix; and I can enjoy a hassle-free Chinese with my friends. These are but a few ways that the S'up Spoon has changed my eating habits.

Realising the difference the spoon has made to me, the design team have decided to try to make it available to anyone who could benefit from it; we think it could help anyone who has unwanted hand/upper body movements including those with Parkinson's disease, strokes, or those who have less control due to age.'

The S'up Spoon is now up on Kickstarter:

There are still 28 days left to make the S'up Spoon happen.

A Vibrating Fork, and an Anti-Vibration Spoon. Which Would You Rather Have Designed?