Earlier today, connected device guru Matt Webb announced the closure of cloud service developer Berg Cloud in a blogpost, citing difficulties in finding a sustainable business model for the innovative venture since moving away from the agency model back in 2013. Conceived after experiencing the difficulties of making connected products first hand, the vision of the ambitious Berg Cloud had been to create cloud services that would make life easier for hardware innovators—effectively serving as the missing link between the wireless chip in a new connected device and a user-facing website or smartphone app.

The Little Printer—perhaps the most iconic of Berg's creations—also looks to be implicated in the sad news. Closure of the service behind the product, the release reports, could come as soon as March 2015 unless a suitable buyer can be found. Fortunately for fans and owners of the diminutive device and the wider technologist community, the announcement also suggests that the code for the Little Printer could be opened up—no doubt to the delight of legions of hackers and tinkerers. 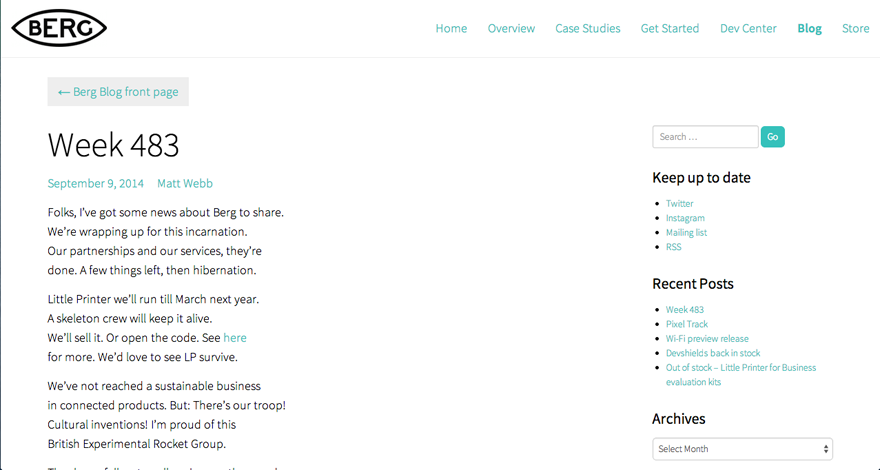 Whilst the sad news concedes defeat—surrendering to the difficulties of an industry still in its infancy—the release pays passing but heartfelt homage to collaborators and pauses to reflect on the modest triumphs of the venture. Although we have to feel sorry for the guys (Webb and his partners Matt Jones and Jack Schulze), who couldn't get the numbers to balance, the inventions and explorations of the group will no doubt shape the future of the Internet of Things—or indeed the 'Internet of Everyday Things' as they liked to call it.

In February of this year, Berg Cloud released Cloudwash—a prototype of a hacked, connected washing machine with mobile app powers such as detergent ordering, user notifications and customisable timings and presets—to a mix of critical acclaim, curiosity and controversy. More recently in May, the team shared their proof of concept for 'Pixel Track', an extremely low-power connected display system for public spaces employing delightful looking and sounding 'mechanical pixels'.

We bid a fond farewell to Berg's intelligent explorations of connected culture, but rest assured we're eagerly anticipating the next big thing from this inspiring studio—wishing them well.