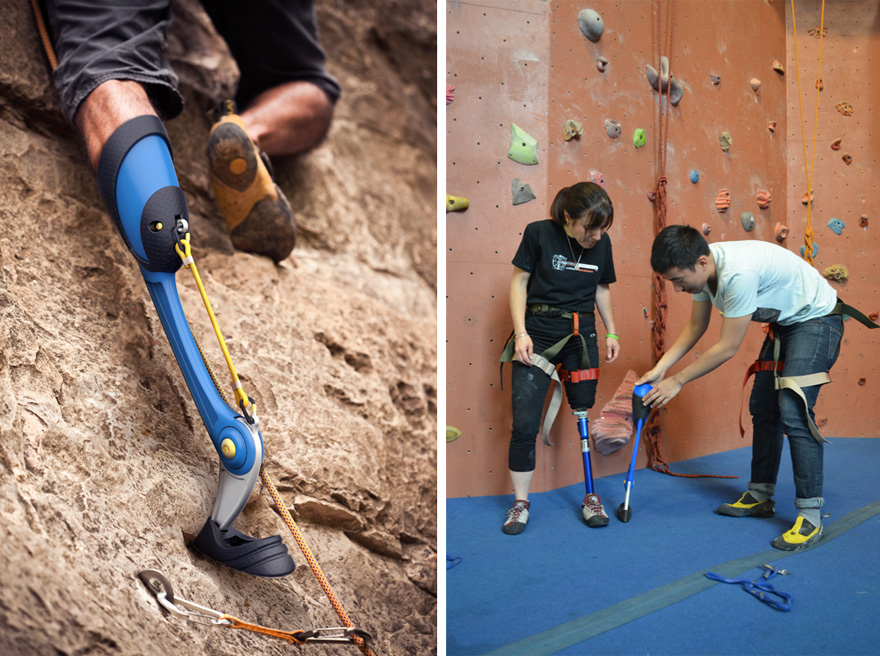 Last February, Kai Lin was watching YouTube videos of mountain goats jumping up a vertical mountain side when he was struck with an idea. Lin, now a senior at Pratt Institute, was enrolled in a prosthetic-design class at the time, and he wondered if the same anatomy that allowed the goats to so swiftly and accurately scale the vertical surface could be applied to humans.

This was the beginning of KLIPPA—the name is Swedish for "cliff"—a prosthetic leg designed specifically for amputee rock climbers. With the seedling of the idea in mind, Lin dug deeper into the anatomy of mountain goats, learning that their hooves have small cupped surfaces that create suction, coupled with a hard outer shell that allows the goats to stabilize their bodies on even the steepest surfaces. Looking for design opportunities, the student stumbled upon the documentary High Ground, which tells the story of 11 veterans who heal mental and emotional trauma during a 20,000-foot Himalayan ascent. Lin also discovered that rock climbing was the first choice of physically demanding sports for veteran amputees looking to maintain an active lifestyle after returning from Afghanistan or Iraq. "I realized from the demographic of amputee patients that quite a few of them are wounded soldiers coming back from Iraq and Afghanistan, and many of them suffer from physical and psychological trauma," Lin says. "That just gave me more reason to design something meaningful—not only for day-to-day patients but for someone who might use my rock-climbing prosthetic legs to help with their recovery process." 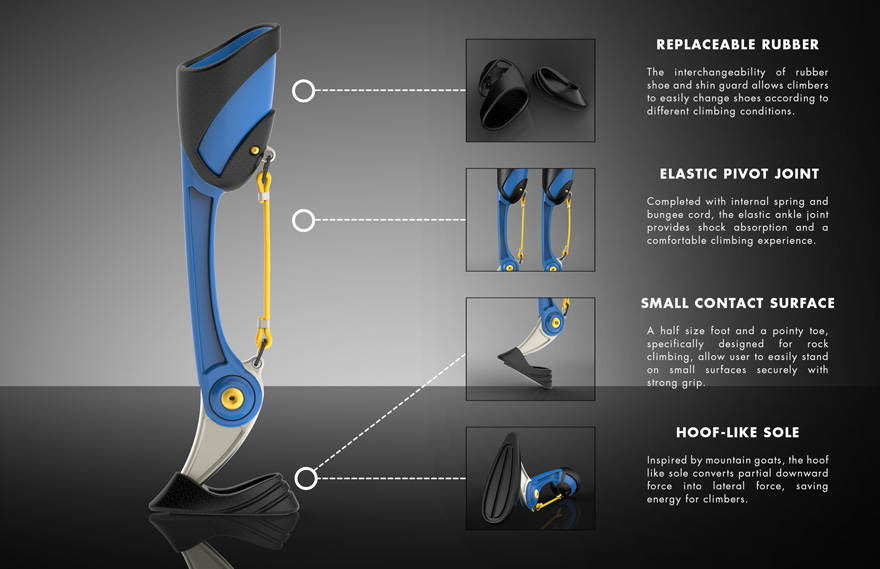 Further research took the product design student to Brooklyn Boulders, a local climbing gym, where he interviewed experienced climbers about their technique, ankle articulation and muscle use. Lin took to the wall to give it a shot himself, attaching blue foam stilts to his feet to understand what it was like to climb without sensory feedback. Creating a series of blue foam stilts varying in surface size, Lin tested the ideal size for a prosthetic. "What I found was that when a [foot] surface is too big, it blocks you from seeing what is underneath and it becomes hard to step," Lin explains. "But when the contact surface is too small, you lose your balance." He created three main sizes of stilts in proportion to a human foot—full, half and quarter—discovering that the ideal solution was somewhere between a half-size and quarter-size foot, which limited the contact surface while still maintaing balance.

Lin synthesized this knowledge in a series of (really awesome) sketches, working to incorporate his research along with other identified problems amputee climbers face like strength loss, passive articulation, and a lack of sensory feedback and grip. The first iteration of sketches for KLIPPA was a direct biomimetic approach pulling inspiration from mountain goats, while his second series echoed a more human feel. From these sketches, Lin made five prototypes from blue foam and 3D-printed features like textured heels, hoof-like feet and rubber shoe encasings. His final design took the best pieces from each of these prototypes, resulting in a progression of human to goat anatomy moving down to the foot. 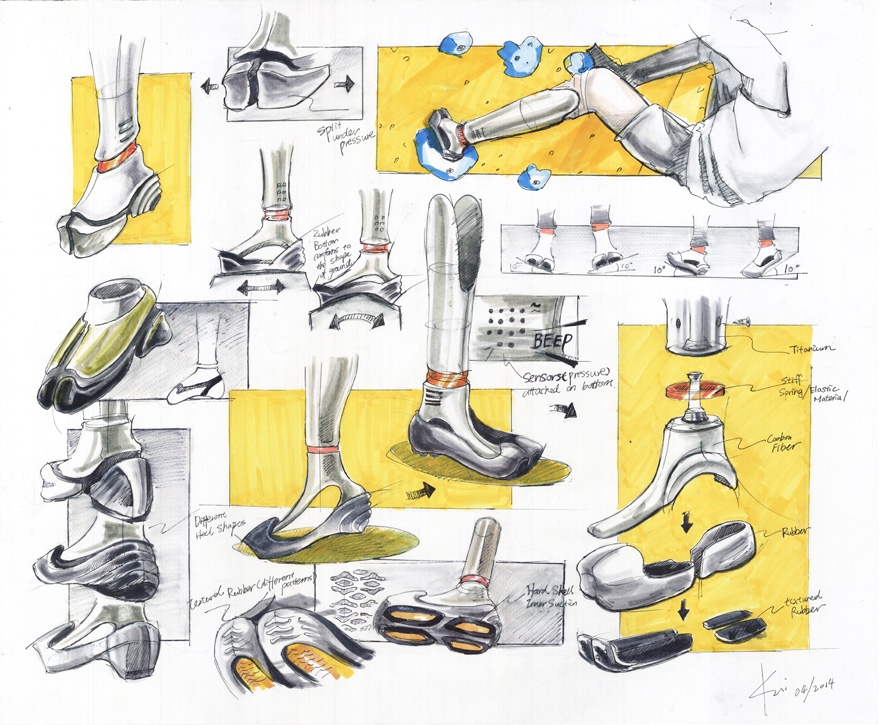 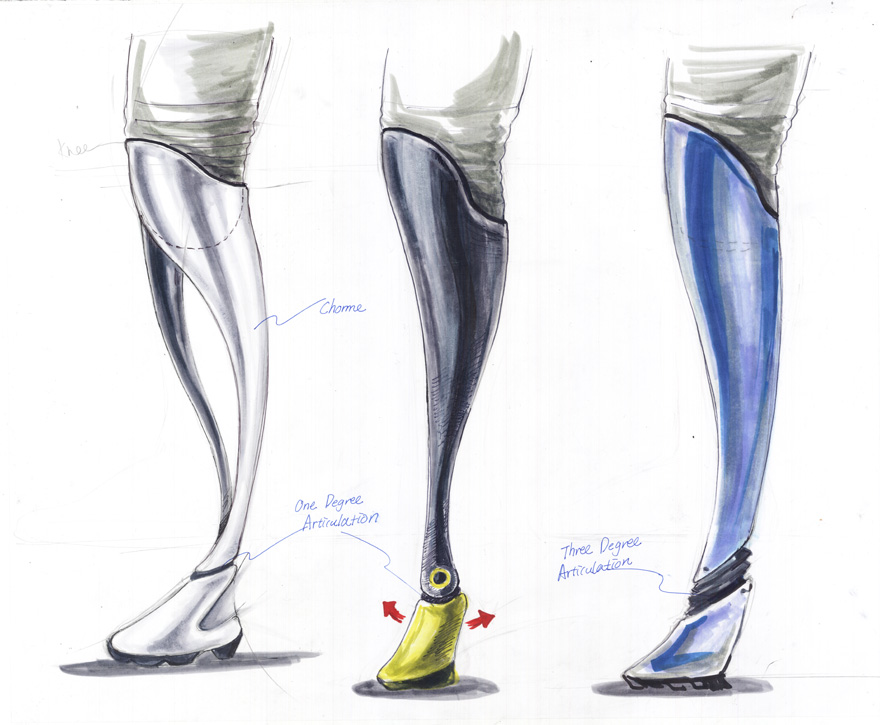 At the foot, KLIPPA tapers to a tiny, pointed toe. "This pointy toe is not just for aesthetics," Lin says. "A small pointy toe also helps climbers to wedge their foot into little cracks, so that they can stabilize themselves when climbing." The heel of the foot is slightly textured, with small indents and a hoof-like sole, which aids in stabilizing the climber. The wider heel also allows more stability when standing or walking. Additionally, an elastic pivot joint with an internal spring and bungee cord provides shock absorption and helps with ankle articulation during the climb.

The final design for KLIPPA was modeled in SolidWorks, allowing Lin to give it the shape and aesthetic he wanted. The student bought screws, bungee cords, and nuts and bolts online to ensure his final model would work with existing hardware. Lin then CNC-milled the main body of the prosthetic from MDF, sanding and painting it for a "looks-like" model. The foot of the prosthetic was 3D-printed on a Stratasys Dimension Printer in PLA. 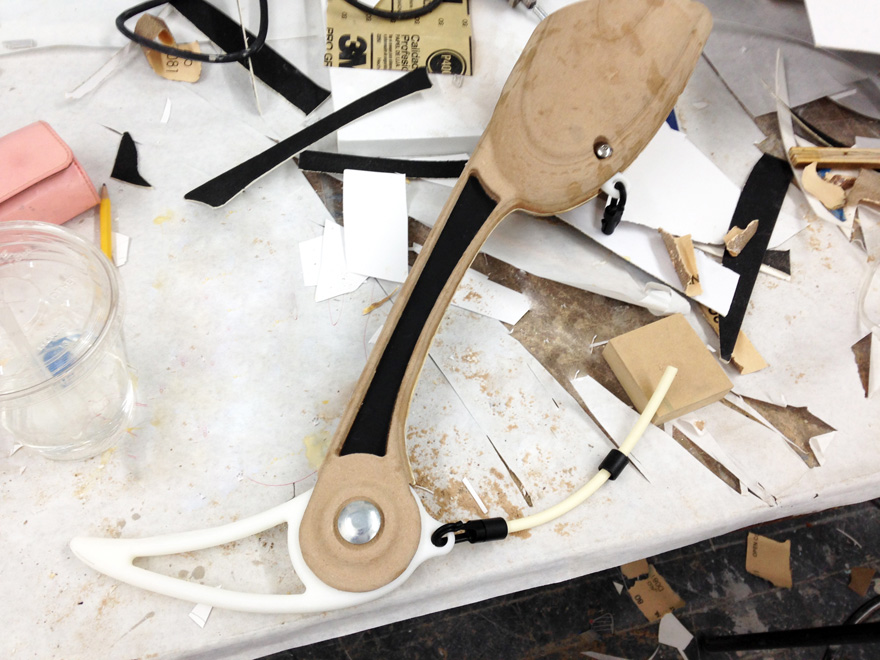 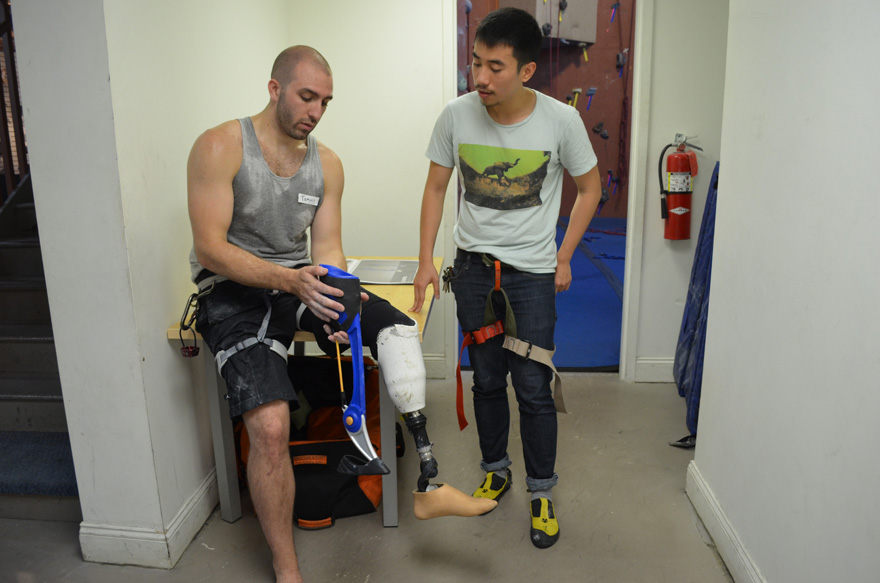 Although Lin hasn't created a functional prototype yet, he is currently in the process of contacting clinics and looking for patients willing to collaborate with him. "It is a big project, so it's going to take a while," he says. A few challenges he foresees include adding a customizable socket for the different amputations and an adjustable height for each user—problems that don't worry him too much, as they have already been solved by many existing prosthetics on the market. The designer envisions the final version of KLIPPA being made from fiberglass, to make it light and strong, with a rubber foot.

In the meantime, Lin still has to finish school. "I'm currently taking a medical-device class and am designing a colostomy bag," he says. "Those sort of 'real' problems—where I can find people out there and talk to them and interview them—really interest me." When he graduates next May, Lin hopes to land at a design firm "that really cares about the end-users and is not afraid of doing experiments and testing, doing a lot of research in the field. That's what I'm looking for."